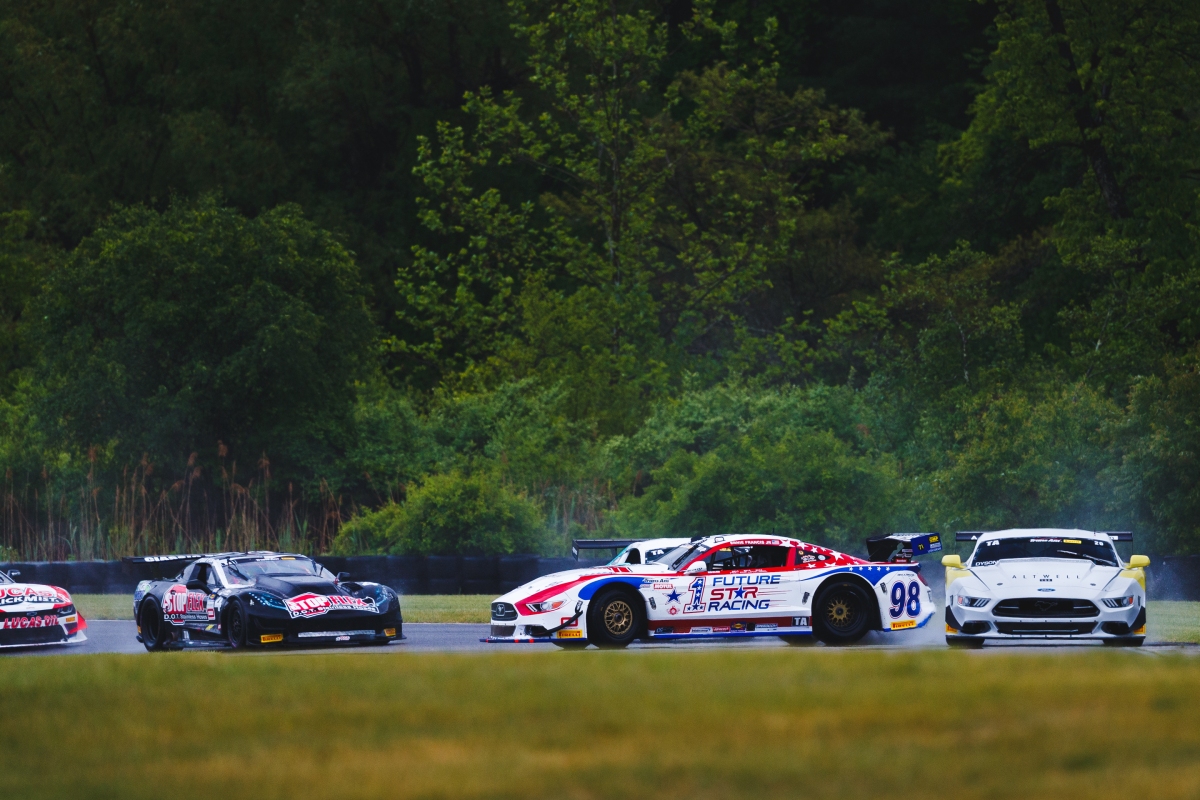 Was really excited for my second day at the Trans Am Memorial Day Classic at Lime Rock, especially with rain forecasted, which always makes for challenging race and photography conditions. Hope you like the photos.

After parking the car at the Midway parking area, looked up into the overcast sky and it looked like the rain would hold off, and headed down the hill to the inside of the Lefthander part of the track for the 11.05 am TA2 Optional Testing. Tried to get as low as possible for head on shots of the cars as they entered the Lefthander and waited for as long as possible until the cars where perpendicular to me before pushing the shutter button, just before they started to turn left. Head on with the #5 Silver Hare Racing Ford Mustang and #3 Hawk Performance/F.A.S.T. Auto Chevrolet Camaro, with water from the damp track spraying from their bodywork.

As the session progressed, light rain started to fall, leading to the accumulation of more water on the track. The #3 Hawk Performance/F.A.S.T. Auto Chevrolet Camaro following other TA2 cars into the Righthander.

With more water on the track, the cars were finding it more challenging to stay on the track, with one car going off and needing a tow back to the paddock.

Always enjoy watching the cars speed “through the grass” as they navigate the Lefhander. The #92 DMMtrsprts/HeritageAuto/SLR-M1 Chevrolet Camaro (upper photo) and #10 BC Race Cars Chevrolet Camaro (lower photo).

With more rain coming down, and the track getting more wet, prominent “rooster tails” streamed behind the cars.

You can really appreciate the speed of the cars as they fly into the Righthander. The #3 Hawk Performance/F.A.S.T. Auto Chevrolet Camaro (upper photo) and #05 The Autosport Group Chevrolet Camaro (lower photo). By the time the session ended, I was starting to get cold from the low temperature and rain, so headed back to the car to put on another jacket, my rain pants, have some food and warm up; before the race.

Before leaving the car thought about my plan on the locations to photograph the 68 lap (or 65 minute) TA/XGT/SGT/GT race. Decided to capture the start of the race at the inside of the Left-hander, walk down to the inside of Big Bend, cross the bridge to the outside of the front straight, then back to the podium for the end of the race. With the race scheduled to start at 1.20 pm, headed down the hill to the Lefthander for the start, for some head on shots of the cars as they bunch up as they enter this part of the track, just in case something unexpected happens. As the cars came into the Lefthander the #98 Future Star Racing Ford Mustang spun through the pack of cars, narrowly missing Chris Dyson in the #20 Plaid Ford Mustang who was able to get around the rear of the spinning car. This was a close call for the eventual race winner.

Through the Lefthander with the #19 Advanced Composite Products Inc. Cadillac CTS-V.

Around Big Bend with the #23 McNicholsCo/Cornertech CNC Solut Chevrolet Corvette.

After several laps, crossed the pedestrian bridge to the outfield spectator area, and walked up the stairs in the hill, towards the left side of the bridge. First went for some shots of the cars speeding down Sam Posey straight. Tried to capture multiple cars in the same frame. The #59 The Peter Gregg Foundation Chevrolet Camaro leading the #8 Lucas Oil Chevrolet Camaro.

Then looked to my left, and over the paddock area, for some shots of the cars going between the Lefthander and Righthander in front of the spectator hill. The #10 Good Boy Bob Coffee Roasters Porsche 991 GT3 R.

Next, looked down to the Sam Posey Straight and noticed how the cars after they go under the pedestrian bridge went behind a wall of trees. So tried for some artsy shots of the cars going behind these trees. The physics of photography and light are amazing, especially when shooting at low shutter speeds, since you can make still objects “disappear” or nearly. Once again, missed a lot of shots, but managed to get one. The #5 Franklin Road Apparel Chevrolet Camaro.

However, a moment later, heard a noise, and looked up, to see the #5 Franklin Road Apparel Chevrolet Camaro in the wall at the apex of Big Bend. It didn’t take long for the safety crew to arrive, and the driver was okay.

With only a few laps remaining headed to the paddock to capture the winners at the podium. Chris Dyson won the race in the #20 Plaid Ford Mustang, and showed his excitement for the win as soon as he got out of the car. This was a very popular win, and was great to hear all the spectators cheering.

Was great to see the camaraderie between the winner Chris Dyson (middle), Tomy Drissi in the #8 Lucas Oil Chevrolet Camaro who was second (left), and Andy Lally in the #21 Amamos LaVida Tequilla Ford Mustang who came third (right)

Was great watching Tomy Drisso run up to the spectators to give a cap to one of the children.

Chris Dyson, after being announced the race winner on his way to the podium.

Was a great race, but there was still one more session to go, with TA2 practice at 4.00 pm, so headed to the top of the circuit to the outside of West Bend. After crossing the bridge went to the right of the road which overlooks the Downhill. For this shot of the #5 Silver Hare Racing Ford Mustang, wanted to capture the wide expanse of this part of the track and the speed the cars reach.

Next tried to capture the cars as they reached the bottom of the Downhill after racing under the treelined side of the track. A couple of shots of the #01 BarkauCars.com / Barkau CDJR Dodge Challenger.

Also tried to get a shot of the cars as they passed below the treelined side of the track just before they reached the bottom of the Downhill. This was a really hard shot due to the speed of the cars and the little time you have to react. Had to rely on the noise of the car to know how close it was and to use multiple frames per second. Was probably a fraction of a second too late for this shot, since would have liked more of the car in the frame. Will keep practicing this type of shot. Next time.

Finished the session by going over to the outside of West Bend. Shooting from the spectator side of the fence can make it challenging to get low front shots of the cars. However, found a location on the spectators side of the fence behind the safety marshall’s stand where you can “shoot through the fence” and get some head-on shots of the cars as they race into the straight at West Bend.

Had a great time at Lime Rock Park and was good to be back at the track. Also, was great to see some other photographers that I hadn’t seen for a while. Thanks for spending your time reading this blog.

Like a lot of race fans, its been a while since I have been to a race track to see a motorsport event. It’s great that things have been getting better, which has allowed spectators to return to the race track. The last time I’d been to Lime Rock Park was in July 2019, so you could imagine how excited I was to be able to return to Lime Rock Park for the Trans Am Memorial Day Classic. Hope you like the photos.

Left Boston at around 7.30 am for the approximately 3 hour drive to Lime Rock Park in upper Connecticut. Despite a forecast of cloudy skies with rain, was very excited to be at the race track. Parked the car in the Midway field area, and as soon as I opened the door to the car I could hear the familiar noise of race cars, which put a smile on my face. Since I was photographing from the spectator side of the fence, decided to take a backpack to hold my camera gear, wet weather clothing, rain covers for my camera and lenses, food and water.

With the overcast skies, the light was very diffuse, so it didn’t really matter which part of the track I went, but decided to walk up the hill to the inside of West Bend at the top of the track.

The optional testing session for the TA/XGT/SGT/GT class started at 11.45 am, so got into position for photographing some 3/4 rear away shots of the cars as they sped along West Bend to the downhill under the car bridge. In a way, this was also a test session for me, since its been about 20 months since I’ve photographed a motorsport event. Here’s the #59 The Peter Gregg Foundation Chevrolet Camaro with its brilliant metallic red paint work.

With the session finishing at 12.25 pm, it was time for lunch, so headed down the hill to the paddock area.

The heavy overcast skies looked very ominous for the afternoon sessions, with rain forecasted. Should also mention, that despite having my lunch in my backpack, decided to grab a freshly made and hot bratwurst roll. This is one of the things I always try to do when visiting Lime Rock Park, the bratwurst rolls really taste delicious.

For the 2.20 pm TA/XGT/SGT/GT practice session, went to the paddock area on the inside of the Lefthander. This is one of my favorite locations to photograph from, since you can get shots of the cars, which appear to be “racing on the grass”. The #4 StopFlex.com/CarCoachReports Chevrolet Corvette.

You can turn to your right and get rear shots of the cars as they exit the Lefthander into the Righthander. Tomy Drissi in the #8 Lucas Oil Chevrolet Camaro.

Rain was expected for the TA qualifying session at 5.40 pm, so thought about where to go so could get shots of the cars with water from the rain spraying from the rear of them. Decided to go to the top of The Uphill, then walk along the straight to West Bend. Some shots of #59 The Peter Gregg Foundation Chevrolet Camaro.

By the time the qualifying session ended at 5.55 pm, was looking forward to getting something hot to eat for dinner and dry clothes, so headed back to the car for the drive to the hotel I was staying at in Lennox, Massachusetts. When I got to the hotel, one of the first things I did was to air out my wet camera gear. Looking forward to Saturday for a full day of Trans Am. Thanks for spending your time reading this blog.

A couple of weekends ago went to Lime Rock Park for the Trans Am Memorial Day Classic. It was great to see and hear the roar of muscle cars including Camaro’s and Mustang’s. Hope you like the photos. END_OF_DOCUMENT_TOKEN_TO_BE_REPLACED

The last part of my 2014 year in motorsports photography will focus on the second half of the Pirelli World Challenge (PWC) season, as well as Indy Car, and races held at Lime Rock Park. As I reflect back, I think wow, what a great experience and learning opportunity this was. Thanks again to those who gave me the chance and helped me through the year. Looking forward to the 2015 season and the second year of my “apprenticeship”. Hope you like the photos.