The second day at the Northeast GP at Lime Rock Park (July 22) was a busy day with back-to-back morning and afternoon practice sessions and qualifying for the IMSA WeatherTech Sportscar Championship and Continental Tire Sportscar Challenge. Hope you like the photos.

Arrived at the track early to give myself time to get my camera gear together and work out my photo shooting plan before the 9 am photo meeting. For the morning practice sessions headed to the outside of Big Bend (Turn 1), since the morning sun would illuminate the front and left-hand side of the cars. To get to this part of the circuit, you need to cross the track when its “cold” and get permission from the safety marshall that its okay to cross. 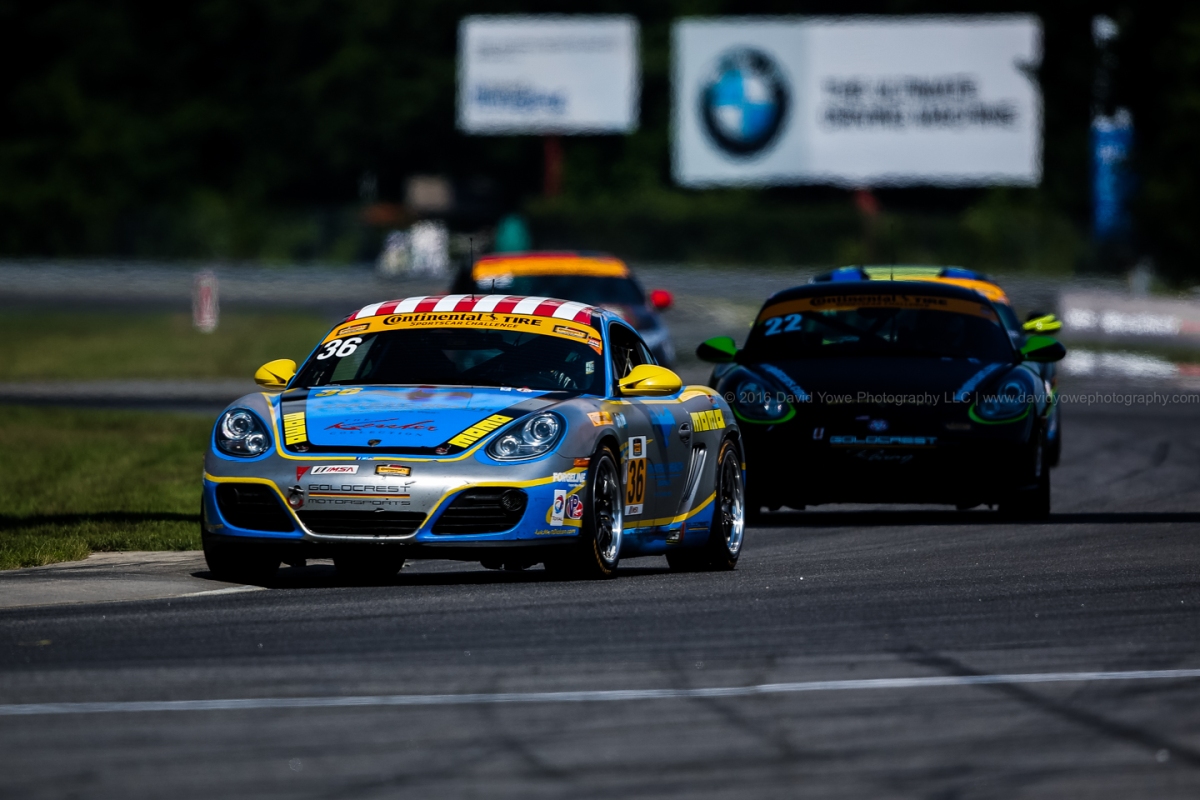 The Continental Tire Challenge practice session #1 started at 10 am. At Turn 1 with Matthew Dicken or Corey Lewis in the #36 Strategic Wealth Racing Porsche Cayman. 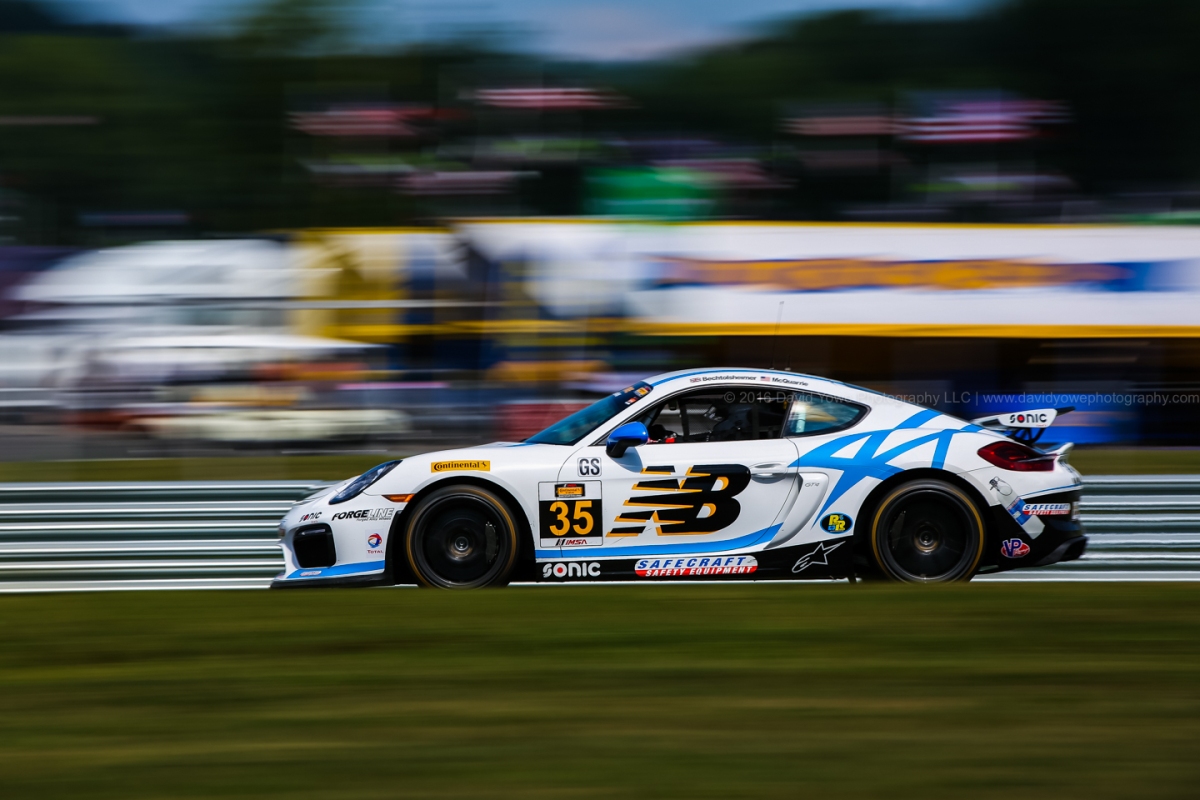 Tyler McQuarrie or Till Bechtolscheimer in the #35 CJ Wilson Racing Porsche Cayman GT4.

Even though it was still early in the day, spectators were avoiding the direct sun by sitting in the shade on the hill over looking the Esses. 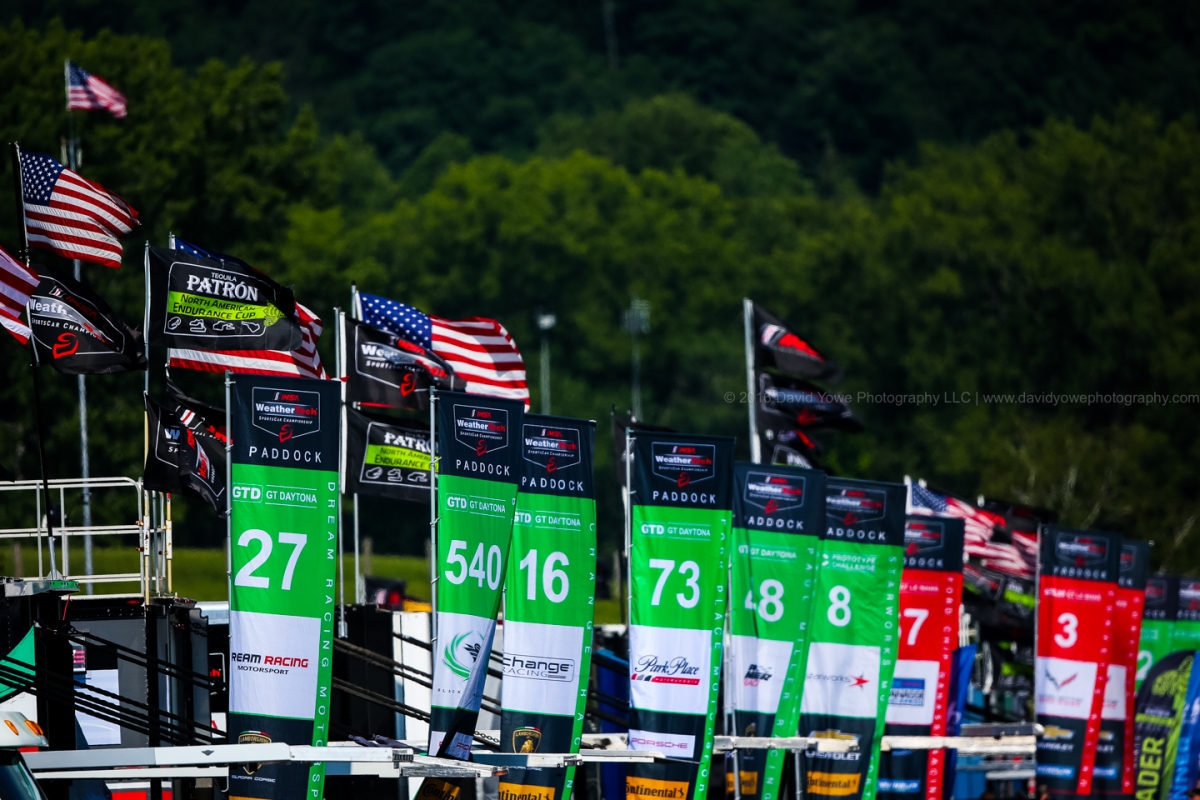 The Stars and Stripes and team flags were waving in the gentle morning breeze.

Green flag for the start of the WeatherTech Championship practice session #1.

Here’s a few wide-angle shots of Turn 1 to give you an idea of what it looks like as it starts at the end of the front straight and leads into the Esses.

Head-to-head with Ben Keating or Jeroen Bleekemolen in the #33 Riley Motorsports Dodge Viper GT3-R and a North America Porsche 911 RSR.

Was a lucky shot to get Michael Marsal or Markus Palttala in the #97 Turner Motorsport BMW M6 GT3 speeding past their paddock garage in the background.

Tried some artsy shots by using very slow shutter speeds while panning. Missed a lot of shots, but managed to get one at 1/5 sec. I guess the car could be sharper, and will work on this next time I’m at the track.

Into the Esses with Oliver Gavin or Tommy Milner in the #4 Corvette Racing Corvette C7.R.

Towards the end of the session a “funny” think happened. I’d left my 500mm lens and shoulder bag on the grass. Another photographer asked me “is that your camera gear over there”, I said “yes”, then he told me how he saw a small snake around it, but said “it didn’t look poisonous”. After thanking the other photographer for letting me know about the snake, I went over to my camera gear on the grass and carefully used my foot to kick my lens and camera bag, then looked inside the bag. Lucky for me the snake decided not to stay around. 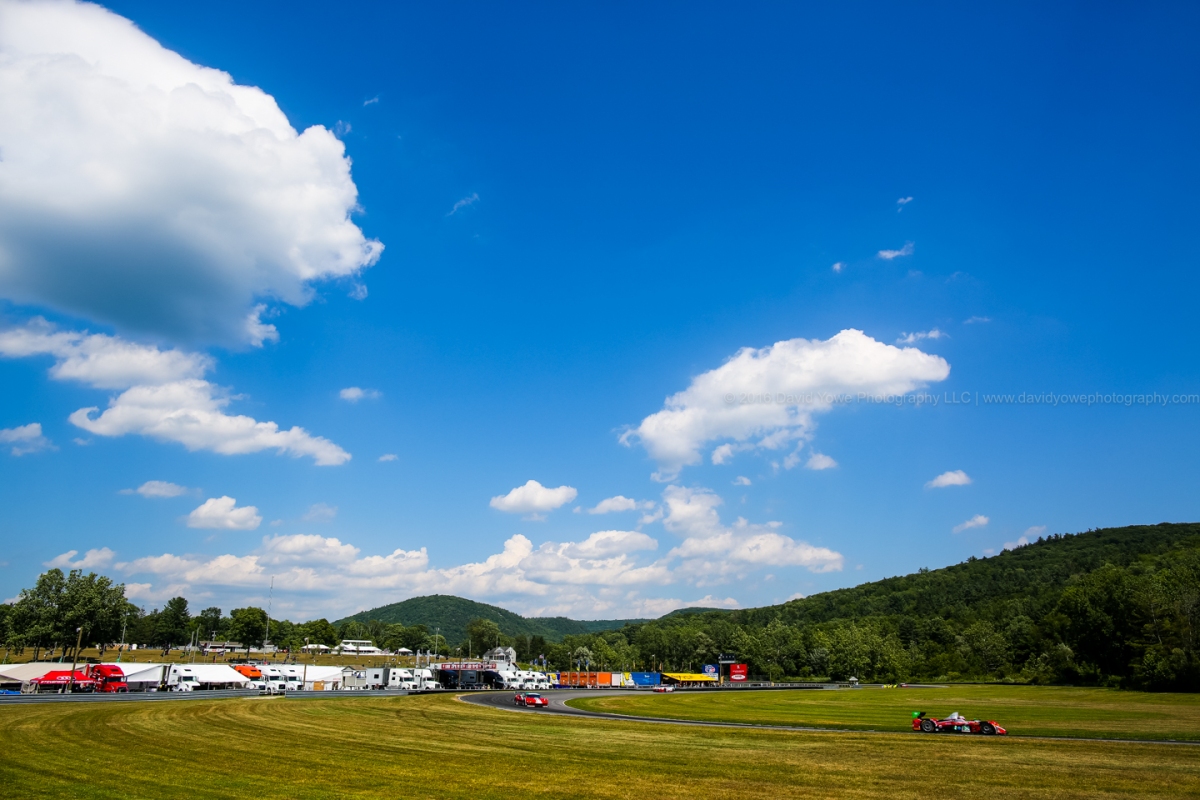 The second practice session started mid-afternoon at 2.05 pm. For this session stayed on the inside of the Esses (drivers right) starting at Turn 2, then worked my way to Turns 3 to 4. This is a great part of the track to get a variety of shots ranging from front, rear, and side pans. 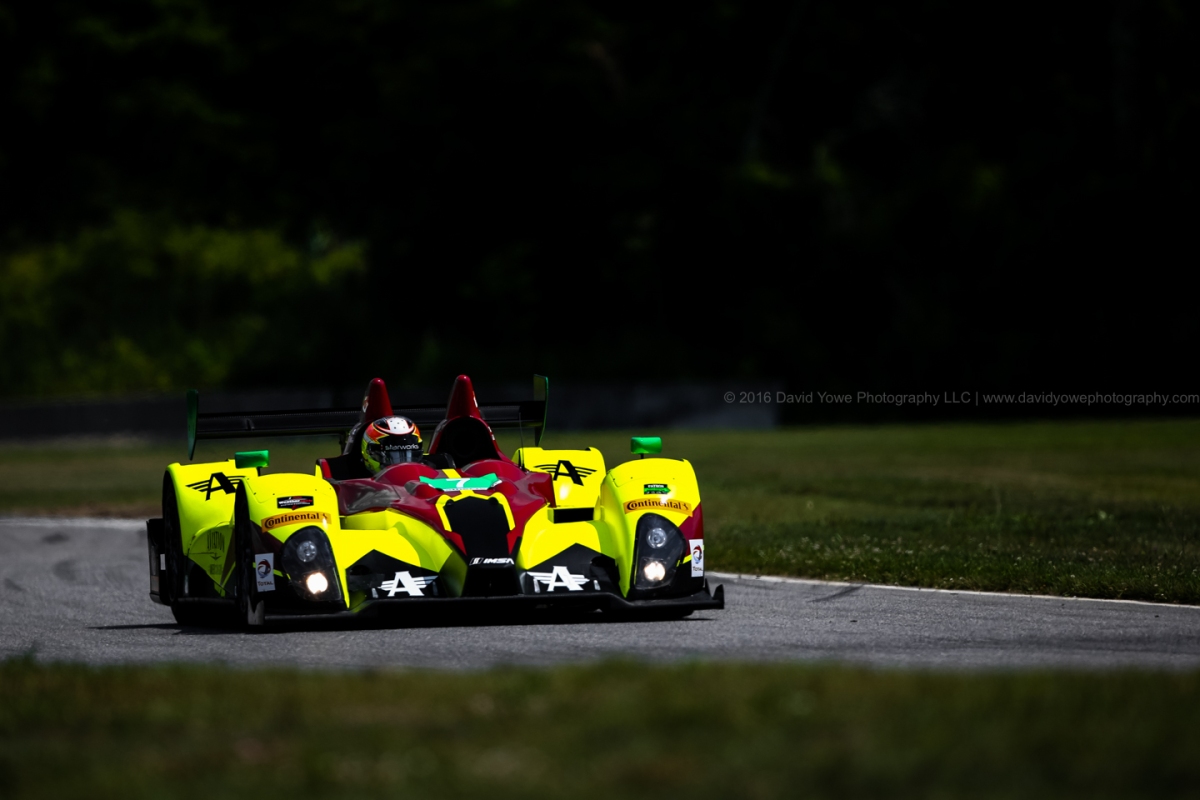 Really liked the day-glo yellow livery on this PC car. 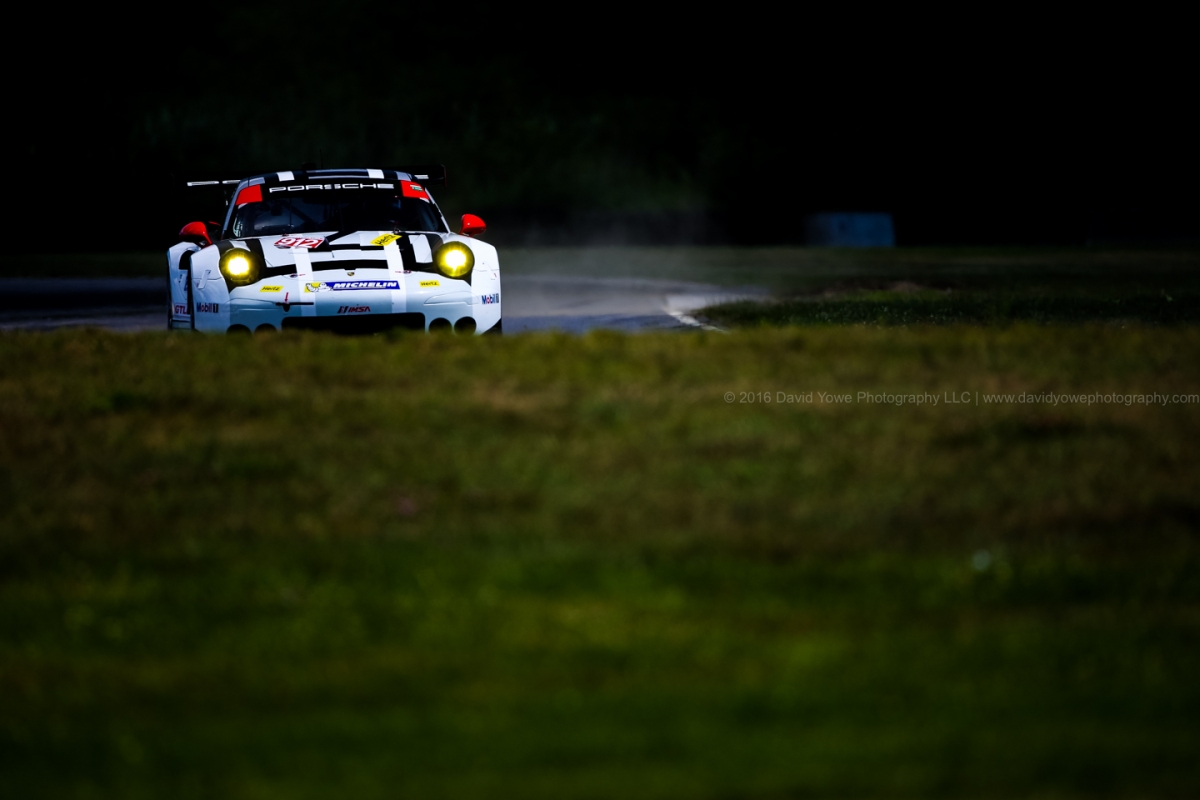 Sometimes the cars take the entry into Turn 2 wide and hit the dirt, creating a cloud of dust. Michael Marsal or Markus Palttala in the #97 Turner Motorsport BMW M6 GT3.

As you walk around Turn 3, their’s a location where it looks like the cars are “speeding through the grass”. Matthew McMurry or Johnny Mowlem in the #20 BAR1 Motorsports ORECA FLM09.

At Turn 3 with John Potter or Andy Lally in the #44 Magnus Racing Audi R8 LMS GT3.

Between the Turn 3 to 4 straight with Mark Kvamme or Remo Ruscitti in the #88 Starworks Motorsport ORECA FLM09. 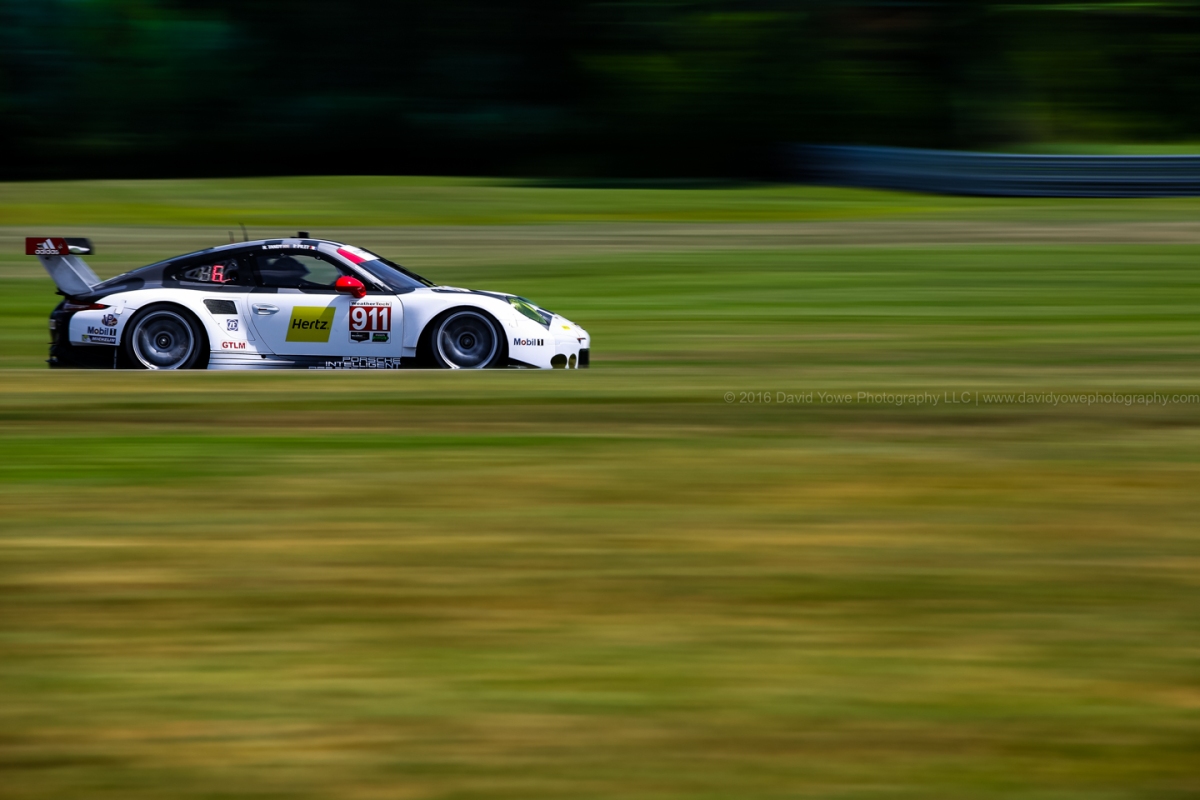 Afternoon qualifying started at 3.30 pm, first with GTD, followed by GTLM, then PC. For this session stayed in the pits. Christina Nielsen, one of the #63 Scuderia Corsa Ferrari 488 GT3 drivers.

Michael Marsal getting ready for qualifying in the #97 Turner Motorsport BMW M6 GT3. 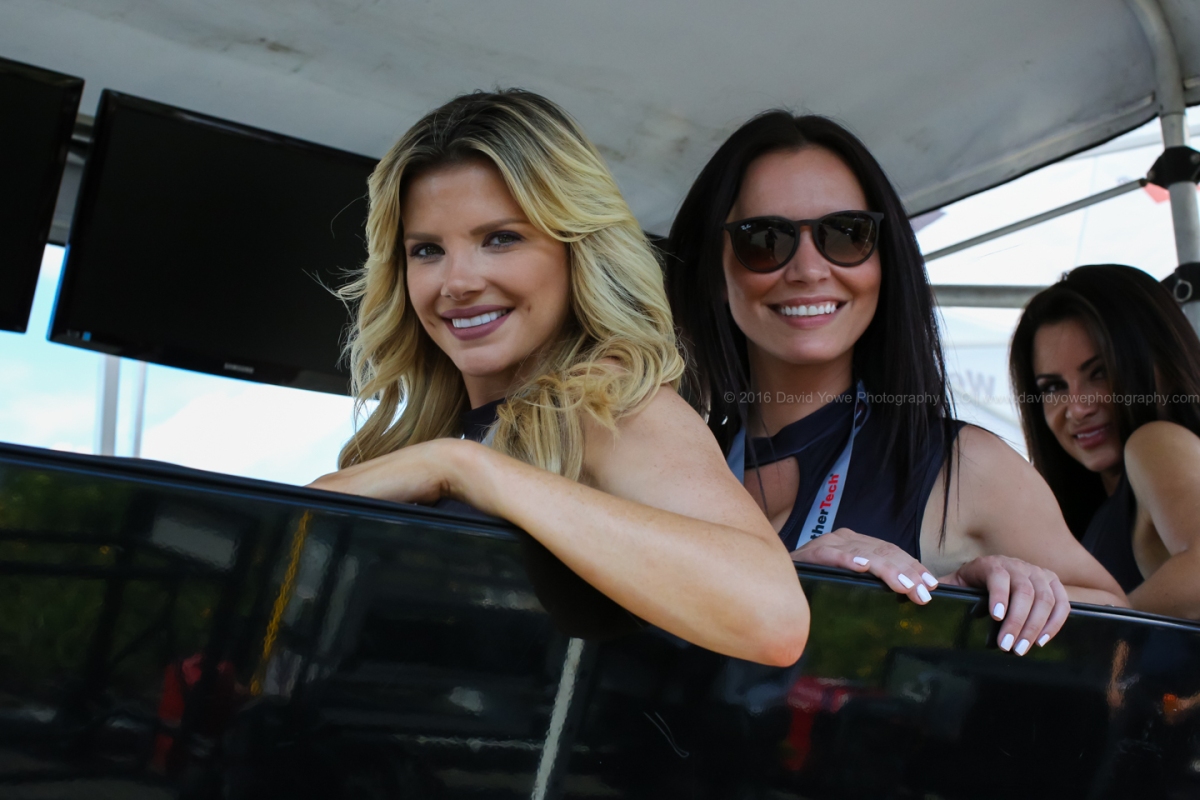 The lovely WeatherTech promotional girls were in the pit area ready to watch the #22 Alex Job Racing Porsche 911 GT3R. 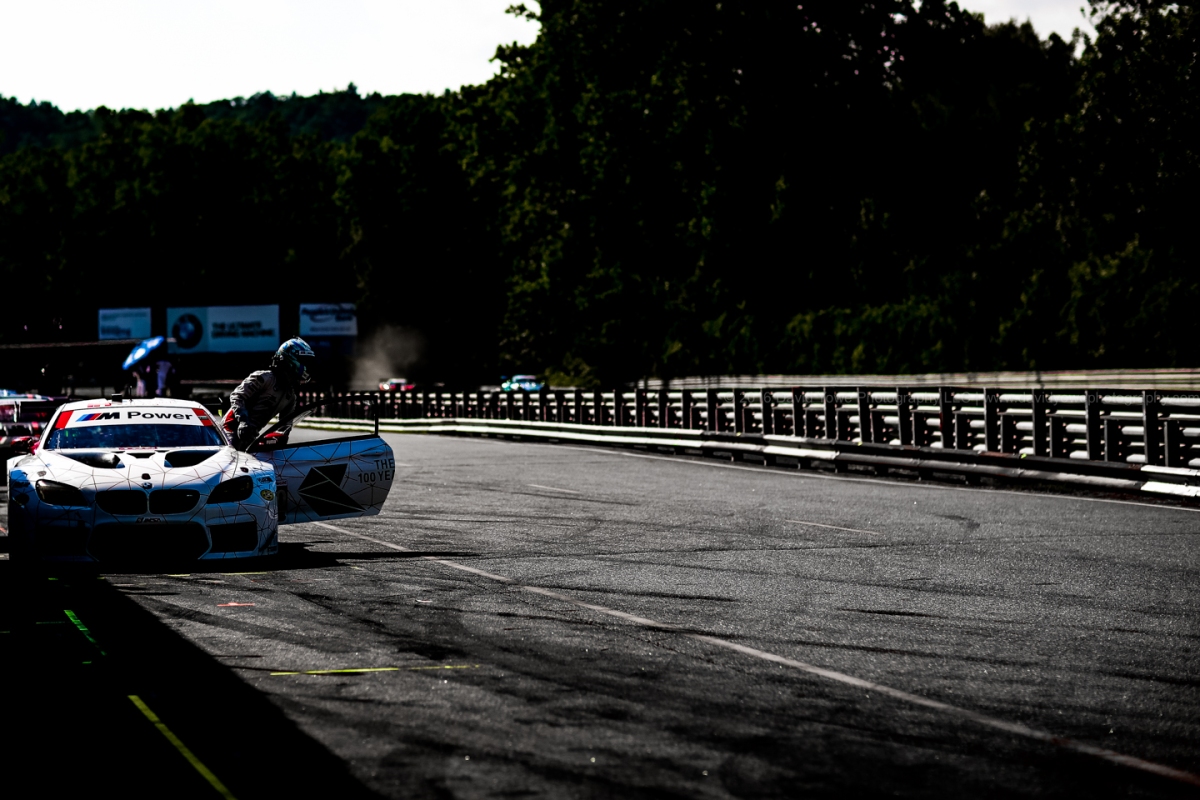 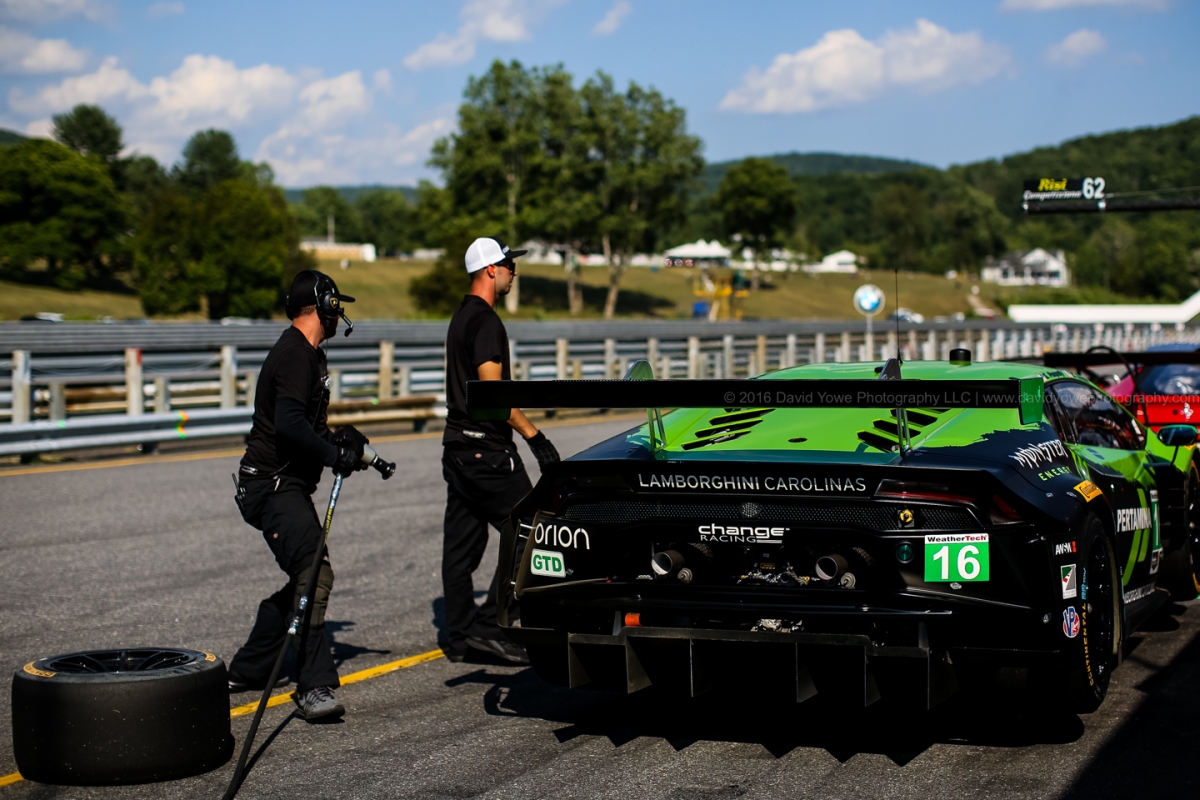