For the 9.05 am warm-up session, headed over to the outside of The Right Hander at Turn 4 (drivers left). At this time of day the light is still relatively low and diffuse. Here’s a view of the paddock from this location, with Turn 3 in the foreground.

The low morning light really made the colors of the grass and livery on the cars “pop”. Tom Kimber-Smith or Robert Alon in the #52 PR1/Mathiasen Motorsports ORECA FLM09. 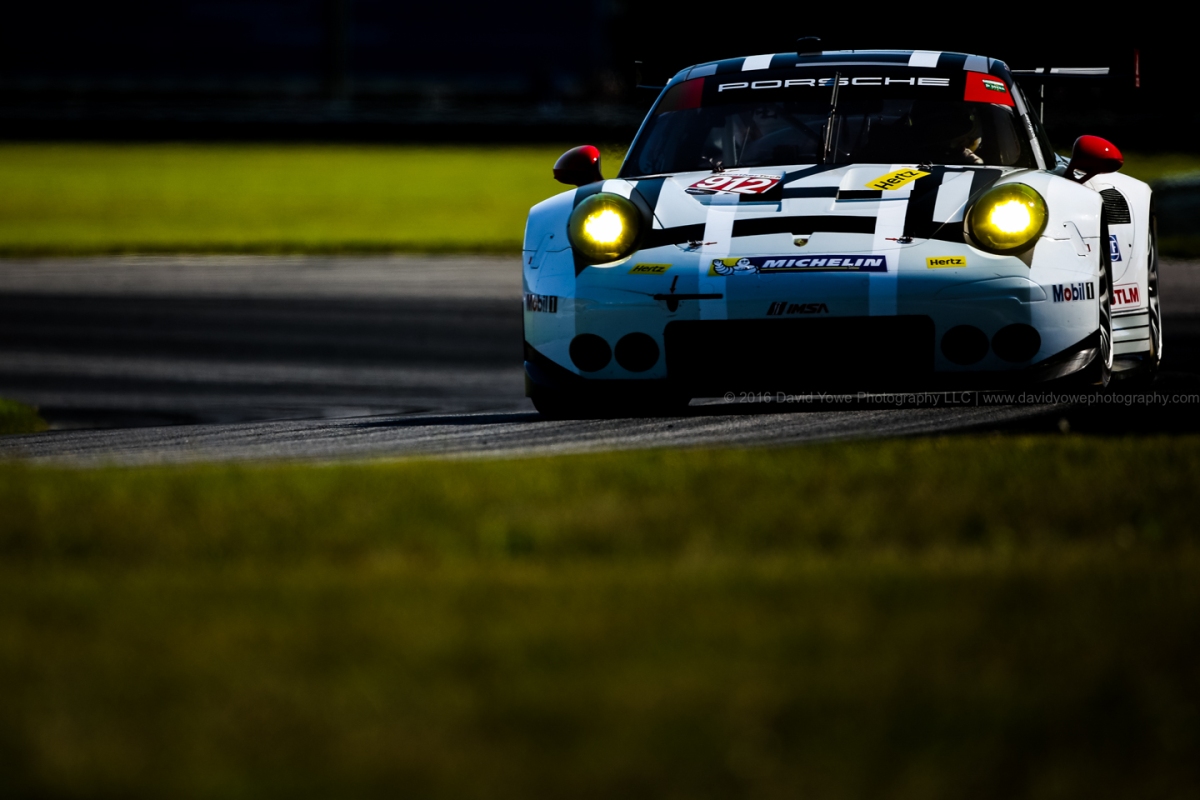 On the way back to the media center, walked through the paddock to capture some of the ambiance of todays event. Fans have a great view of the track from the infield spectator area hill which overlooks The Esses. I think this is one of the best places to watch the race, since you have the beautiful mountains in the background, trees for shade, and vendor stands close by.

Some beautiful Bimmers all in a row in the Midway. 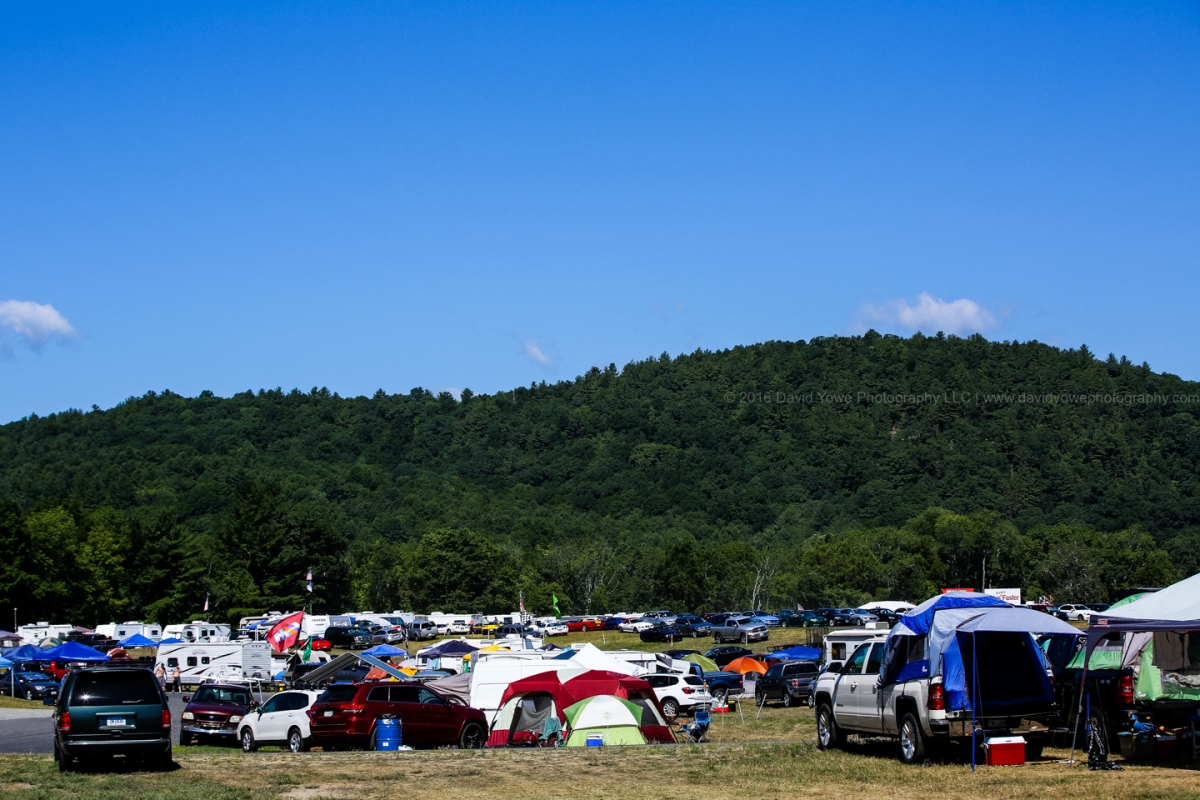 Many of the race fans camp at the track, which is a great way to spend time with family and friends.

Headed down to the team transporters for the 11.30 am drivers autographs session.

Was great to see a large crowd on hand for the driver autograph session.

Tommy Milner, one of the #4 Corvette Racing Corvette C7.R drivers. 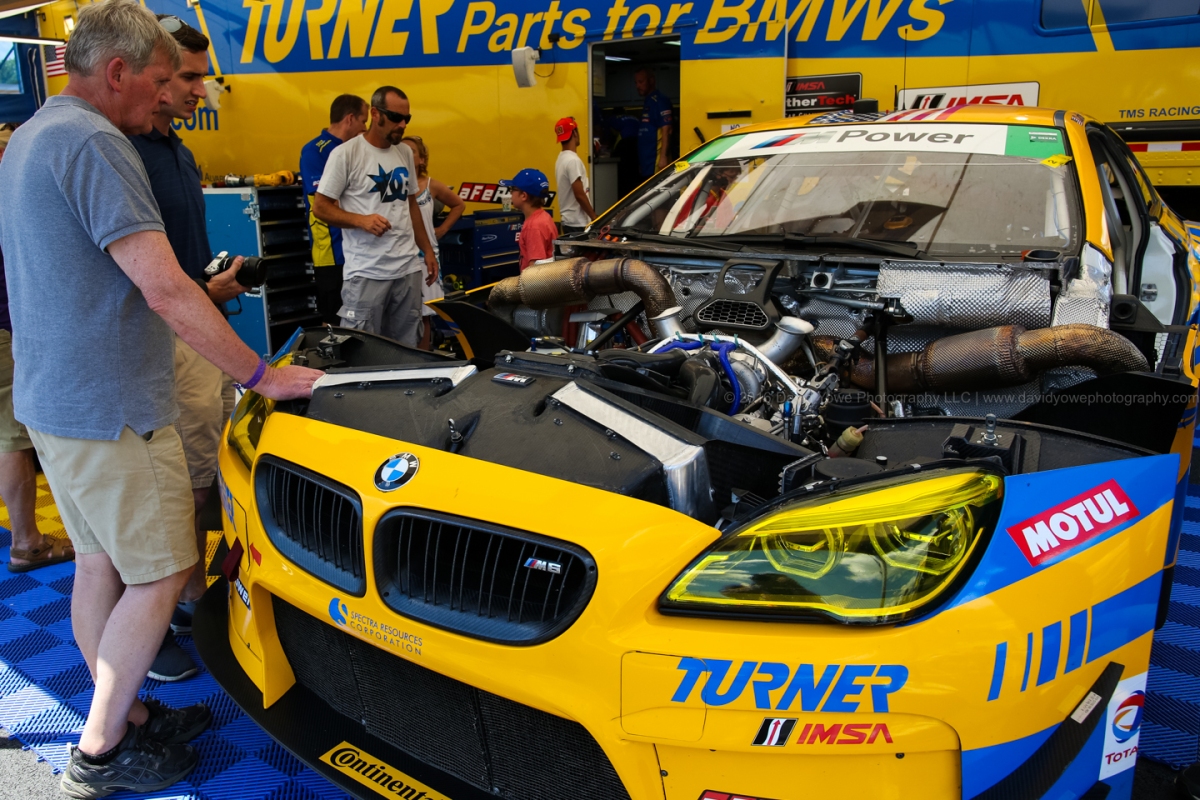 Fans getting up close to one of the Turner Motorsport BMW M6 GT3’s. 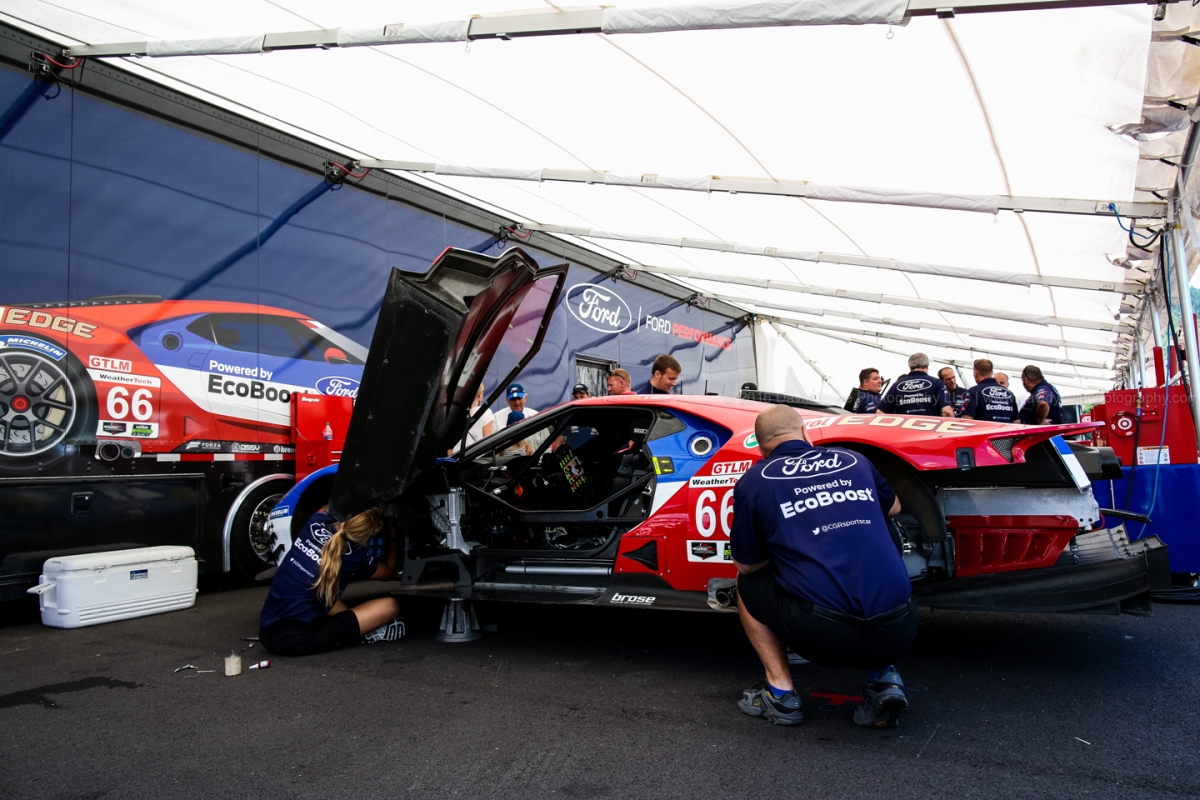 The pre-grid fan walk started at 1.40 pm. At the start of the grid was the #38 Performance Tech Motorsports ORECA FLM09.

Was great to see a lot of race fans taking the opportunity to get a close look at the cars. 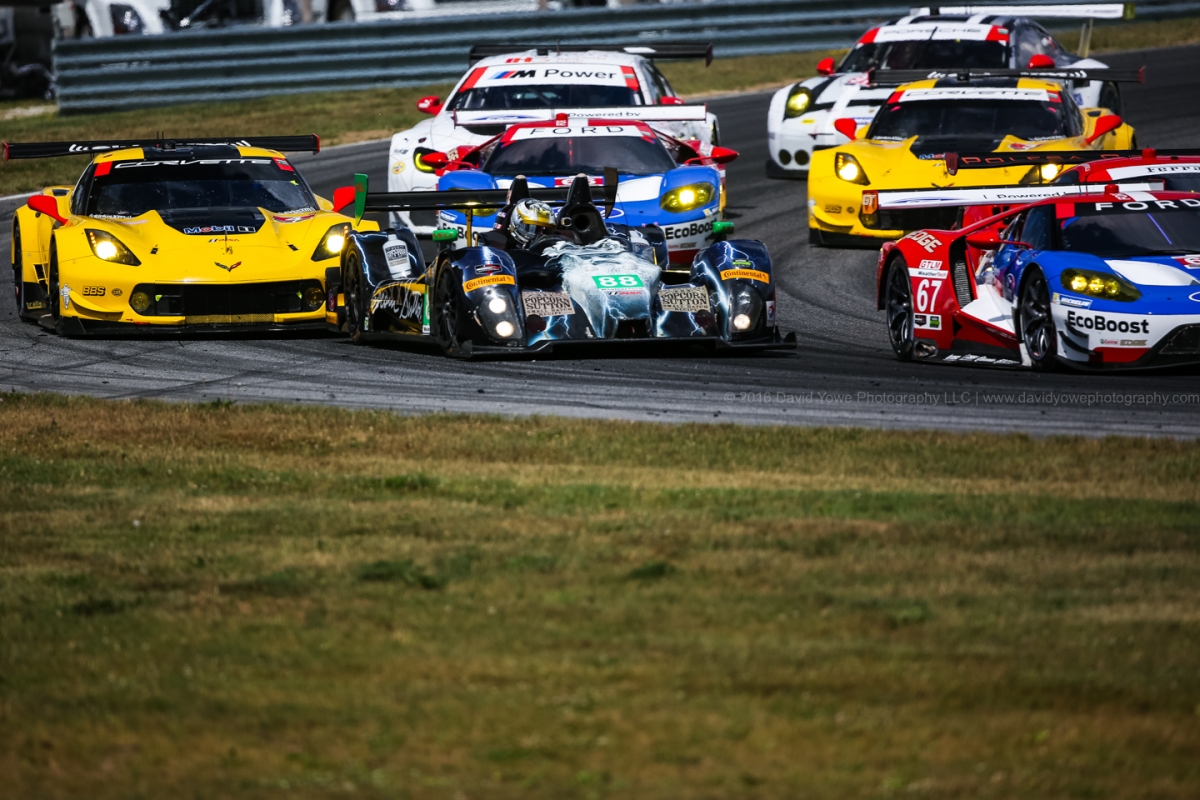 Left the pre-grid fan walk early, to give myself enough time to get to The Esses for the race start at 3.05 am. Fans with their cameras ready for the start of the race.

Ryan Briscoe or Richard Westbrook speeding along the Turn 3 to 4 straight in the #67 Ford Chip Ganassi Racing Ford GT. 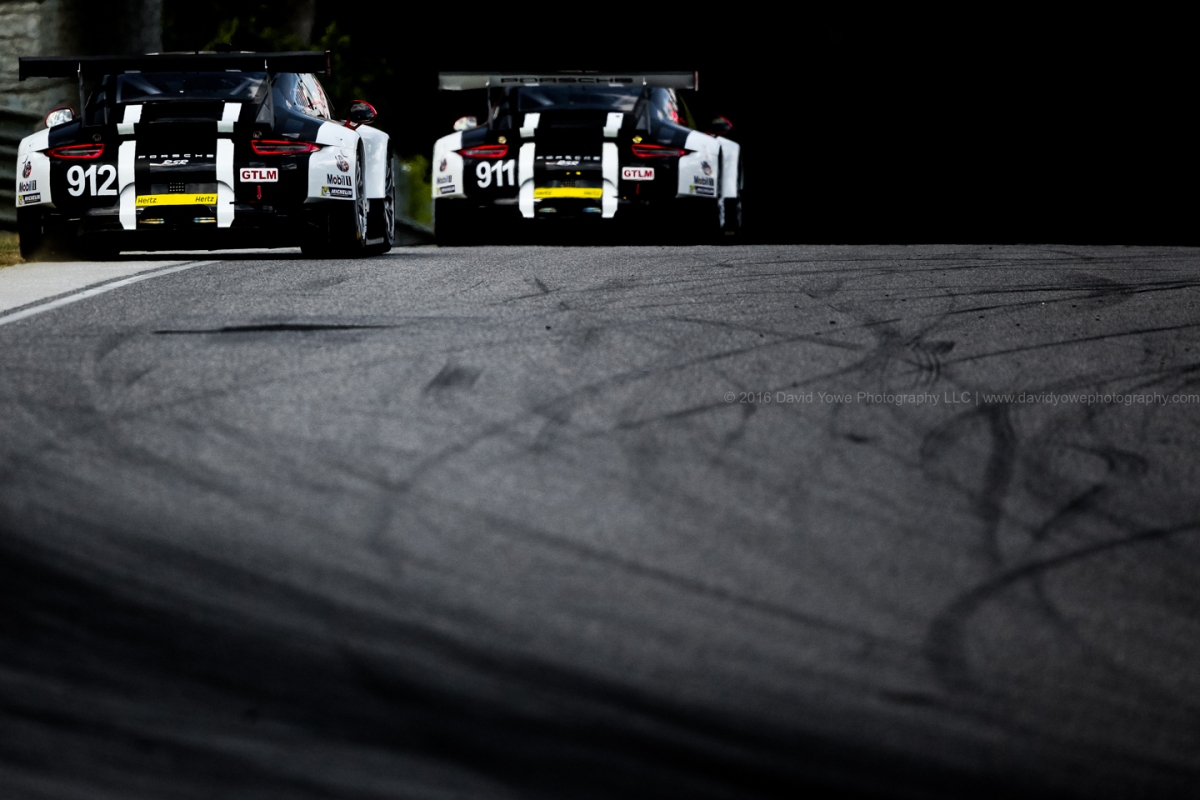 After a few laps, left The Esses and walked to the top of the paddock, where I was able to get a golf cart ride to the outside of West Bend (Turn 6, drivers left). Here’s a shot of the #911 and #912 Porsche North America Porsche 911 RSR’s heading underneath the bridge at the top of the Downhill (Turn 7).

Walked down the outside of the Back Straight to the top of The Uphill, where the cars were using the Turn 5 chicane. This is a very popular spot for fans to watch the race, since you are very close to the action.

At Turn 5 with Oliver Gavin or Tommy Milner who would go on to win the race in the #4 Corvette Racing Corvette C7.R.

Along the Back Straight with Christina Nielsen or Alessandro Balzan in the #63 Scuderia Corsa Ferrari 488 GT3. 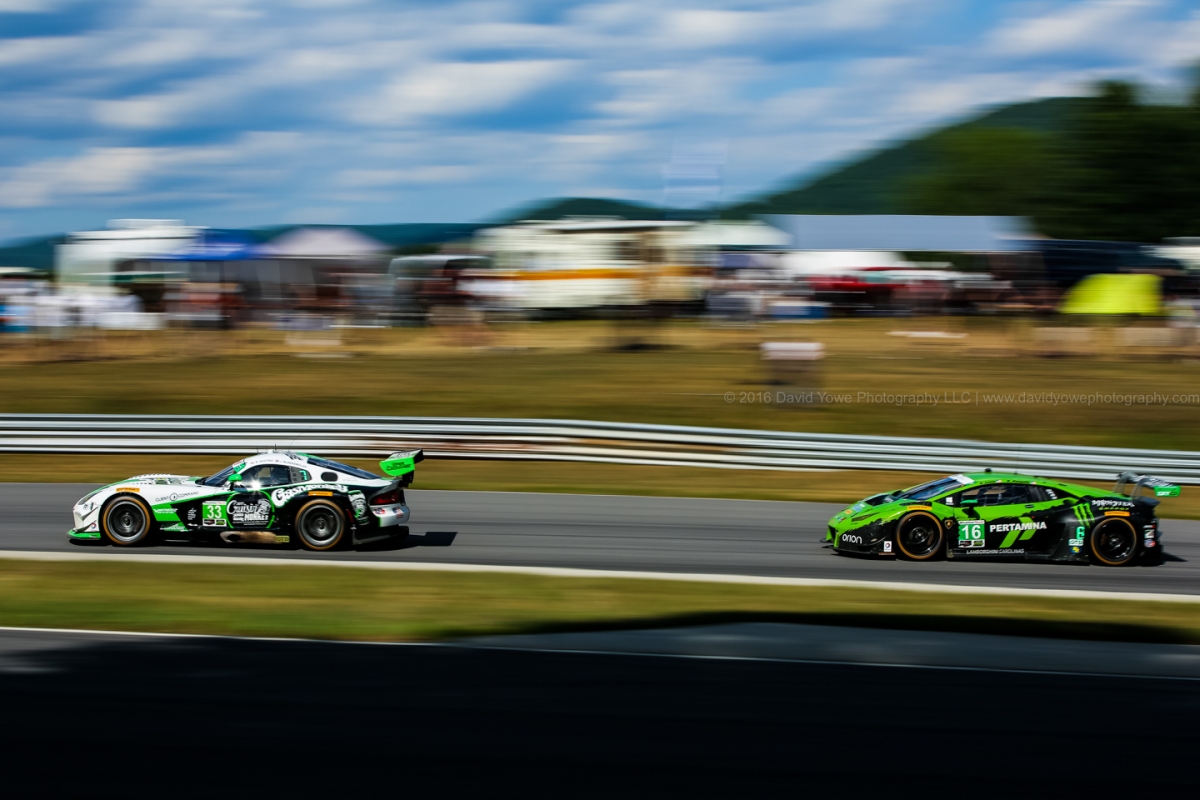 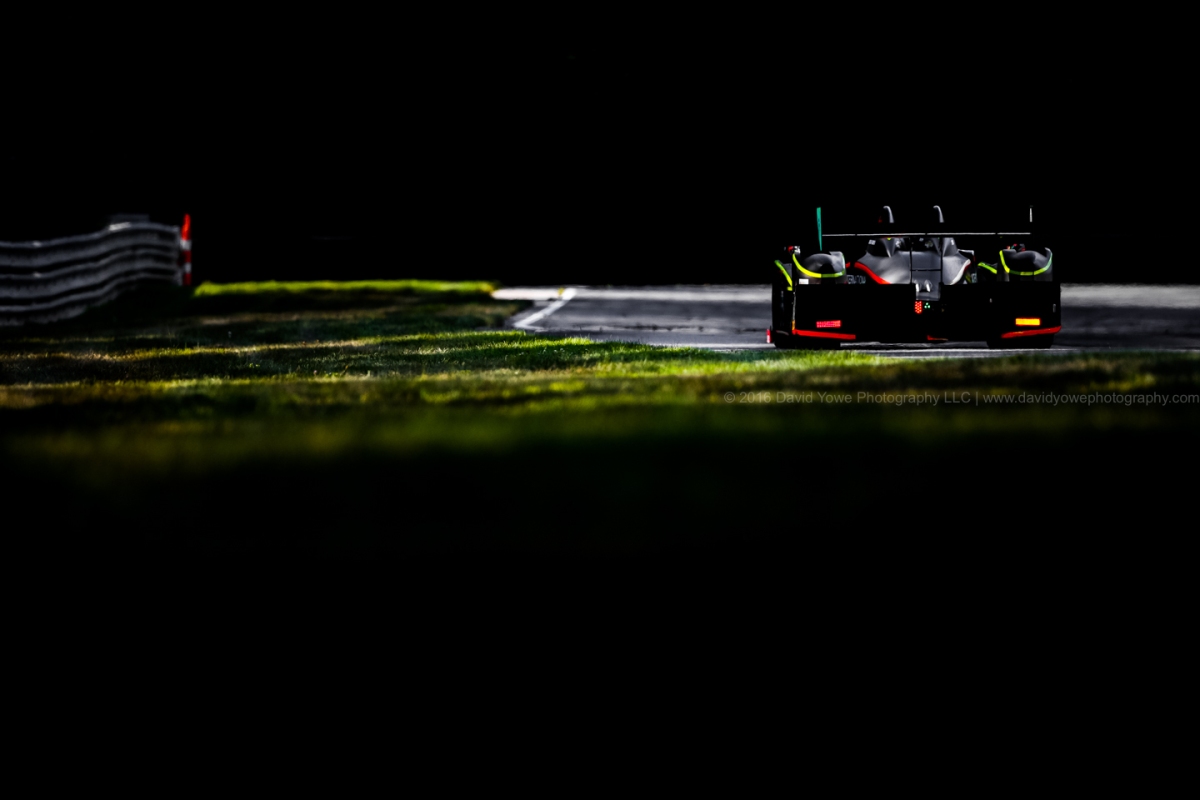 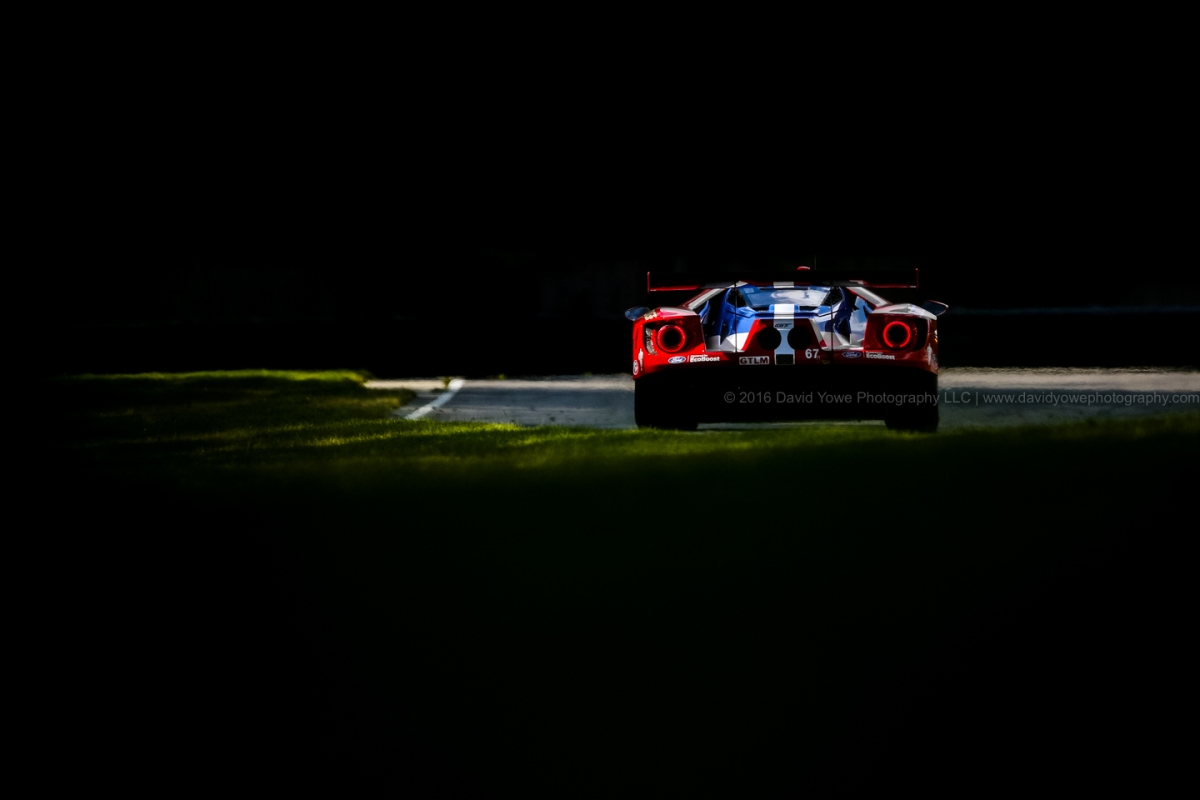 Started my walk back along the Back Straight and noticed how the their was beautiful late afternoon light and shadows being cast over the end of the straight near West Bend. Wanted to get as low as possible for this shot, so walked down the access road hill near the marshalls stand. It was a blind shot since you couldn’t see the cars coming down the straight, and had to react as soon as you saw the cars go through the light and shadows. Tom Kimber-Smith or Robert Alon in the #52 PR1/Mathiasen Motorsports ORECA FLM09 (top), Bret Curtis or Jens Klinsmann in the #96 Turner Motorsport BMW M6 GT3 (middle), and Ryan Briscoe or Richard Westbrook in the #67 Ford Chip Ganassi Racing Ford GT (bottom).

With about 30 minutes until the end of the 2 hour 40 minute race, started to walk back, but another photographer kindly gave me a ride back to the media center. Many thanks for the ride. In the media center, dropped off the 500mm lens, downloaded the pre-grid and race photos to my laptop, then headed to the winners circle for the post-race.

Antonio Garcia and some of the team celebrate second place for the #3 Corvette Racing Corvette C7.R. 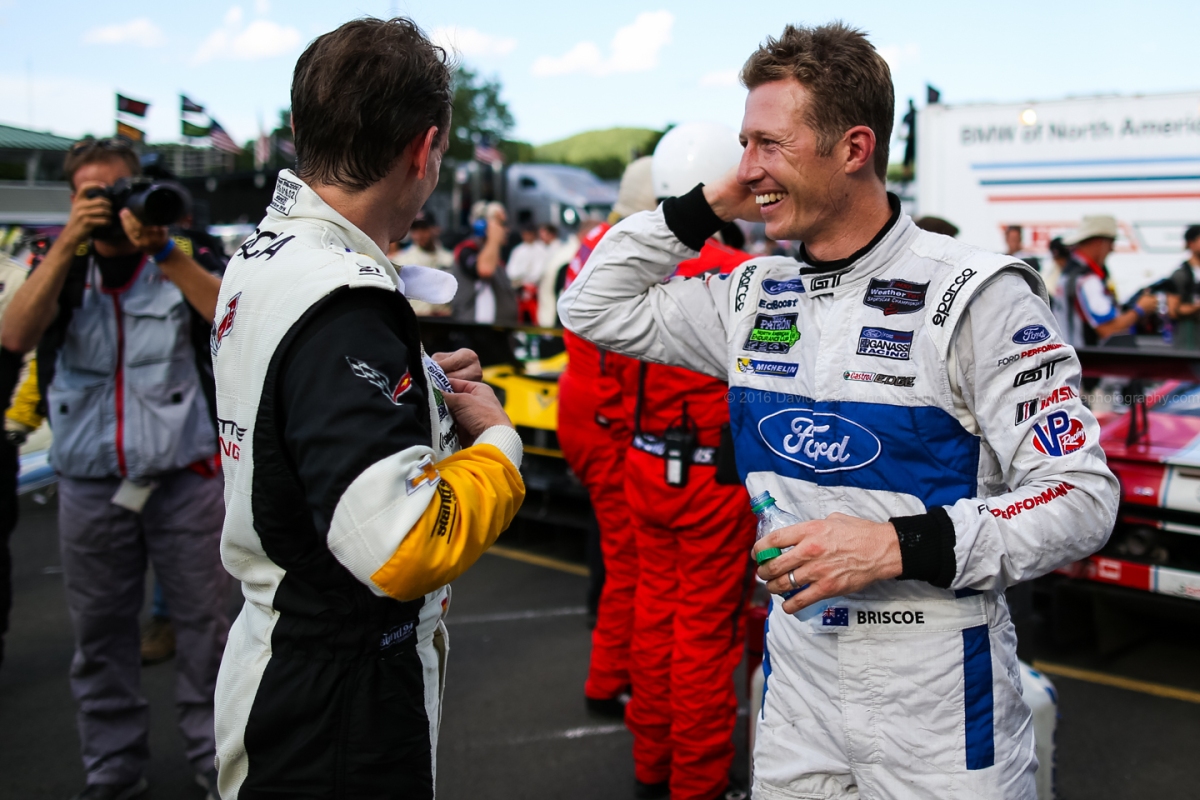 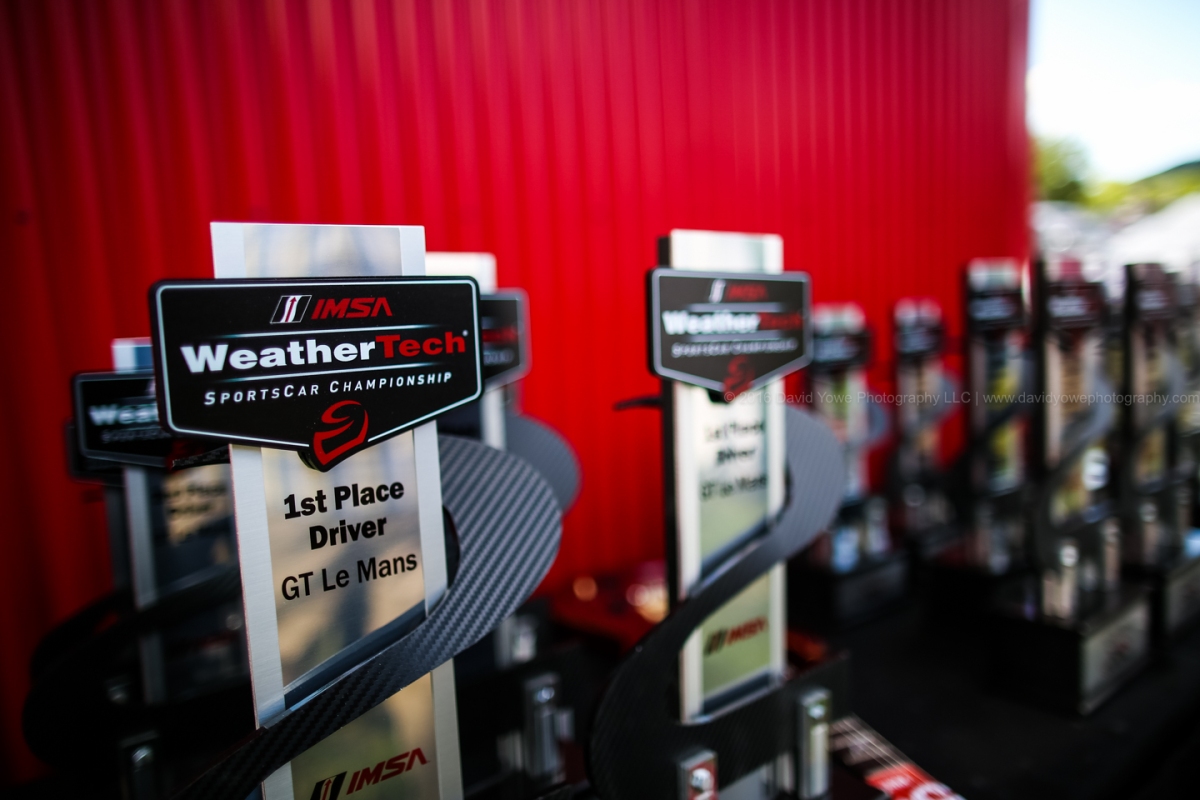 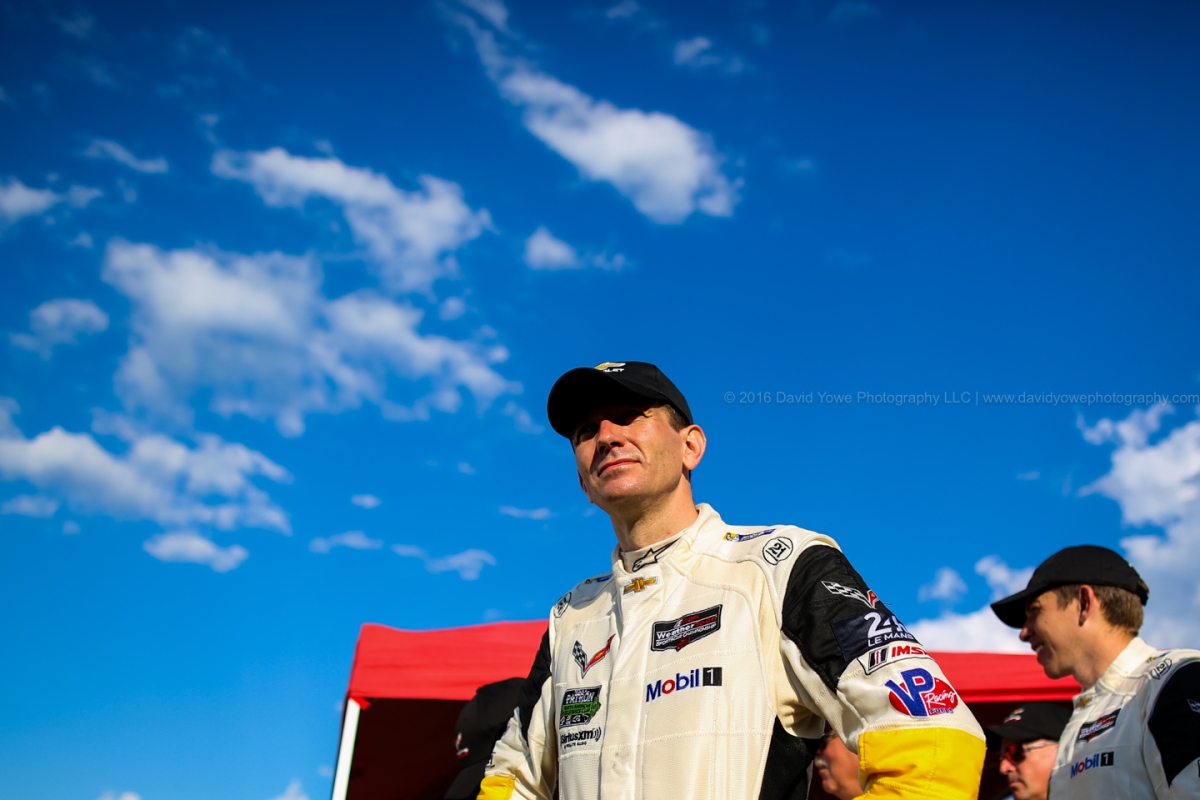 We won the race. Oliver Gavin, one of the drivers of the #4 Corvette Racing Corvette C7.R before the podium celebration.

We did it! Oliver Gavin, one of the drivers of the #4 Corvette Racing Corvette C7.R.