The 64th annual running of the 12 Hours of Sebring was held on Saturday March 19th at Sebring International Raceway.  Over the course of this classic endurance race we experienced sun, rain, light, and dark. We also witnessed how the overall winning team won there second consecutive race in the IMSA WeatherTech SportsCar Championship taking the so-called 36 Hours of Florida. This blog is about my experience at the “12 hours of Sebring” (actually about 15 hours) from the spectator side of the fence. First up is morning warm-up and the paddock. Hope you like the photos.

Got up at 5.00 am so had time to get ready, to prepare my camera since rain was forecast, and so had enough time to get to the track for a General Parking spot and to shoot the sunrise. Since it was going to be a wet day, wanted to travel light and only took essential gear. Mounted the ThinkTank Photo rain cover in the ready position on my 500mm lens, so it could be quickly used in the field. Made sure I had my 70-200mm lens rain cover, rain pant/jacket, and Mentos! Also put new memory cards and batteries in my cameras so wouldn’t have to change them in the field. Headed off for the hour drive to the track. On the way grabbed some take-out breakfast from a local fast-food outlet. Arrived at the track and parked in General Parking, then walked over the front-straight bridge (near the T17a end of the front straight) to the paddock area near the IMSA Technical Inspection tent. Thought this would be a good location to get shots of the cars coming down the paddock with the sunrise in the background. Got to this location around 7.15 am so had time to scout the area and set-up, since warm-up was scheduled for 8.00 am.

#81 DragonSpeed ORECA 05: Henrik Hedman, Nicolas Minassian, Nicolas Lapierre – As the morning progressed it looked like their was a “sunburst” over Serbing.

Turner Motorsport BMW M6 GT3 – Also tried developing some shots in black and white to emphasize the backlighting on the edges and front of the car. Here’s “eyes of the Bimmer”.

#4 Corvette Racing Corvette C7.R: Oliver Gavin, Marcel Fassler, Tommy Milner – Headed over to T17a for the warm-up session since it was close to the paddock and the morning sun would be lighting the drivers right side of the cars with some even warm light. 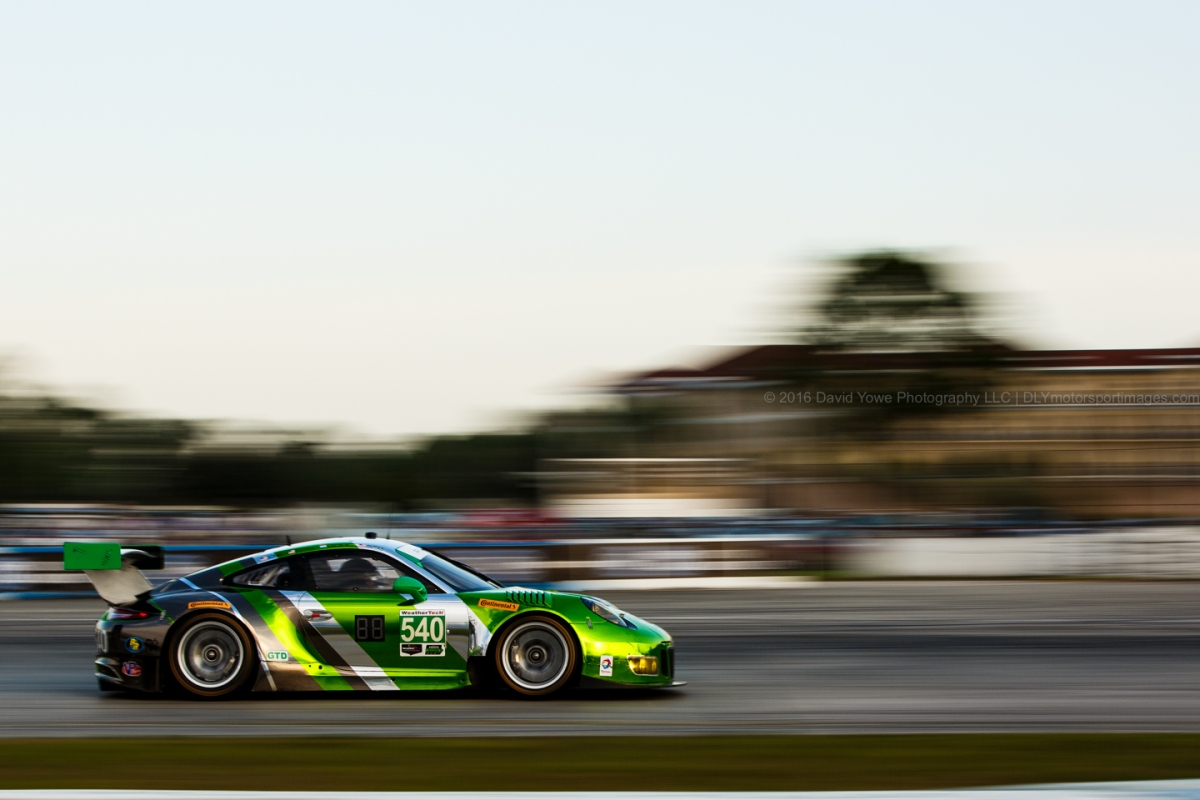 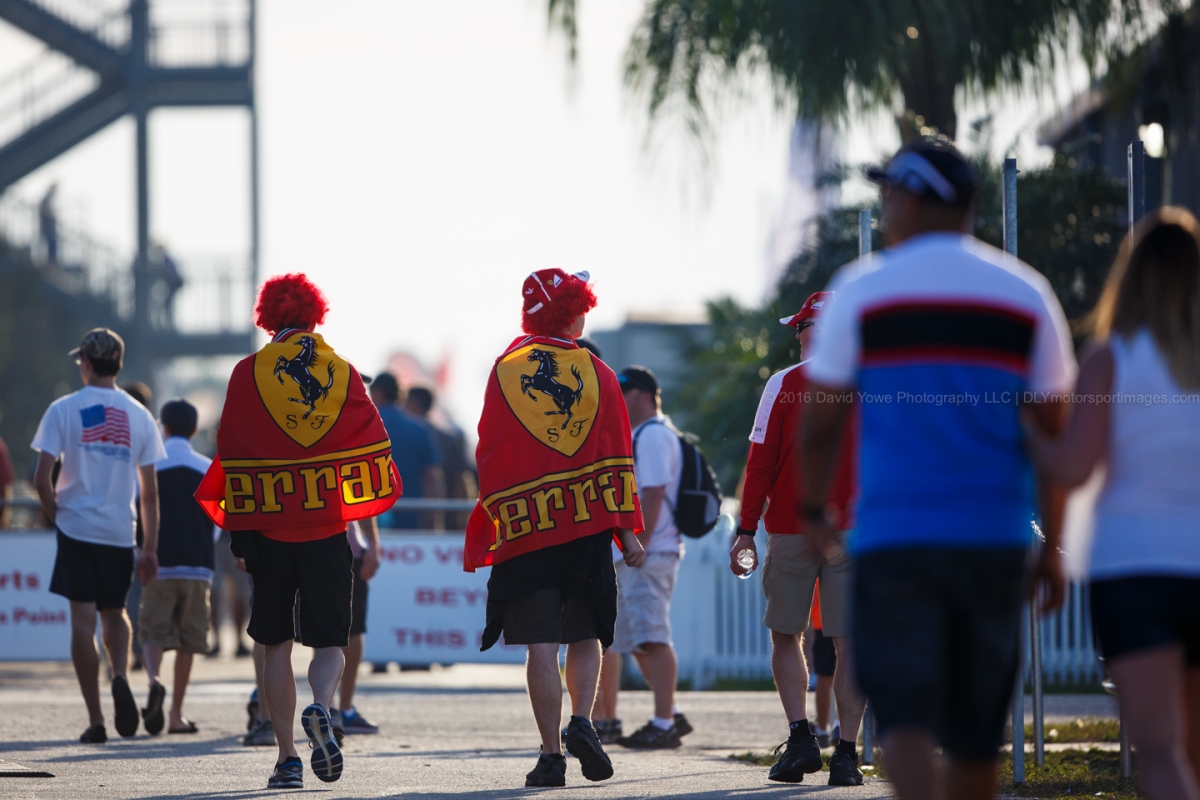 On my way back to the paddock saw some Ferrari fans.

Walked back over the front straight bridge, across the Party Zone, then over the Sebring bridge. Stopped for a moment and looked at the how the warm morning light made the yellow paint on the Château Élan Hotel glow. Was thinking, with the blue skies it was hard to imagine it would rain today. Guess I was wishful thinking? 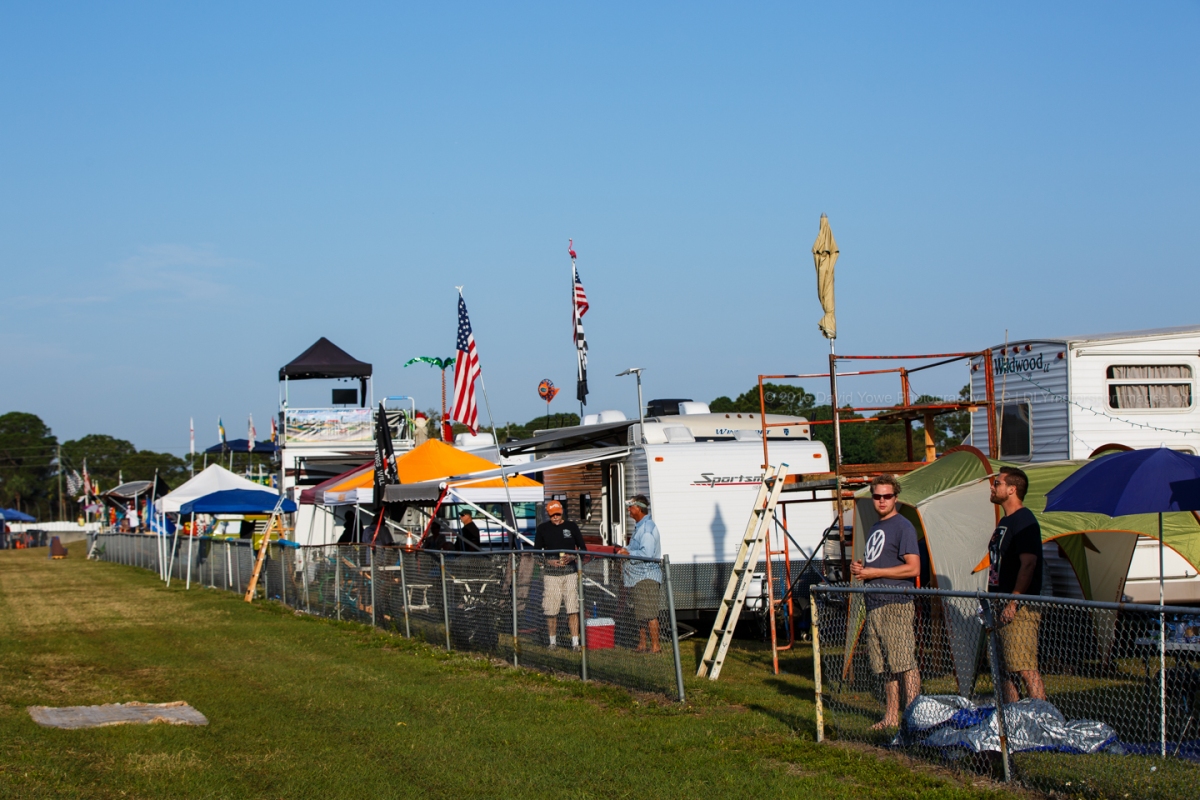 Its great how fans at Sebring set-up their campsites, ranging from tents, to caravans, to RVs; as well as some very elaborate set-ups which include stands to enable the fans to have elevated views of the race track.

Kept walking through the campsite area to Turn 9 where I was going to meet some friends for the start of the race. 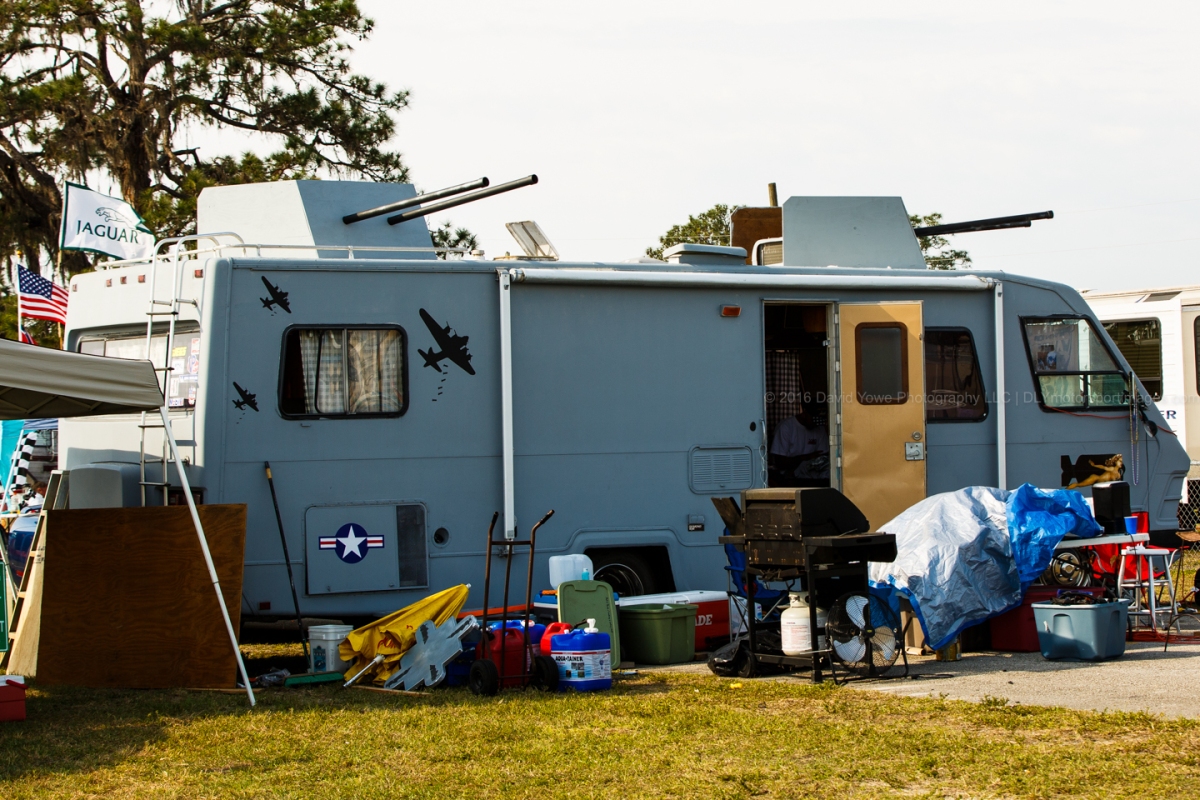 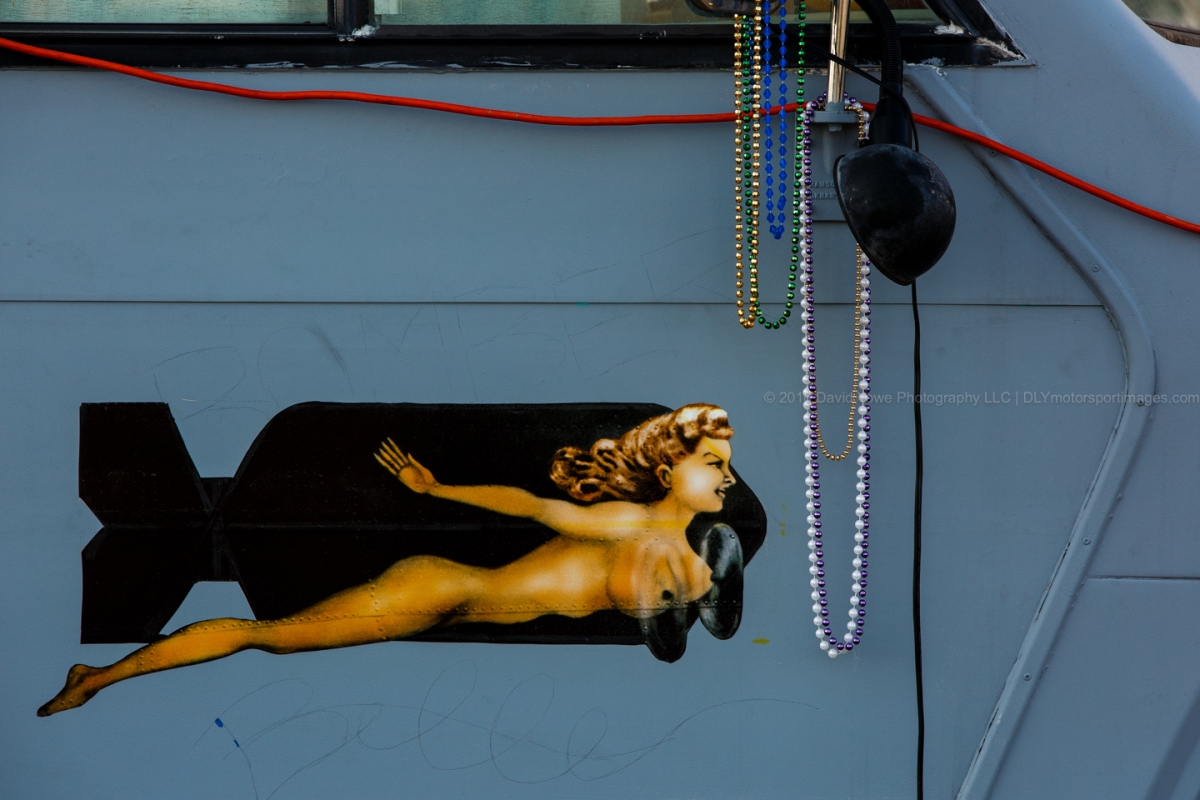 Had a little bit of time to wait until the race started, so checked out some of the fan campsites. “Bomber Belle” was one of my favorites, with the B17 and air force insignia livery and the turrets on top of the RV. Really cool.

Some campsites had a bar and grille. 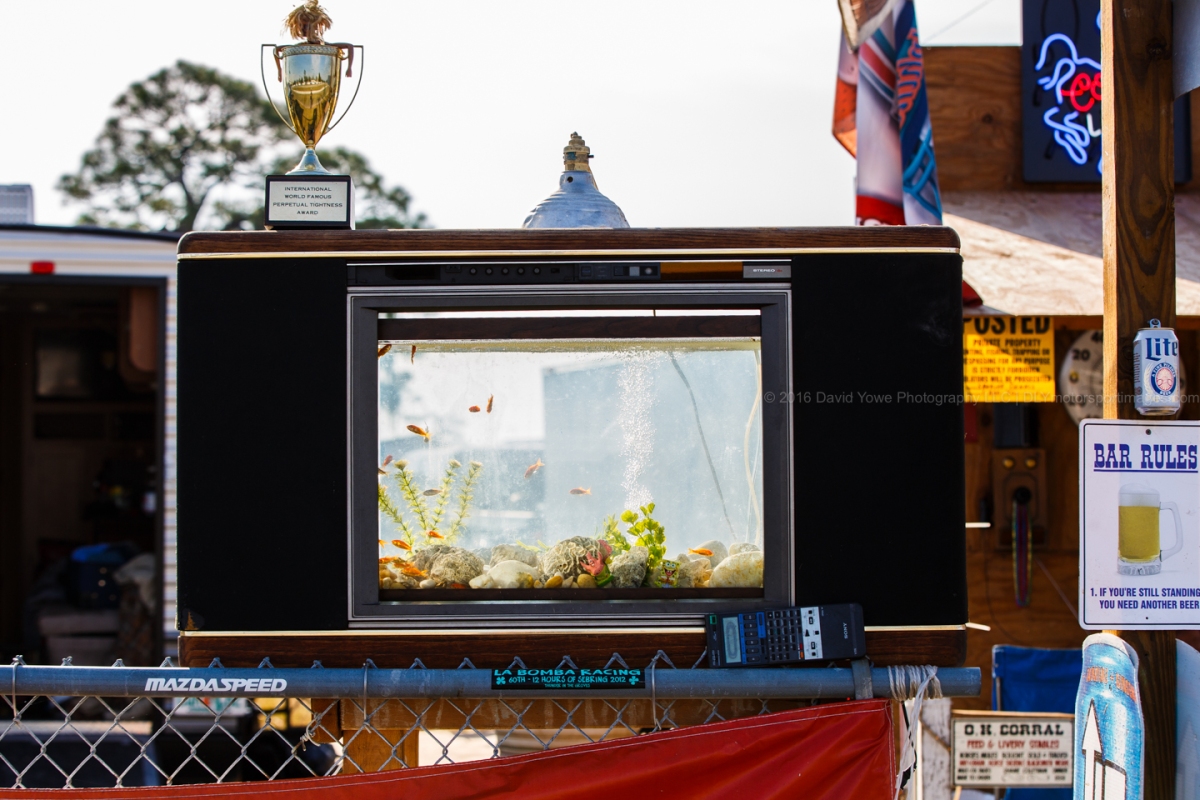 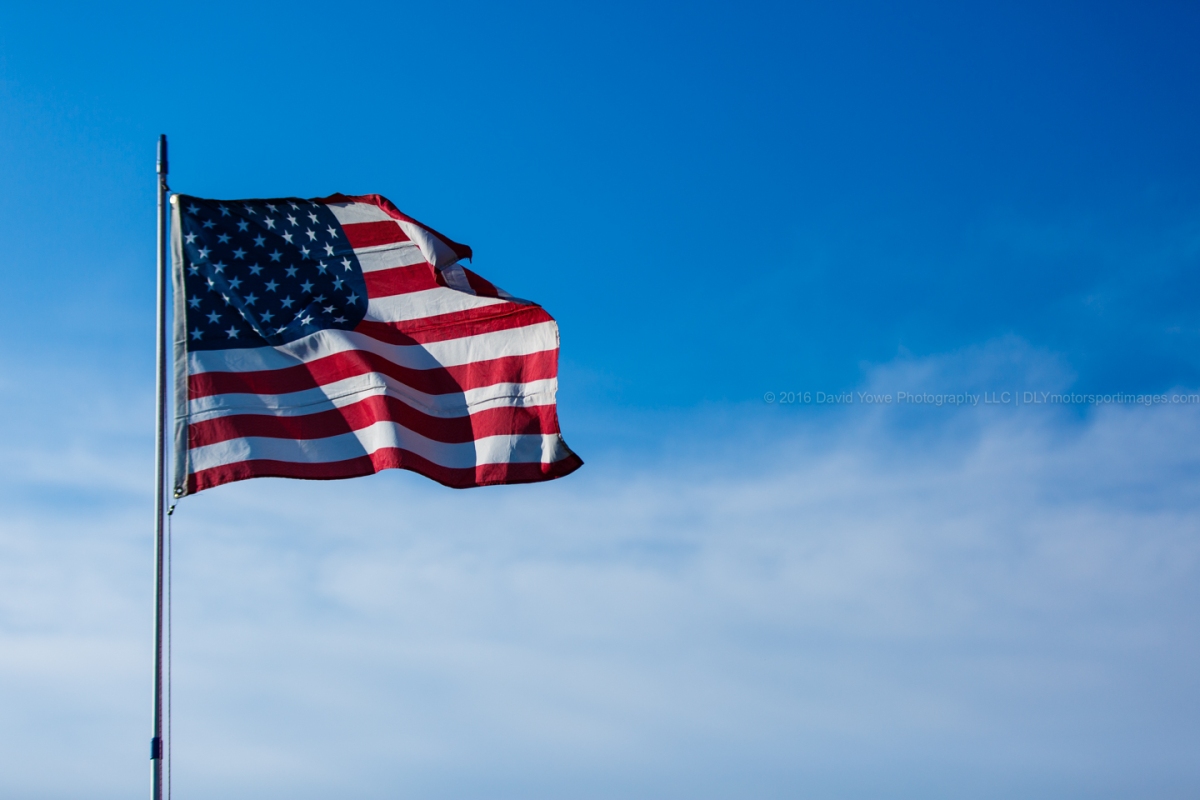 Dodge City the Home of the Stumble Inn was one of the most elaborate campsites with a bar, fish tank in a TV, cows, and even chickens.

A Lear jet overhead to remind us that Sebring International Raceway is near an airport.