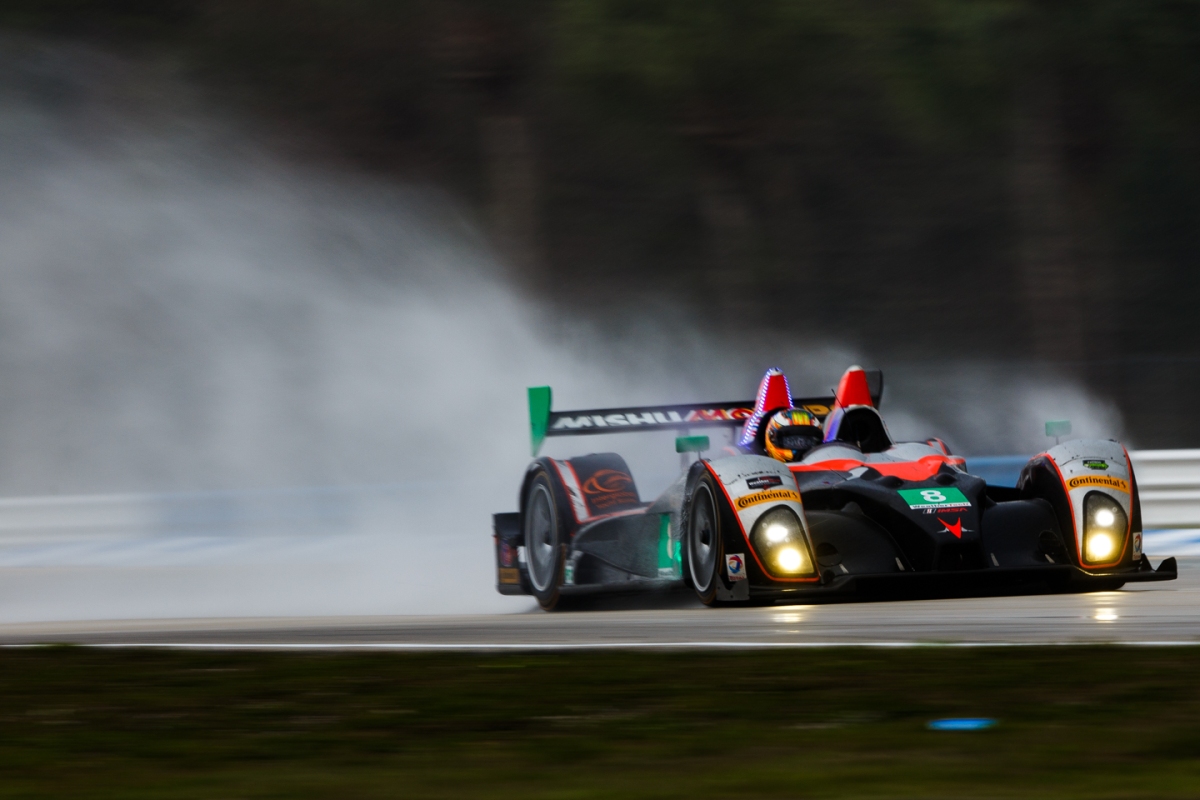 The 12 Hours of Sebring started under overcast skies on Saturday March 19th at Sebring International Raceway.  Over the course of this endurance race we experienced sun, rain, light, and dark.  This blog is about my experience covering the race from the spectator side of the fence. Hope you like the photos.

#2 Tequila Patrón ESM Ligier JS P2: Scott Sharp, Johannes van Overbeek, Ed Brown, Luis Felipe Derani – Covered the 10.40 am race start at T9 so could get long shots of the cars in a line as they sped along this straight. 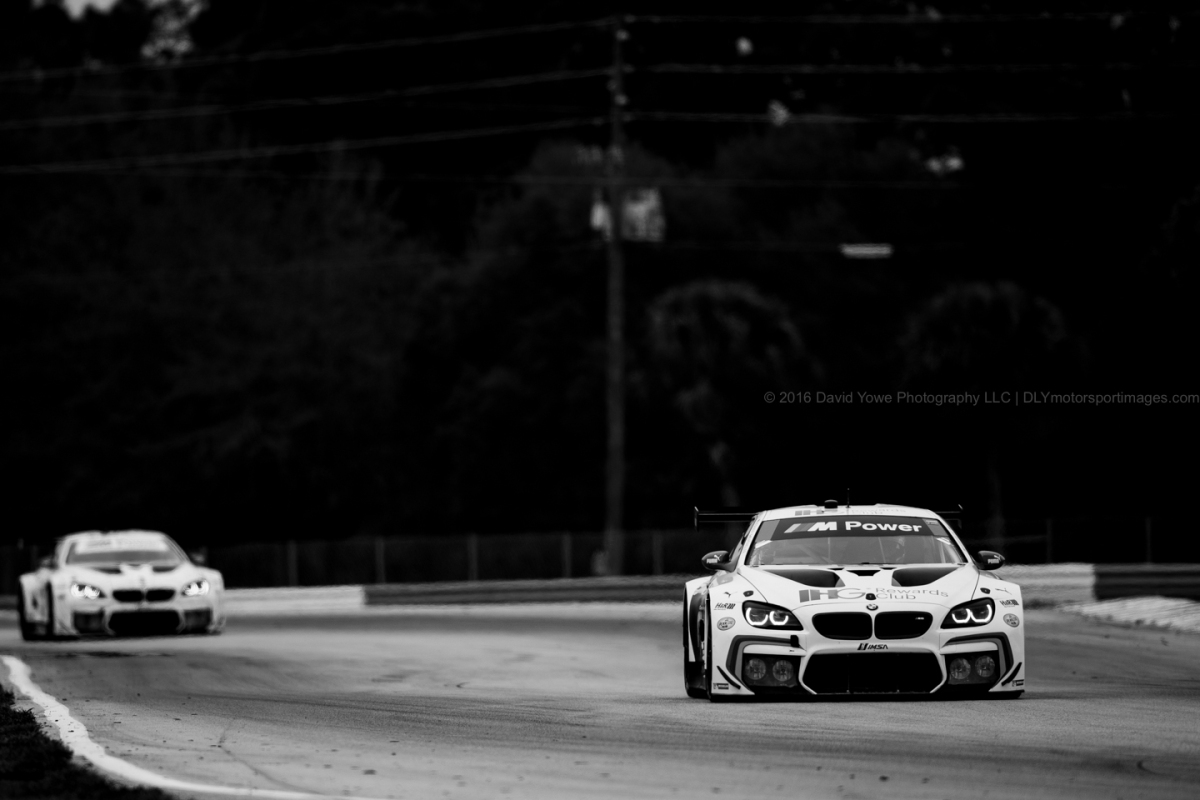 #25 BMW Team RLL BMW M6 GTLM: Bill Auberlen, Bruno Spengler, Dirk Werner – To the right of T9 their is an opportunity to get panning shots of the cars with the blue tires in the foreground and blue and white crash barrier in the background. 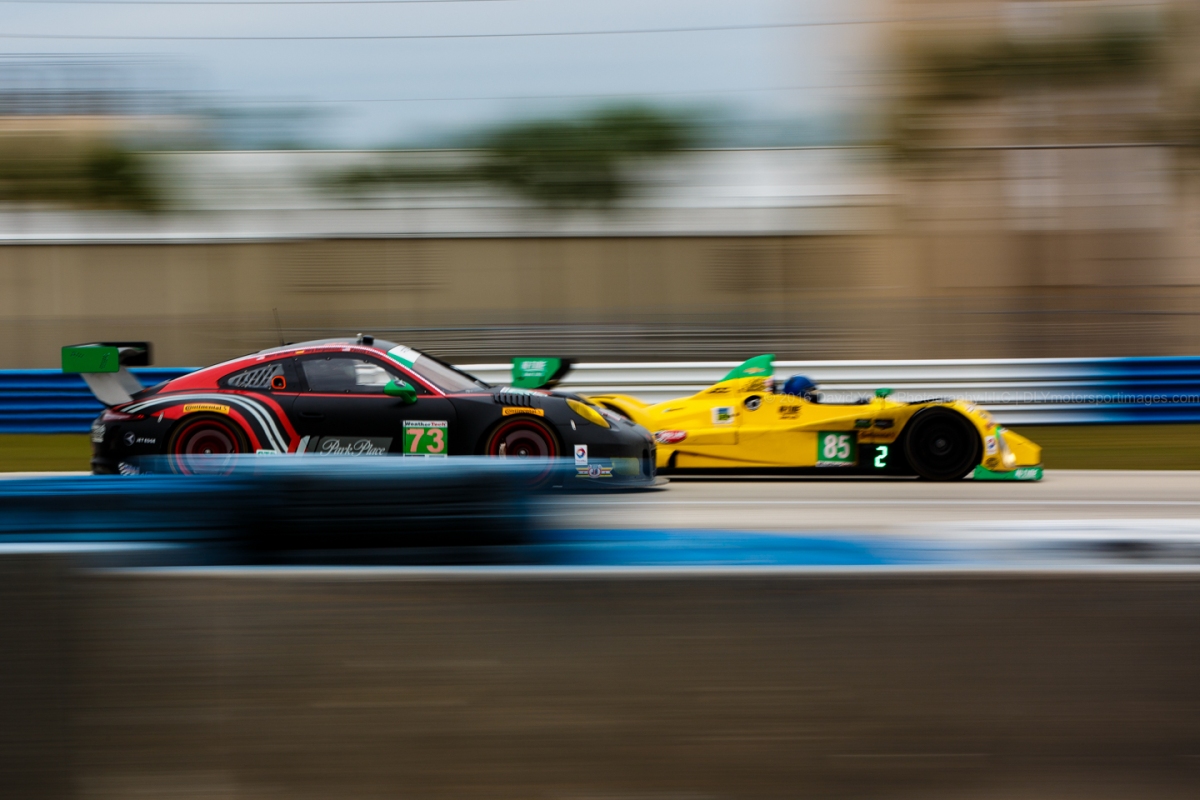 #67 Ford Chip Ganassi Racing Ford GT: Ryan Briscoe, Scott Dixon, Richard Westbrook – Really liked how the red, white, and blue livery of the Ford GT was complemented by the white and blue of the tires and guard railing.

#5 Action Express Racing Corvette DP: João Barbosa, Filipe Albuquerque, Christian Fittipaldi, Scott Pruett – Light rain started to fall around 12.00 noon, with the rain intensifying about an hour later. This resulted in the leading cars having a relatively clear view, but the trailing cars had poor visibility due to the “rooster tail” of water coming from the car in front of them. Was amazing how close the cars raced, despite the poor weather conditions. 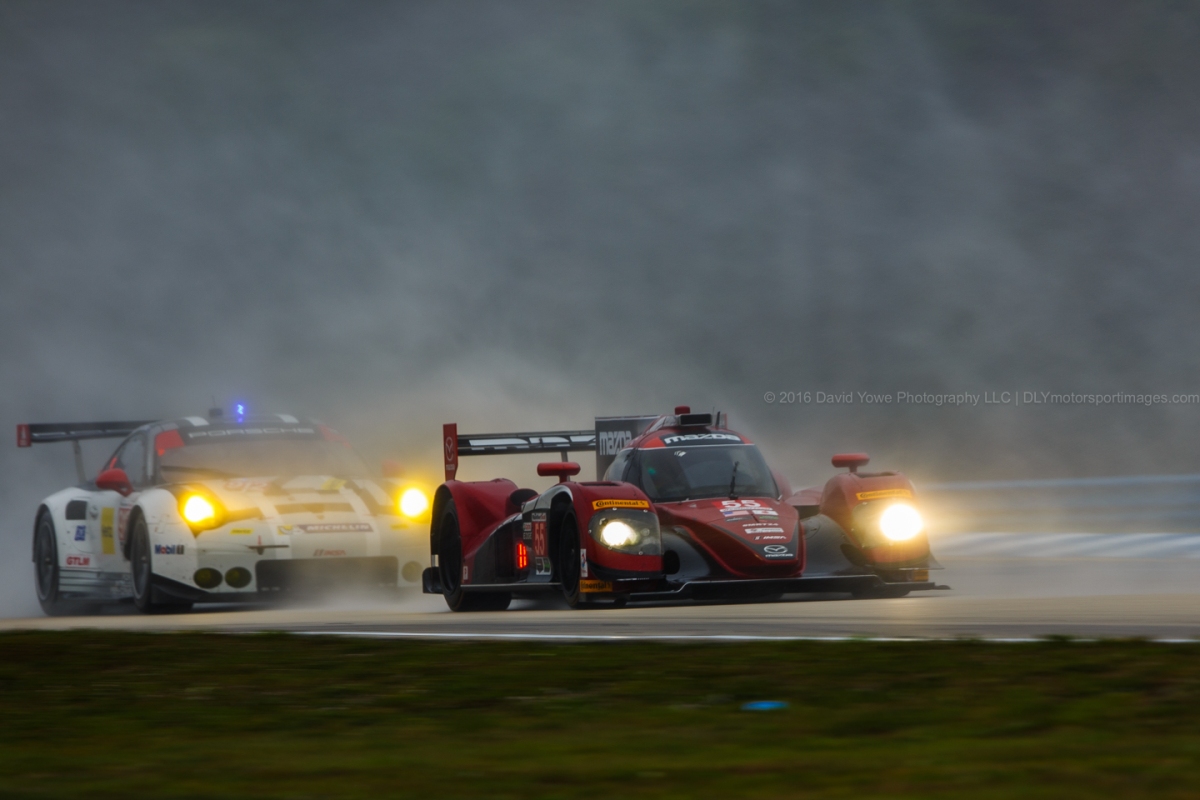 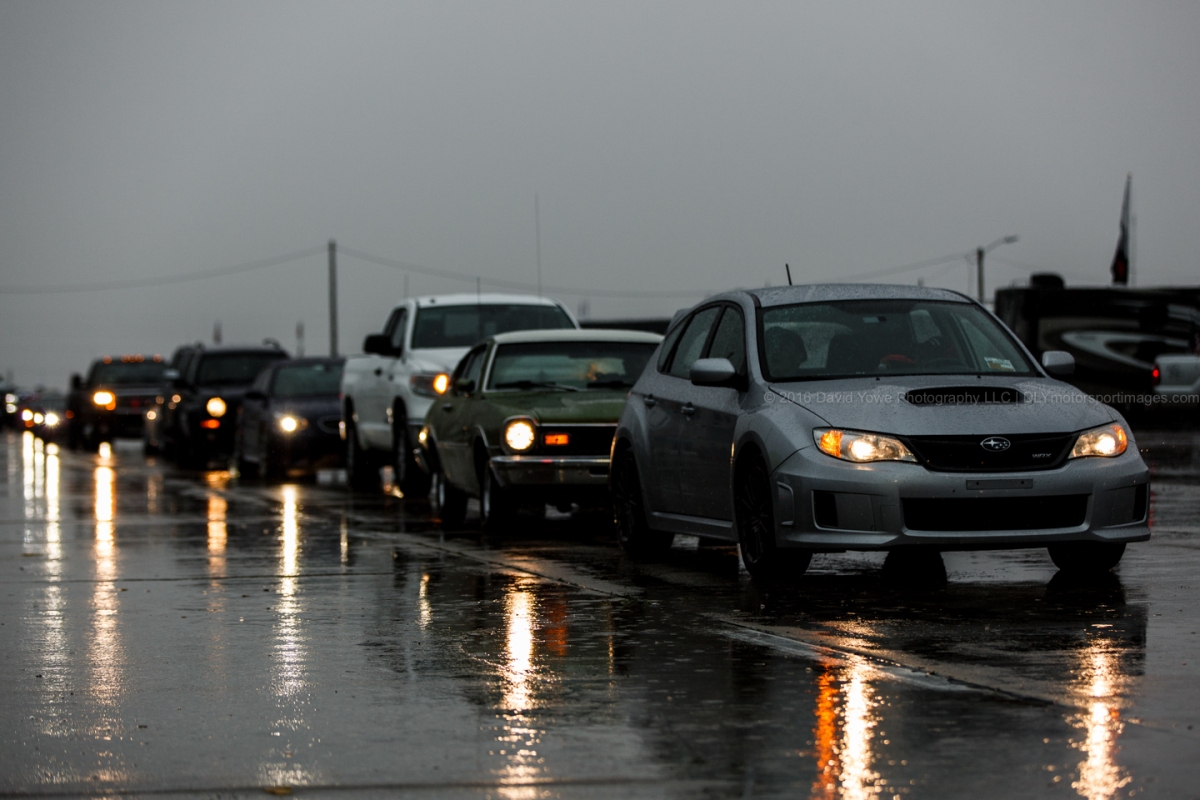 Around 1.30 pm the race was red flagged due to lightning, so headed over to the paddock for shelter and food. During this period the rain came down very heavy, but despite the inclimate weather, the fans kept up their spirits. 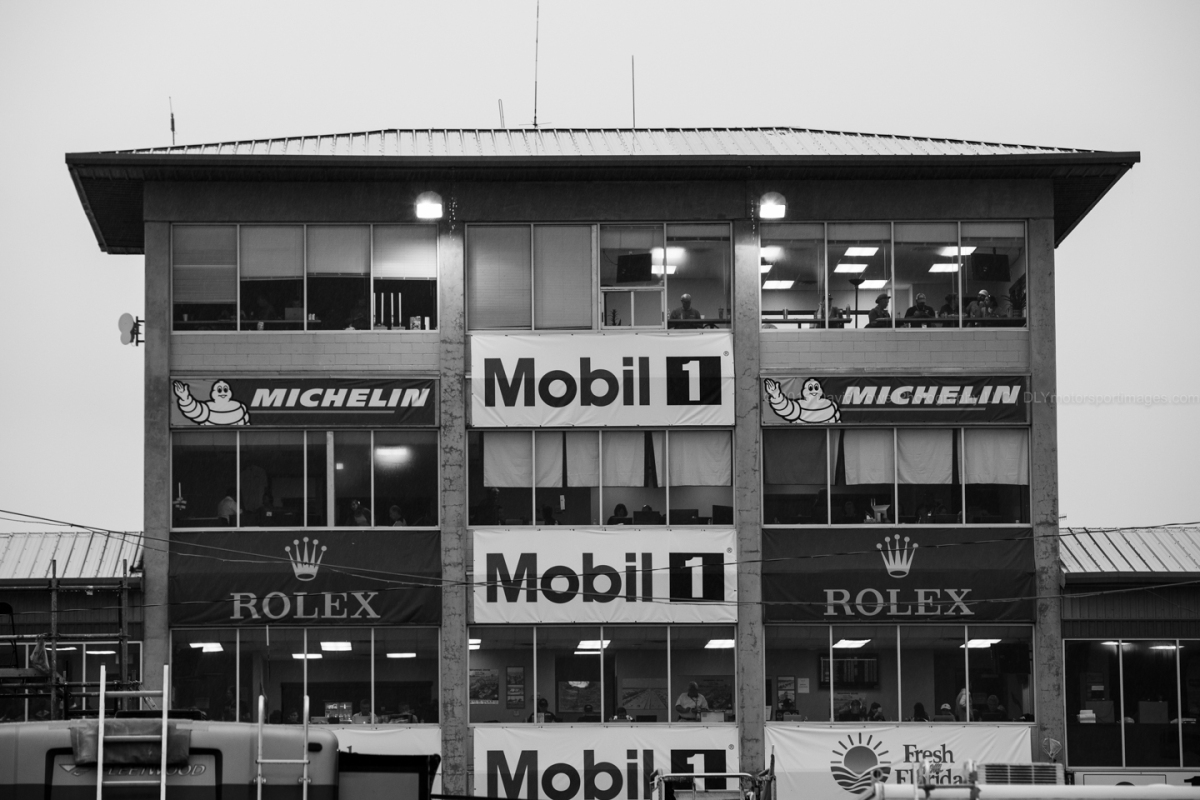 The rain and dark skies continued while I was having lunch. 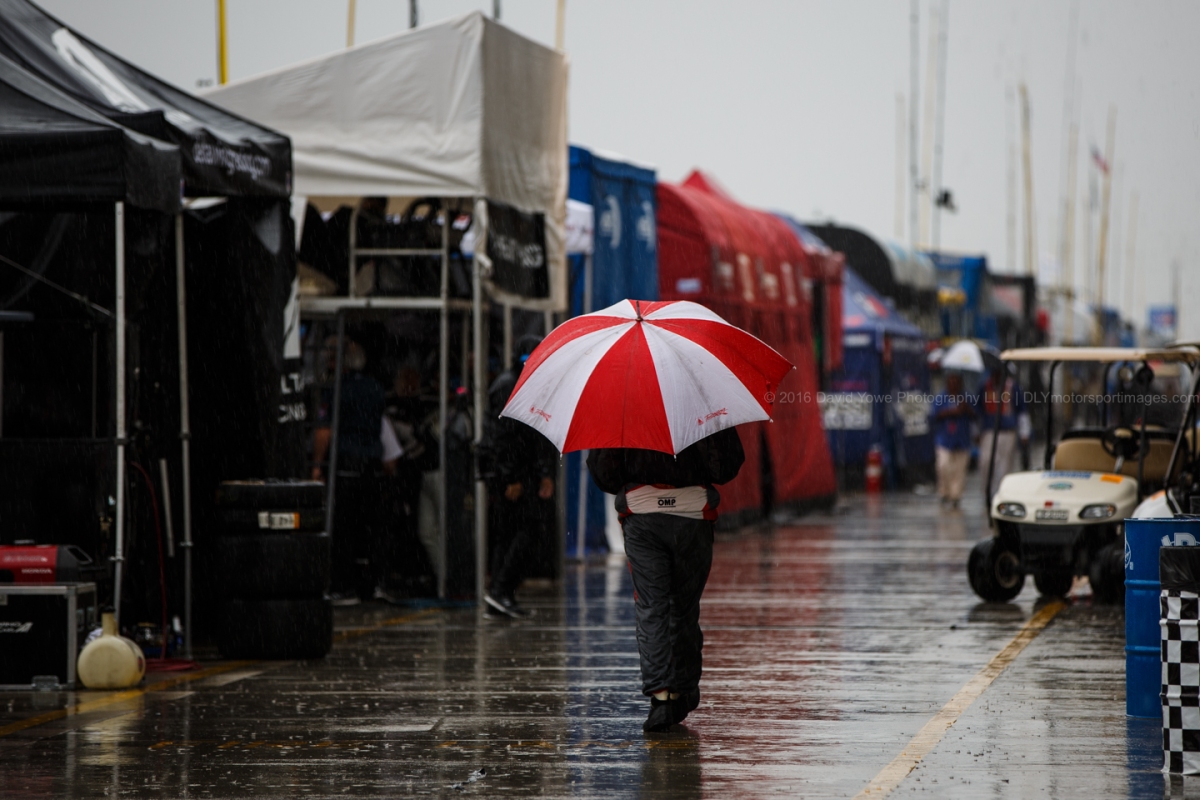 After lunch headed over to the team paddock area to see what was going on.

Also visited the Hall of Fame Gallery of Legends and saw some classic Porsche’s and Corvette’s. Really cool looking cars. 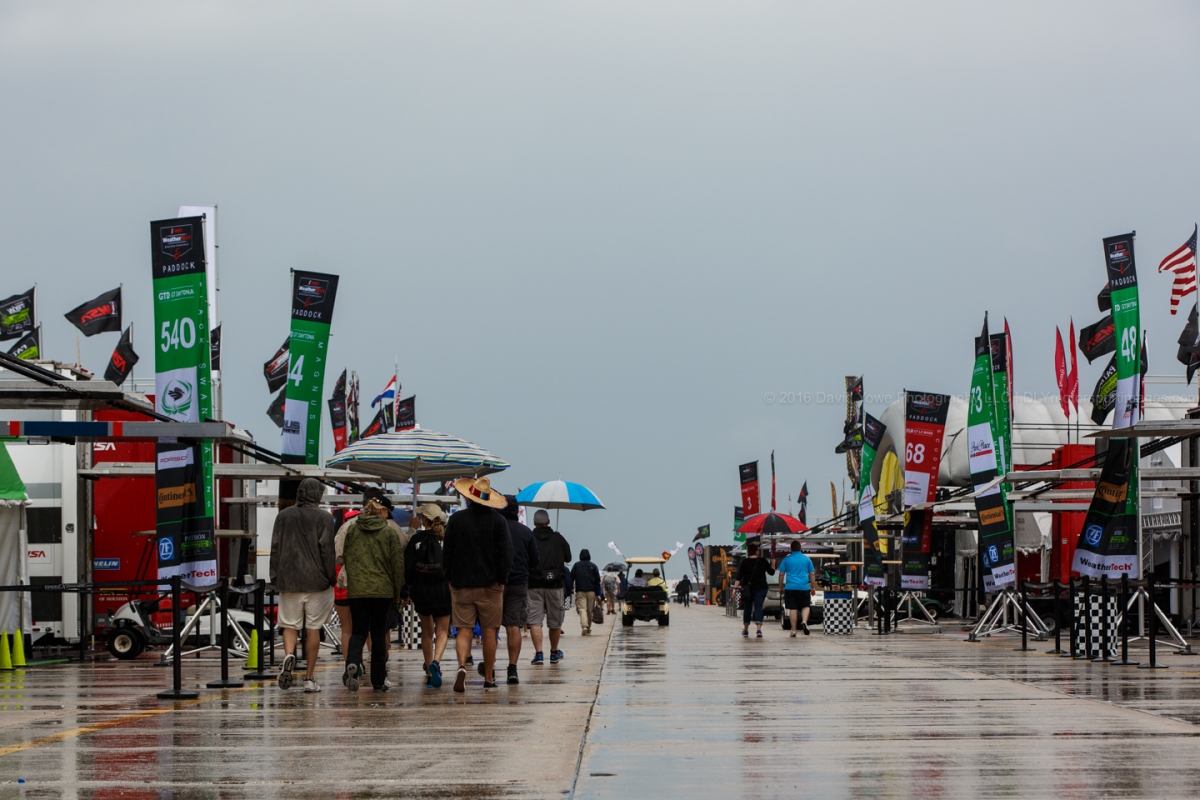 By the time I reached the team paddock area the rain had stopped, but the sky was still very overcast.

During the early part of the race the #11 Change Racing Lamborghini Huracán GT3 hit the barriers, which resulted in alot of front end damage.

The #66 Ford Chip Ganassi Racing Ford GT (Joey Hand, Sébastien Bourdais, Dirk Müller) was being worked on by the team to fix the damage done when it hit the tire barriers at Turn 1 when the rain fell during the race.

Jörg Bergmeister one of the drivers of the #73 Park Place Motorsports Porsche 911 GT3 R. 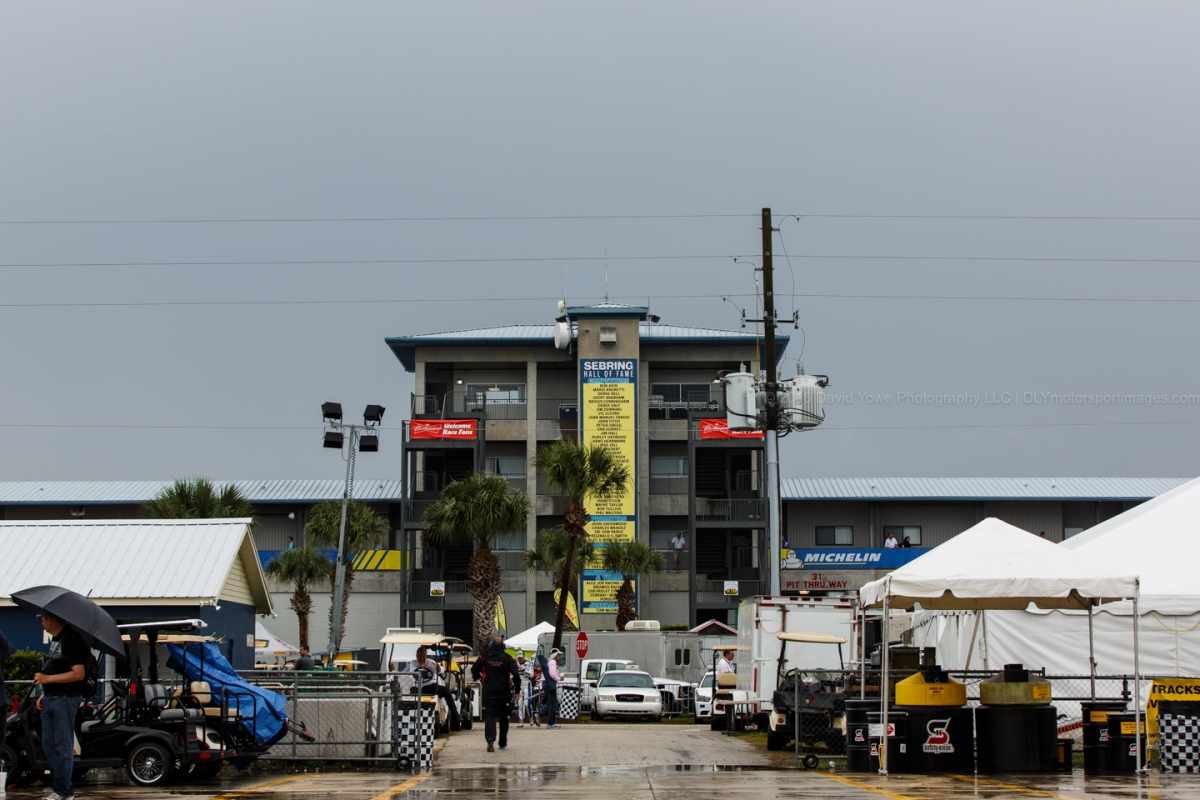 Around 4 pm the race re-started under overcast, but clearing skies. 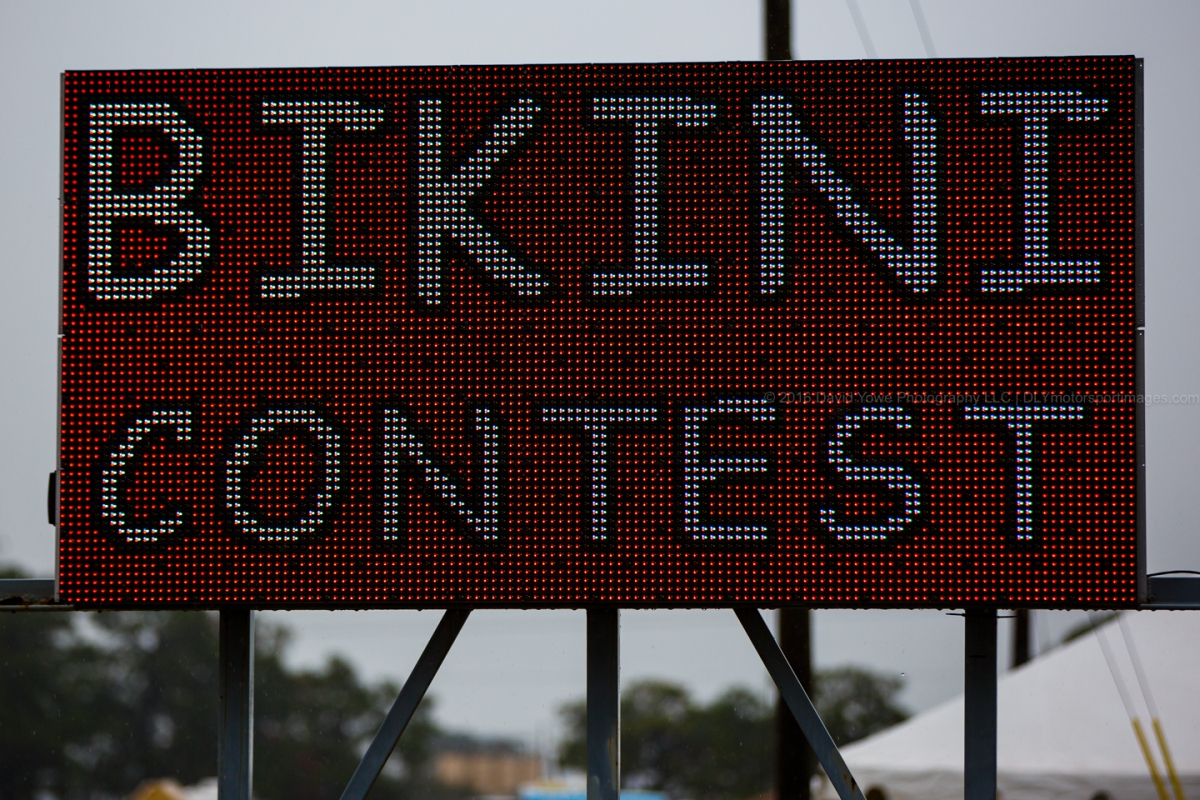 Before getting back to the track, stopped by the Bikini Contest.

#70 Mazda Motorsports Mazda: Tom Long, Ben Devlin, Joel Miller, Keiko Ihara – Due to the overcast skies the iconic sunset shot on the front straight wouldn’t be possible, so went over to Turn 16 for so twilight shots of the cars speeding across a barren background.

#25 BMW Team RLL BMW M6 GTLM: Bill Auberlen, Bruno Spengler, Dirk Werner – The dirt and grim collected on the cars during a race was evident on the white Bimmer. 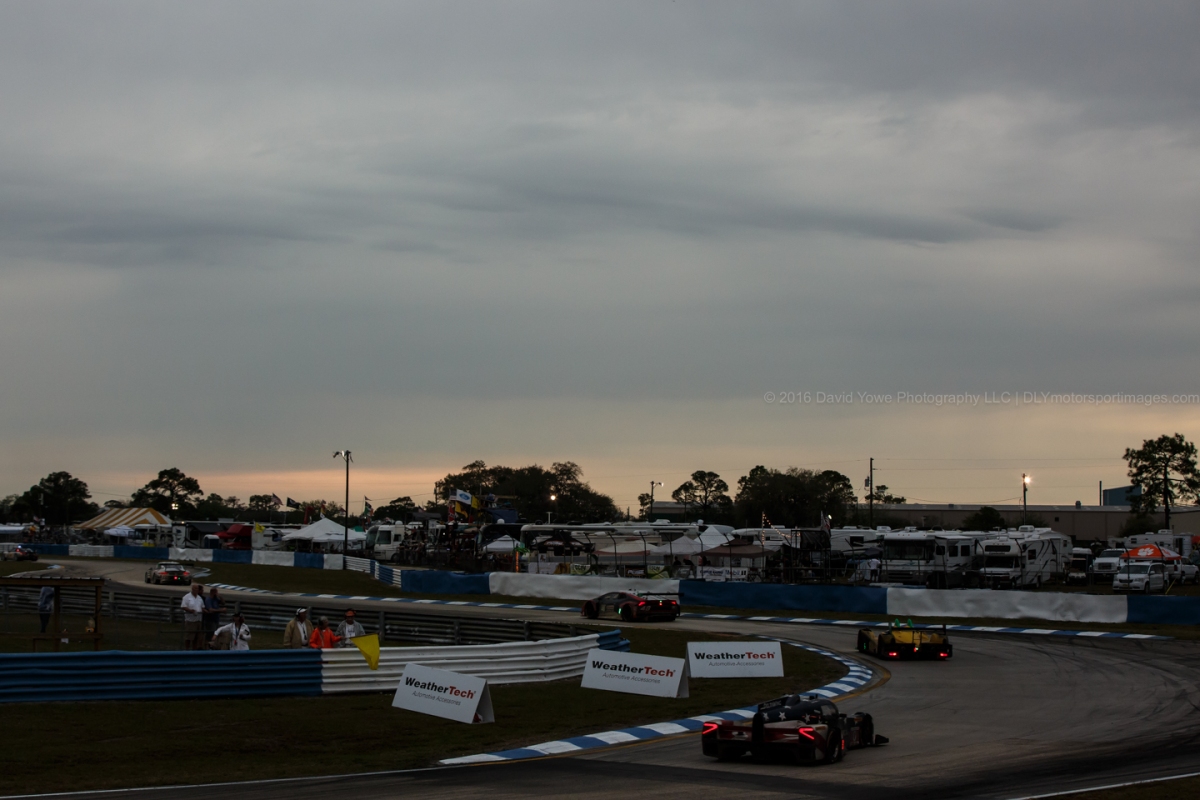 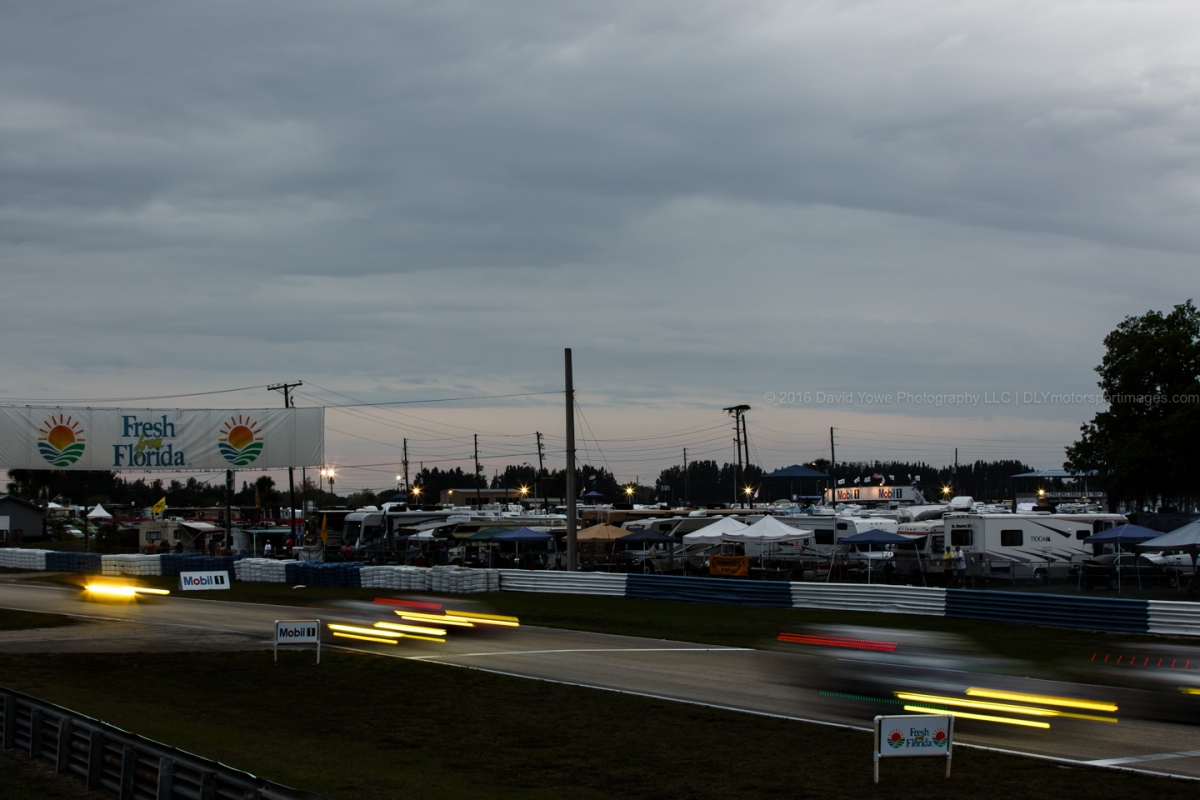 With the fading light, headed over to the outside of T3. These shots were taken from the top of a fan erected scaffold-stand. Many thanks to the fans for letting me use the stand. 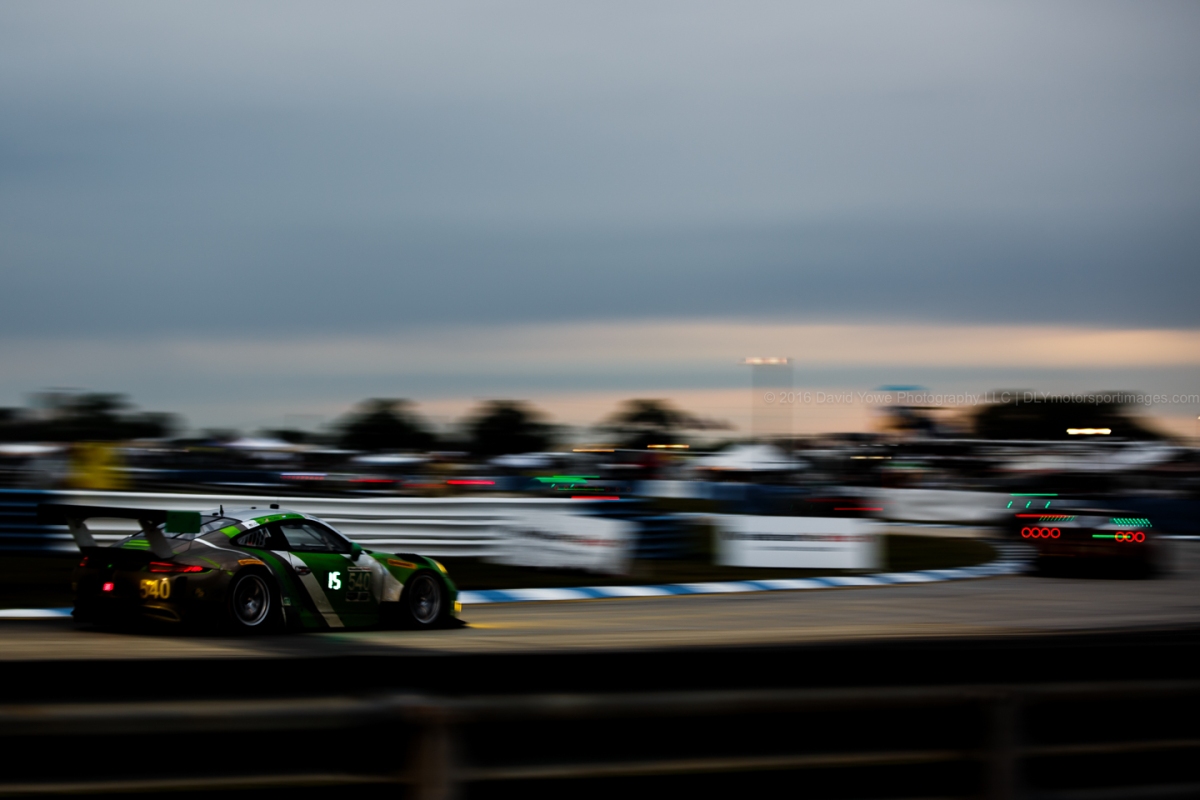 #540 Black Swan Racing Porsche 911 GT3 R: Timothy Pappas, Patrick Long, Nicky Catsburg, Andy Pilgrim – This shot may not be the sharpest, but I like the pastel of colors from the setting sun and the lights from the cars.

#54 CORE Autosport ORECA FLM09: Jonathan Bennett, Mark Wilkins, Colin Braun – The reason I came to the outside of Turn 3 was to get shots of the cars with their glowing disc brakes as they decelerated into this corner. It also helps that the outside of Turn 3 is illuminated by floodlights. The glowing disc brakes were most evident on the PC class cars.

On my way back to the car, grabbed a shot of the iconic Mobil Bridge over the Turn 6 to 7 straight. Really had a great time catching up with friends and getting back to motorsport photography. Sebring is one of my favorite events to attend for both its on and off track action. I’ve forgotten how much I like to shoot endurance races. Thanks again to all those who helped me and hope to be back next year.

BTW, after 238 laps the race winners were,