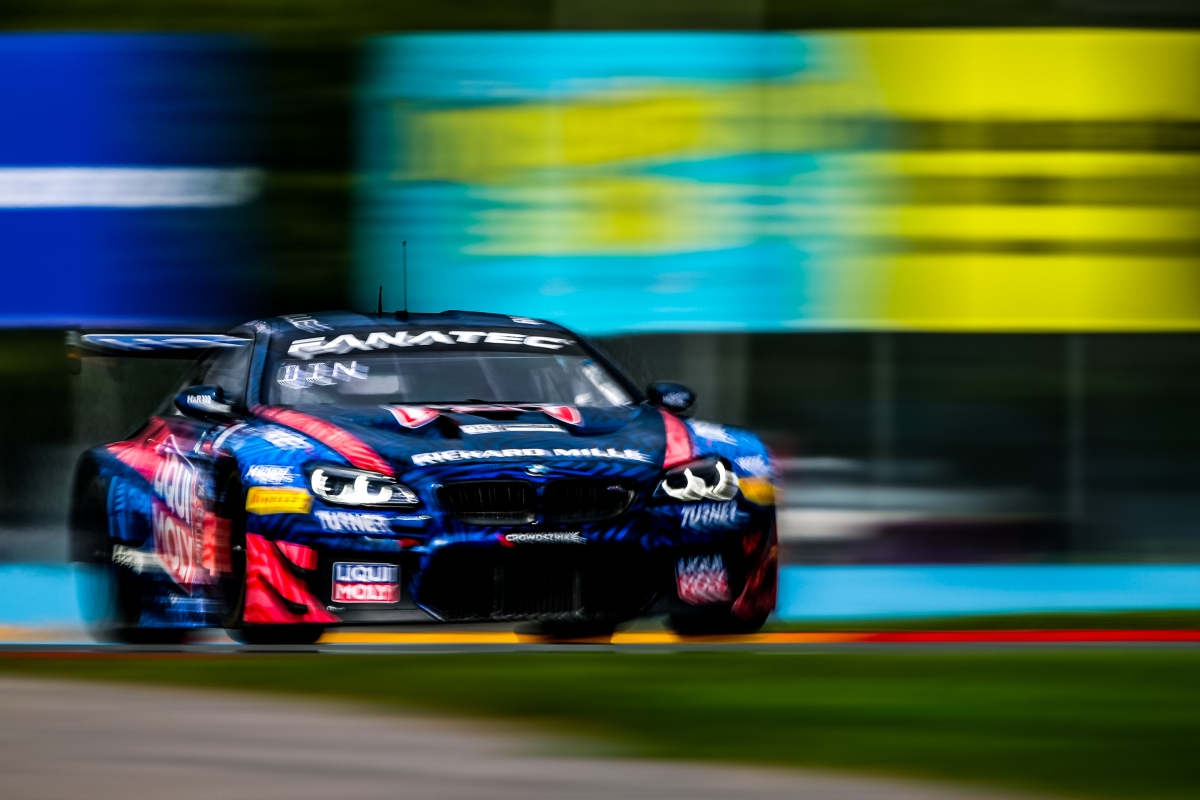 This blog is be about the Saturday qualifying and race sessions for the SRO Motorsports America series at Watkins Glen International. Hope you like the photos.

Got up around 6.00 am and left the hotel at 6.45 am, and stopped by a fast food place to pick-up some breakfast and coffee to eat on the way to the track. Parked the car and went to the media center, where I got my camera gear together for the days shoot. This would be another busy day, with several qualifying sessions and five races, but was looking forward to it. 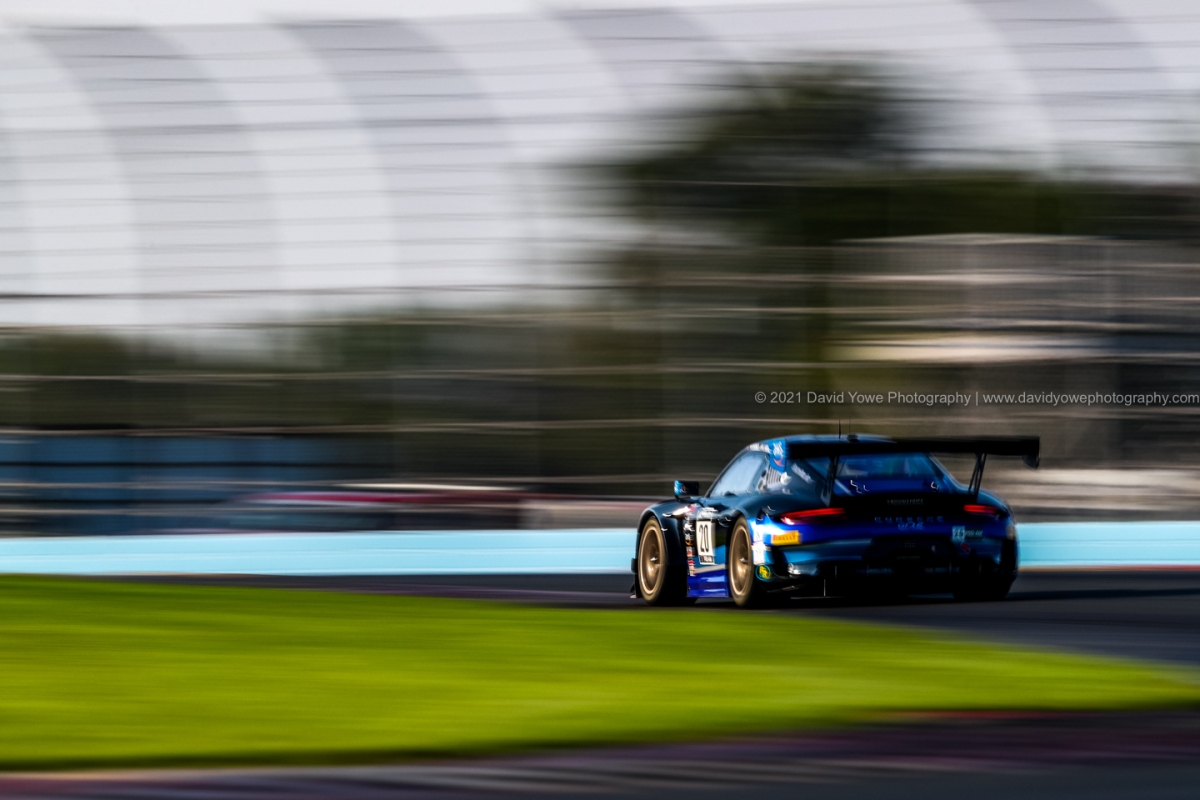 For the morning qualifying sessions went to the inside of Turn 5, where the cars exit the back straight and enter the Inner Loop. In the morning this is a good location to shoot at, since drivers left of the cars are illuminated by the morning sunlight. Photographed from the spectators side of the fence, since the gate to the other side of the fence was locked, but that was okay, since the spectator fencing is about chest height and is easy to shoot over. At 8.00 am the GT4 America SprintX qualifying started, followed by the GT World Challenge cars at 8.50 am. Mainly focused on panning shots of the cars as they navigated through Turns 5, 6 and 7 up and out of the Inner Loop using the 500mm lens. Really like this part of the track, since there is the opportunity to capture the cars at speed, especially during qualifying when they are trying to go at their fastest. Flying into Turn 6 with the #33 Winward Racing Mercedes-AMG GT3 (top) and #20 Wright Motorsports Porsche 911 GT3-R 991.2 (bottom).

The #6 KPAX Racing Lamborghini Huracan GT3 looked like a rocket-ship as it entered Turn 7. 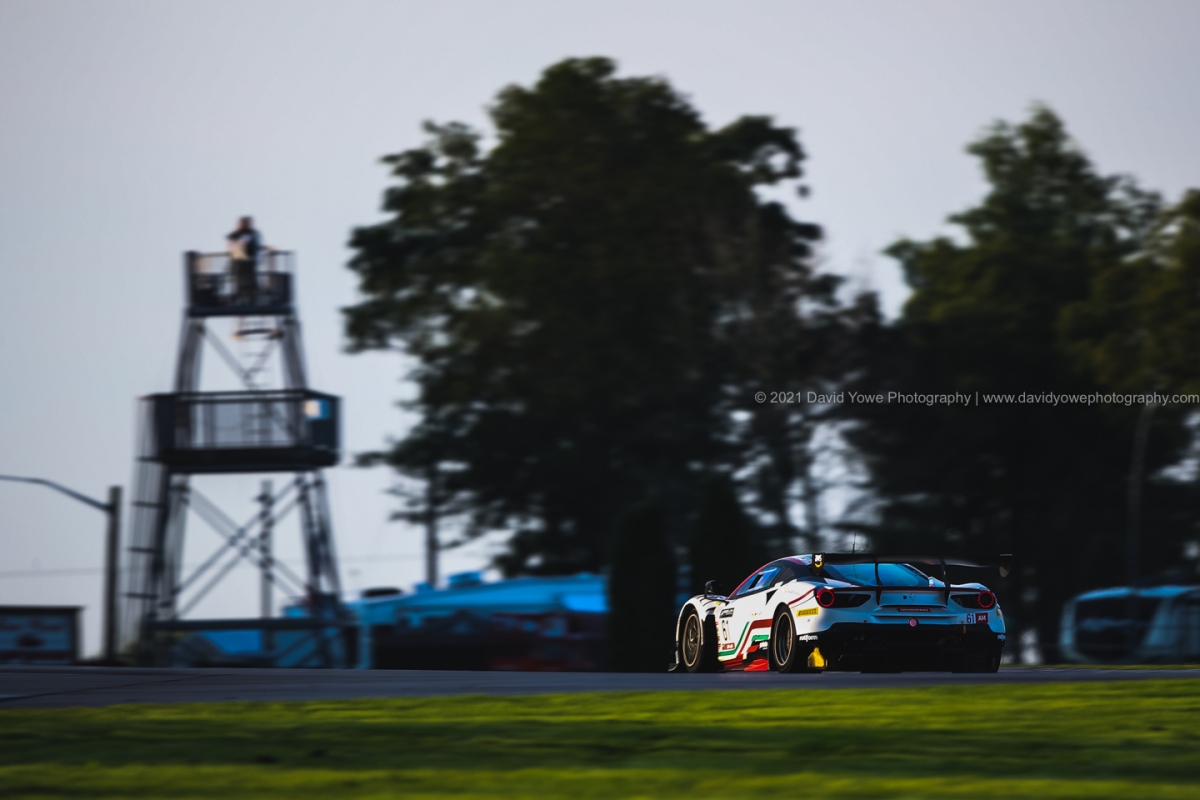 Watching the cars fly through this part of the track is always good to see. The #120 Premier Racing Porsche 718 Cayman GT4 CS MR. After the USAC Porsche Sprint qualifying finished at 11.15 am, headed back to the car so I could get into position for the first race of the day.

For the Pirelli GT4 America SprintX race which started at 11.30 am, went to the top of the Boot on drivers right at Turn 9, for shots of the cars coming up the hill, around, then away from this turn. Captured the field of cars lined up behind the safety car during the lap before the start of the race. 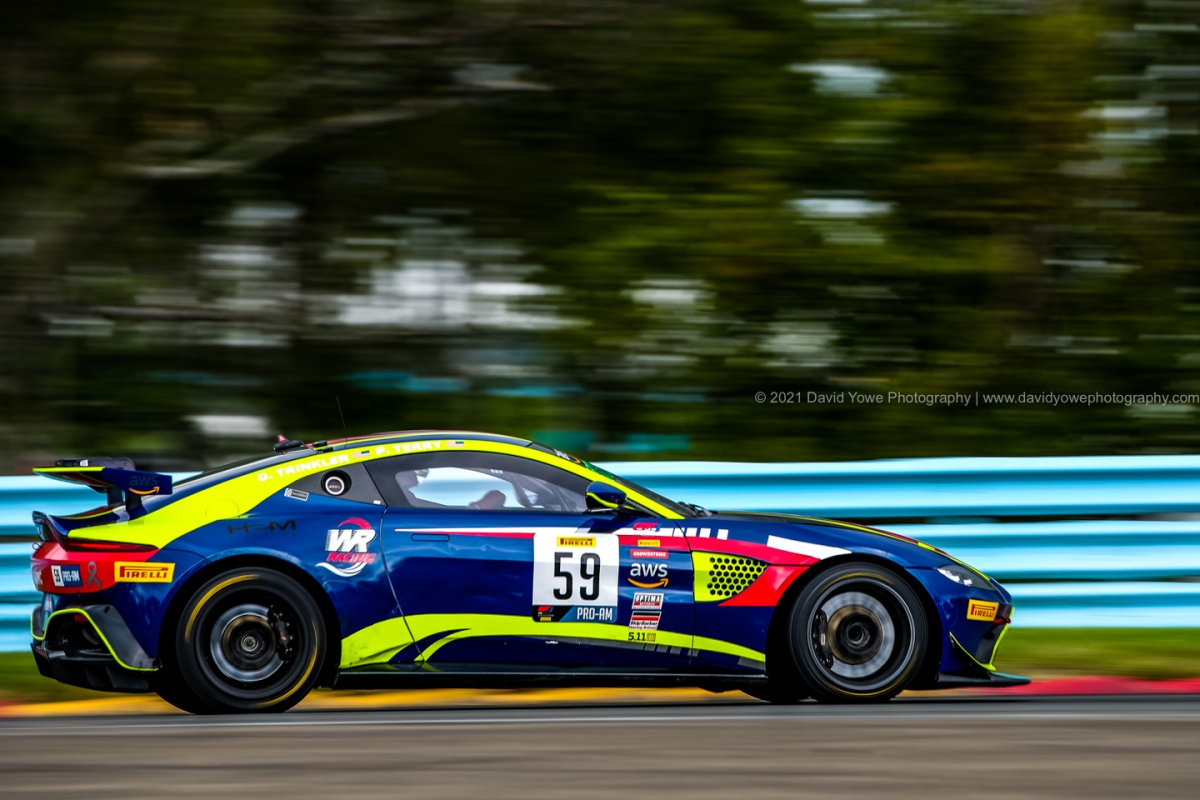 Walked down the hill so I could get shots of the cars going around Turn 9. The #5 Motorsport USA McLaren 570S GT4. 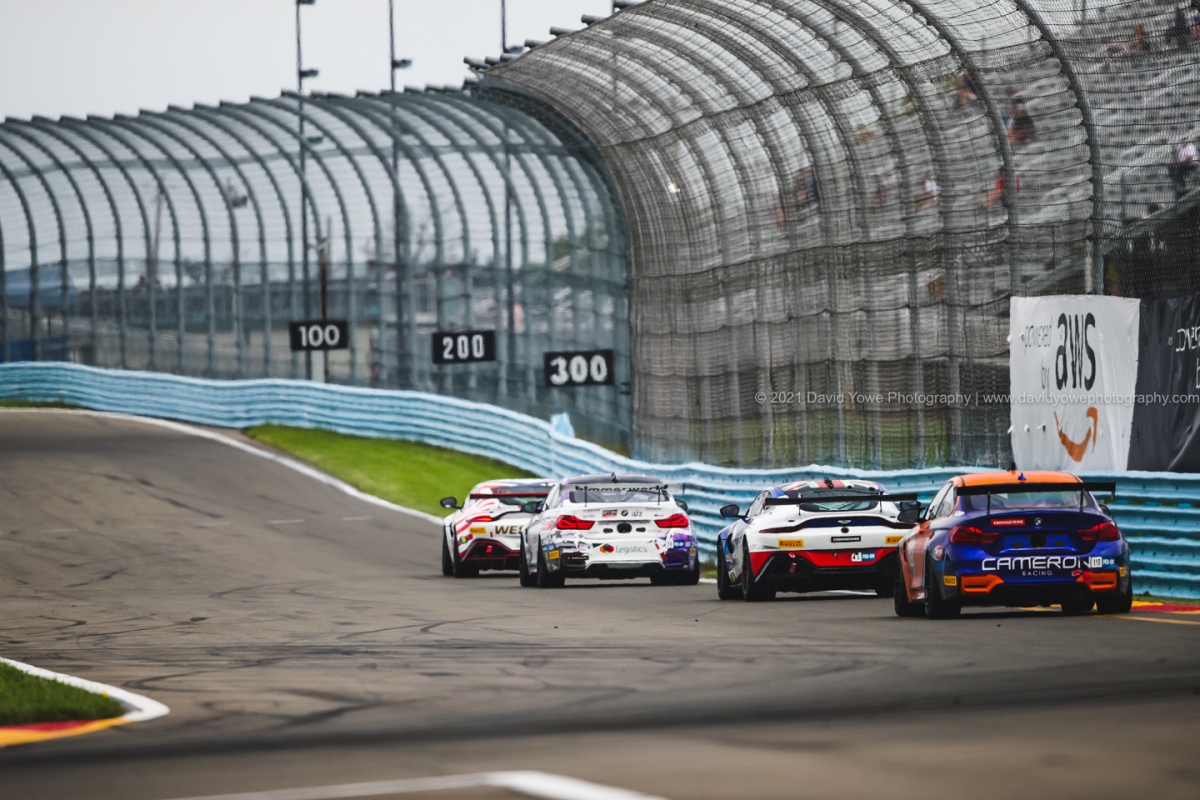 Then went back up the hill for some rear shots of the cars as they went down the straight into Turn 10. With the GT4 race finishing at 12.30 pm, grabbed some lunch and went to the Media Center to upload the photos from the morning sessions.

Is wasn’t long until I had to leave for the 1.45 pm GT World Challenge America race. Since this race lasted for 1.5 hours had enough time to drive to different parts of the track. For the start of the race went to the outside of Turn 4 for shots of the cars as they entered the Esses.

After a few laps, went back to the car and drove to the inside of the Inner Loop for shots of the cars going through this part of the track. Was great to see spectators at the race, and these race fans had a great vantage point from the top there RV. 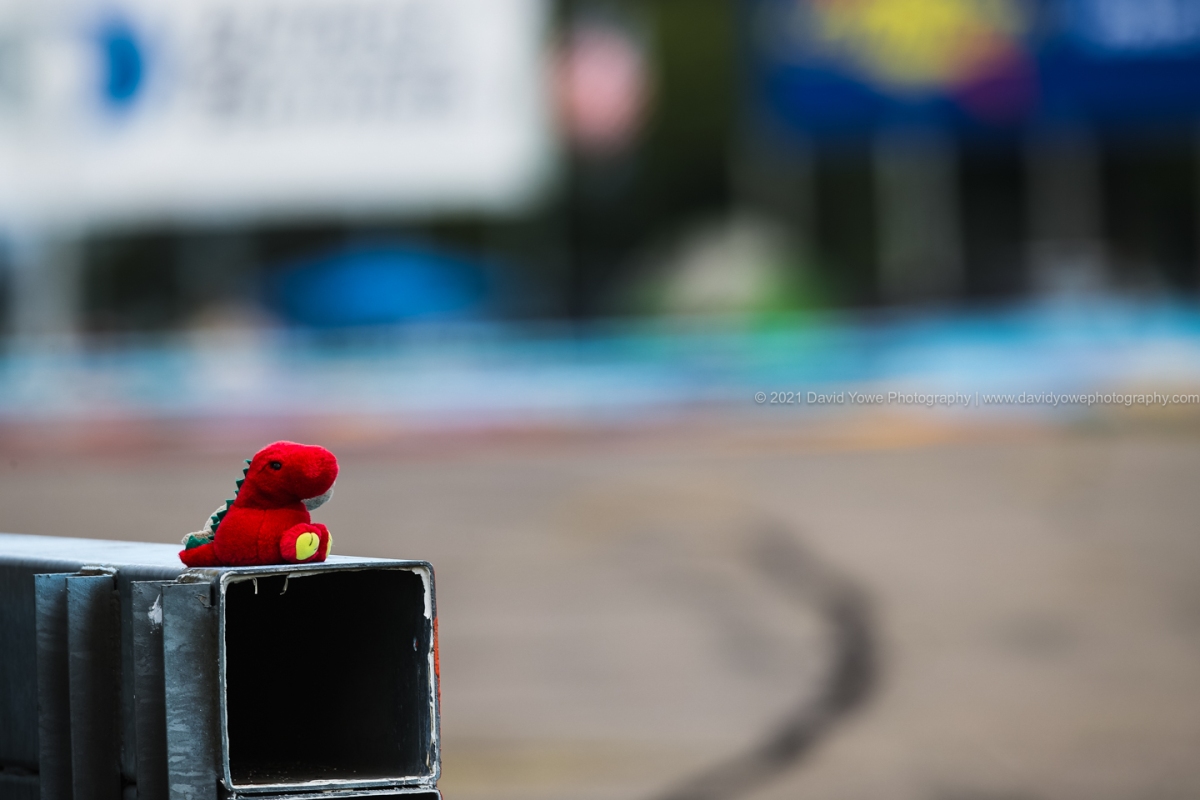 While I was getting set-up, noticed a “dinosaur” at the side of the track, who had a great view of the race action. The #33 Winward Racing Mercedes-AMG GT3 leading the #63 DXDT Racing through the Inner Loop. 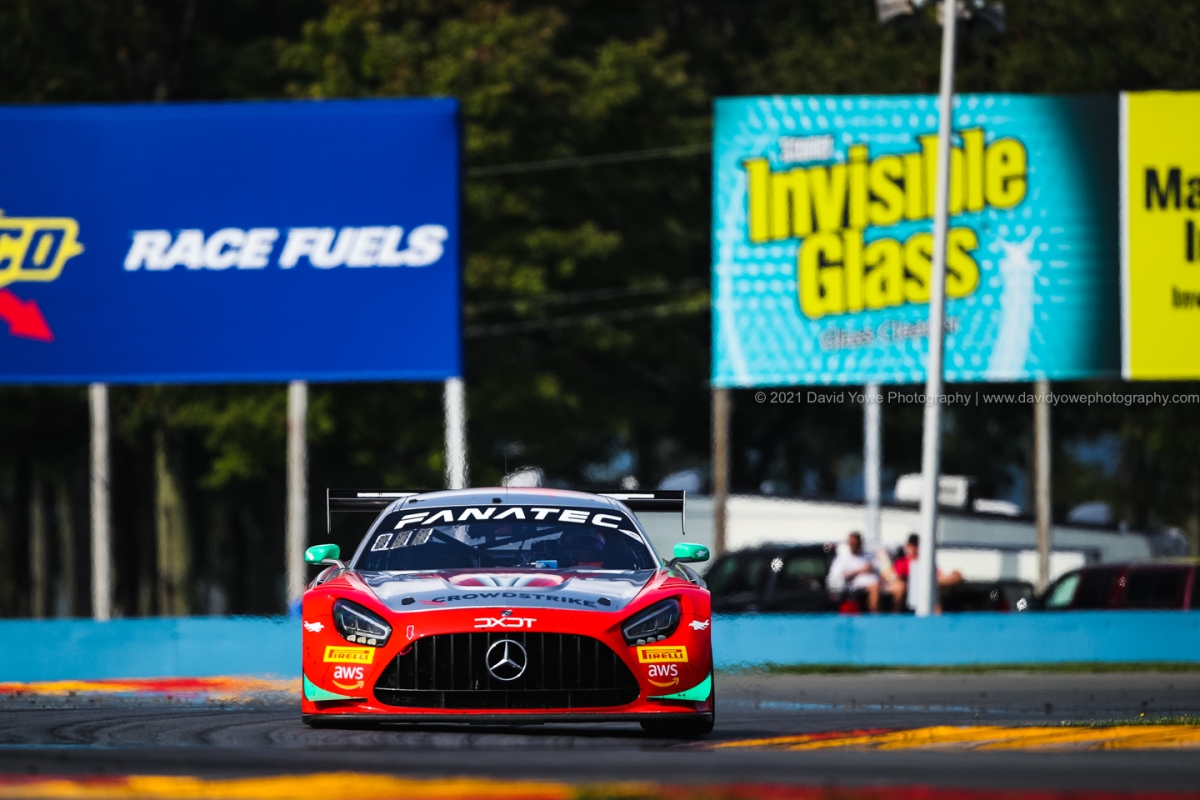 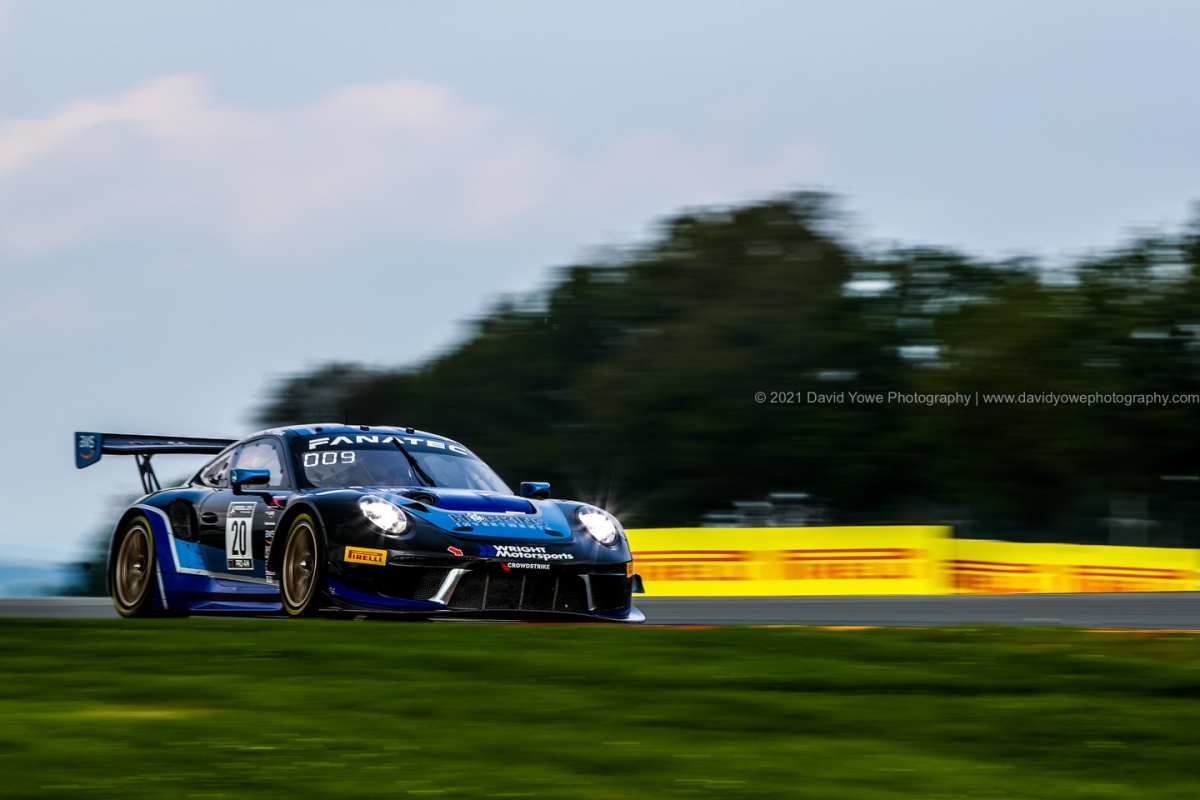 Was great watching the #20 Wright Motorsports Porsche 911 GT3-R 991.2 speed through and out of the Inner Loop. Really liked the black and different shades of blue livery on this car.

Towards the end of the session tried panning the cars as they moved through the Inner Loop at slow shutter speeds. Another shot of the #96 Turner Motorsport BMW F13 M6 GT3, this time in “art mode”.

For the 4.25 pm TC race, went to the top of the tower that overlooks the catch fencing for a wide shot of the Inner Loop, which gives you an idea of the U-shaped part of this track. 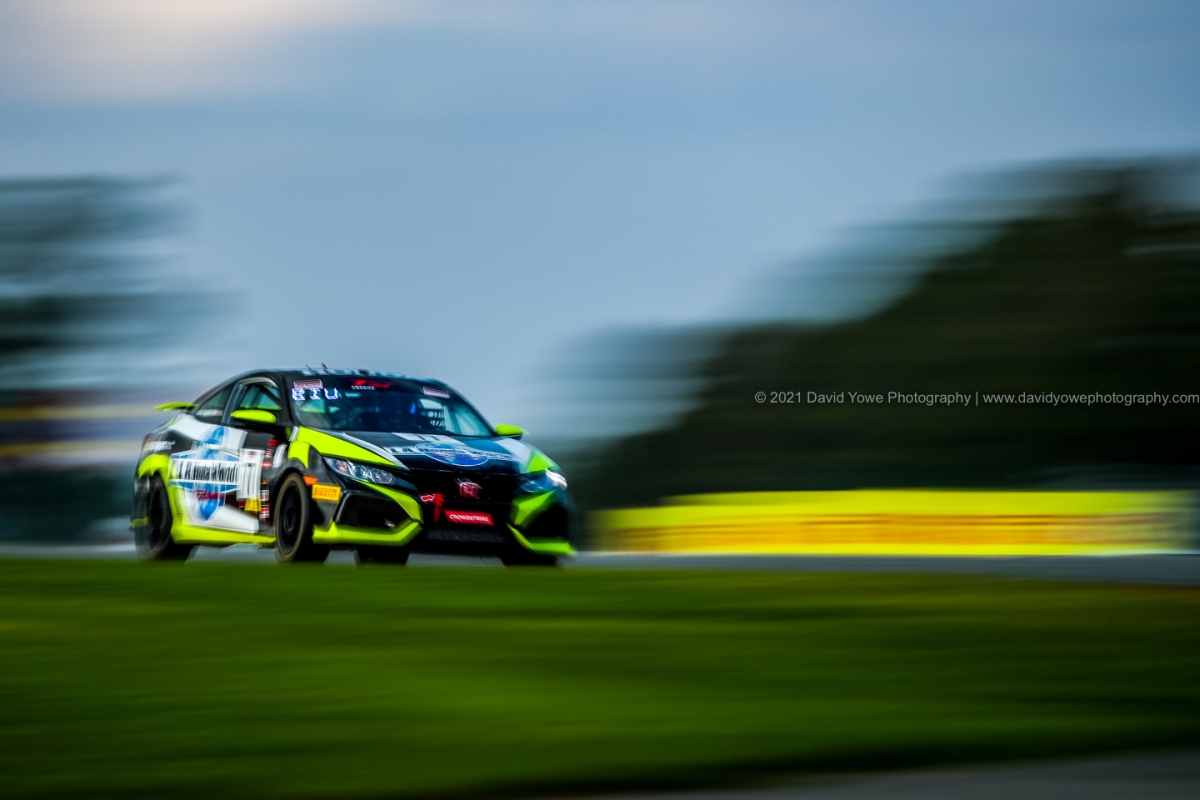 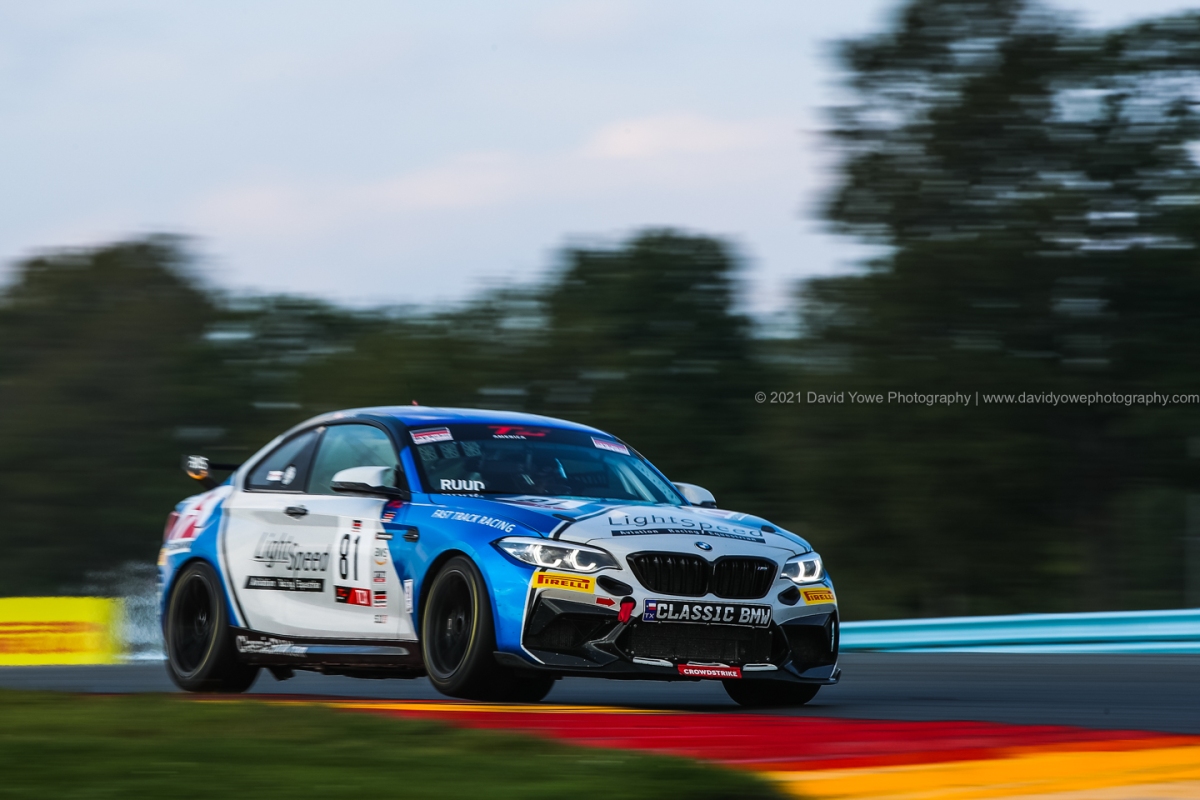 The TC cars may be smaller than the other SRO America classes, but they sure do fly. The #77 LA Honda World Racing Honda Civic Si (top) and #81 Classic BMW BMW M2 CS. The wide slick tires on the BMW looked really good.

For the GT America race at 5.20 pm, the setting sun was casting beautiful warm light on the track. The colorful livery on the side of the #88 Zelus Motorsports Lamborghini Huracan GT3 really stood out in this light. 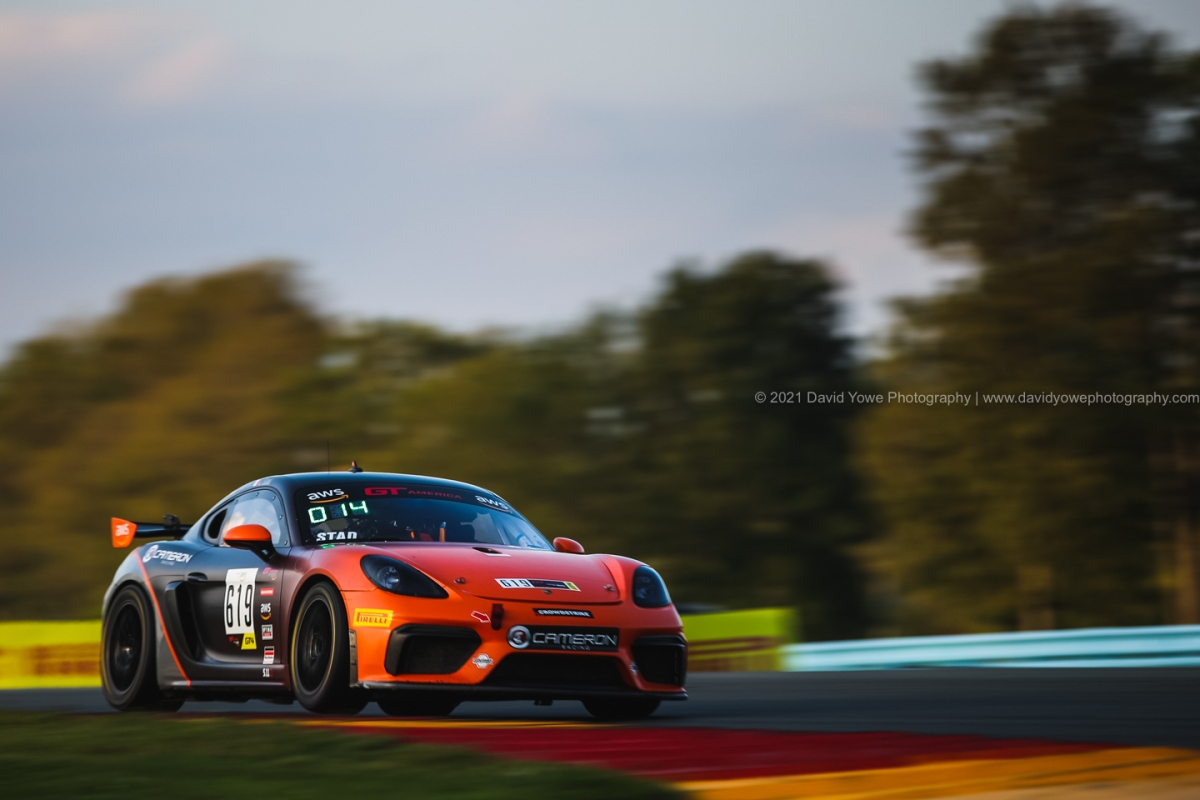 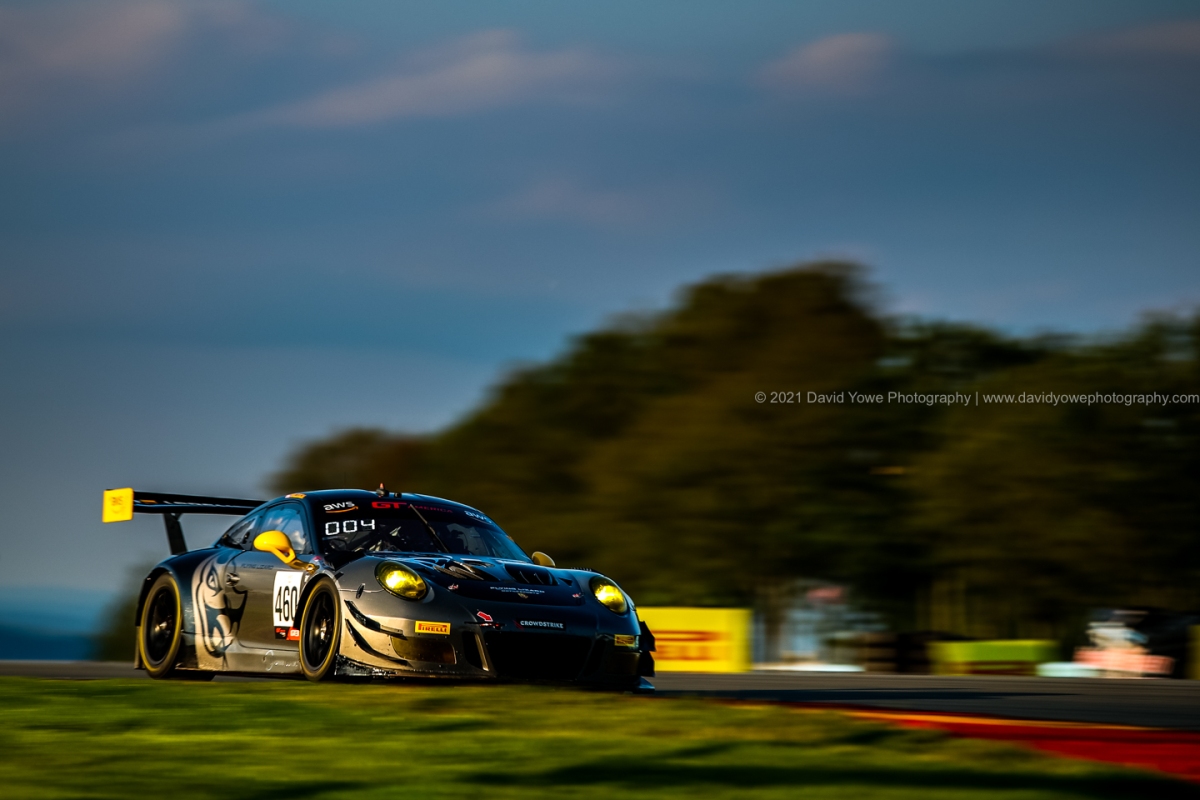 One of the last shots for the day was this one of the #460 Flying Lizard Motorsports Porsche 911.1 GT3 R.

After the race finished at 6.00 pm, walked back to the car, then drove to the media center. With other photographers, spent the next few hours downloading the days photos, editing, then uploading. Left the track around 11.00 pm for the drive back to the hotel. Really had a great day photographing, but by now was really tired, and was looking forward to a good nights sleep. Thanks for spending your time reading this blog.