The 65th annual running of the 12 Hours of Sebring and second round of the IMSA Weathertech Sportscar Championship was held on March 18. The #10 Konica Minolta Cadillac DPi-V.R Cadillac DPi with Ricky Taylor, Jordan Taylor, and Alexander Lynn took top honors after 12 hours of racing. For this blog I’ve chronicled my race day experiences to give to you an idea what’s its like to be here from morning to night. Hope you like the photos.Left the hotel in Bartow around 5.30 am for the one hour drive to Sebring International Raceway. Along the way grabbed breakfast, “two sausage muffins with no cheese and egg”! Arrived at Gate 4 and drove into the Ulmann parking area. Since the track was cold we were able to walk cross the back straight into the paddock, then to the media trailer for the 7.00 am mandatory photo meeting.

Sunrise in the paddock

Around 7.30 am left the media trailer and headed to the area near the Turn 17 end of the paddock where the race cars leave there garages and head to the track for the warm-up session. At this time of the morning the sun is rising in the background and the low early morning yellow light silhouettes the cars as they approach you. This shot was originally done by a leading motorsport photographer and has been a popular spot to capture the cars ever since.

One of my favorite shots. The #10 Konica Minolta Cadillac DPi-V.R Cadillac DPi looked like a spaceship with the beautiful light outlining the shape of this cool looking race car. The light was so low that it illuminated the underside of the car and rear wing. 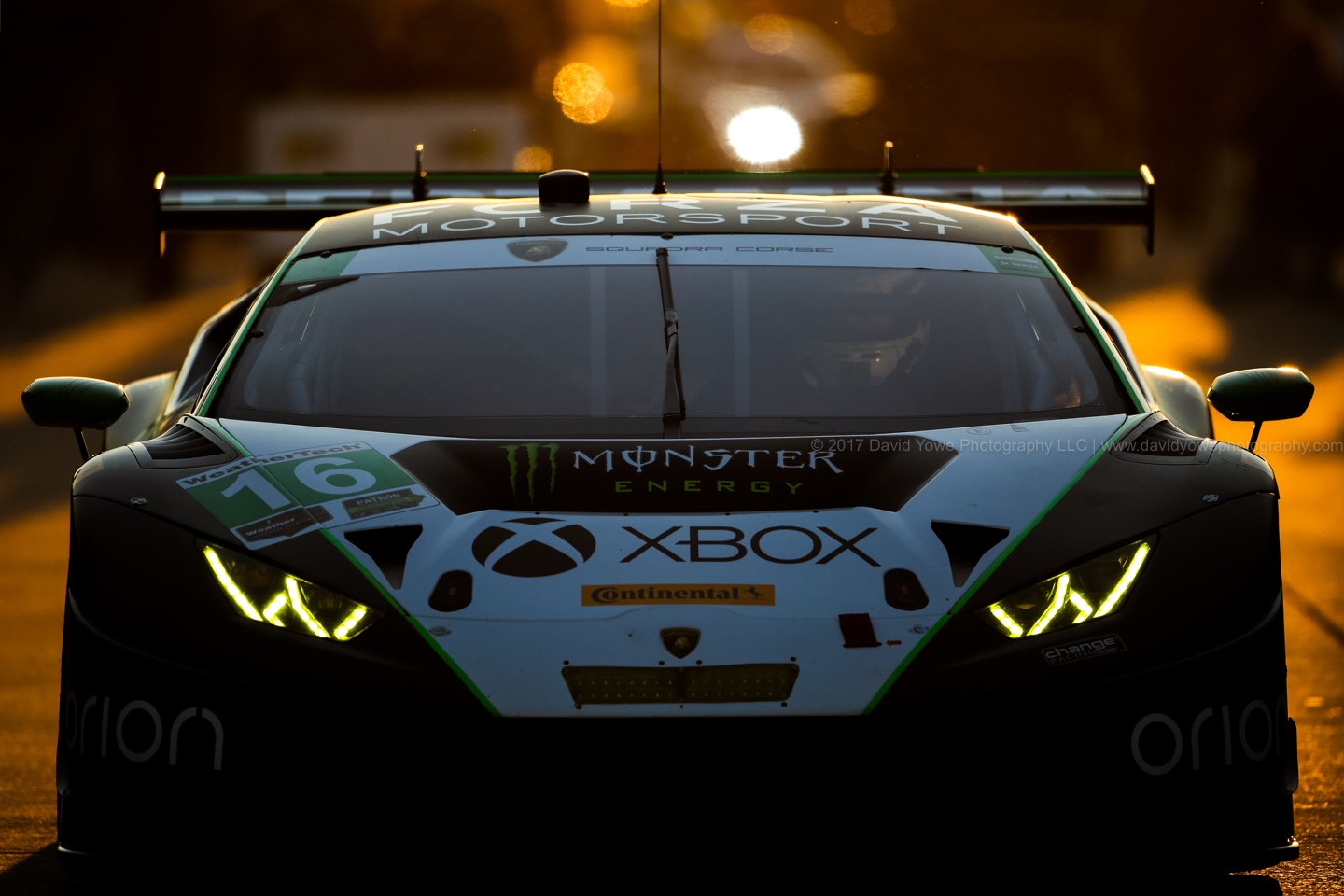 I liked how the bokeh created by the lens looked like an “exhaust of light” behind the #16 Change Racing Lamborghini Huracan GT3. 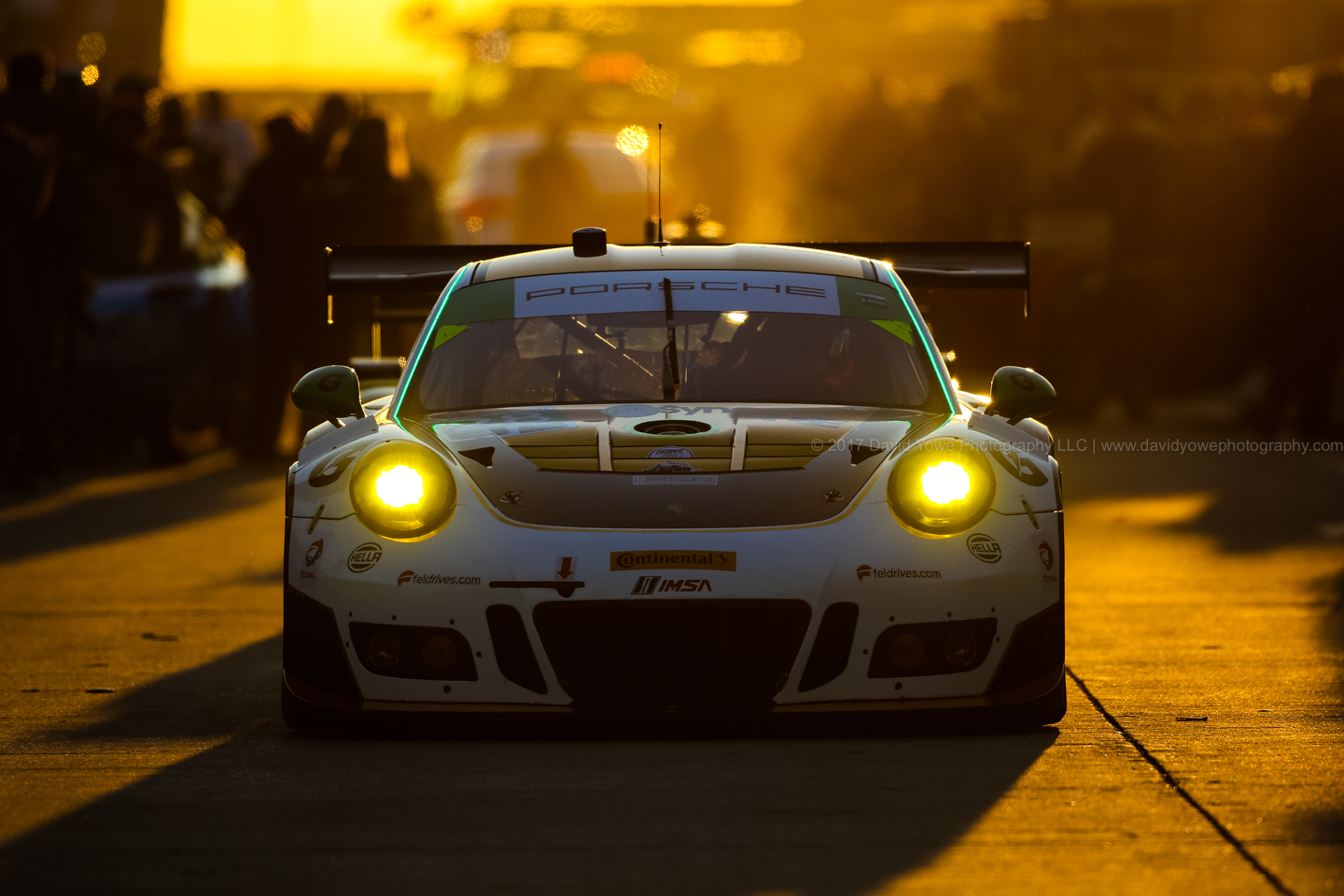 The yellow lights of the #28 Alegra Motorsports Porsche 911 GT3 R matched the golden colored back lighting. 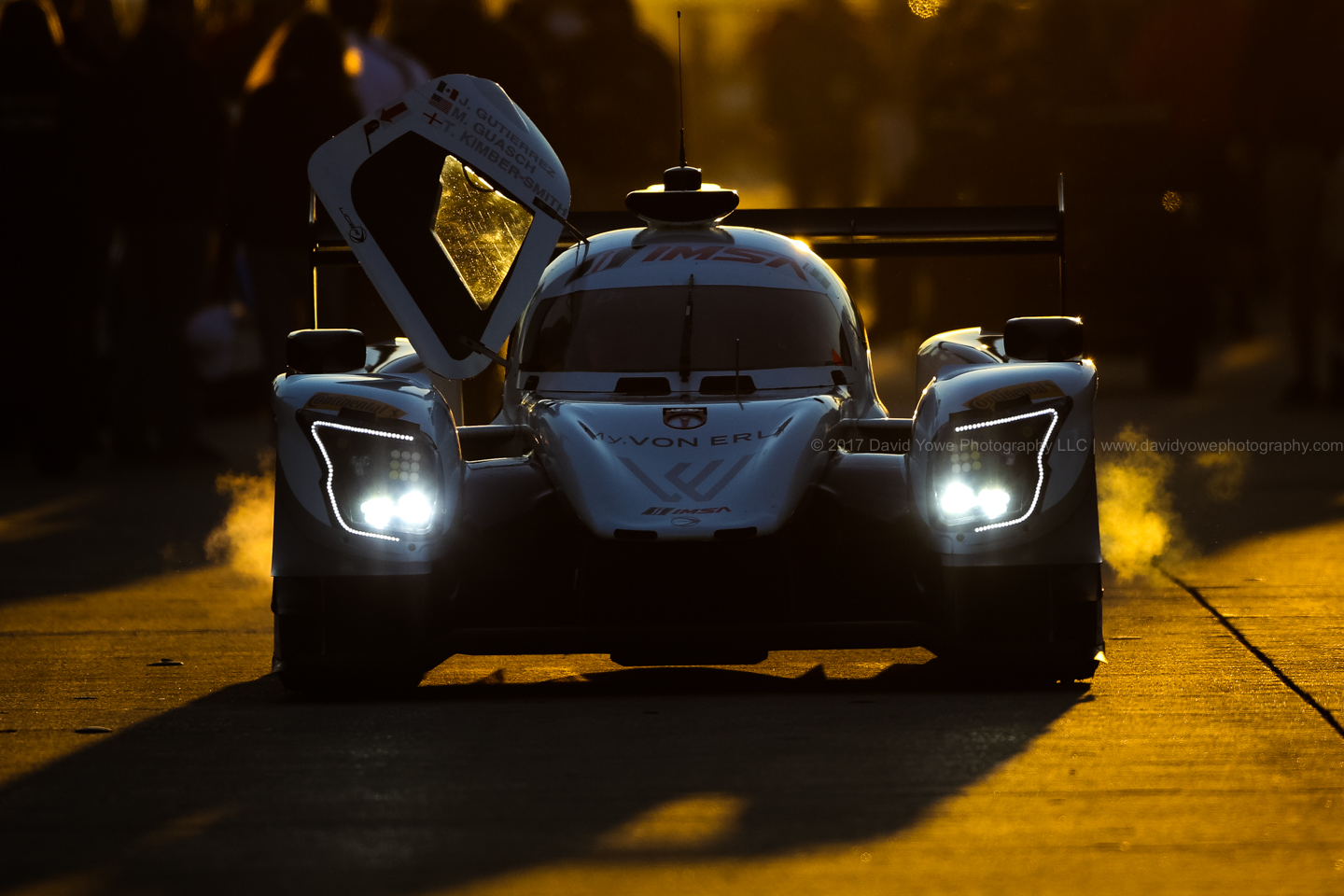 Was cool seeing steam come from the rear wheels of the #52 PR1/Mathiasen Motorsports Ligier as it was heading down the paddock.

The #29 Montaplast by Land-Motorsport Audi R8 LMS GT3 was bathed in golden light as the sun got higher in the sky.

At about 7.50 am headed to the inside of Turn 17 for panning shots of the cars as they go through this high speed turn onto the front straight. This is a great time of day to photograph the cars in this area since they are front lit with the early morning light and the iconic Château Élan Hotel is in the background. The #11 GRT Grasser Racing Team Lamborghini Huracan GT3 with Christian Engelhart, Mirko Bortolotti, Rolf Ineichen, or Richard Antinucci. 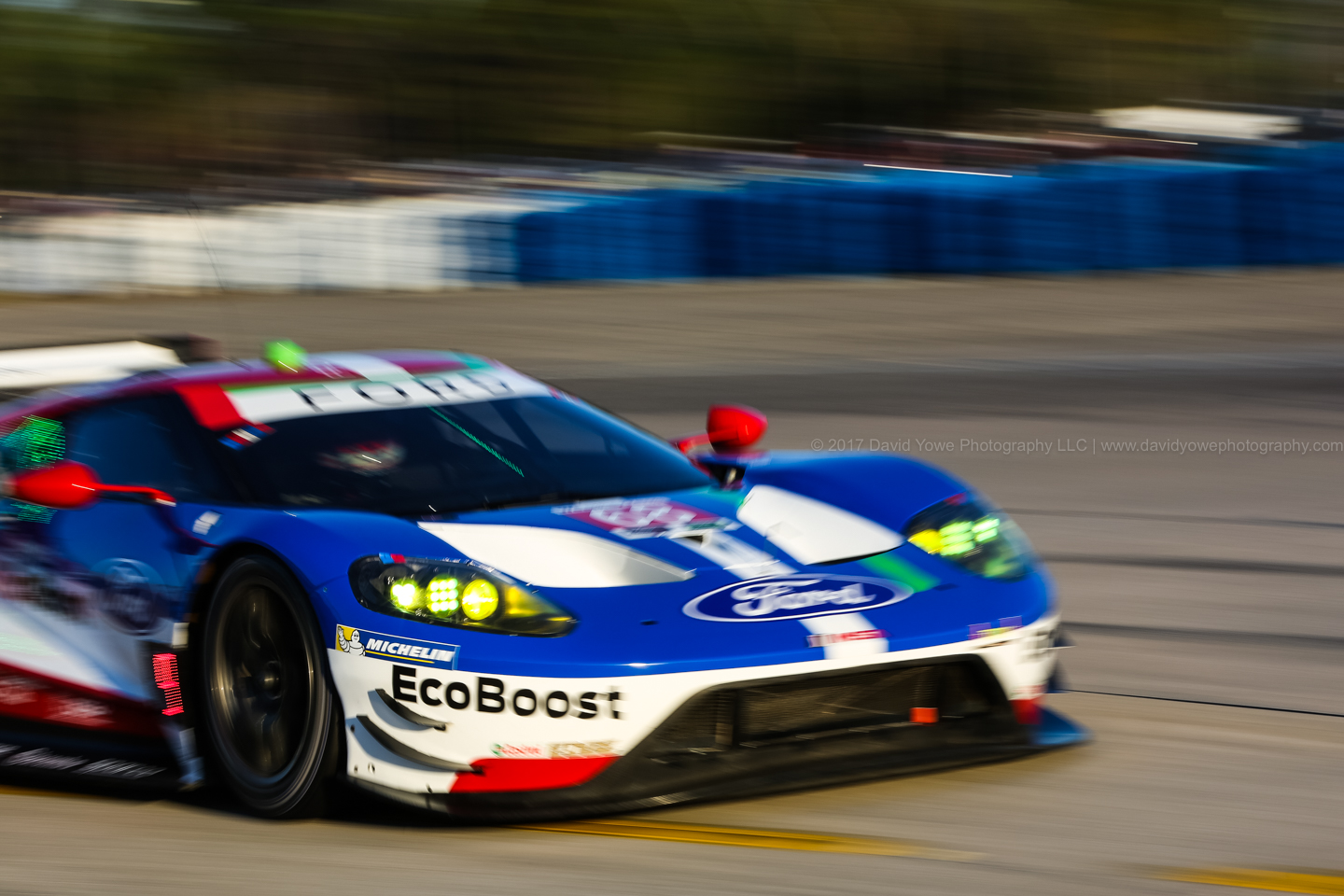 You can also get some close 3/4 front panning shots of the cars as they exit Turn 17. The #68 Ford Chip Ganassi Racing Ford GT with Stefan Mucke, Olivier Pla, or Billy Johnson. 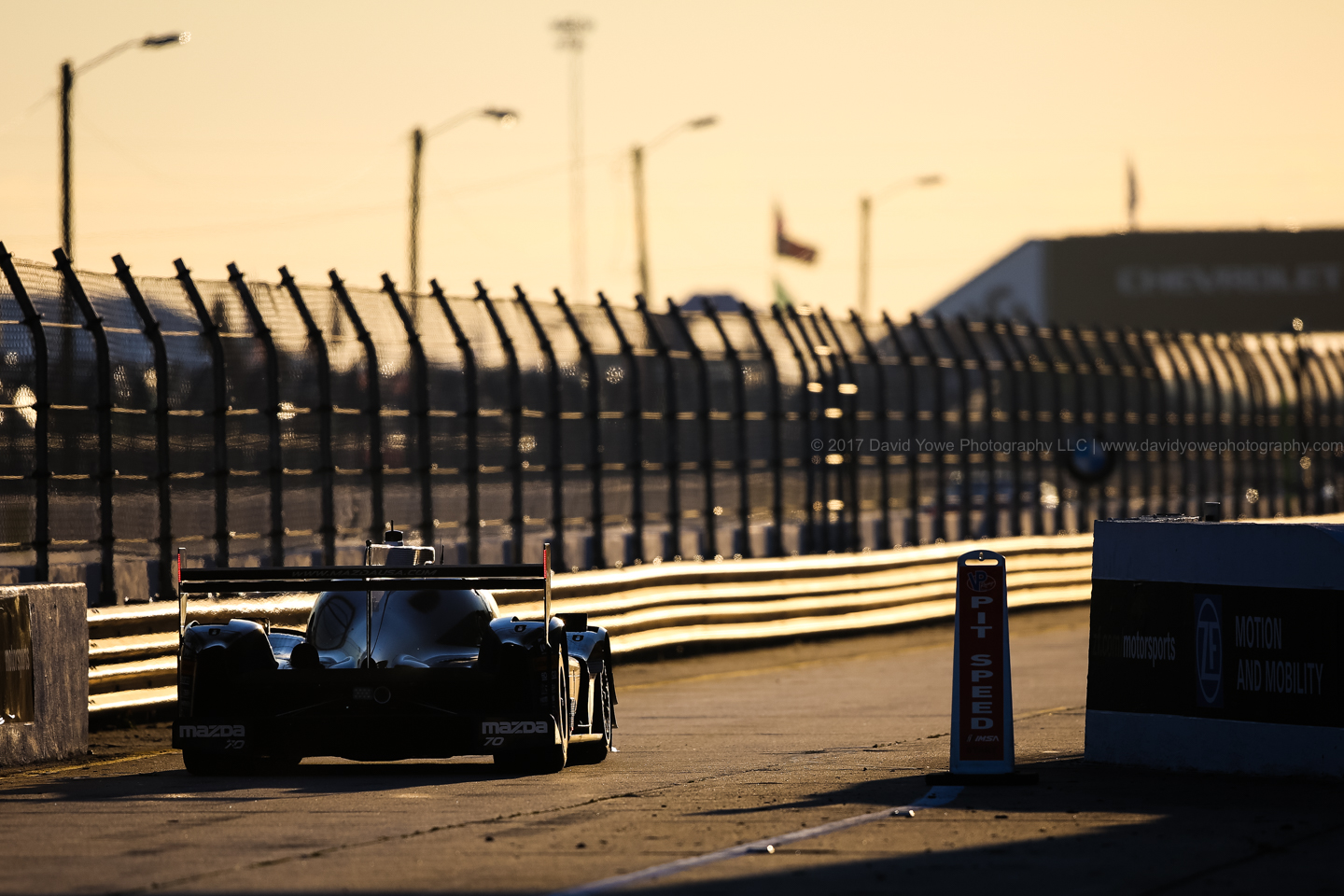 At the end of the warm-up session walked along the inside of the front straight and took some shots of the cars as they entered pit lane.

Headed back to the media trailer, grabbed a quick bite to eat, then entered pit lane near the walkover bridge at the Fangio Terrace end. Was able to get to pit lane before the fans entered this area, so spent some time photographing the teams preparing the cars and getting them into position for the fan grid walk. 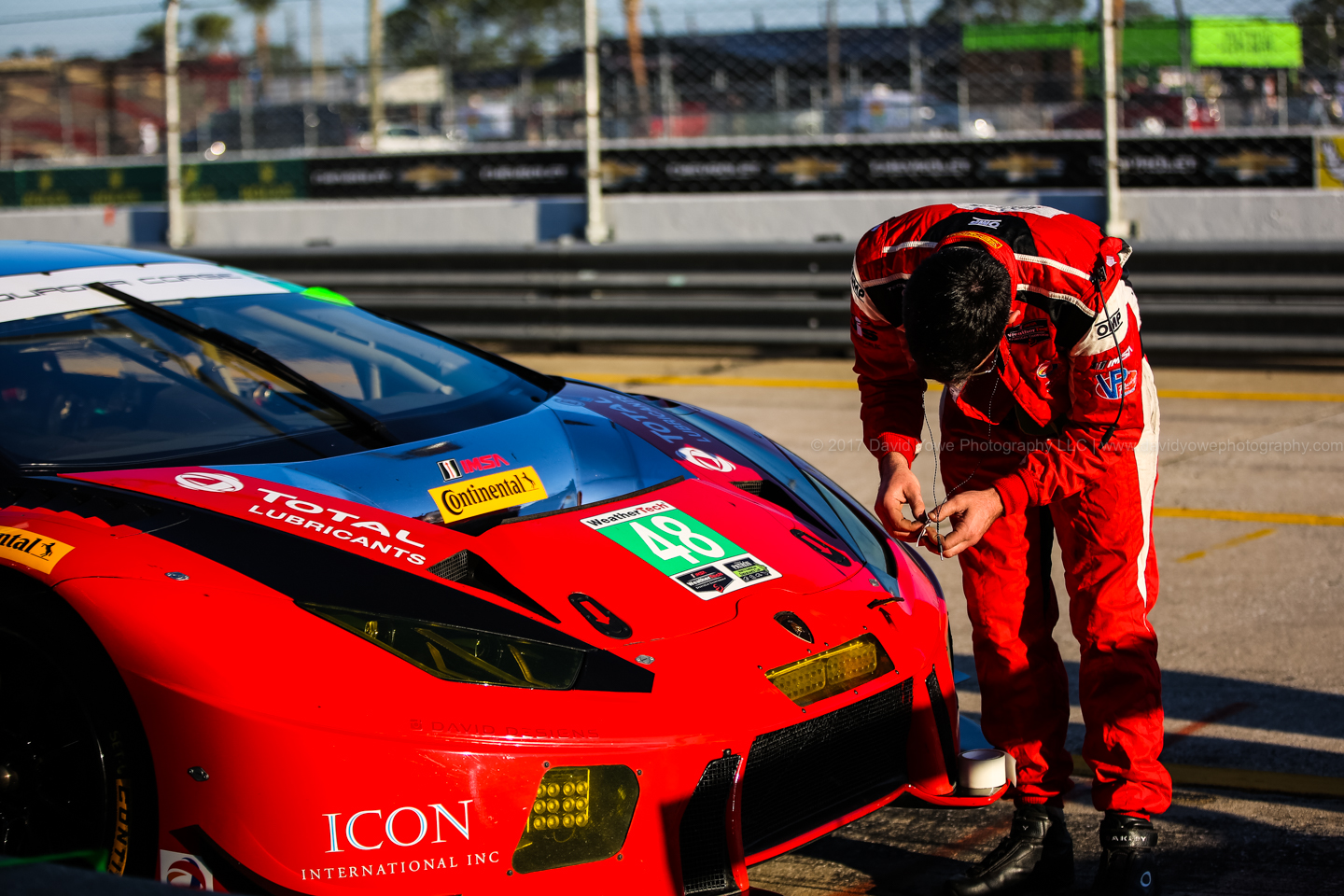 The #48 Paul Miller Racing Lamborghini Huracan GT3 team were adding decals to the hood of the car. 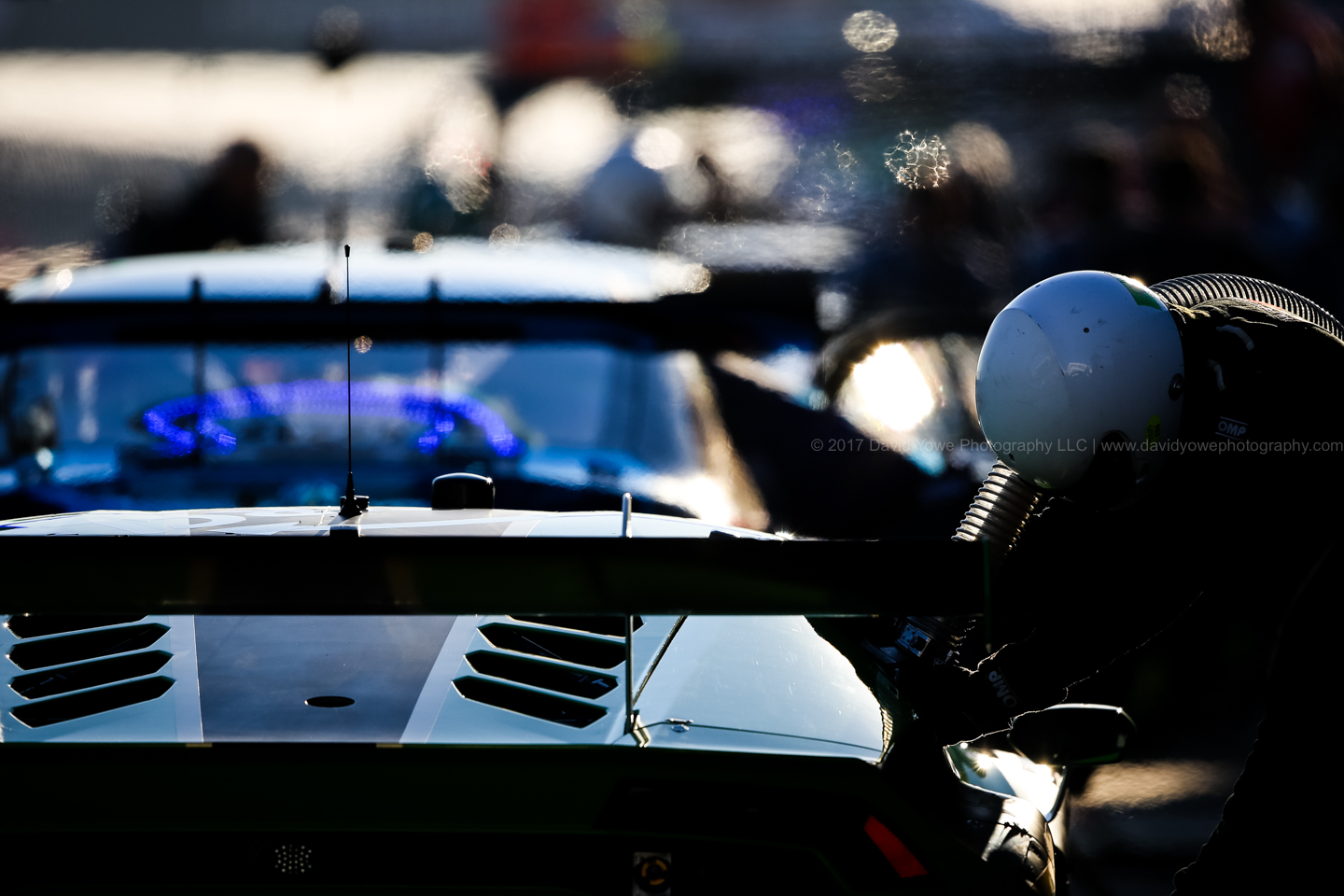 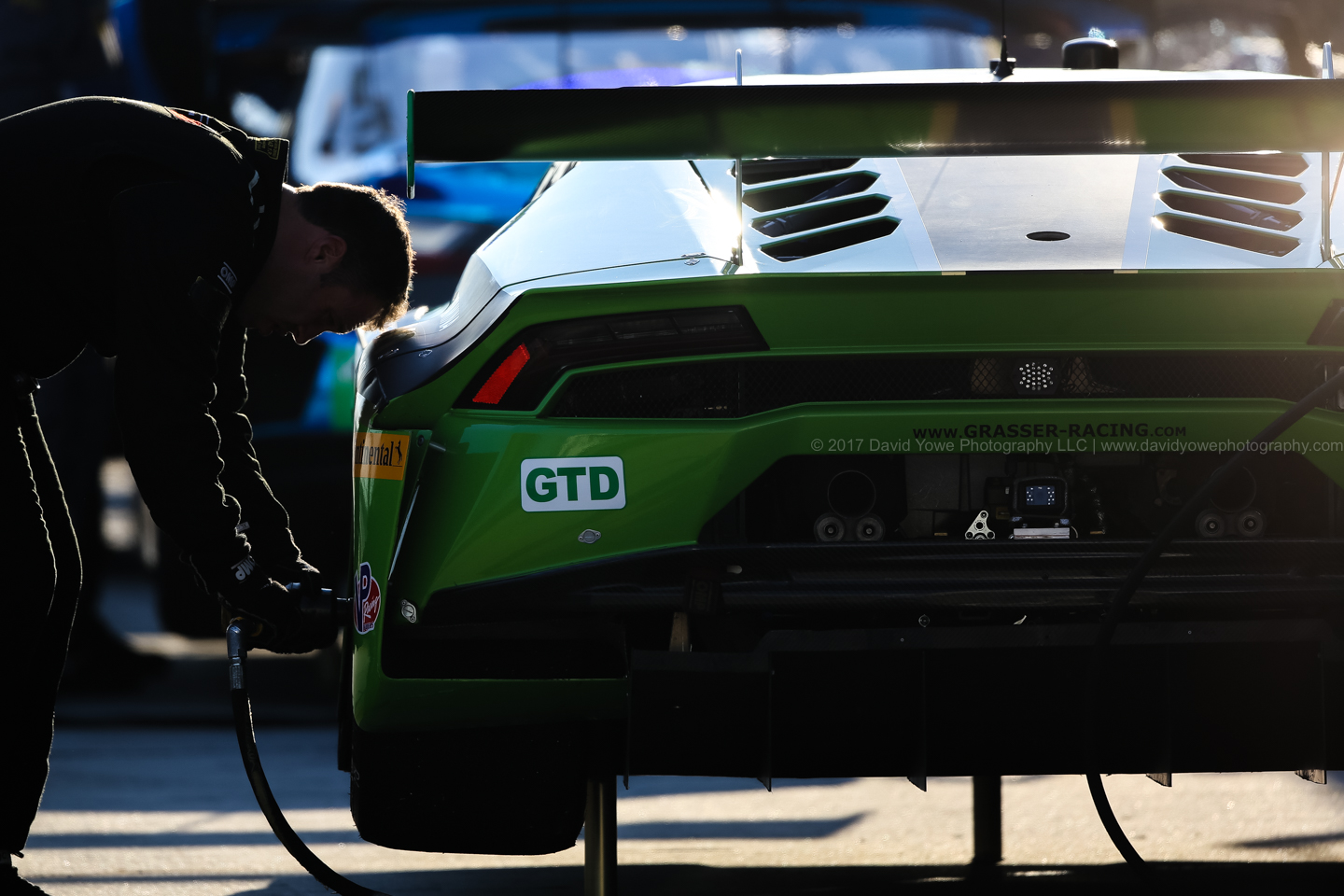 Really liked how the light and shadows interacted with the angular lines of the #11 GRT Grasser Racing Team Lamborghini Huracan GT3. 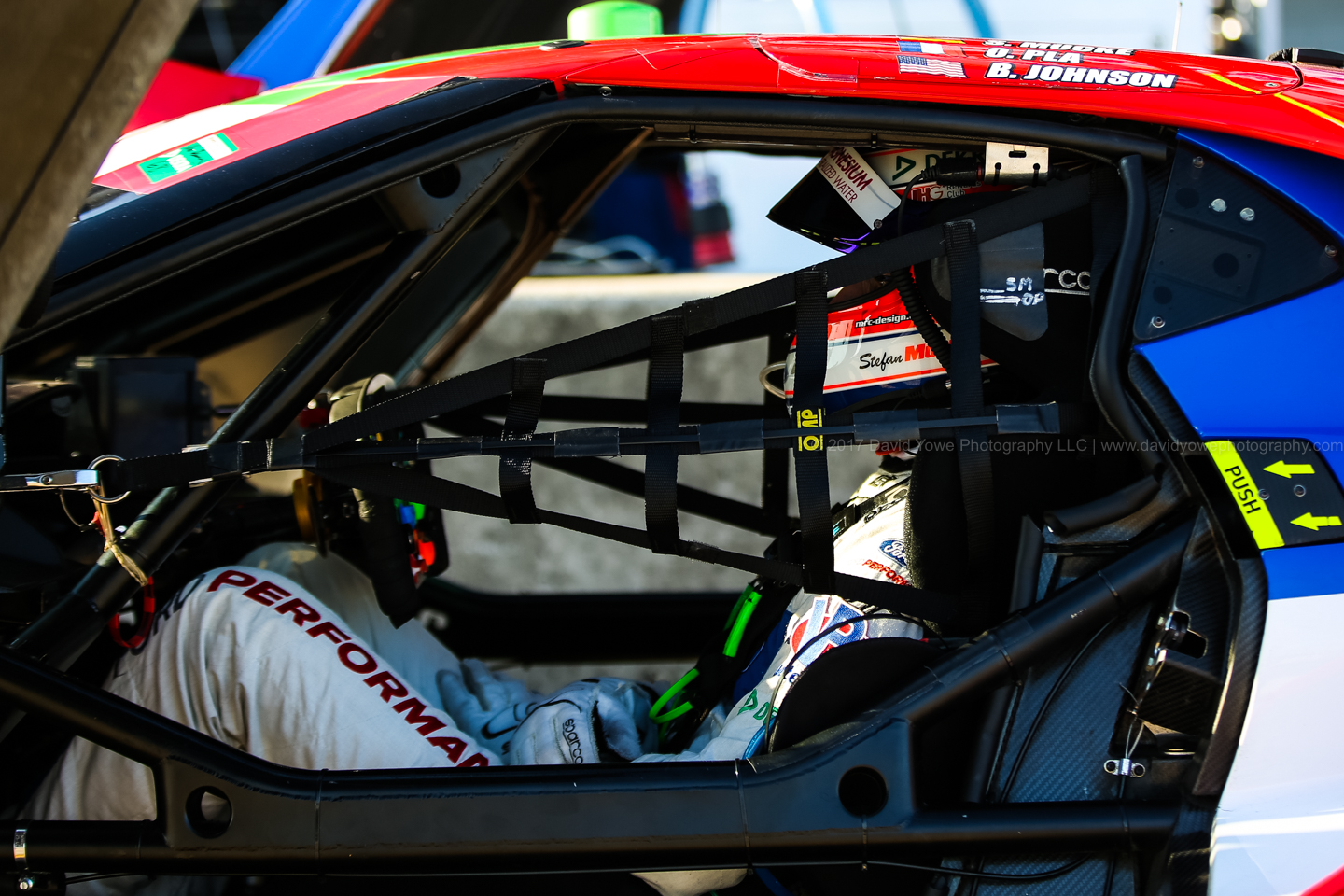 Neel Jani was in the pilots seat of the #13 Rebellion Racing ORECA. 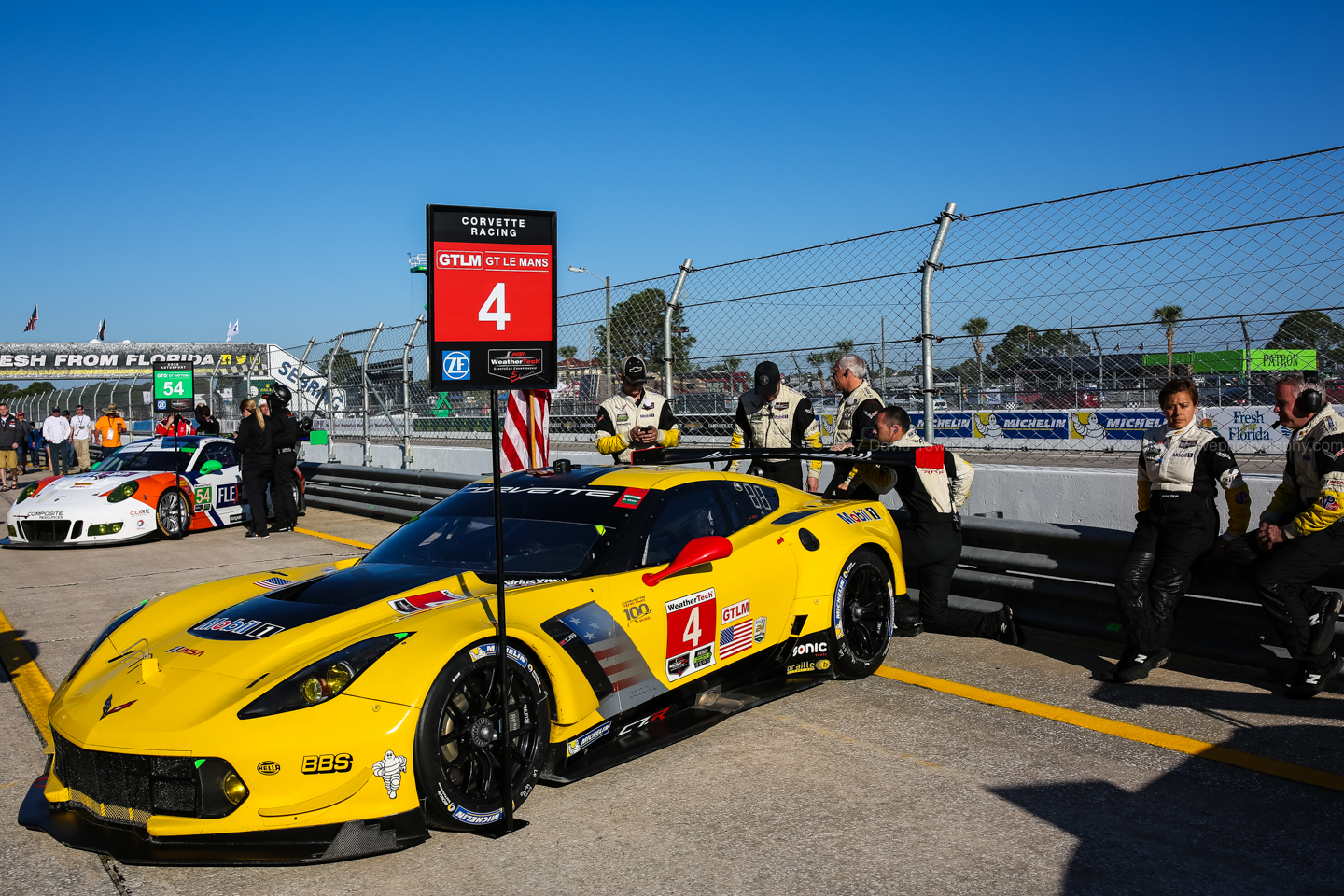 The beautiful metallic blue paint work on the #15 3GT Racing Lexus RCF GT3. By the time I reached the end of the pit walk it was around 10.00 am, so headed back to the media trailer to grab a bite to eat and the 500mm lens, then went to the outside of Turn 1 for the race start. 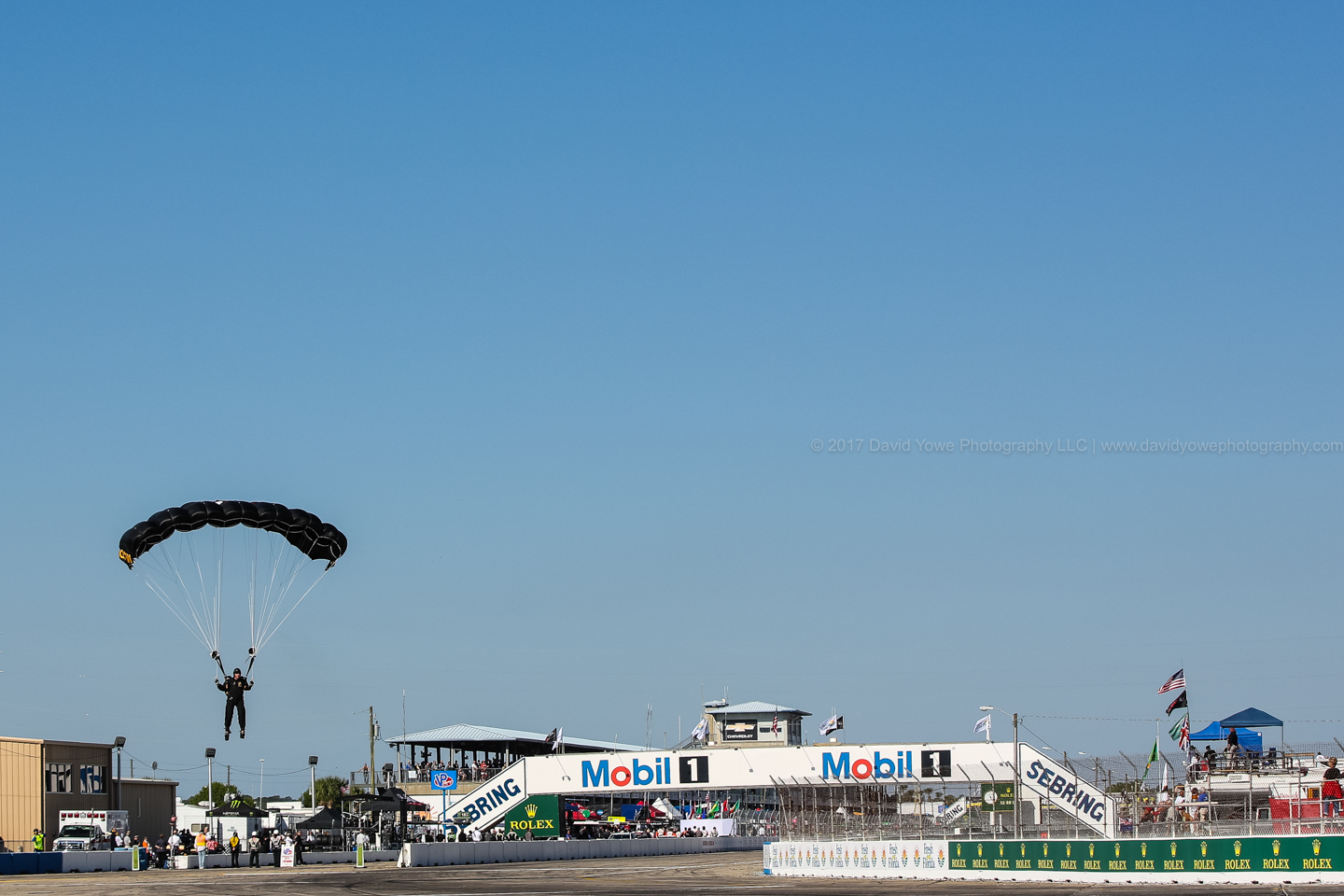 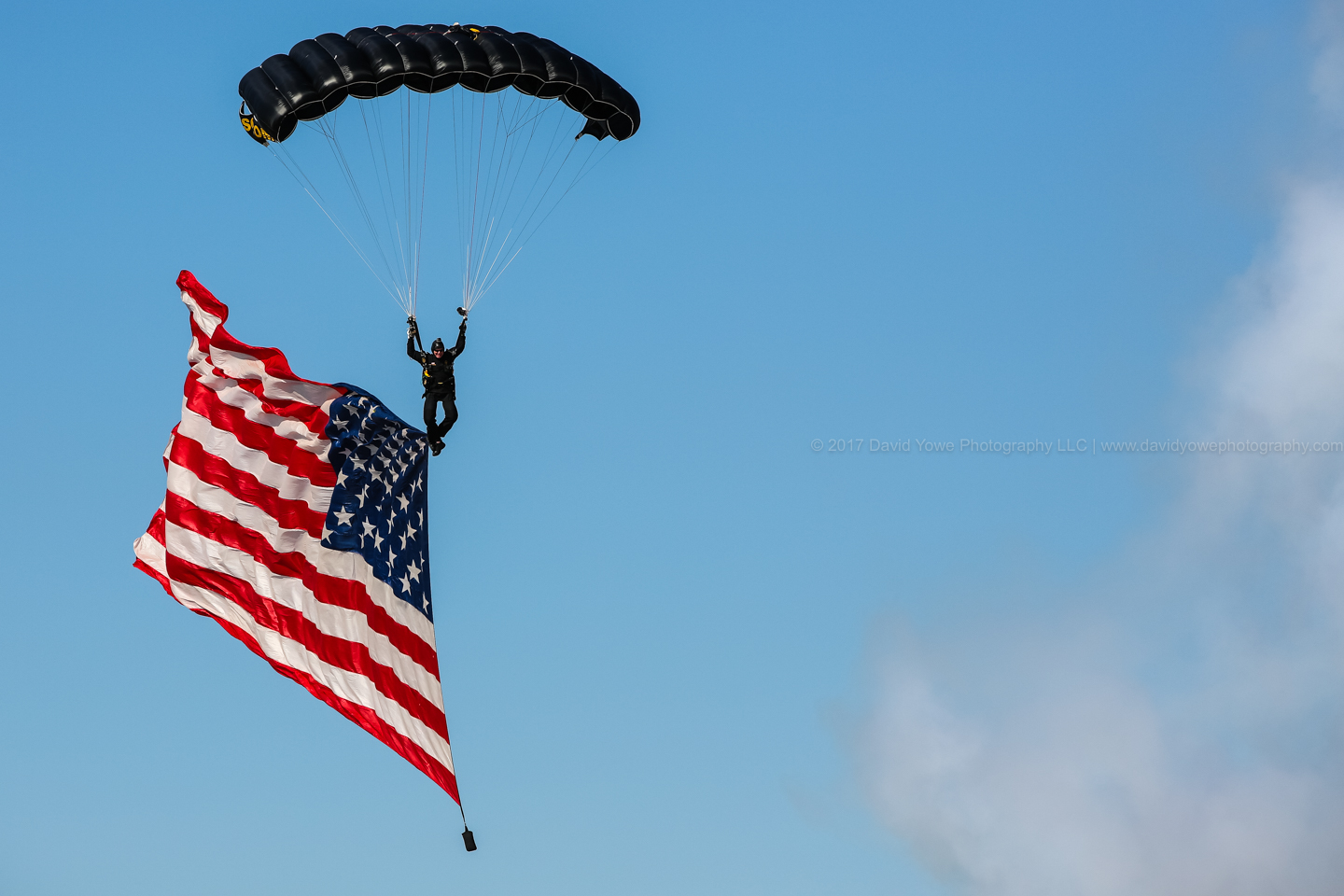 The vantage points at the outside of Turn 1 which look directly down the front straight were popular with photographers, so went to a location to the right, for a different point of view. During the pre-race, parachutists made pin-point landings on the front straight at Turn 1.

After the race started, went to the part of Turn 1 where you can get shots of the cars speeding down the front straight towards you.

After getting shots of the cars coming down the front straight, headed to my right for photos of the cars entering and exiting Turn 1. Thought the #52 PR1/Mathiasen Motorsports Ligier with Michael Guasch, Jose Gutierrez, or Tom Kimber-Smith would look good in black and white. 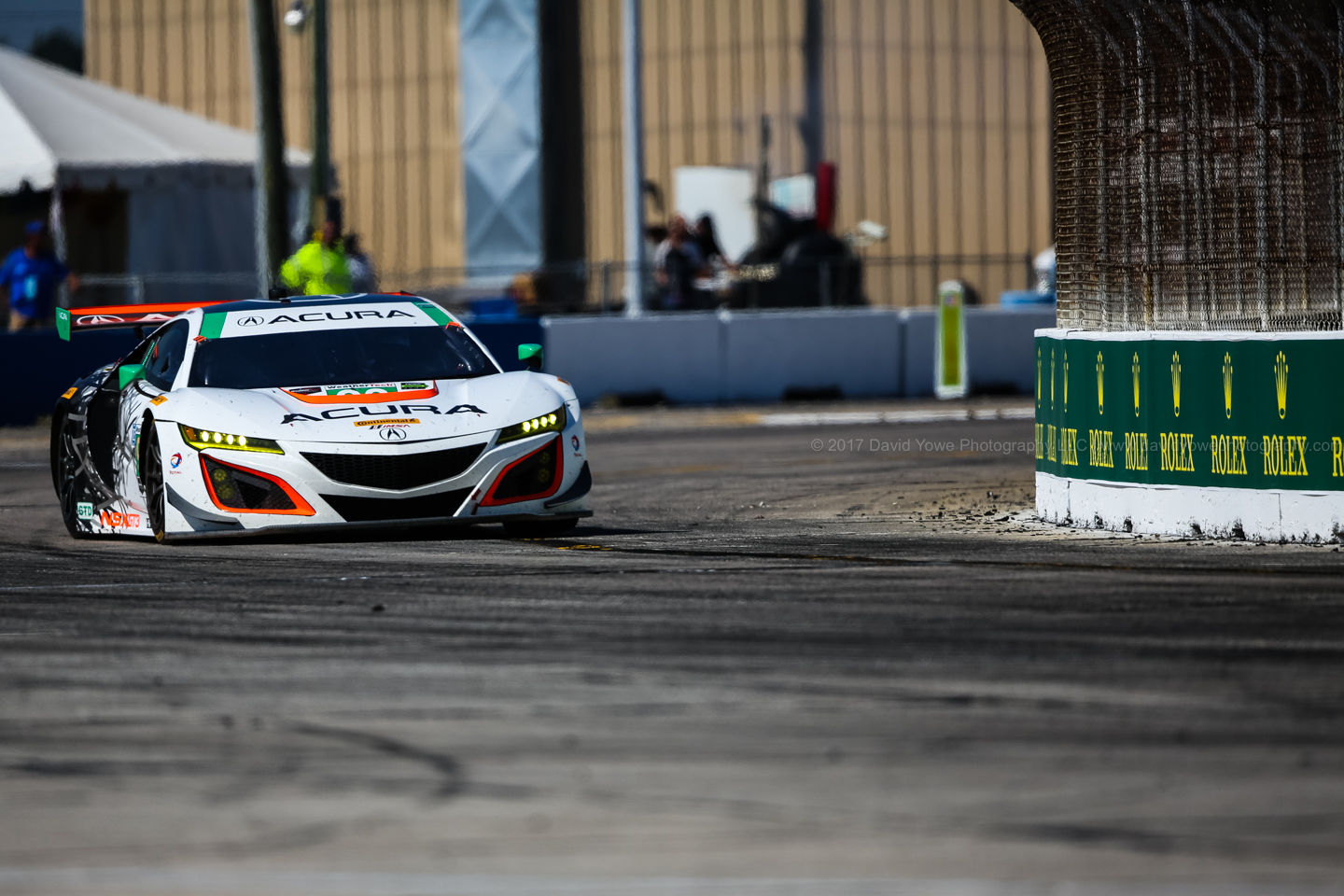 Along the Turn 1 to 2 straight with the #55 Mazda Motorsports Mazda DPi and Tristan Nunez, Jonathan Bomarito, or Spencer Pigot.

Kept walking from Turn 1 to 3.

Spectators had a good view of the #38 Performance Tech Motorsports ORECA FLM09 with James French, Patricio O’Ward, or Kyle Masson exiting this corner. 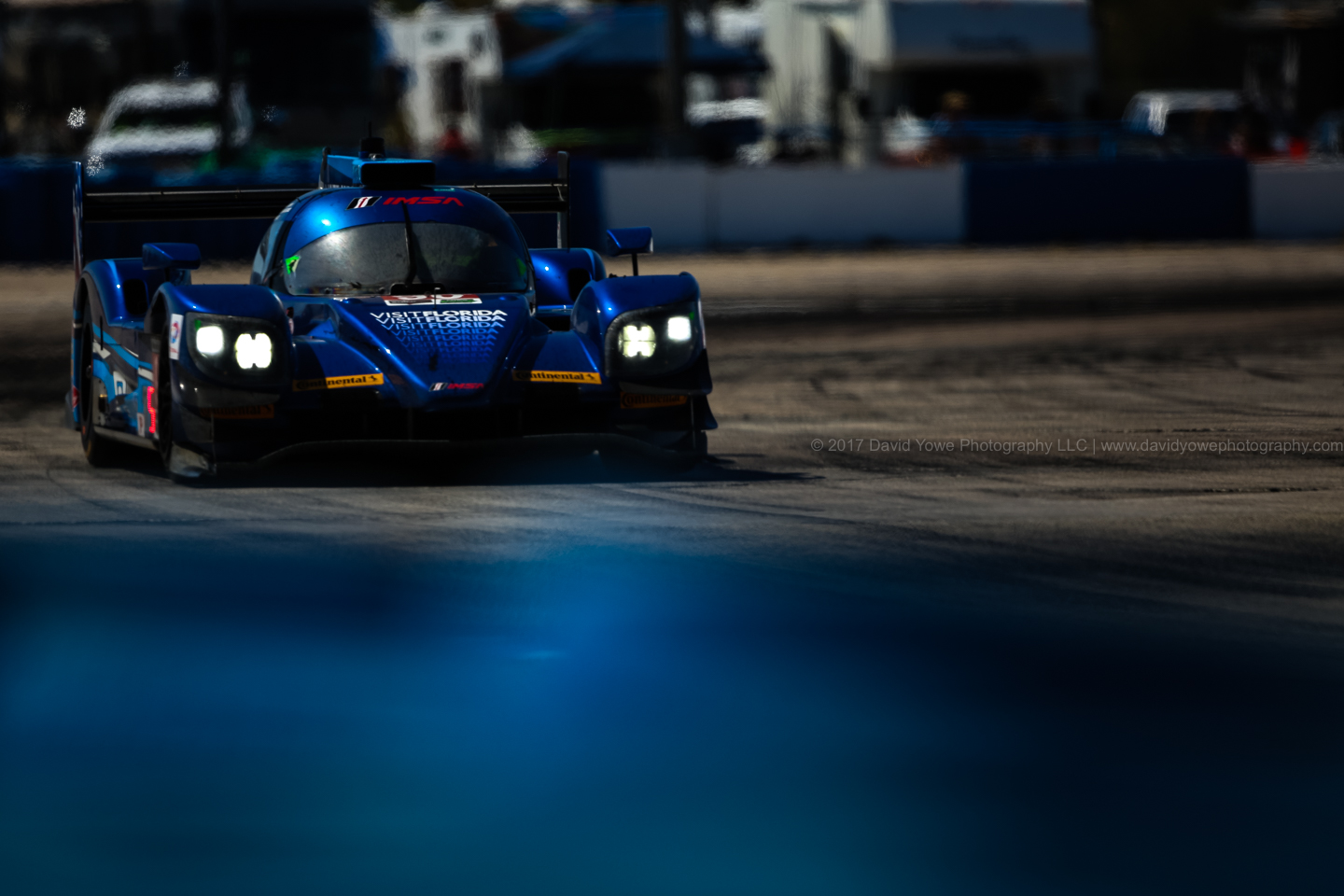 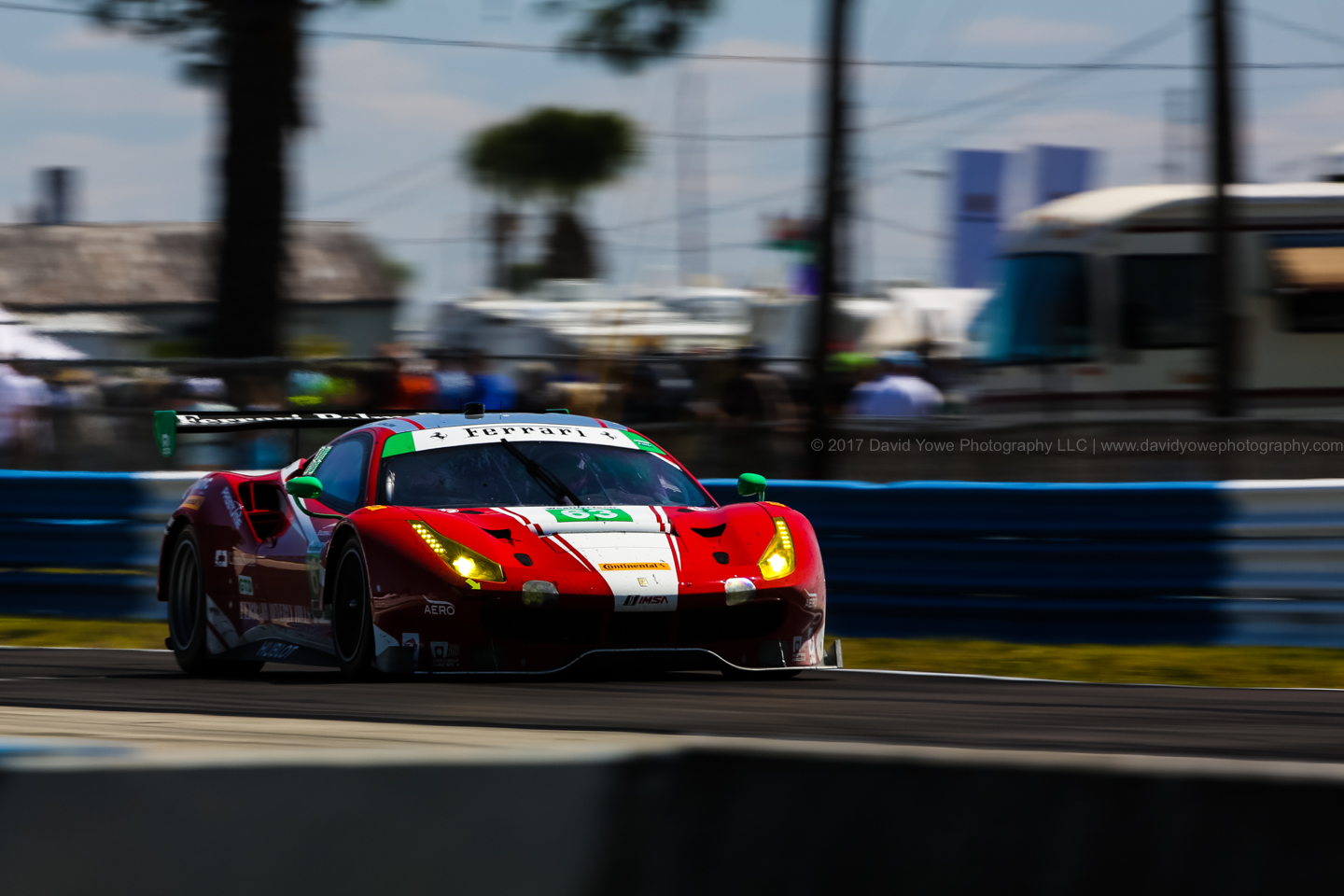 By now its was around 12.30 pm, so decided to catch the photo shuttle to the media trailer for lunch. Along the way, the photo shuttle stopped at the inside of Turn 7. Noticed their were several leading motorsport photographers at this location and said to myself, “their must be a good reason why they are shooting at this location”, so got out of the photo shuttle and checked out this location. Decided to use the 500mm lens to pan the cars as they sped down the straight into Turn 7, since really liked how the sun lit the front of the cars and cast the rest of the car in shadows. The front-lit car also contrasted well with the shadowed background. The #63 Scuderia Corsa Ferrari 488 GT3 with Christina Nielsen, Alessandro Balzan, or Matteo Cressoni.

Also tried some shots of the cars as they approached the tire barrier at Turn 7, since it created an artistic element in the foreground of the photo. The #912 Porsche GT Team Porsche 911 RSR and Kevin Estre, Laurens Vanthoor, or Richard Lietz. 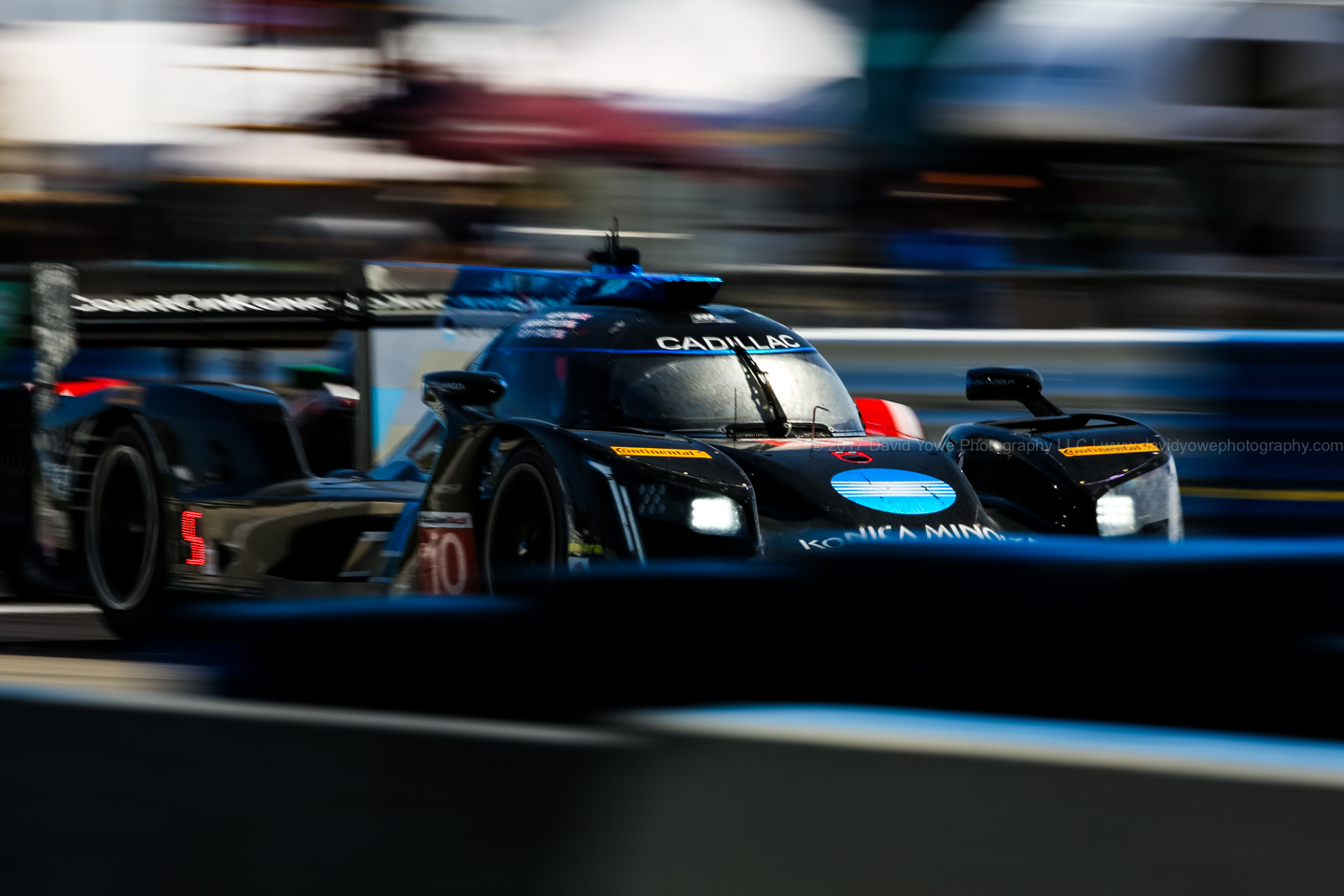 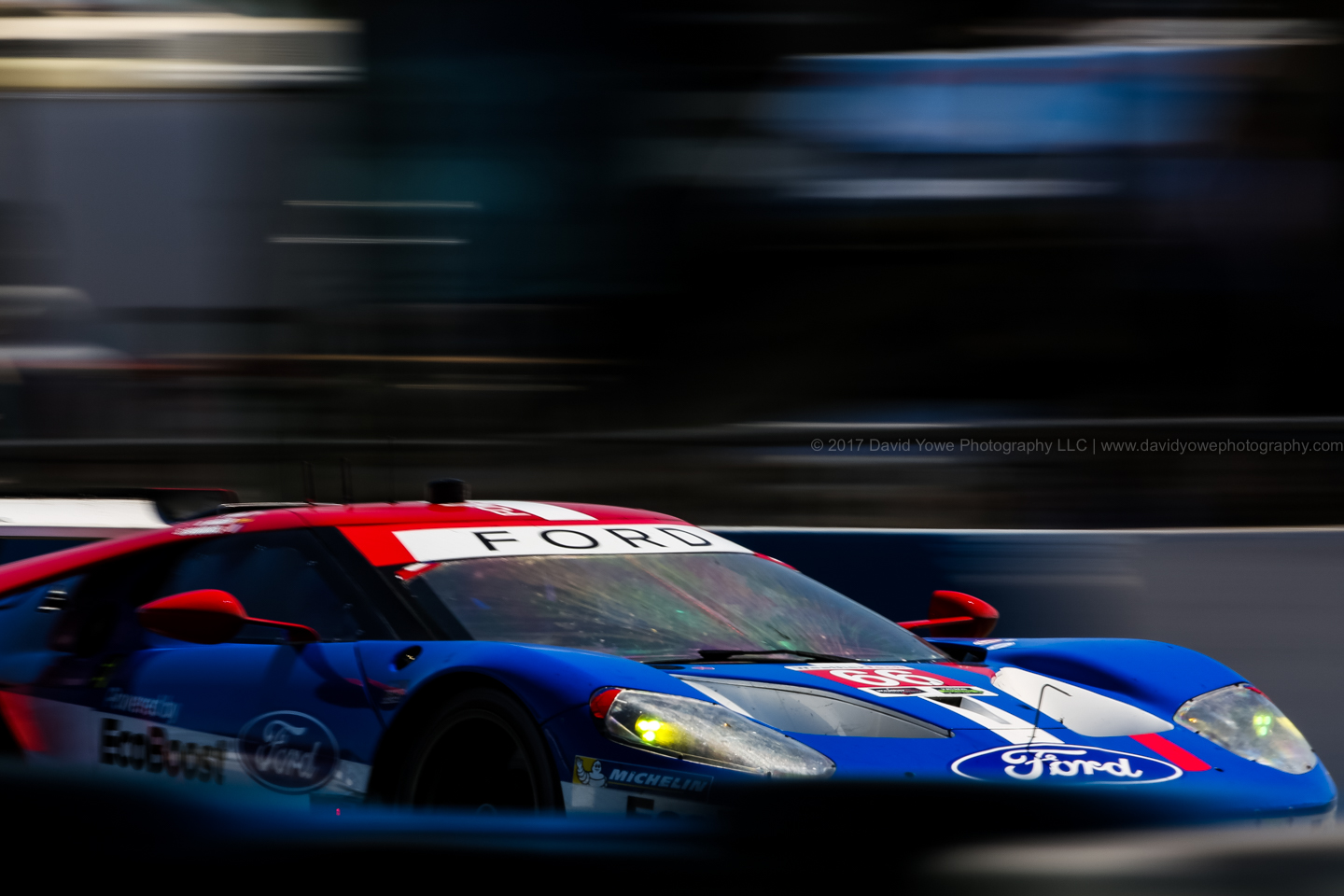 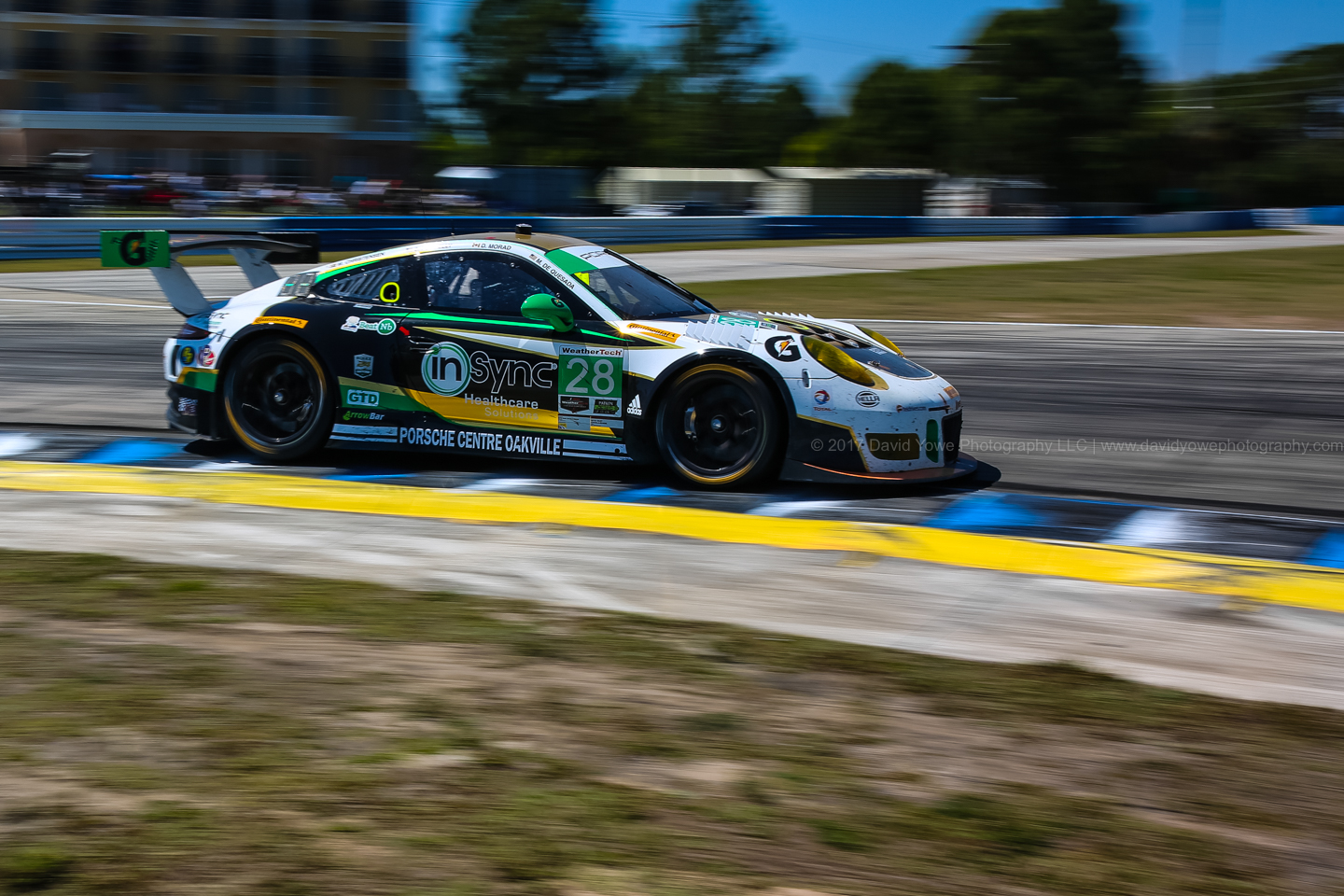 You can also get some panning shots of the cars they go around the Turn 7 hairpin. The #28 Alegra Motorsports Porsche 911 GT3 R with Carlos de Quesada, Michael Christensen, Daniel Morad, or Spencer Pumpelly.

After spending some time in this area I could see why its a popular location for fans to see the track action. Caught the photo shuttle back to the media trailer for lunch and to edit and upload photos for my client. 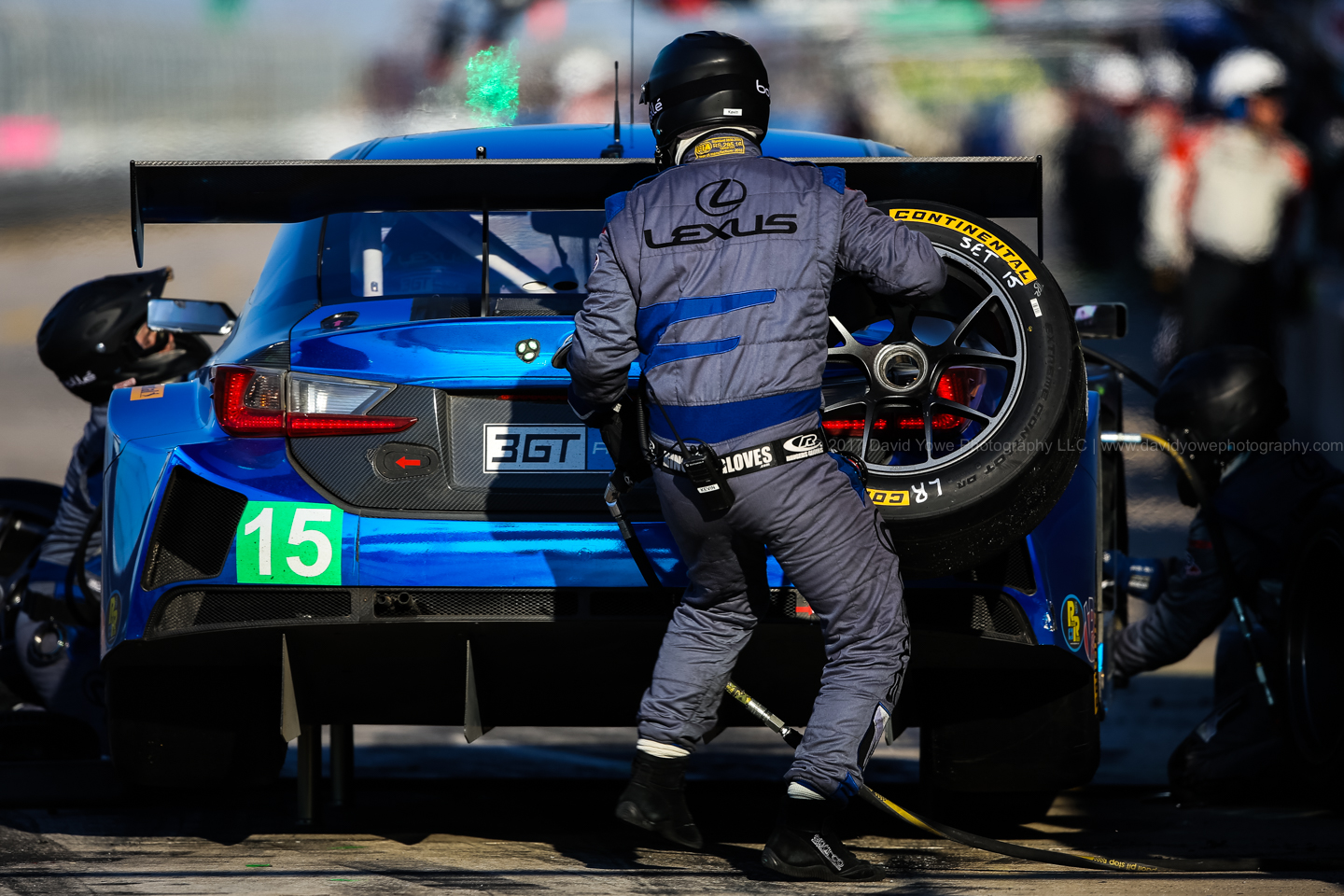 Around 5.00 pm left the Media Trailer and went to pit lane for shots of the cars being worked on by there crews. Started at the overhang near the entrance of pit lane underneath the Follow Fresh Florida walk over bridge, since this enabled a direct view down pit lane. Crew working on the #15 3GT Racing Lexus RCF GT3.

Was cool to see the #46 EBIMOTORS Lamborghini Huracan GT3 burn rubber as it exited its pit box. 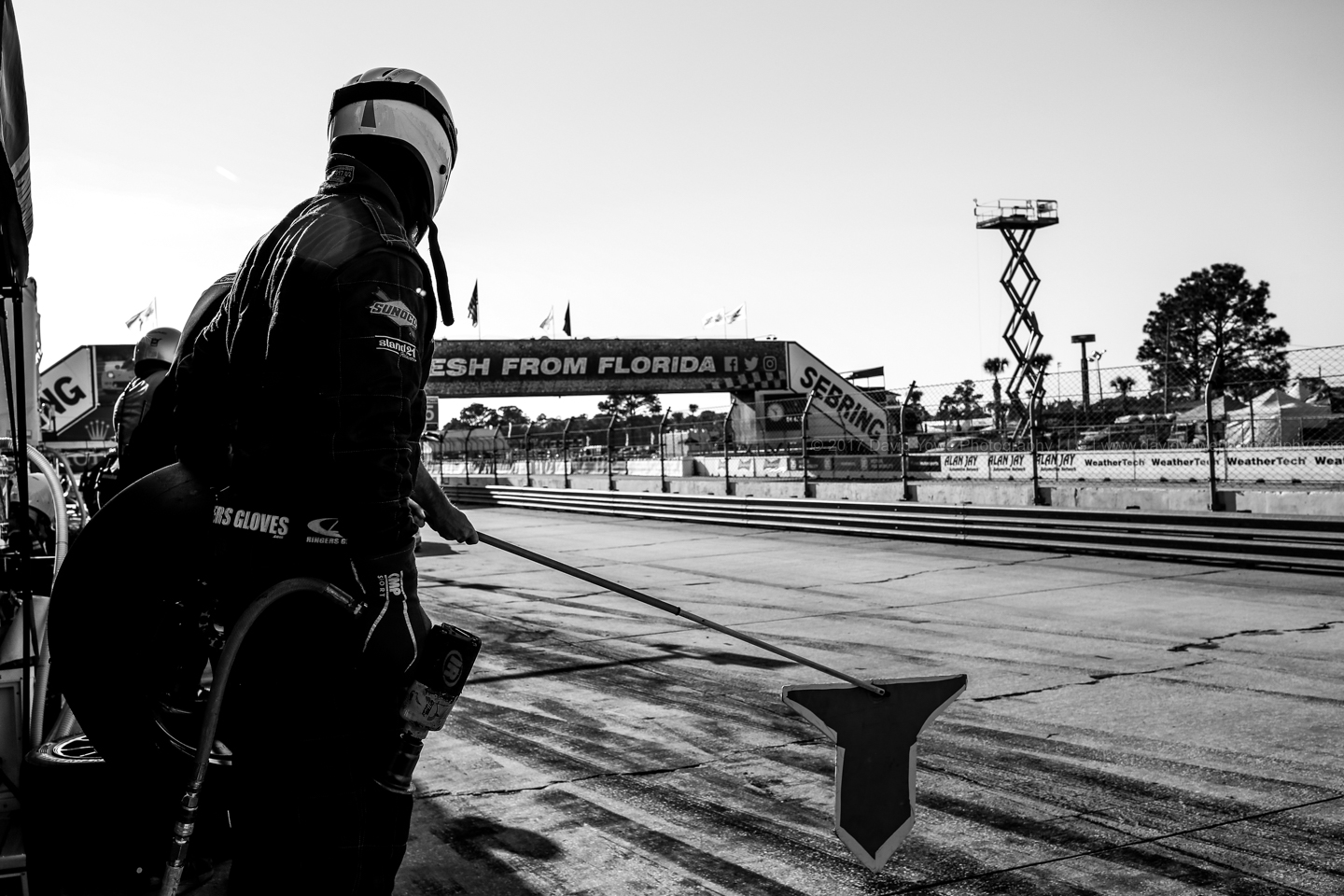 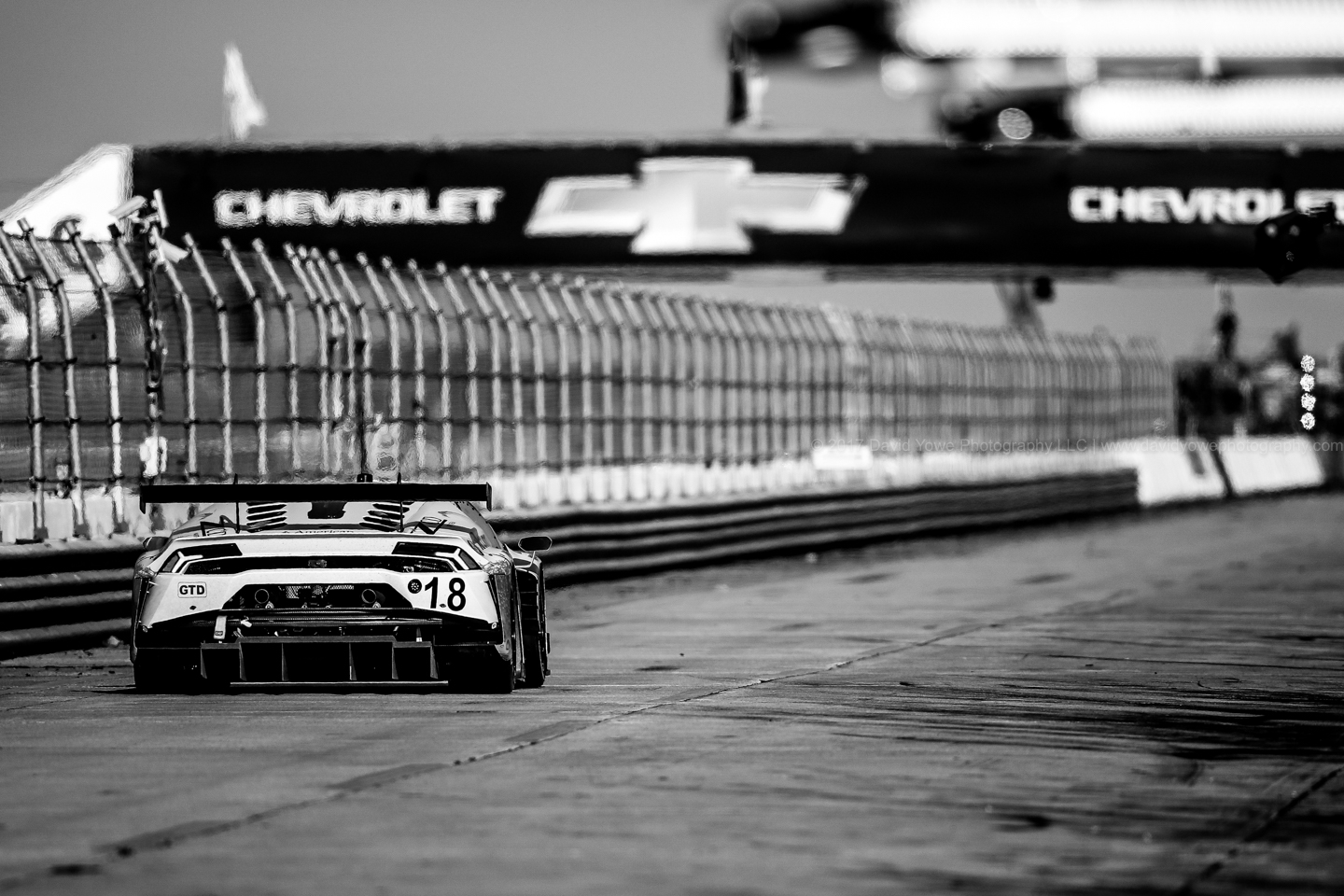 Here’s a series of shots of the #18 DAC Motorsports Lamborghini Huracan GT3 during a full service with driver change, new tires, and fuel being added to the car. Seeing these shots in black and white emphasized the dirt and grime which accumulates on a car during endurance racing.

Around 6.45 pm left the pits and walked down to the outside of Turn 1 to capture some iconic sunset front straight shots. At this time in the afternoon the setting sun casts a beautiful light yellow hue on the front straight which silhouettes the race cars. The #90 VisitFlorida Racing Multimatic/Riley with Marc Goossens, Renger Van Der Zande, or Rene Rast hits patches of dust as it speeds down the front straight and turns into the first corner.

A darker yellow hue was cast on the front straight as the sun got lower. Head-to-head with the #57 Stevenson Motorsports Audi R8 LMS GT3 and the #66 Ford Chip Ganassi Racing Ford GT. 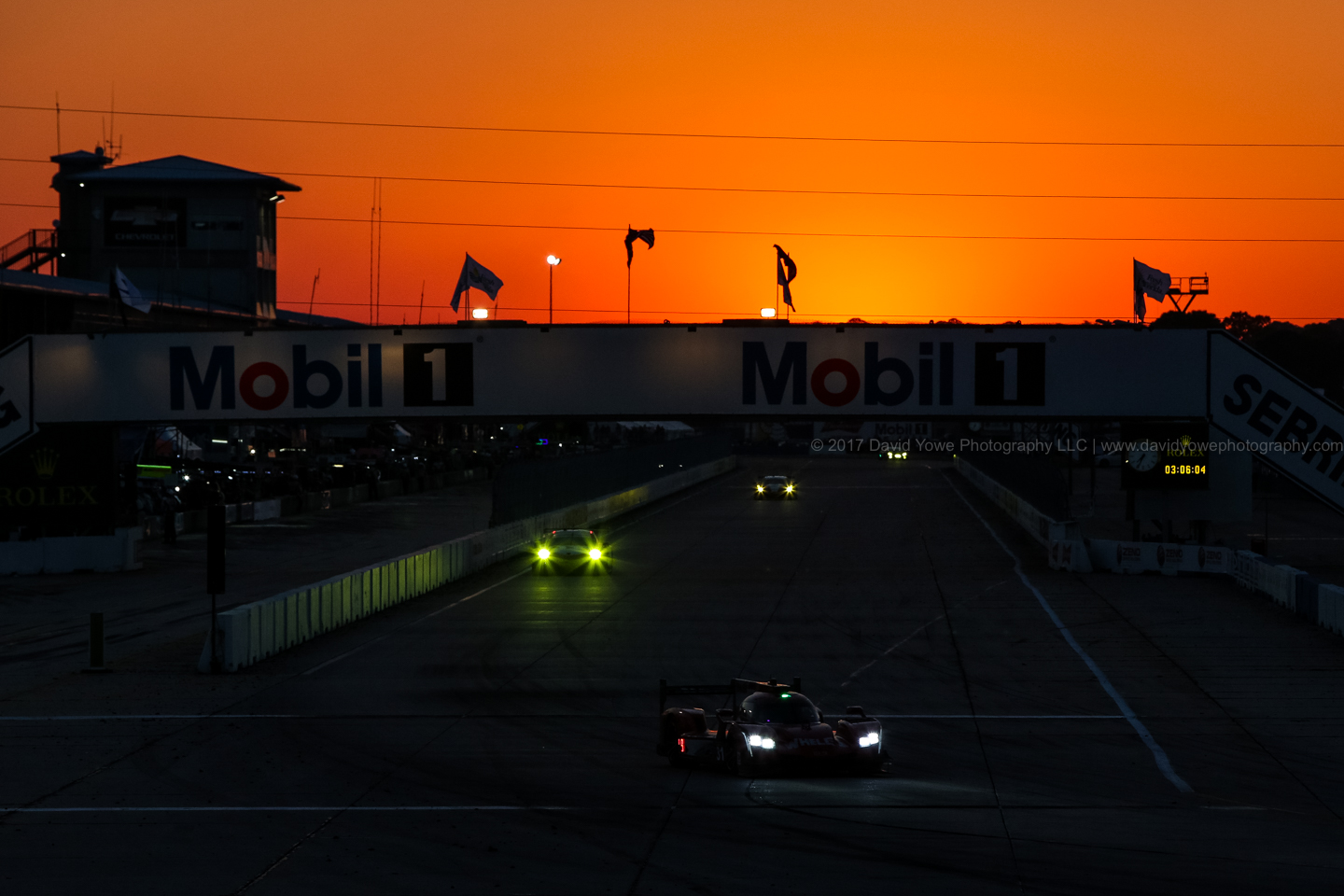 As the sun got lower in the sky, decided to get some shots of the cars from the top of the media tower that over looks the front straight. Here’s a couple of shots from sunset to dusk. 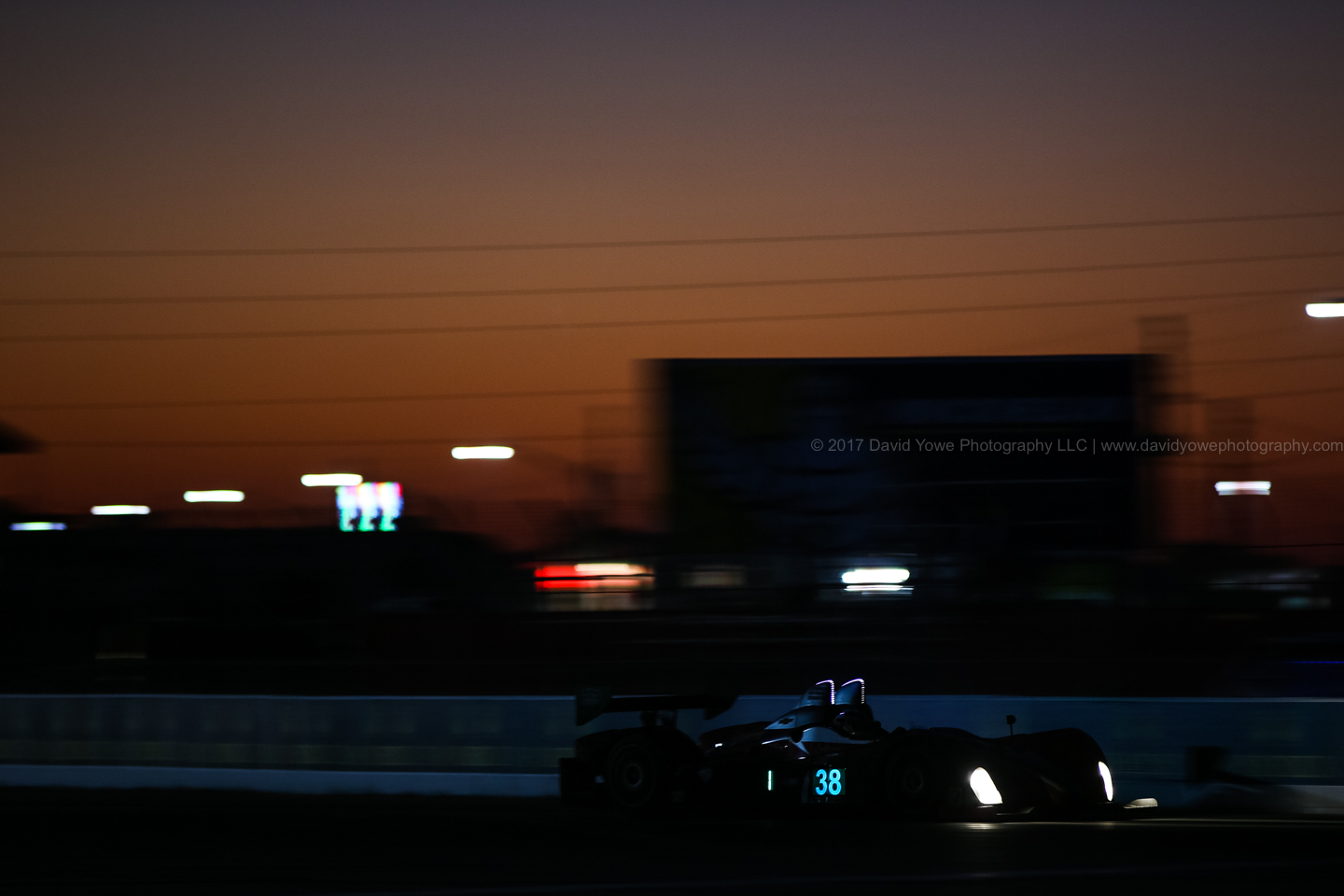 As night fell on the race, walked back towards the pits. On the way captured a pair of prototypes speeding down the front straight with their headlights reflecting off the safety barrier. 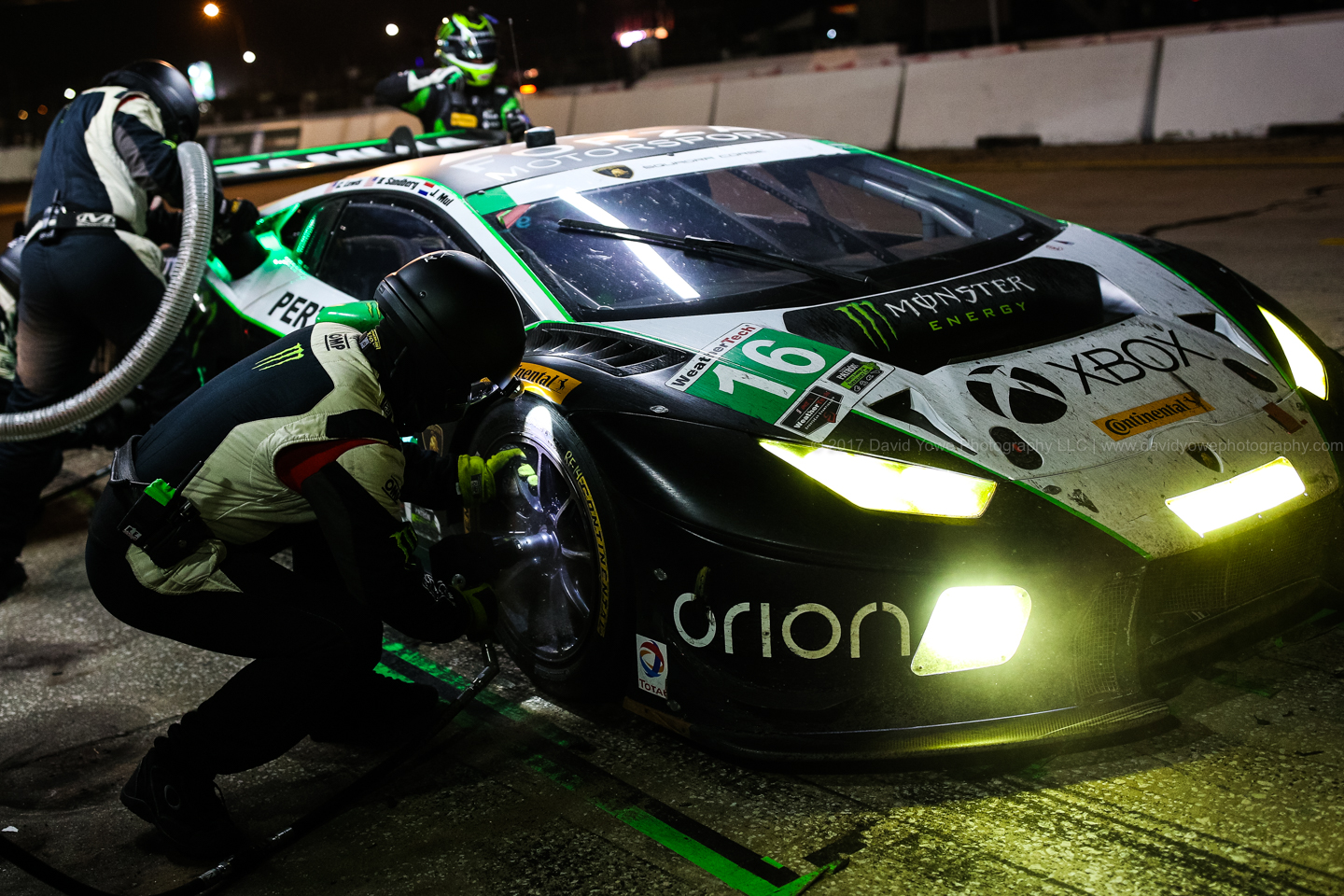 When I got to pit lane, I noticed the #16 Change Racing Lamborghini Huracan GT3 team were on the pit wall in preparation for their car, so waited to capture the pit box action. 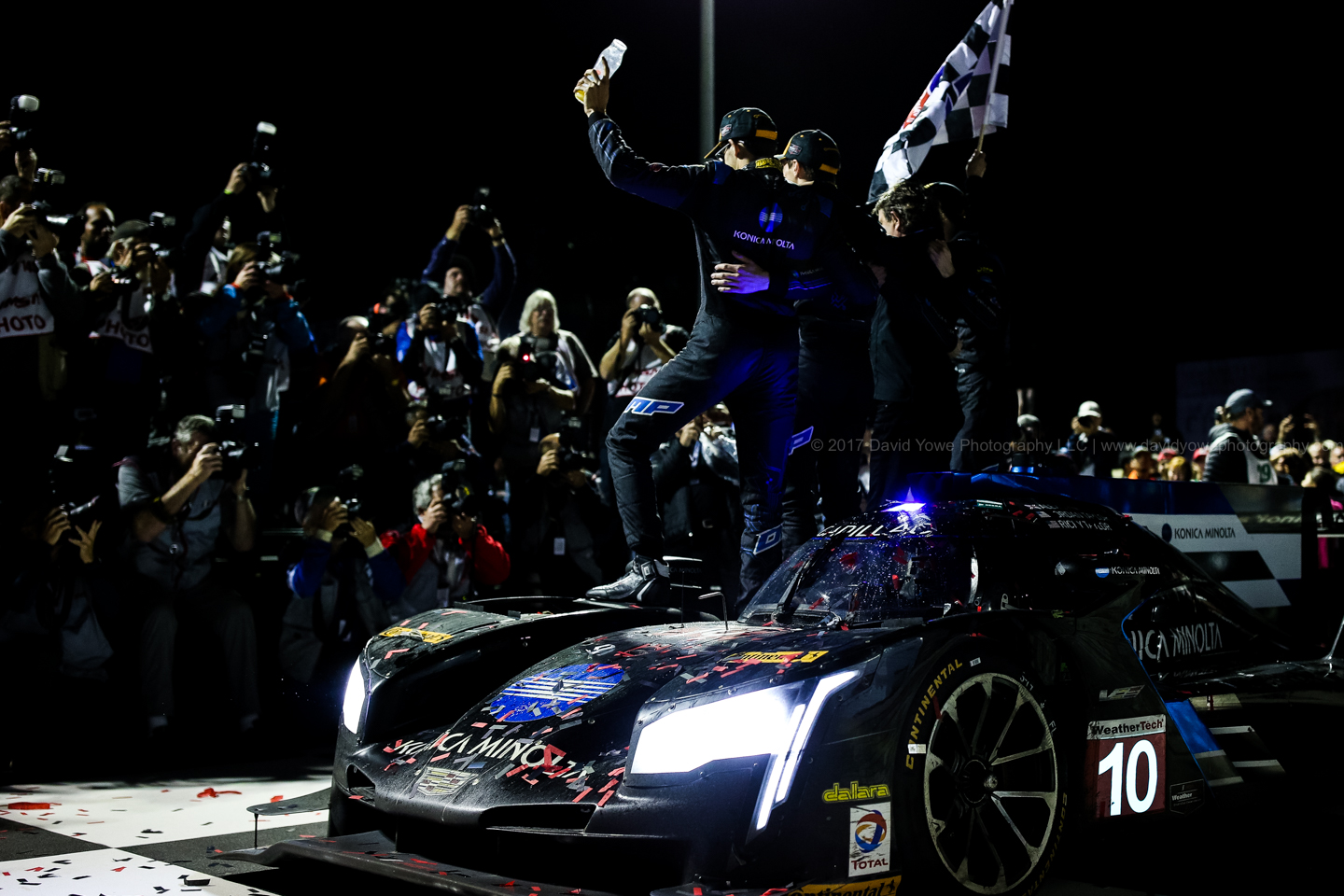 Outright winners of the 65th running of the 12 Hours of Sebring were Ricky Taylor, Jordan Taylor, and Alexander Lynn in the #10 Konica Minolta Cadillac DPi-V.R Cadillac DPi.

Fireworks for the winners (right to left) GTLM, P, PC, and GTD classes. Congratulations to these teams and all the teams that competed, as well as all who made it possible.

The podium celebrations ended around 11.20 pm, so headed back to the media trailer to edit and upload photos for my client. By the time I’d finished this, it was about 1.00 am Sunday morning and was running on adrenaline (and sugar from Coke and candy). Packed my bags and headed to the car for the 1 hour drive back to the hotel. I think it was about 2.30 am by the time I got to bed. It was a long day, but had a great time covering my first 12 Hours of Sebring from the “other side of the fence”. This event is an endurance for everybody who participates. Thanks to everyone for your help and for reading this blog.