Last Monday, Patriots Day was celebrated to commemorate the first battles of the American Revolutionary War that occurred in 1775. The Commemoration of the North Bridge Fight was one of the reenactments that occurred on that day with the “shot heard round the world”.  Hope you like the photos.

Over the Patriots Day long weekend was thinking how I would like to go to one of the many American Revolutionary War events that occur at this time of the year. On Monday morning decided to go to the Commemoration of the North Bridge Fight at the Old North Bridge. The Old North Bridge is situated in the Minute Man National Historic Park in Concord, and is about a 30 minute drive from Boston.Arrived at the Old North Bridge around 7 am and parked at the Visitor Center off Liberty Street. Its important that you get here before 8.30 am, since the Concord center is closed to traffic after this time.  For this photo shoot brought a Canon 5D Mark III attached to a 70-200mm f/2.8L IS II and 1.4x extender II for long shots and a Canon 5D Mark III with a 35mm f/1.4L IS II for scene setting shots.

Walked from the car park to the front of the Visiter Center and past a garden area that seemed to glow in the early morning light. 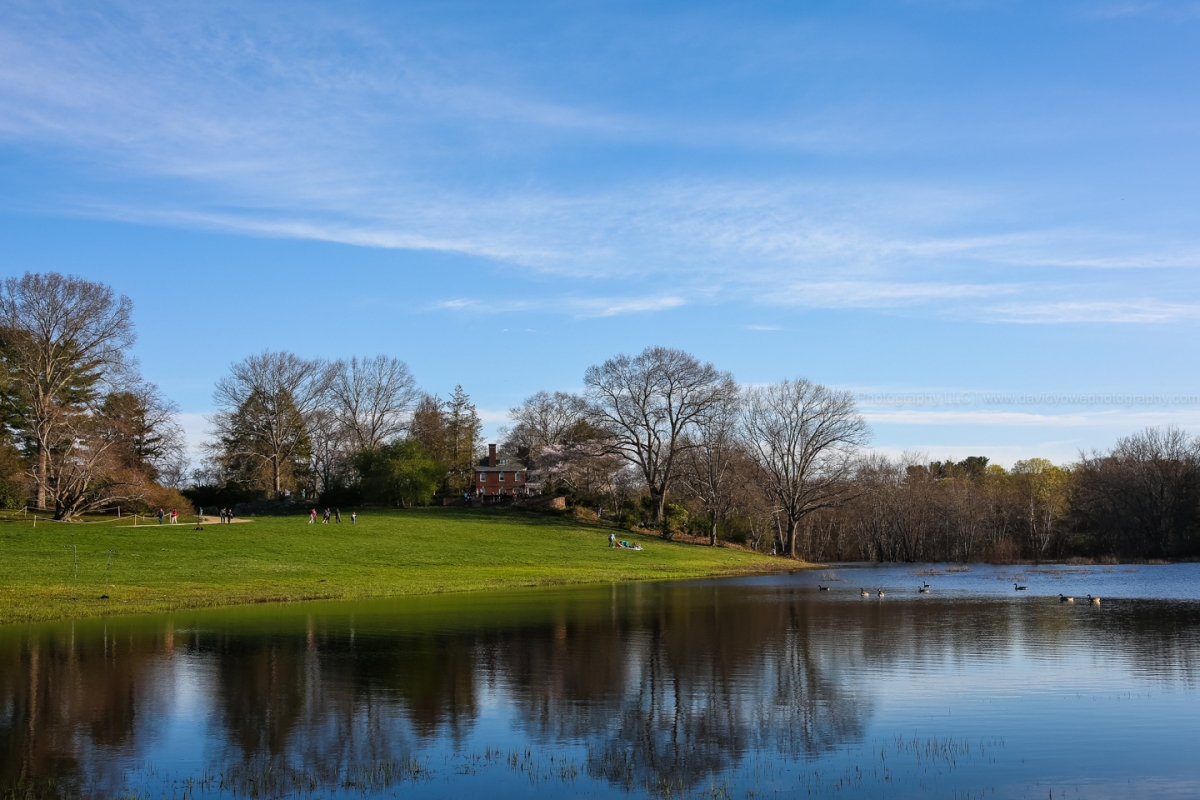 Continued walking down the road to the Minute Man Statue on the west side of the Old North Bridge (Liberty Street side). Here’s a view looking back up the hill towards the Visitor Center with the Concord River in the foreground. Sitting on the grassed hill in front of the Visitor Center is a good location to get a wider view of the reenactment that occurs near the Minute Man Statue and on the Old North Bridge. 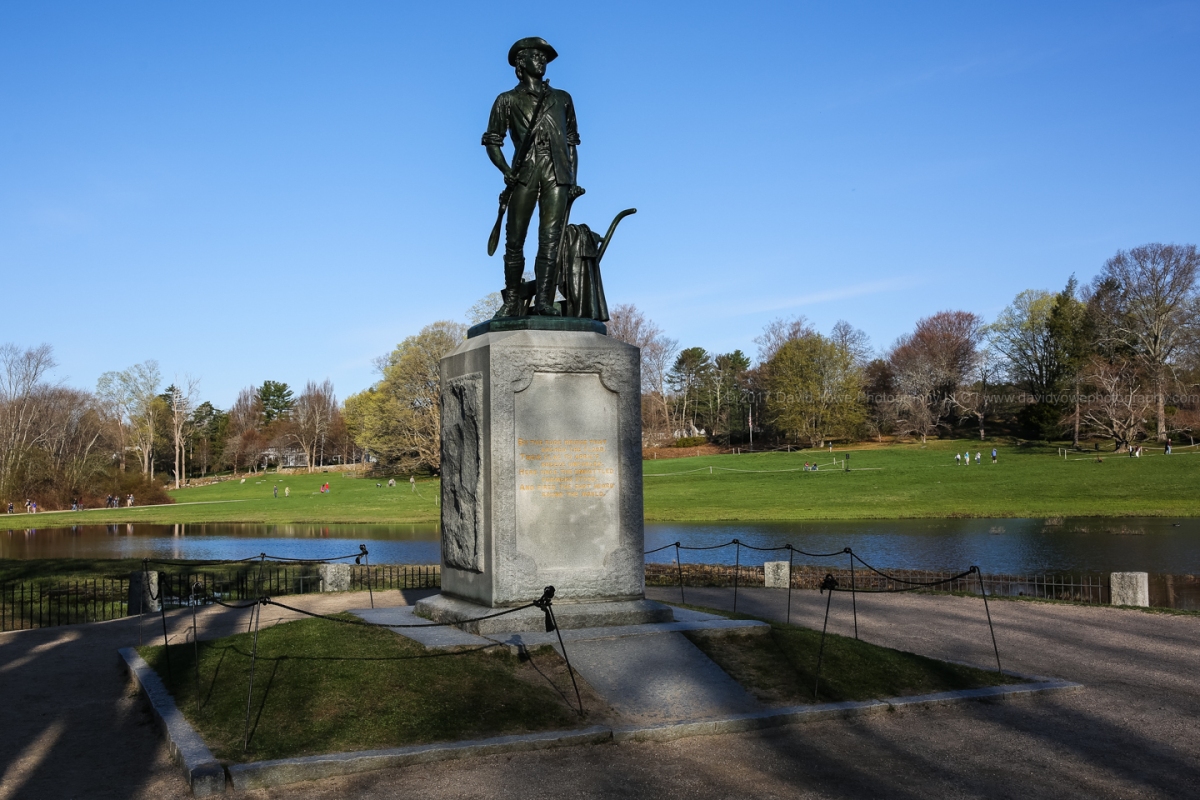 Near the Old North Bridge is a statue that represents the Minute Man (the farmer, turned defender) and the pedestal contains an inscription which describes “the shot heard round the world”. 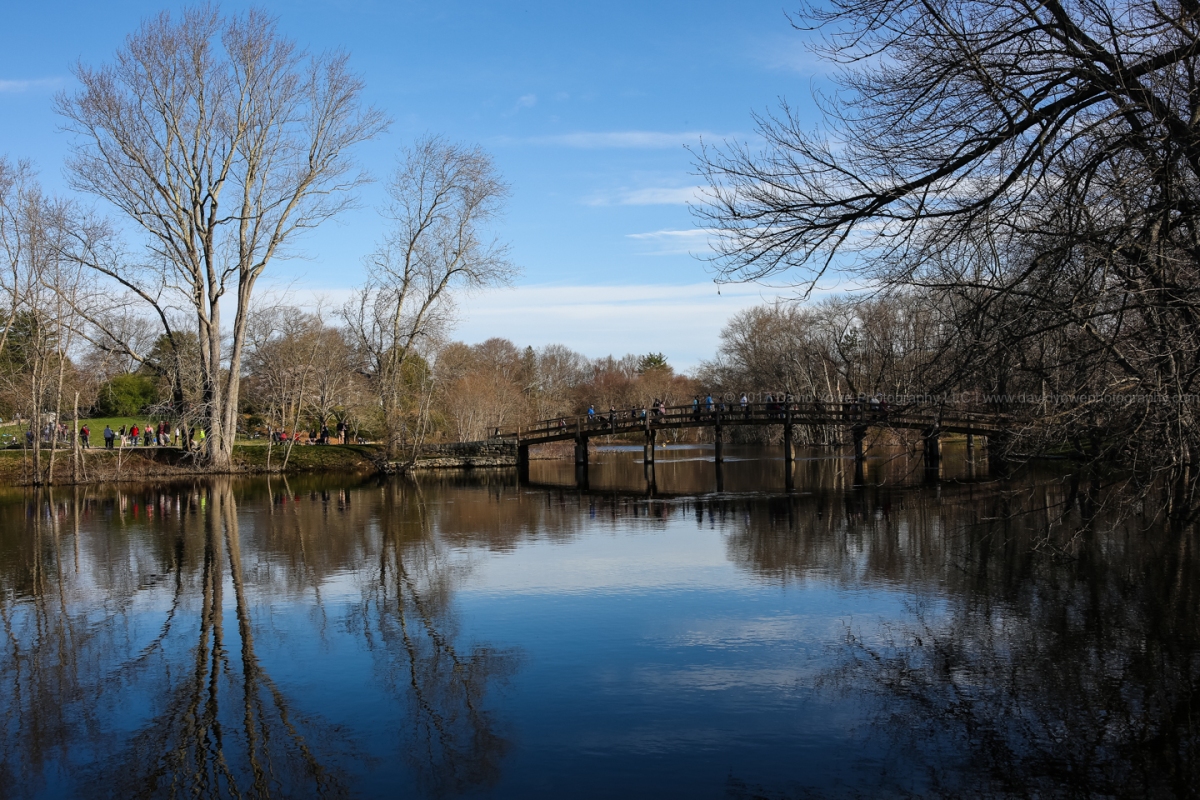 Crossed the bridge and started to look for vantage points to cover the reenactment. Their were a lot off roped off areas which restricted spectators to either the hill in front of the Visitor Center or to the east side front of the bridge (right-side in the photo above). First went to the front side of the bridge (side facing the Visitor Center) since you could get close to the event, however, it wasn’t a good place for photography due to the many trees which obstructed the view. So continued looking around and noticed a small jetty next to The Old Manse House on the rear side of the bridge. The photo above gives you an idea of the view you can get from this location. From this location used the 35mm lens for scene setting photos (as above) and the 70-200mm lens with 1.4x extender at 300mm for closer shots. In retrospect, should have brought the 500mm lens.

This was also a good location for people in canoes and kayaks to watch the event.

As the morning progressed more spectators lined the road leading to the east side of the Old North Bridge, since this would be where the British militia would be entering.

Around 8:00 to 8:45 am until about 9:30 am, the Battle at the Old North Bridge from 1775 is depicted with reenactors from Acton, other local companies, park rangers, and volunteers. Firstly, the British cross the bridge around 8.30 am, which was followed by back-and-forth crossings to the east side. 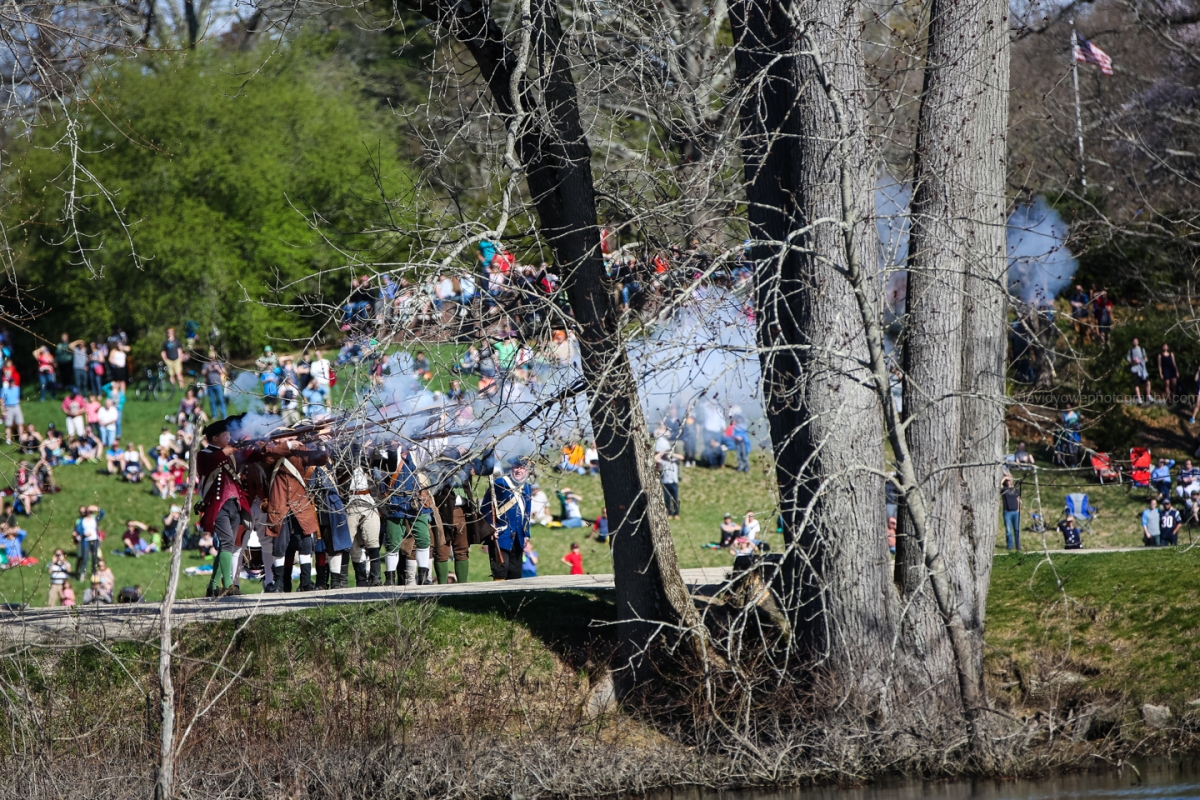 Around 8.55 am their are exchanges of musket fire between the British on the east side and the Provincial forces (above) on the west side of the bridge. Each side fires about two volleys of muskets. 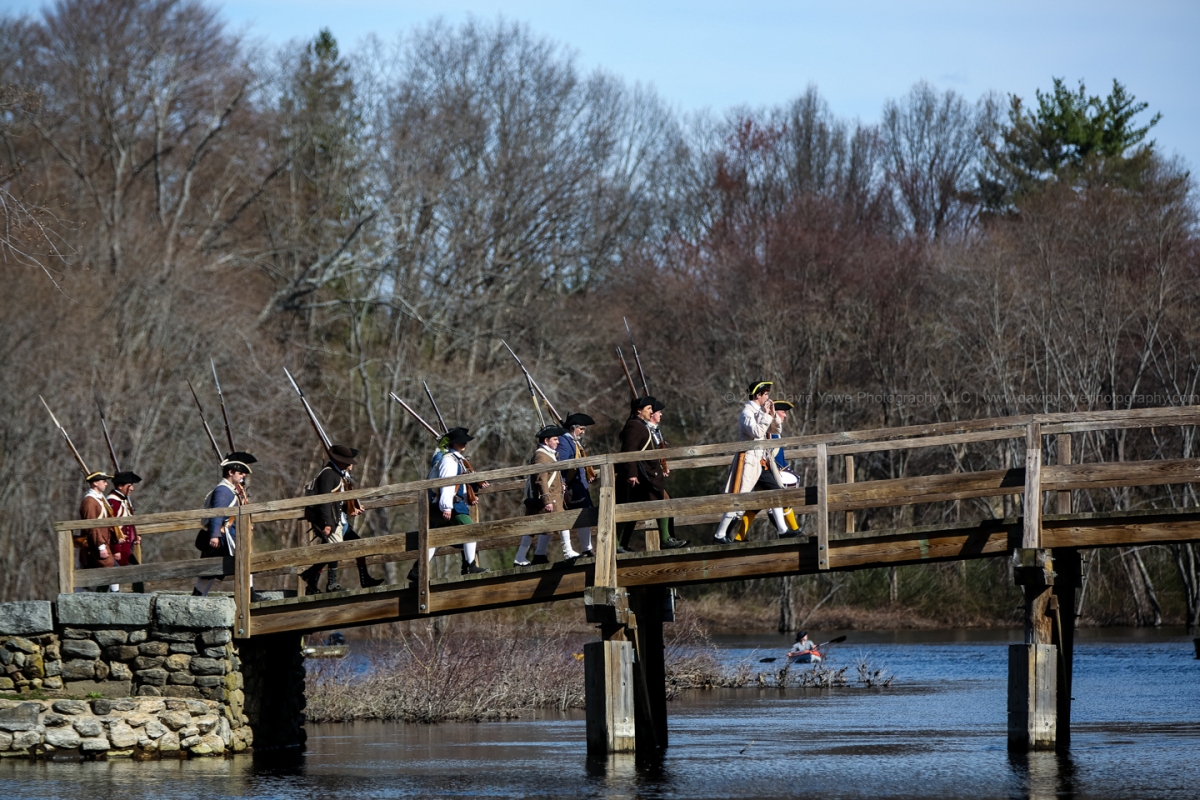 At 9.00 am the Provincial Forces crossed the bridge.

The British and Provincial Forces lined up on either side of the bridge and fired off two rounds of muskets around 9.10 am.

After the musket firings, the British and Provincial Forces marched off the bridge to the east side and walked up the path lined with hundreds of spectators to Monument Street for the parade to Concord Center. 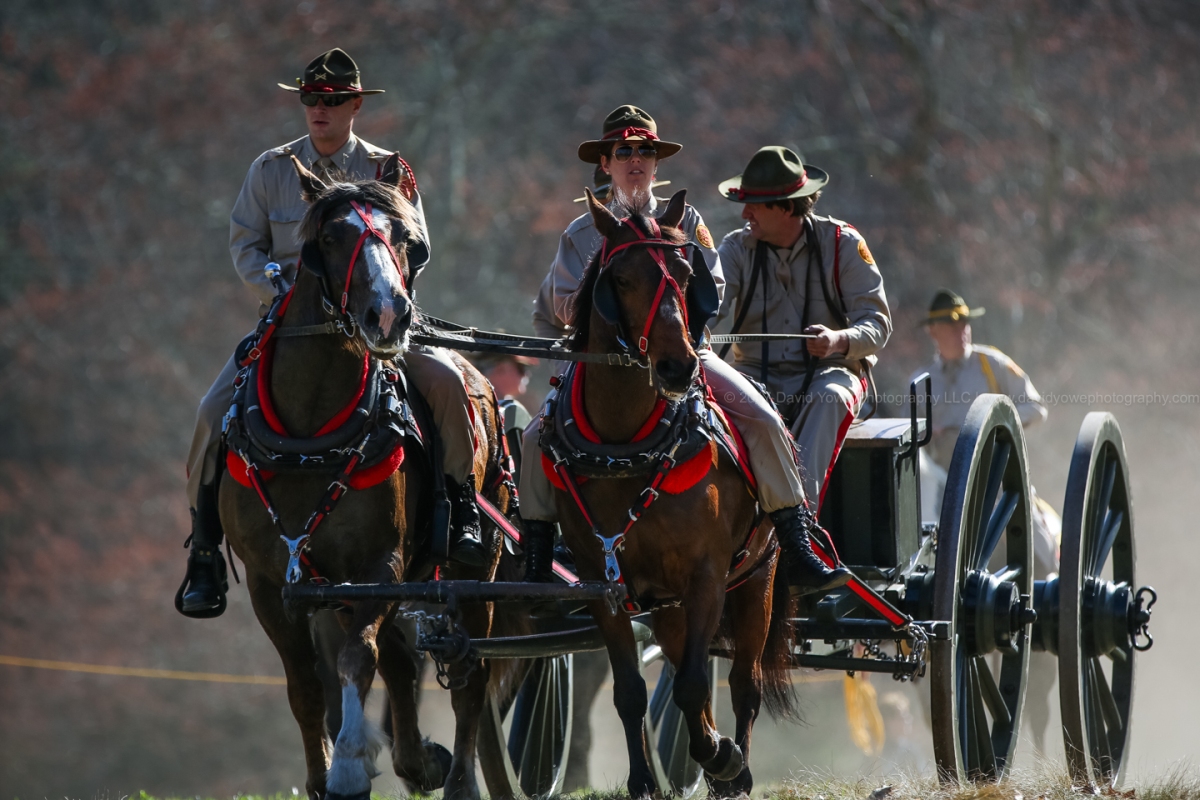 After the American Revolutionary War reenactment was finished, I walked from The Old Manse House to a clearing on the east side of the bridge. As I was walking up the hill, I noticed horses pulling brass cannons coming towards me. I couldn’t believe my eyes, so quickly fired off the shutter on my camera with the 70-200mm lens. 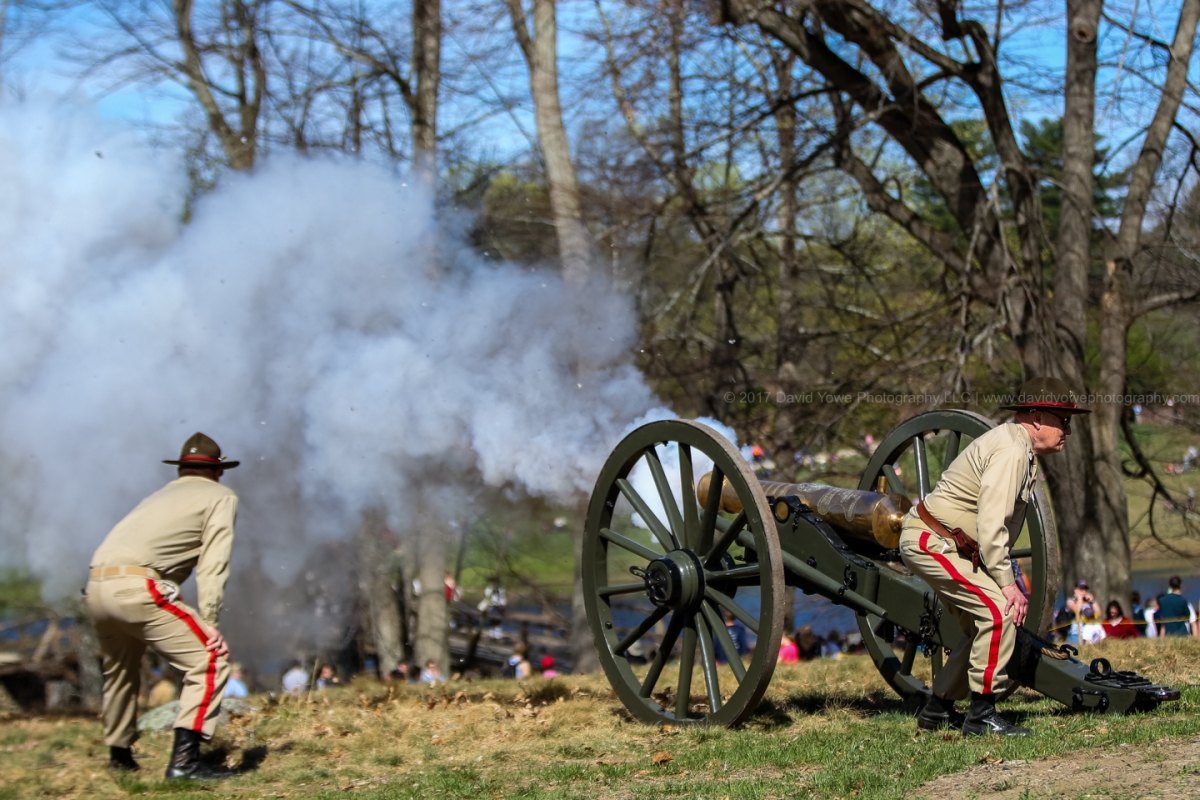 Here’s a couple of shots to show you what its like to witness the firing of these impressive brass cannons. 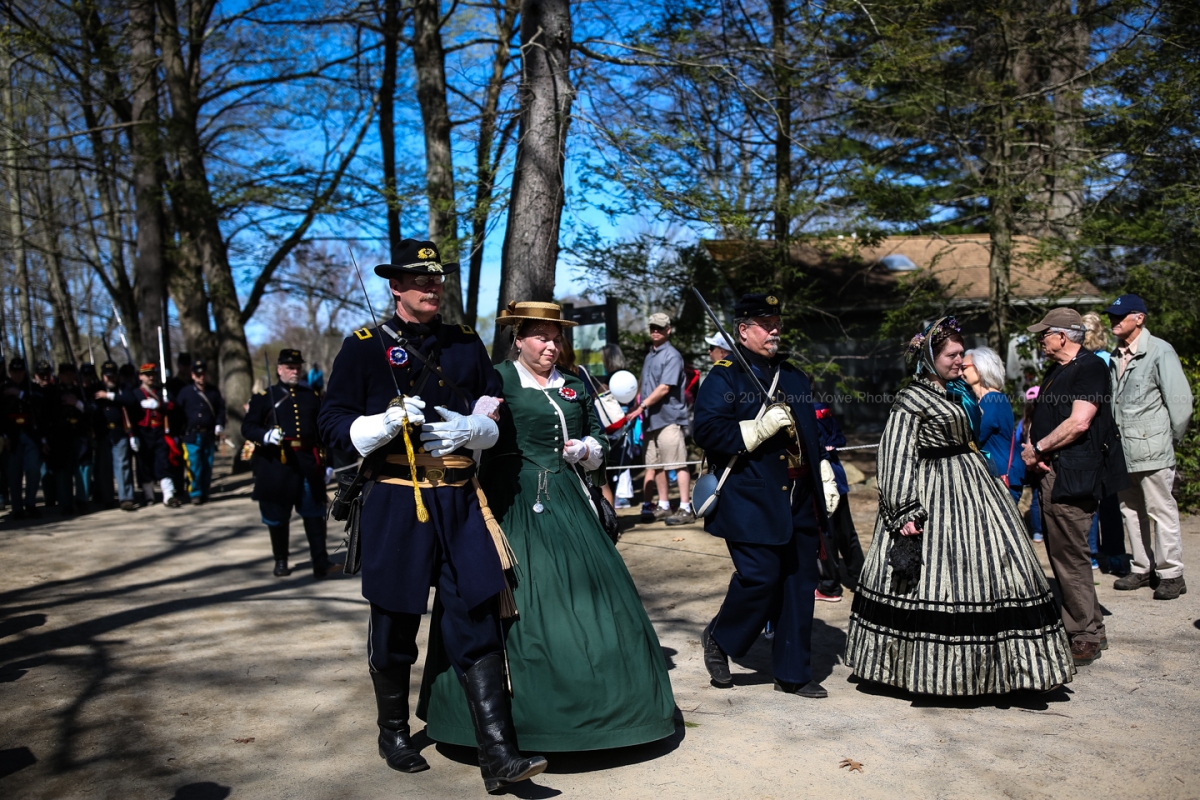 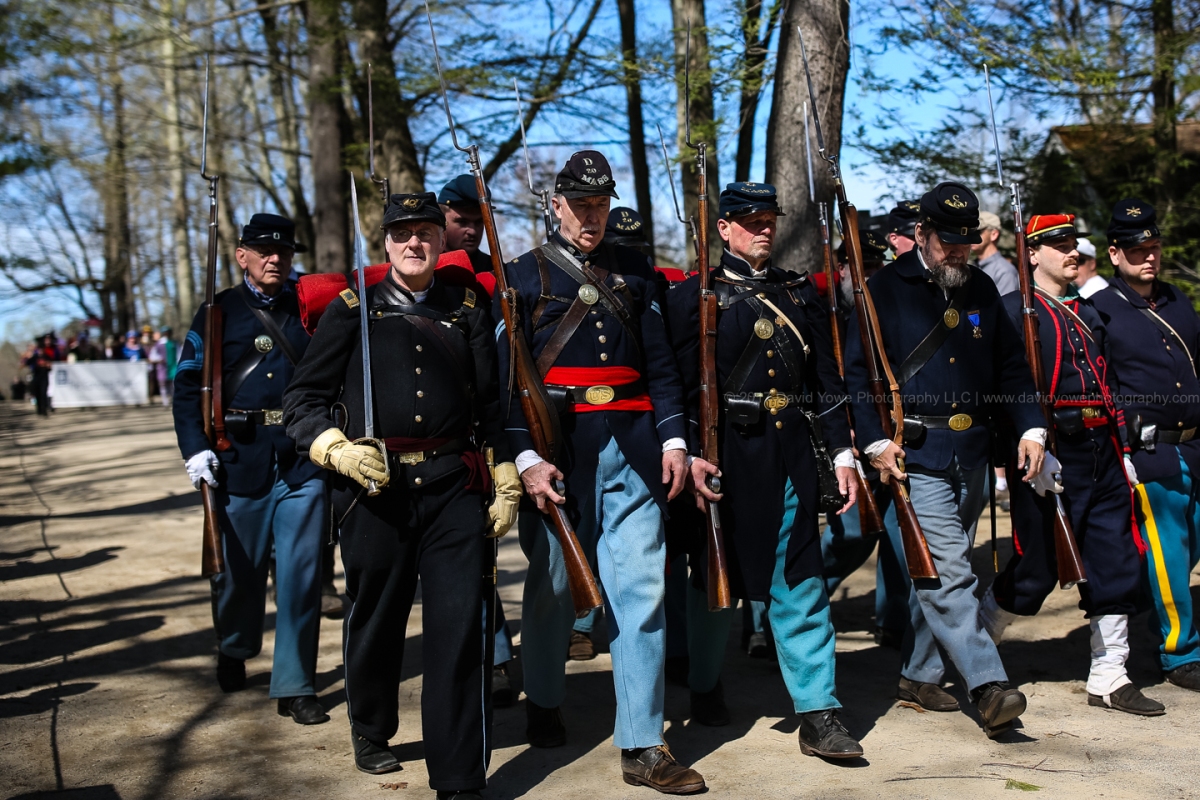 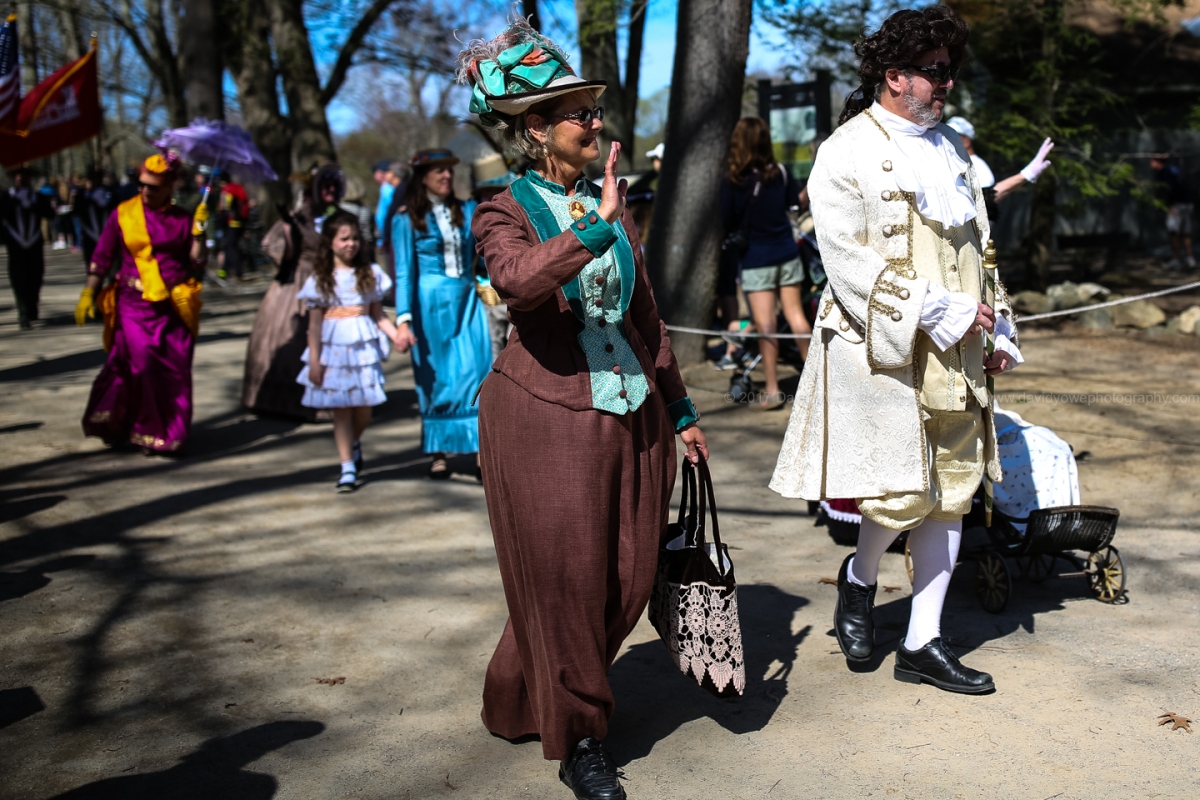 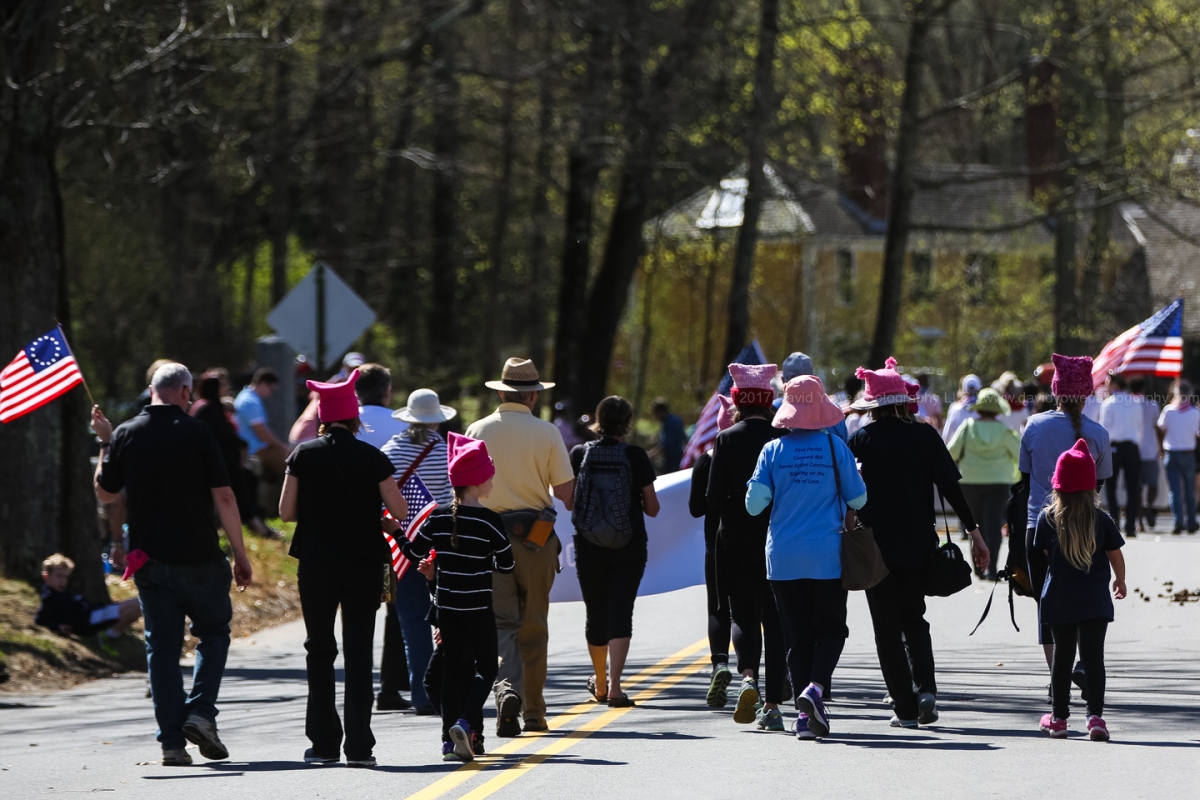 At about 9.50 am the artillery demonstration ended, so walked over to the path leading from the Old North Bridge to Monument Road to see the last part of the parade heading to Concord Center.

Around 10.25 am crossed the Old North Bridge to the west side of the Concord River.

Near the Minute Man Statue was a gentleman reciting the Henry Wadsworth poem “Paul Revere’s Ride”. Was great to sit hear and listen to this poem which commemorates the actions of the American Patriot Paul Revere on April 18, 1775.

Continued my way past a “very full “Concord River.

Here’s a look back towards the Minute Man Statue (lower right) and the Old North Bridge (near lower center).

Took a quick look inside the Visitor Center, then headed to the car. Had a great morning experiencing the Commemoration of the North Bridge Fight. Many thanks to everyone who made this event possible, which was appreciated by all who attended.