This weekend is the season finale at Sonoma which will decide this years IndyCar Champion. Thought it would be a good time to look back at the penultimate race of the season at Watkins Glen International. Going into the IndyCar Grand Prix were eight drivers who had a mathematical chance of winning the championship. Of these drivers, Alexander Rossi in the #98 Andretti Herta Autosport w/Curb-Agajanian, would dominate the weekend with pole position and winning the race. This blog is about three days at the IndyCar Grand Prix. Hope you like the photos.

Watkins Glen International is about 400 miles west of Boston and is located in upstate New York near the beautiful Finger Lakes District. The IndyCars use the so-called “long course” which is 3.4 miles long, consists of 11 turns, and includes The Boot. What I really like about this track are the major elevation changes that occur at The Esses and The Boot, and the variety of straights and corners, which run through tree-lined or grandstand-lined backgrounds. All of this adds to the variety of photos you can get at this track.

Arrived at the track around 7.00 am so I could pick up my media credentials and parking pass, then headed over to Gate 2 and parked at Media 2 at the outside of the track. Was great that the track ran golf carts from the Media 2 parking to the Media Center. Watkins Glen International have a very impressive media center, with modern facilities, and very friendly and helpful staff. Also really appreciated the hot lunches they provided each day. After the 8.00 am photo meeting started to get my photography gear together and think about where to go for the first IndyCar practice session.

For practice 1 walked across the front straight pedestrian bridge, then down to the Seneca Grandstand which overlooks Turn 1 at the end of the front straight. Decided to go to this grandstand today, since it would probably be full with spectators on race day. Went to near the top of the grandstand and on its right-hand side so could shoot over the high catch fencing. Its a great location to watch the teams prepare their cars in the pits. 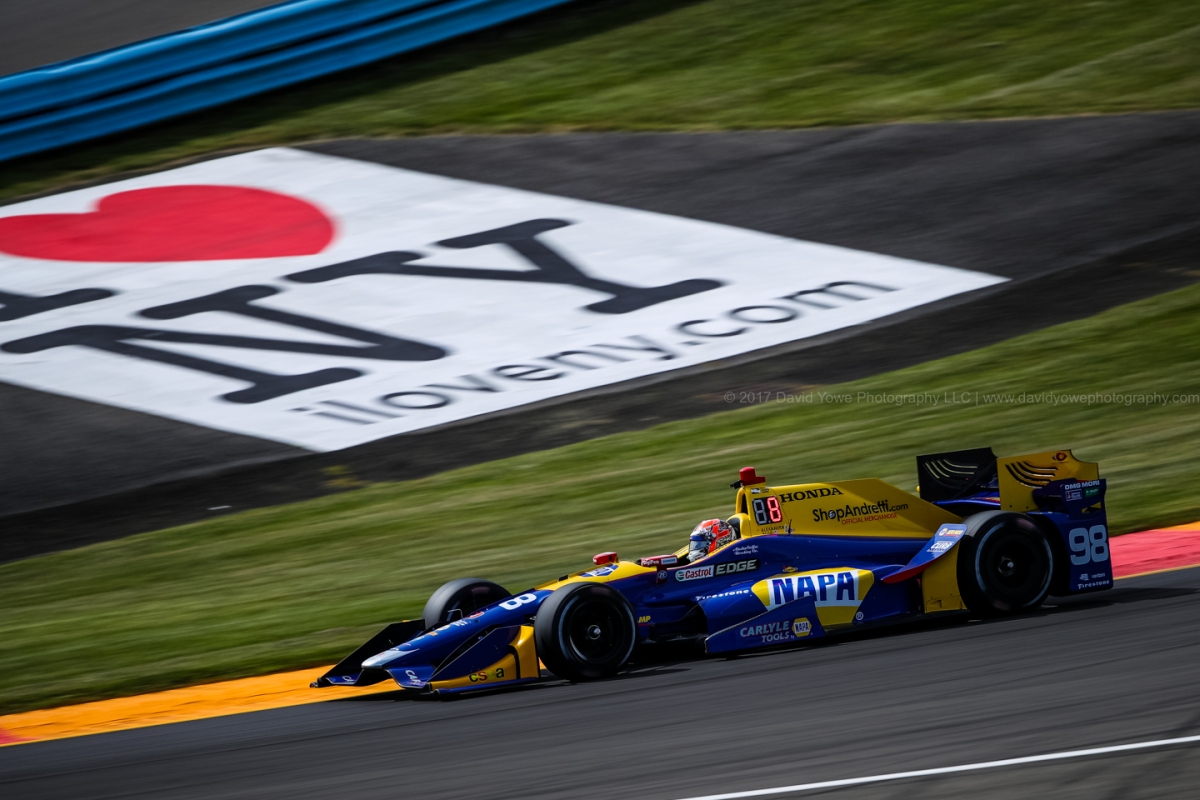 Alexander Rossi in the #95 Andretti Herta Autosport w/ Curb-Agajanian passing the “I Love NY” sign painted on the side of the track.

Left the grandstand and walked down to the outside of Turn 1. Noticed an opportunity to get front shots of the cars coming down the front straight by shooting through the catch fencing. Liked how the front straight catch fencing and the Verizon sign framed Simon Pagenaud in the #1 Team Penske. The session ended around 11.00 am so went back to the Media Center to edit and upload the photos, then grabbed some lunch.

Just before 1.00 pm, headed over to the IndyCar Fan Village since the drivers would be their to answer the fans questions and sign autographs. Its great that the IndyCar drivers spend the time to interact with the race fans, since it really helps IndyCar to connect with there followers. Was really cool that James Hinchcliffe accepted a fans request to dance on the stage.

Helmets were lined up on a table behind the IndyCar Fan Village tent, ready for the drivers to sign.

Was great to see long lines of race fans waiting for their turn to talk to the drivers and get their autographs.

Will Power, driver of the #12 Team Penske. 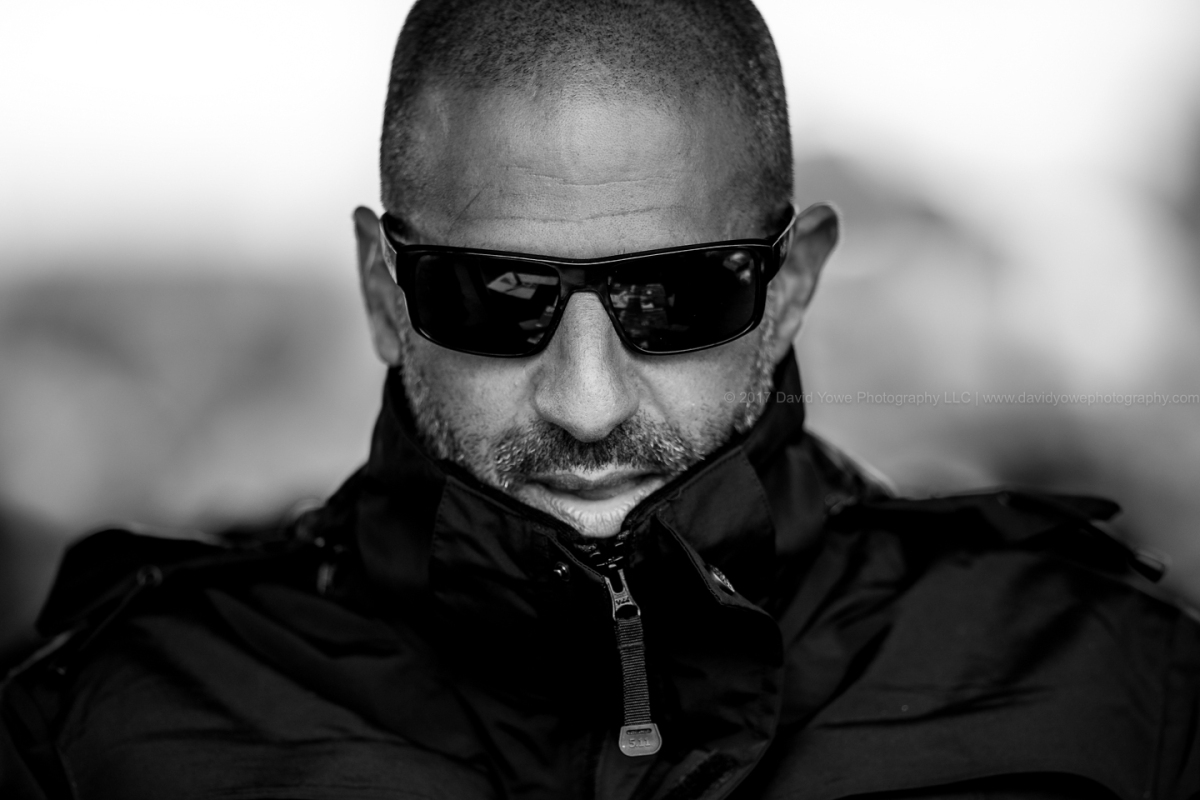 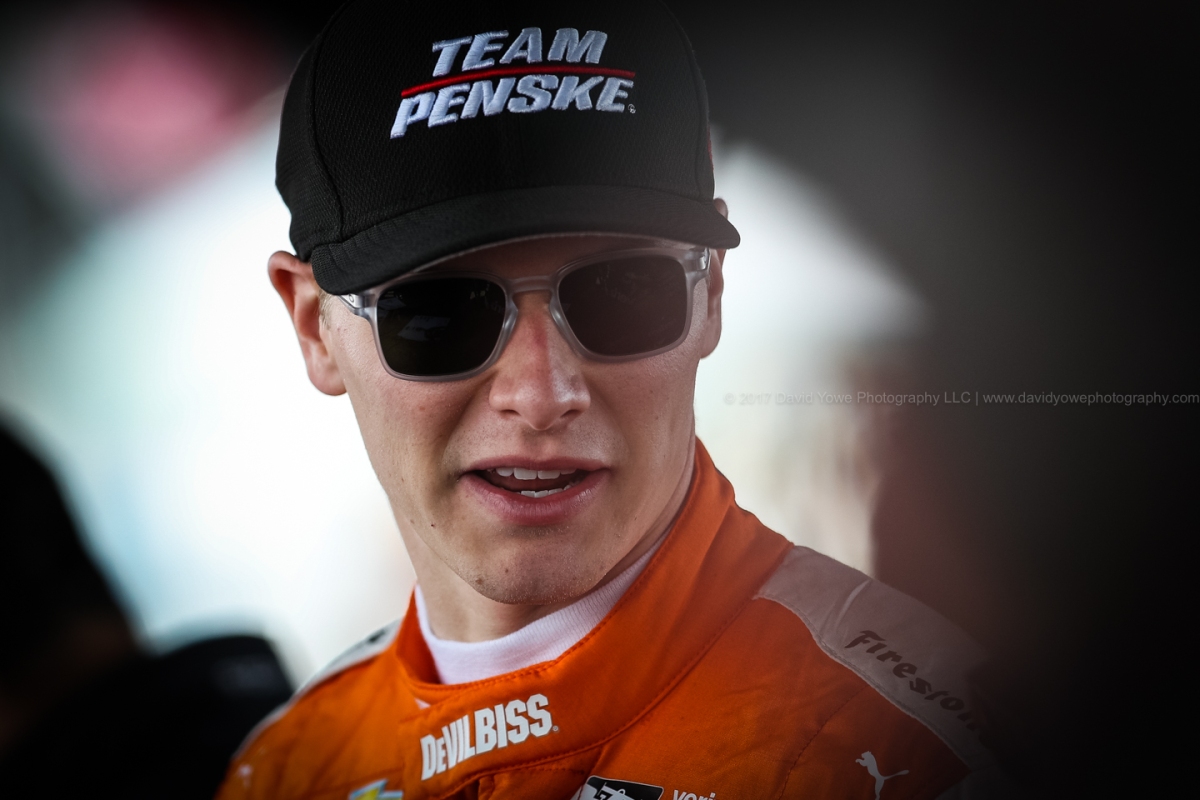 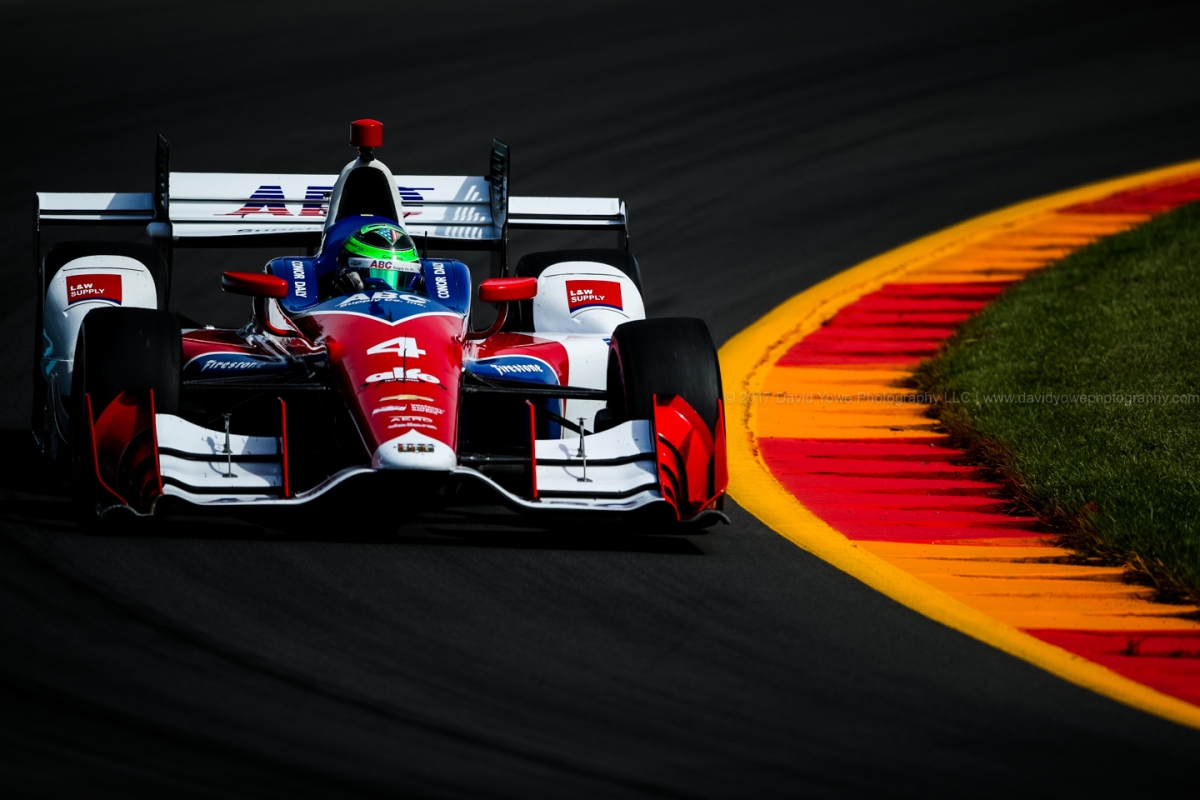 For the mid-afternoon practice session headed over to Turn 7 on drivers right. This part of the track is known as the Chute due to the steep descent into The Boot. At this time of day the sun casts beautiful light on this part of the track and really makes the colors “pop”, as shown in the above shot of Conor Daly in the #4 A.J. Foyt Enterprises. 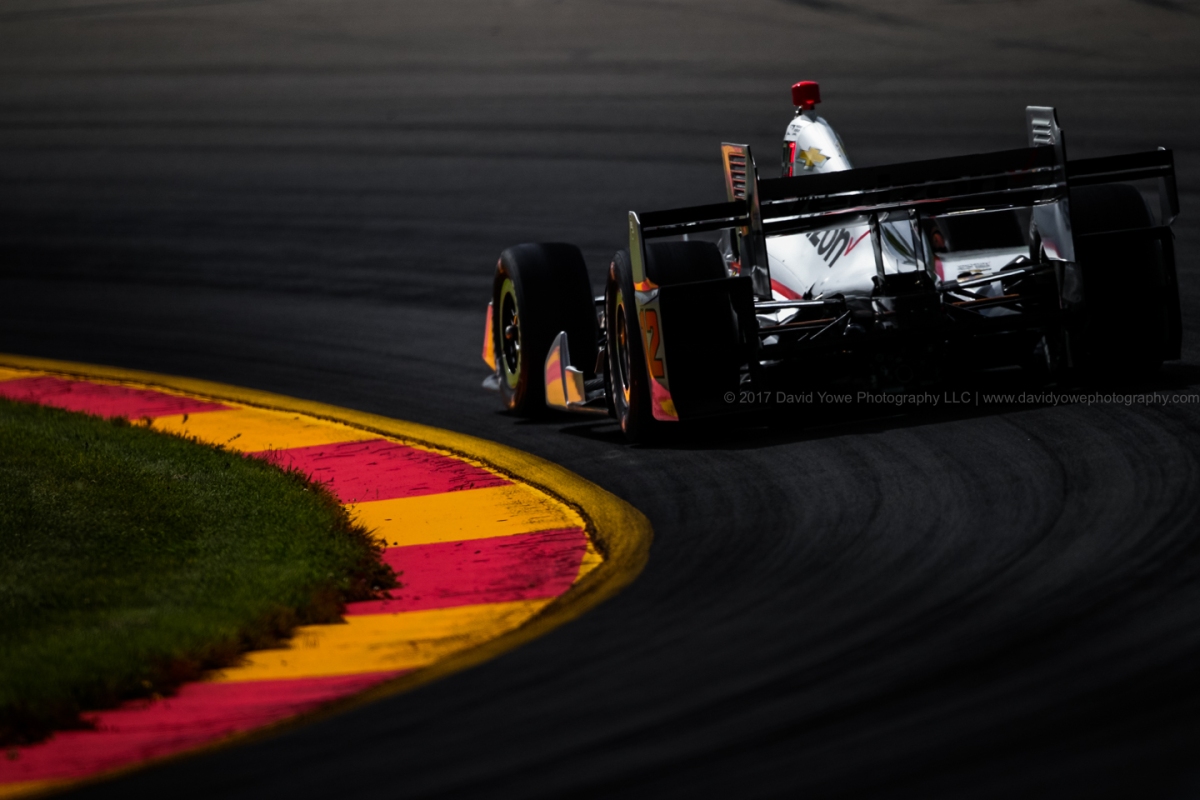 The afternoon light also makes the colors “pop” when getting rear shots of the cars exiting this corner. Will Power in the #12 Team Penske.

Walked down the Chute into the top of The Boot and looked back, for a wide shot of Turn 7. Here’s another shot of Will Power speeding out of this corner in the #12 Team Penske. 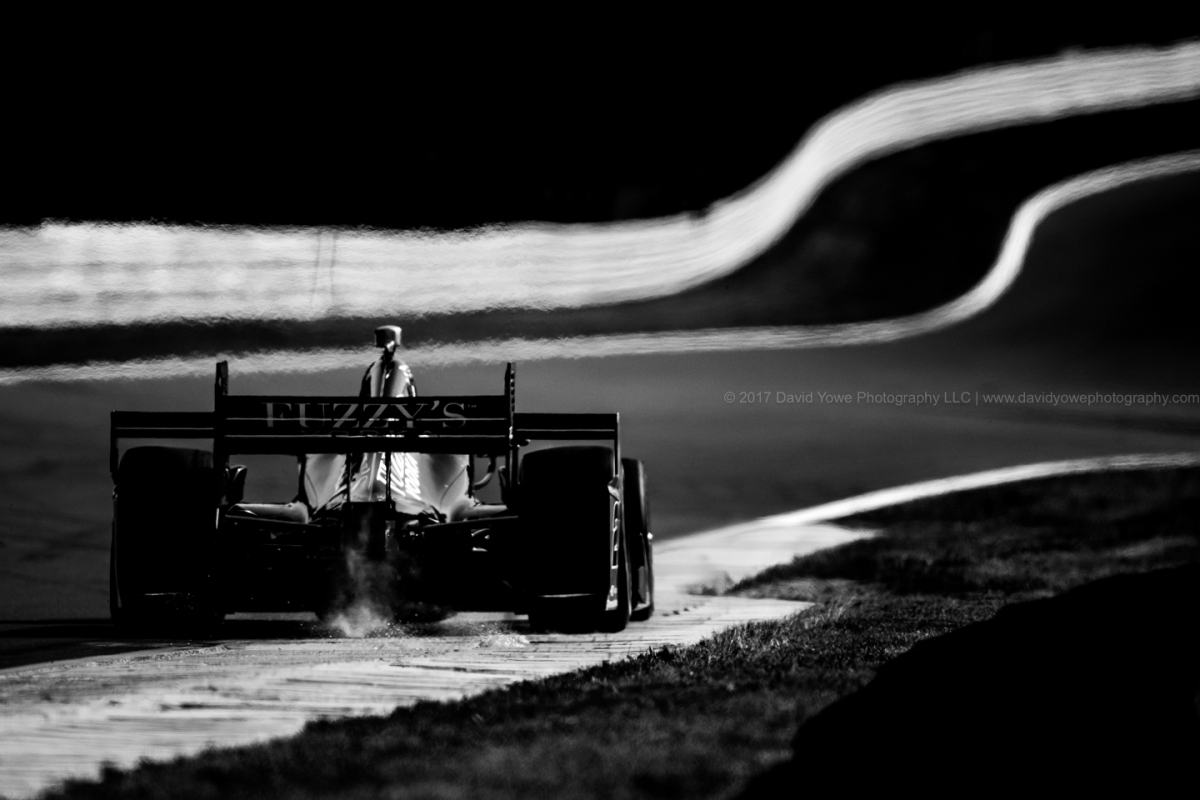 As I continued down into the top of The Boot, noticed an opening in the safety fencing that gave you a great view of the IndyCars speeding into the Turn 7 to 8 straight. Really liked how the crash barriers formed “curry white lines” and the puff of dust and sparks from the rear of the car as it hit the kerbing.

After the second practice session finished around 3.50 pm, headed back to the Media Center to edit and upload the photos, then left the track for an early dinner.

Arrived at the track in time for the 8.00 am photo meeting at the Media Center. For the 10.30 am morning practice session walked over to the outside of Turn 10 (drivers right) for shots of the cars entering and exiting this corner. Charlie Kimball in the #83 Chip Ganassi Racing.

Points leader Josef Newgarden in the #2 Team Penske. The bright orange livery really stood out at this corner. 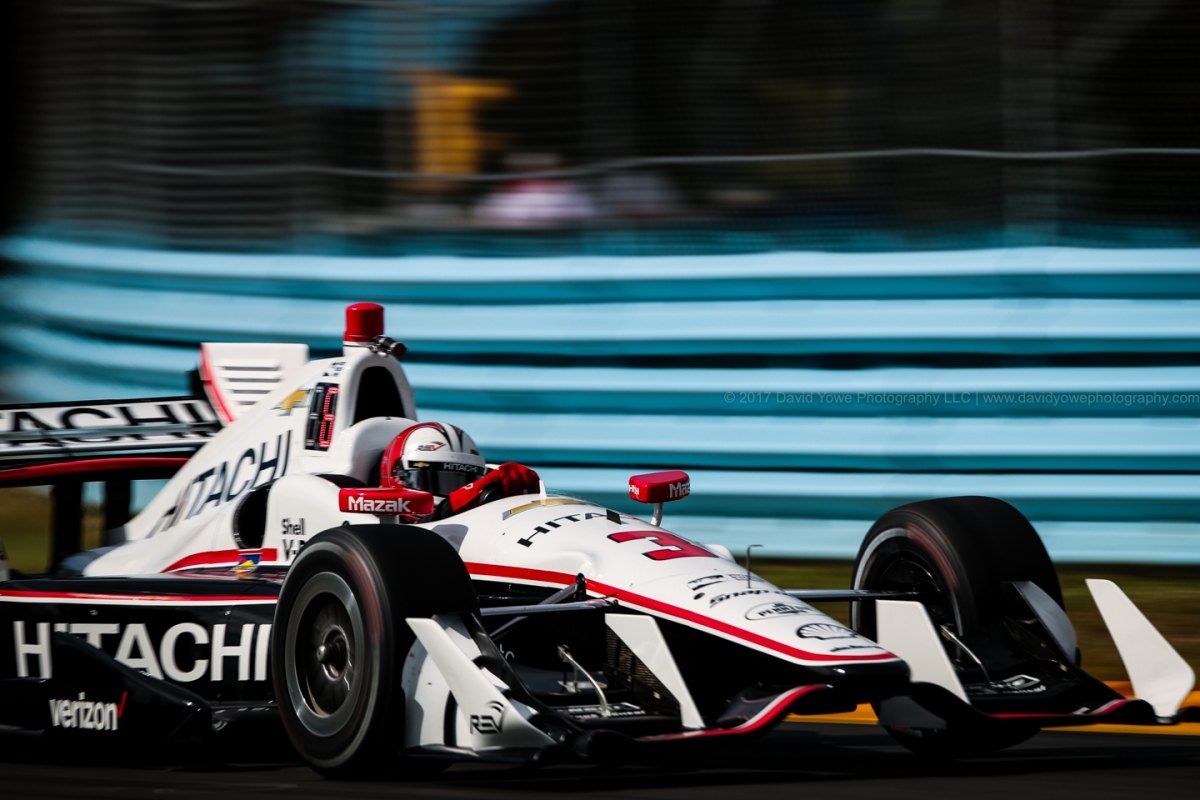 Helio Castroneves in the #3 Team Penske.

Walked to my left for shots of the cars speeding into Turn 10. Takuma Sato in the #26 Andretti Autosport. 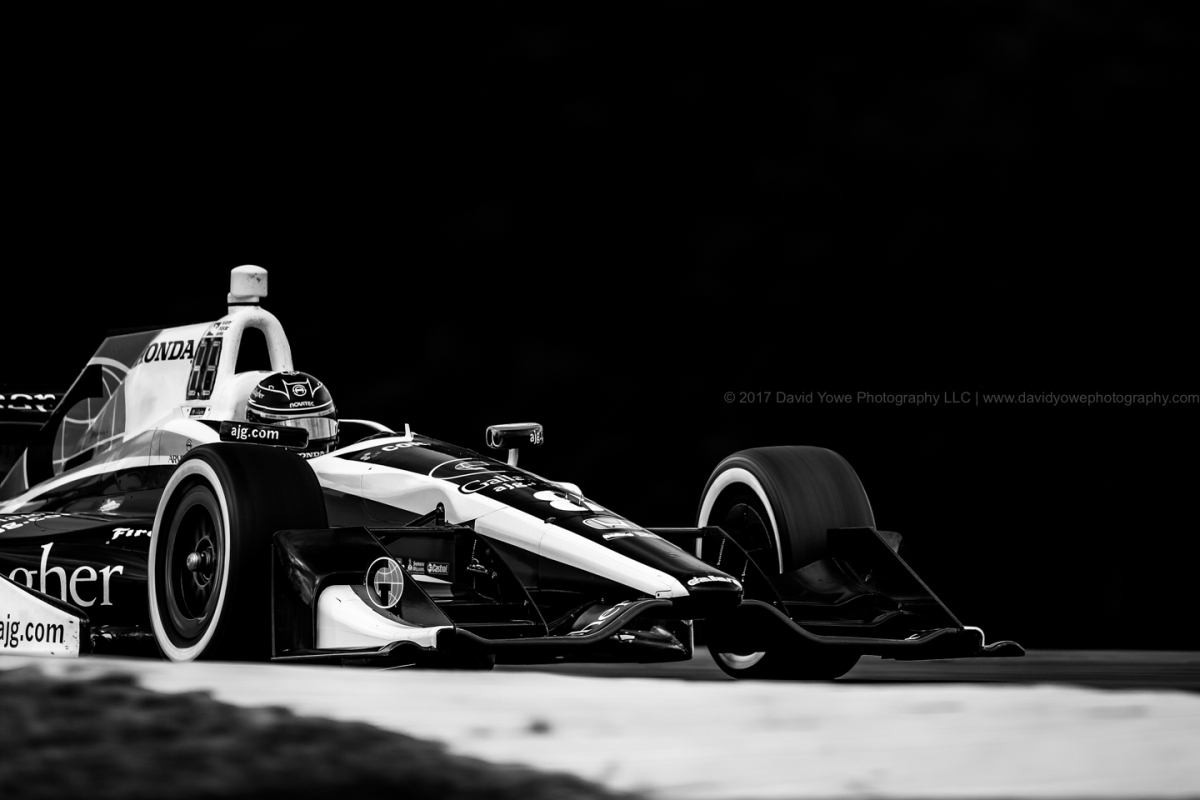 Qualifying started at 3.00 pm, so went over to the Bus Stop (drivers right). When I got there, scouted the area, and walked to the end of the Bus Stop to a location where you are located below the track, and gives the impression the cars are at an elevated position. Also behind the cars is thick foliage, which gives a clean background. Max Chilton in the #8 Chip Ganassi Racing. Thought this car would look good in black and white. 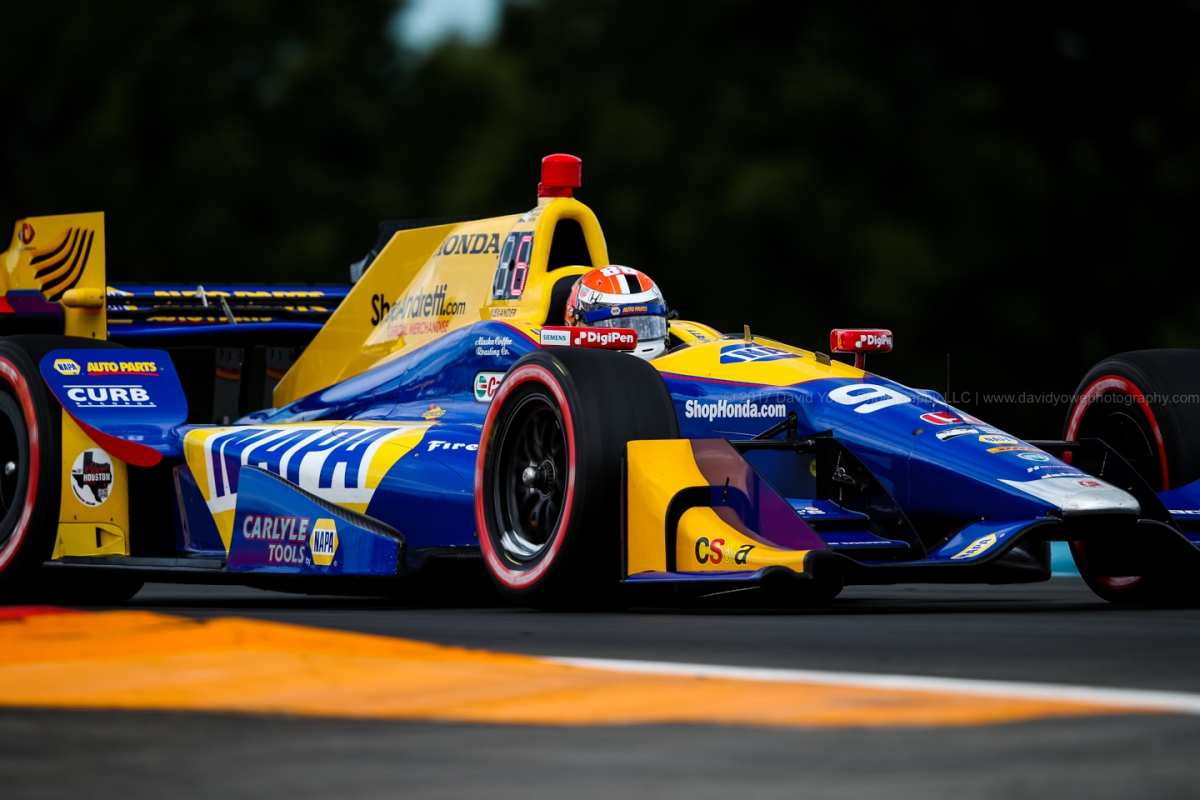 Alexander Rossi in the #98 Andretti Herta Autosport w/Curb-Agajanian. Rossi would go on and take pole-position with a time of 1 minute 22.46 seconds at a speed of 147.12 mph. 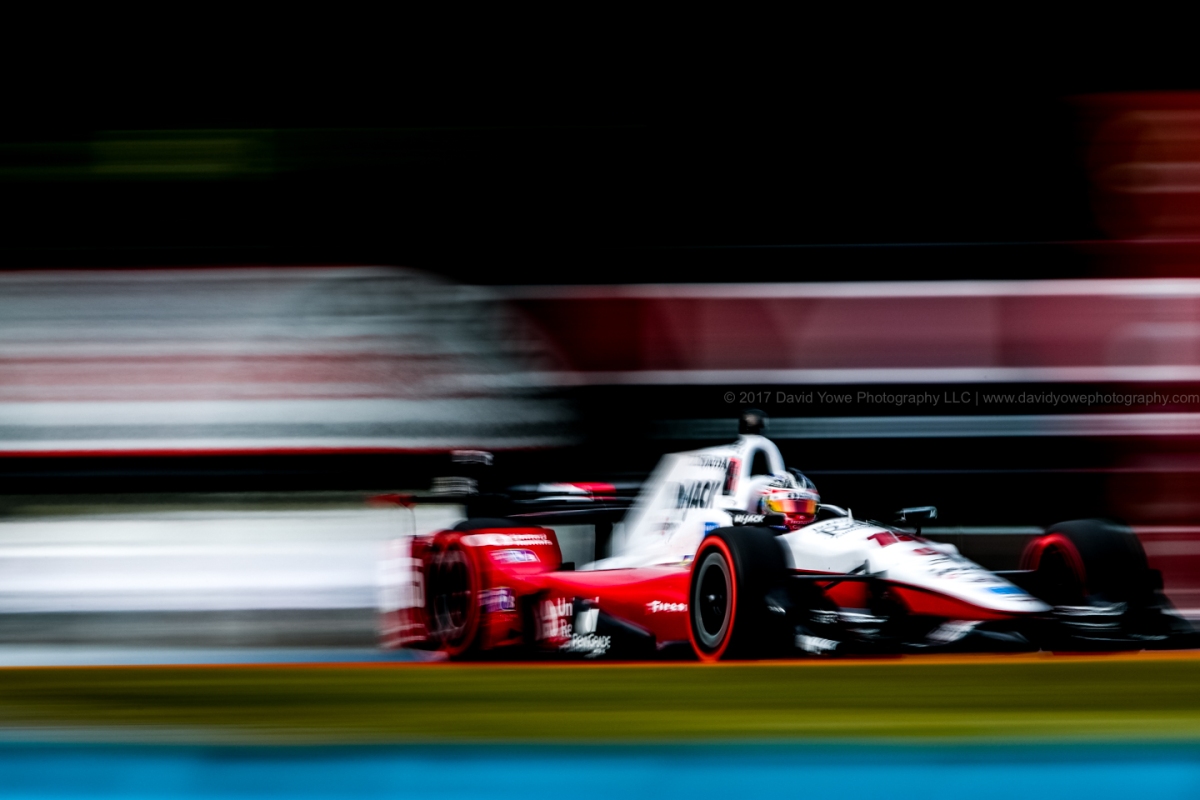 Noticed that as you look down towards the start of the Bus Stop, their is a good angle for panning the cars as they speed past the “I Love NY” sign. You can see the NY outline in the photo above of the #15 Rahal Letterman Lanigan Racing with Graham Rahal. Also liked how the white signage behind the car gave the appearance of an “afterburner”. 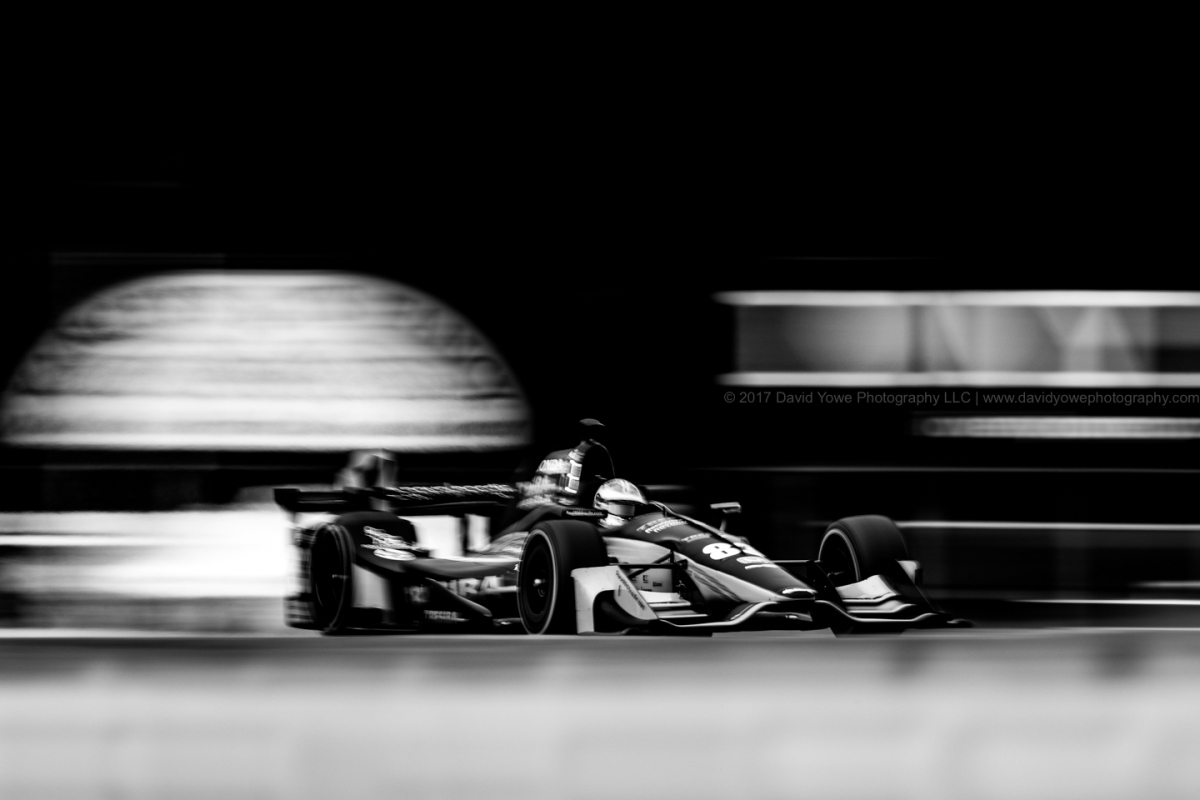 Thought this shot in black and white would emphasize the white signage behind the #83 Chip Ganassi Racing driven by Charlie Kimball. 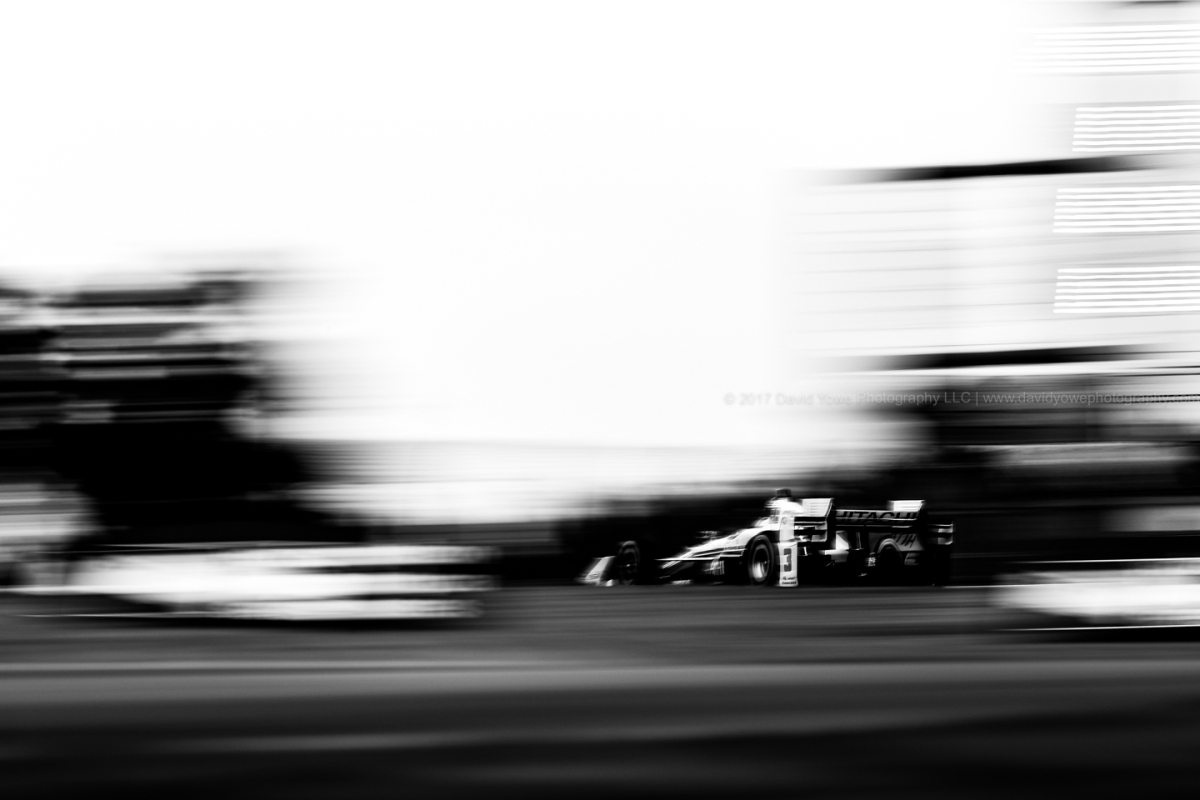 Arrived at the track early for the 7.30 am Photo Meeting. For the 9.00 am warm-up session headed back to the Bus Stop (drivers right), but stayed near the entrance to this location since wanted to get panning shots of the cars. Also, thought, if it it rained, it would be a good place to get rooster-tails of water. Rain threatened race day activities with dark skies above, and thought this shot of Helio Castroneves in the #3 Team Penske in black and white would reflect this. 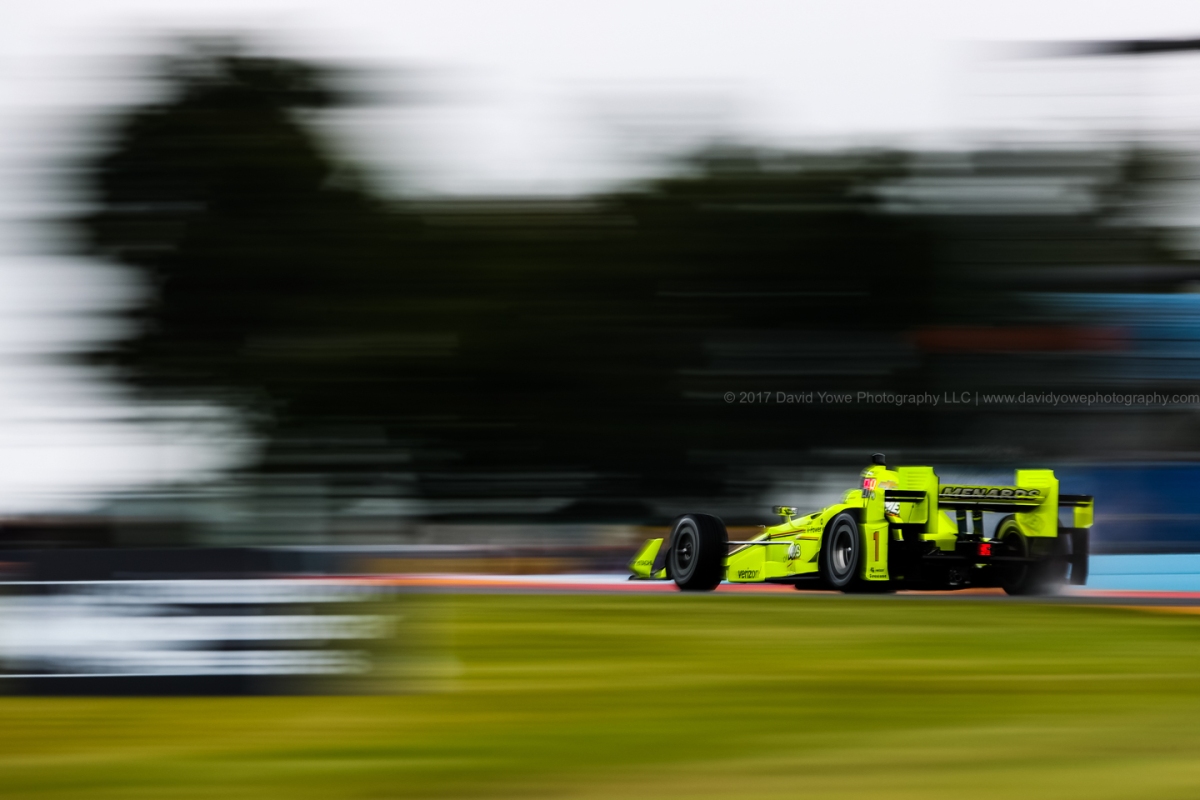 Light rain started to fall at the end of this session, and you can see some water-spray coming off the rear tires of the #1 Team Penske being driven by Simon Pagenaud. 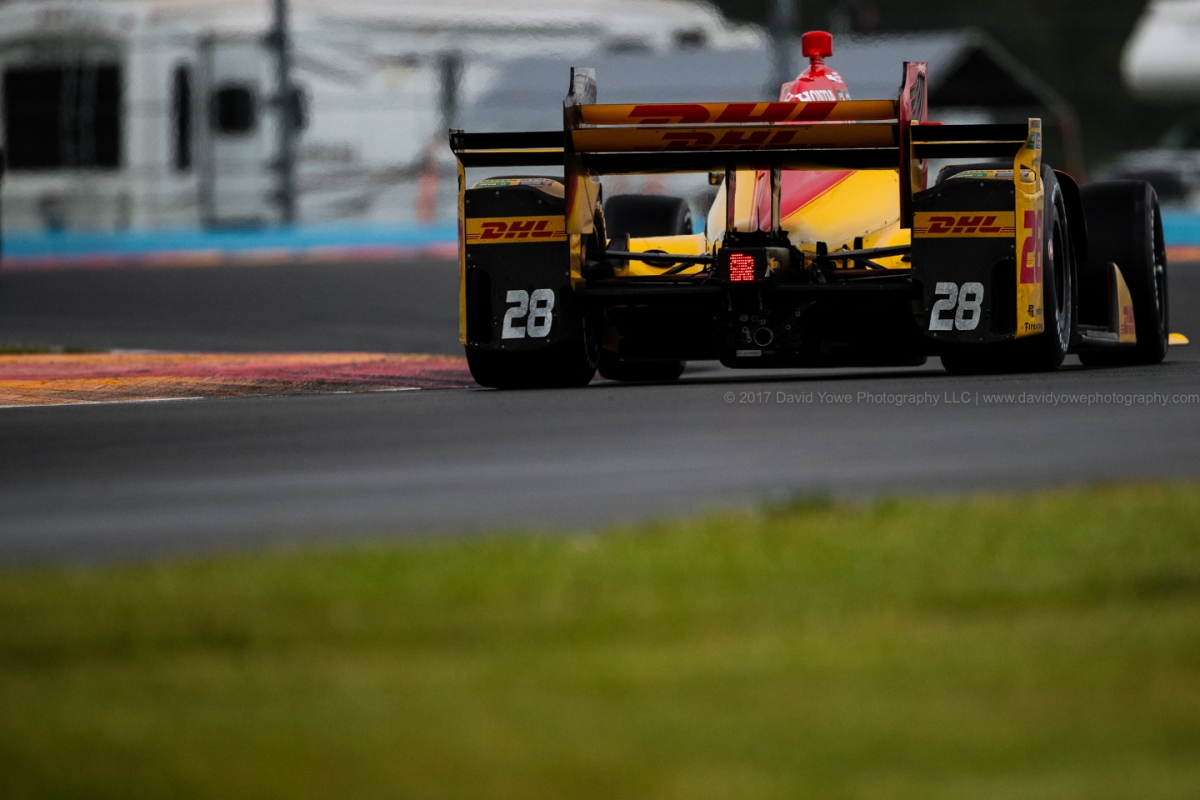 After getting some panning shots, wanted to get rear shots of the cars, but it was hard to get a clean background with all the camper vans in the background. Found a gully behind the safety fencing which allowed me to get low rear shots that helped to minimize the busy background. Ryan Hunter-Reay in the #28 Andretti Autosport. 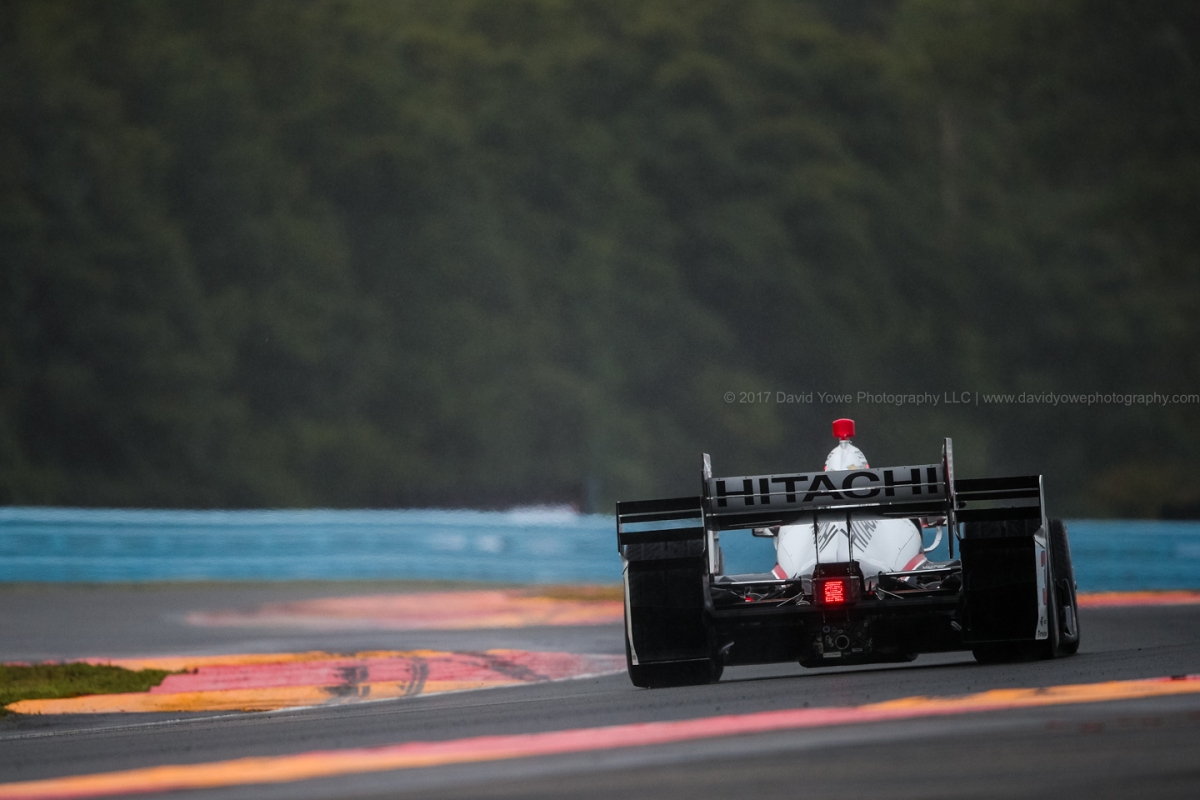 The rain started to get heavier as Helio Castroneves in the #3 Team Penske navigated the Bus Stop.

Here you can see the deep grooves of the wet weather tires on the #4 A.J. Foyt Enterprises being driven by Conor Daly.
Sunday – Race 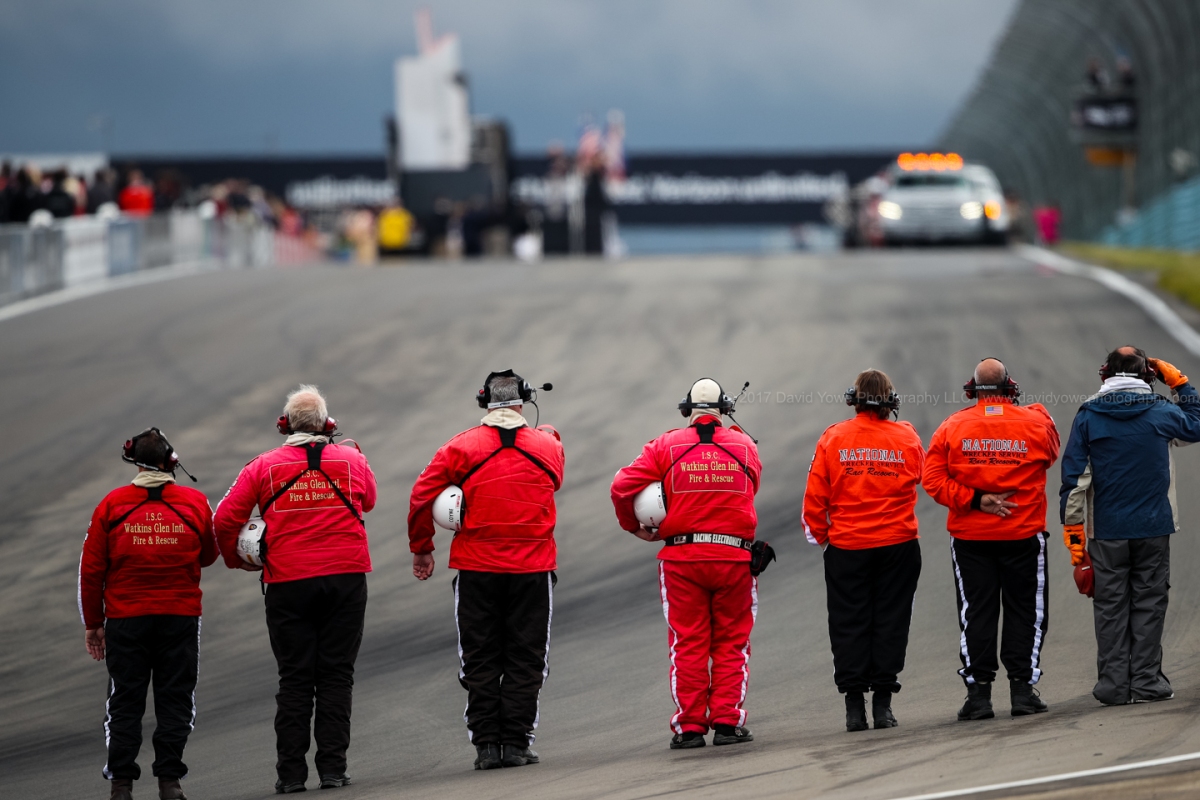 Before the race started their were the driver introductions and National Anthems.

For the start of the race went down to the outside of Turn 1. Was planning to go to the top right of the Seneca Grandstand for an elevated shot of the start, but decided against it, since the stand was very full with spectators. So went to the outside of Turn 1 where the other photographers were standing. Was thinking, is their a way to get a different angle, so looked around, and noticed another photographer standing behind the fence at Turn 1. Decided to shoot the start of the race “through the fence” since that location gave a more head-on shot of the cars speeding down the front straight. Here’s a series of shots of the start with Josef Newgarden in the #2 Team Penske breaking late, and eventual race winner Alexander Rossi in the #98 Andretti Herta Autosport w/Curb-Agajanian to his left.

Also processed the start in black and white which emphasizes the dark clouds above and the smoke coming off the #2 car as its brakes hard into Turn 1. 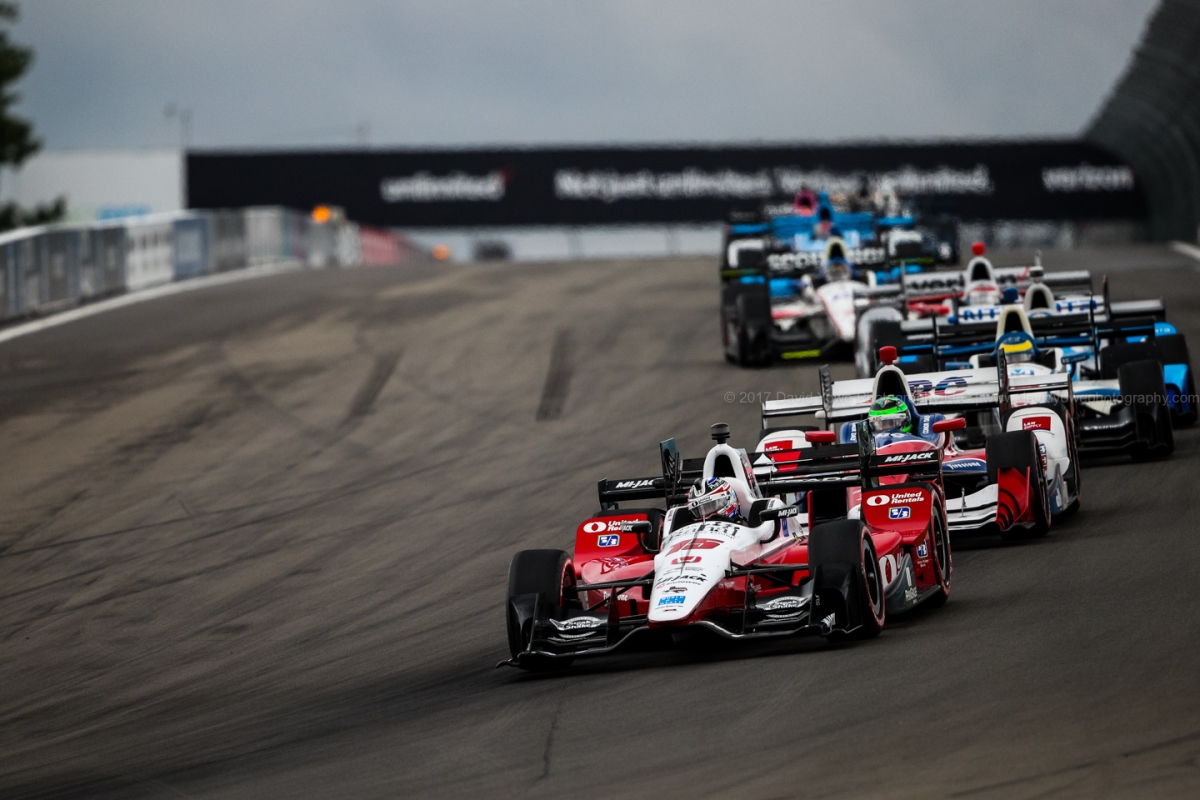 Graham Rahal in the #15 Rahal Letterman Lanigan Racing leading a trail of IndyCars into Turn 1.

As the race progressed walked down the hill from Turn 1 to get shots of the cars speeding down this straight. Alexander Rossi in the #98 Andretti Herta Autosport w/Curb-Agajanian leading down the Turn 1 to 2 straight. 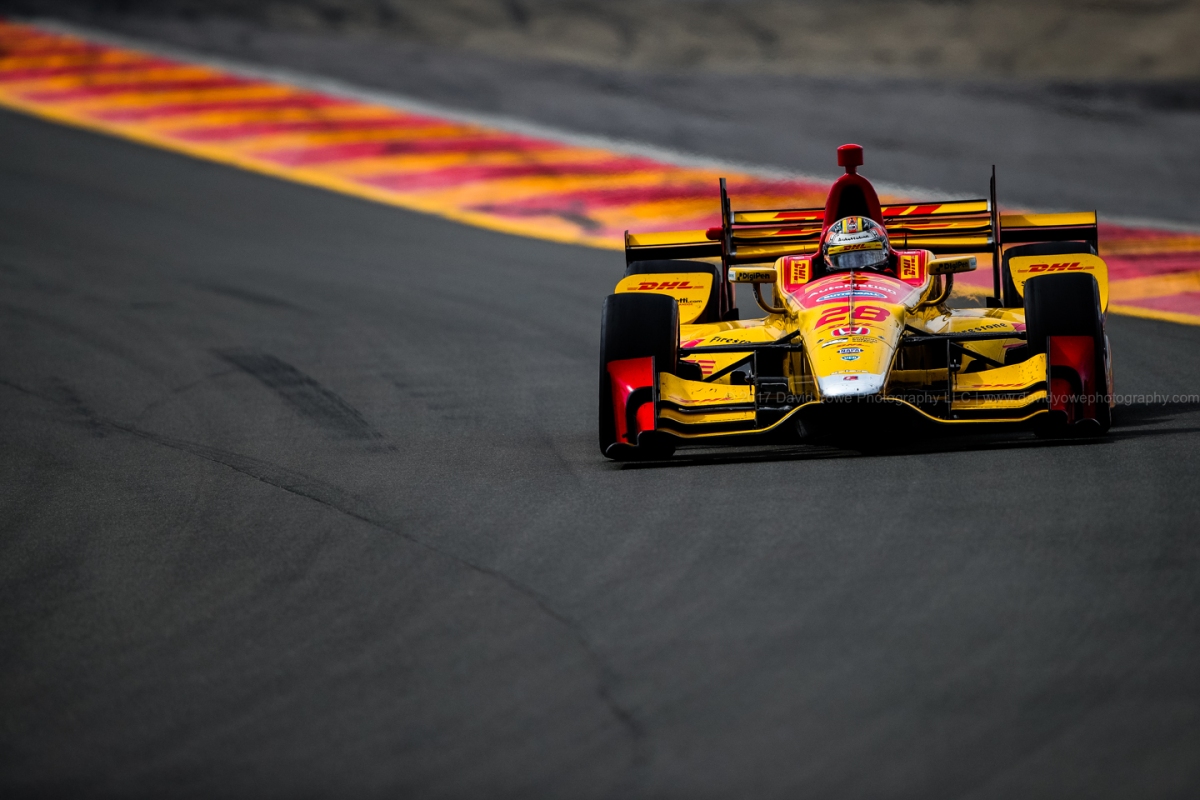 Ryan Hunter-Reay in the #28 Andretti Autosport turning into The Esses. Its amazing how much speed the IndyCars take into this part of the race track. As the cars passed me, I could literally feel them due to the wind they created.

Here’s a rear shot of the IndyCars speeding into Turn 2. Max Chilton in the #8 Chip Ganassi Racing.

A couple of more shots of Alexander Rossi in the #98 Andretti Herta Autosport w/Curb-Agajanian during the closing laps of the race. Upper photo going through Turn 2. Lower photo is a shot of the #98 speeding down the Turn 1 to 2 straight from the top of The Esses on drivers right.

With several laps of the race remaining, headed back to the Media Center and dropped off my large lens and took the 35mm lens for the podium. Wanted to get a different angle, so went to the veranda that overlooked Victory Circle for shots of Alexander Rossi in the #98 Andretti Herta Autosport w/Curb-Agajanian and team celebrating his first road race win. Congratulations to Rossi on this victory.
Many thanks to the staff of Watkins Glen International and others who helped me over the weekend. Had a great time and hope to be back next year. Thanks for spending the time to read this blog.