Day two at Road Atlanta would see the WeatherTech Sportscar Championship cars on the track for three practice sessions. Practice one was in the morning, second practice in the afternoon, and the third was at night. This was a great opportunity to explore the track and to get shots of the cars from day to night. Hope you like the photos.

Arrived at the track around 7.00 am so could get my gear together before the 8.00 am photo meeting. After the meeting went over to the main paddock to get shots of the WeatherTech Sportscar Championship teams setting up their cars for the morning practice session.

#66 Ford Chip Ganassi Racing Ford GT. Really liked how the team used different colored LEDs to denote the #66 (red LEDs) from the #67 car (blue LEDs) in the bodywork on either side of the cars.

Was cool to get a look into the cockpit and see all the dials, buttons, and levers that the driver needs to know the function of in order to maximize the performance of their race car. 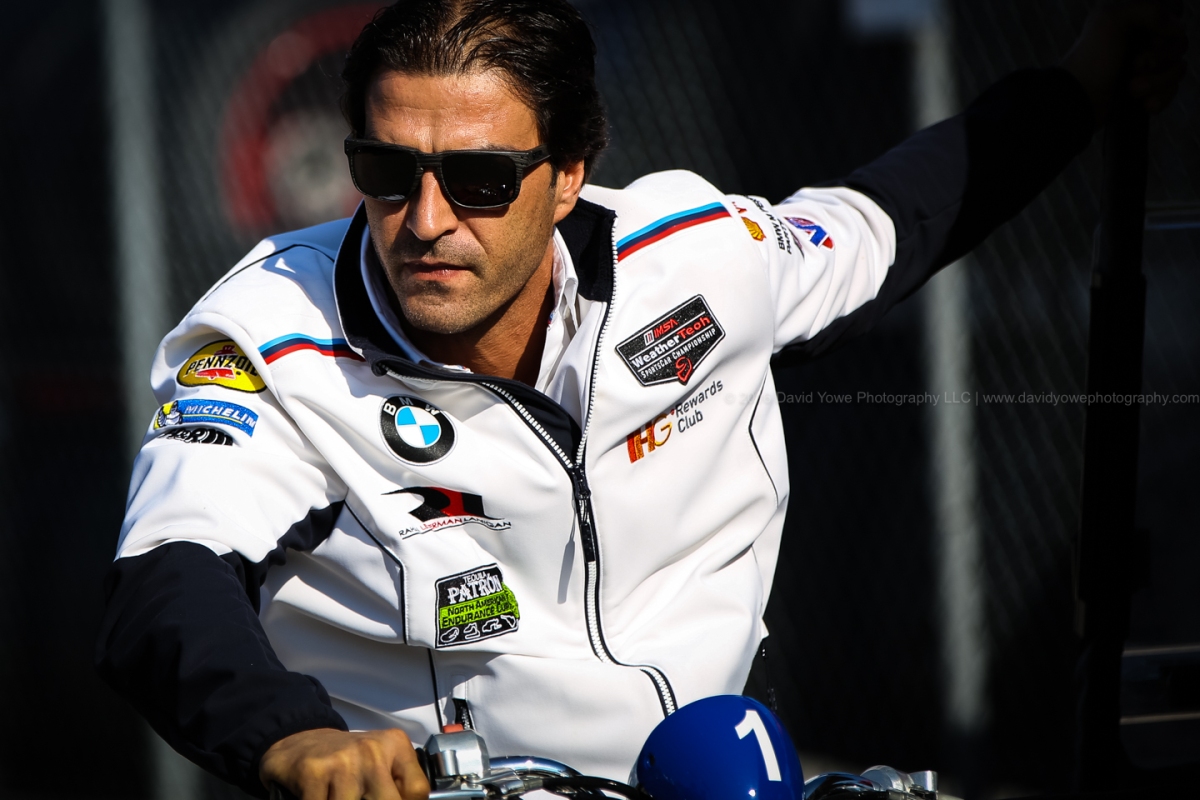 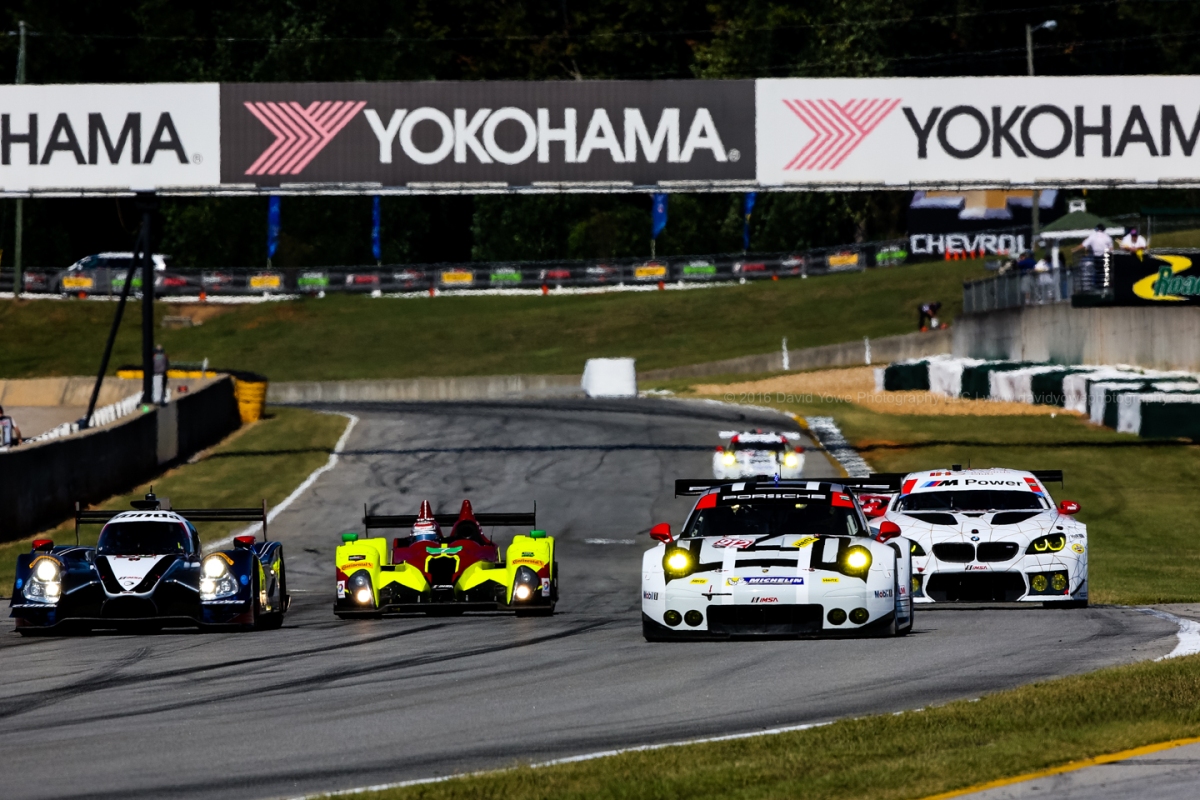 For the WeatherTech Sportscar Championship morning practice session (11.15 am), took a photo van to the outside of Turn 1. Planned to start at Turn 1, then work my way up the outside of the track as the practice session progressed. This way the morning sun would illuminate the front and/or drivers left-hand side of the car. Was really cool seeing four cars abreast as they entered this right-hand corner. 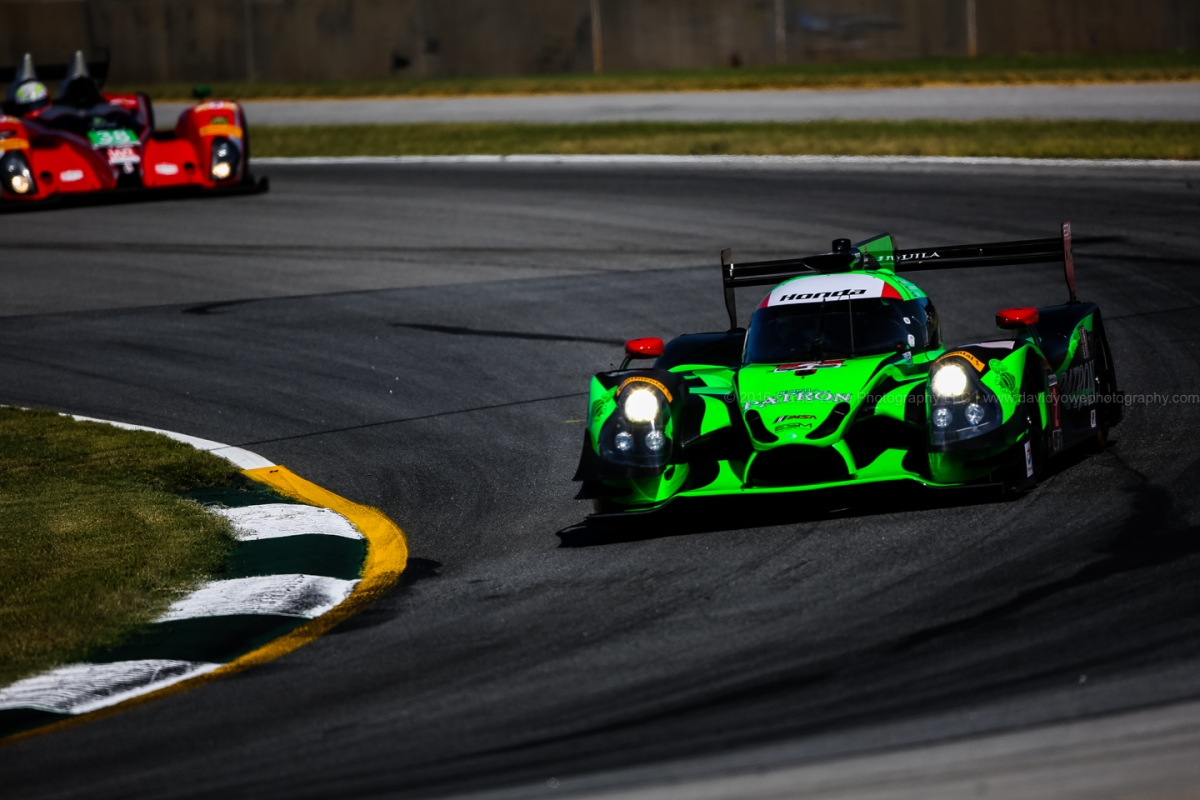 Continued walking along the outside of the track and stopped for some 3/4 panning shots of the cars as they sped up the hill after Turn 1 as shown below. 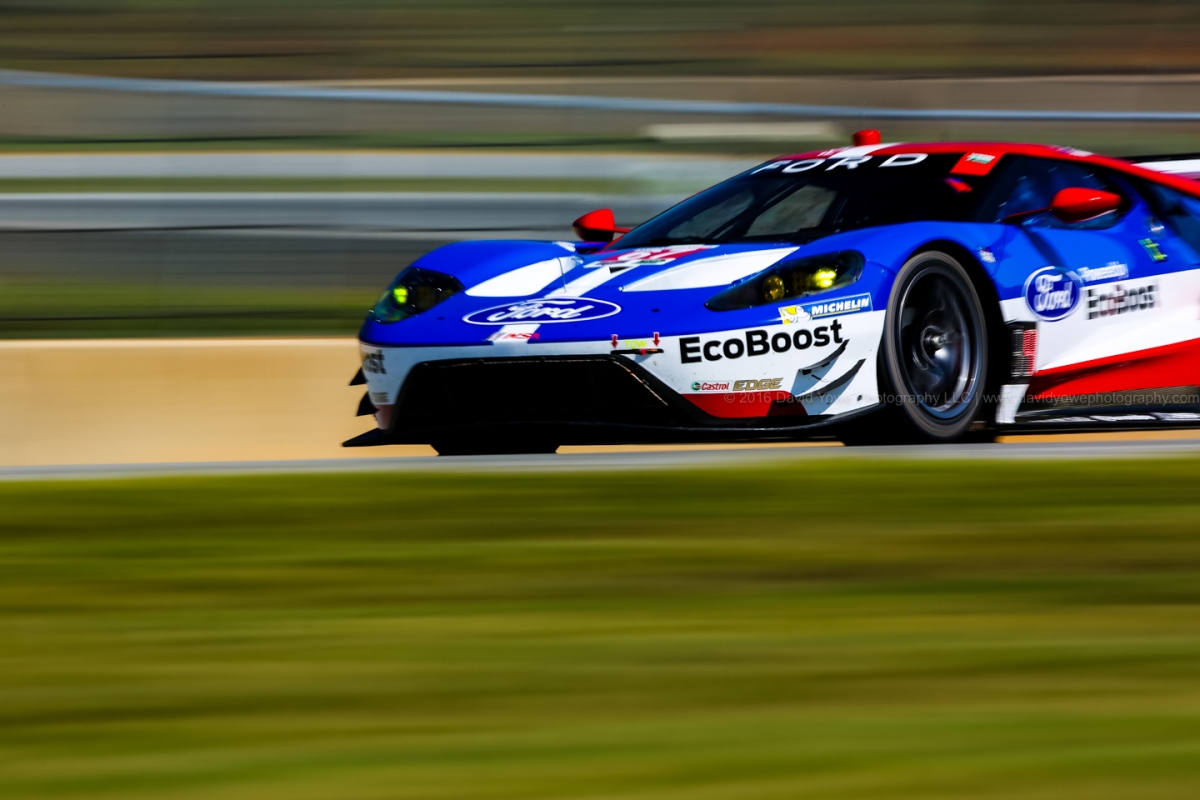 As I was walking along the outside of Turns 2 to 3, turned around, and noticed how the cars coming over the hill looked like they were “skimming” the grass. Turner Motorsport BMW M6 GT3. 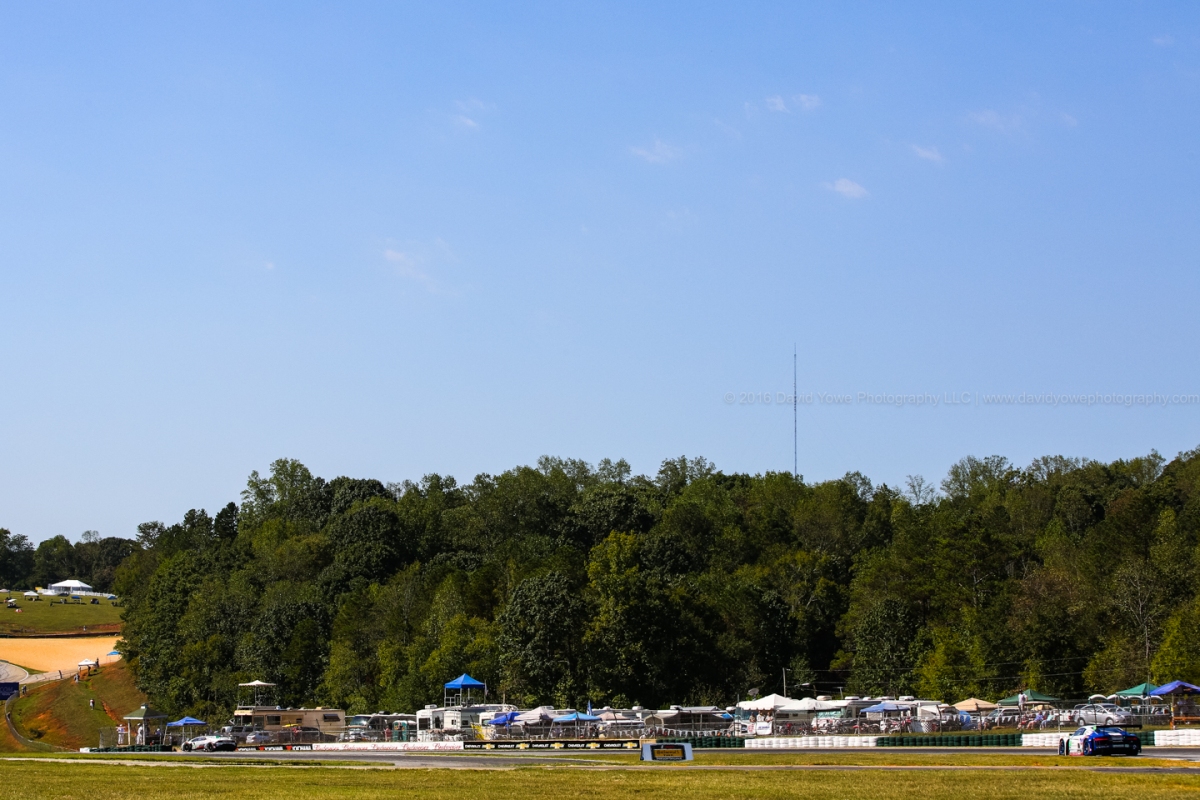 Here’s a couple of wide shots of the Turn 3 to 4 complex.

Kept walking and stopped at a location between Turns 3 and 4 to get shots of the cars coming over the hill. Left headlight on with the #912 Porsche North America Porsche 911 RSR and Earl Bamber or Frederic Makowiecki.

This is one of my favorite shots. Was lucky to get the red, white, and blue livery of the Ford GT and the red colored bus in the background. #66 Ford Chip Ganassi Racing Ford GT with Joey Hand, Dirk Mueller, or Sebastien Bourdais.

The Esses into Turn 5.

Beautiful blue skies and white clouds were overhead when the practice session ended. Headed back to the Photo Hut to edit the morning’s photos and to get some lunch.

The afternoon practice session was scheduled to start at 3.25 pm, so took a photo van about 30 minutes in advance of the session to the outside of Turn 5. When I go there, spectators were already in place for the afternoon’s practice.

For this session decided to start at the inside of the hill (drivers right) that leads into Turn 5, then work my way over to the top of Turn 5. As I was waiting for the session to start, noticed the US Flag against some beautiful back-lighting. 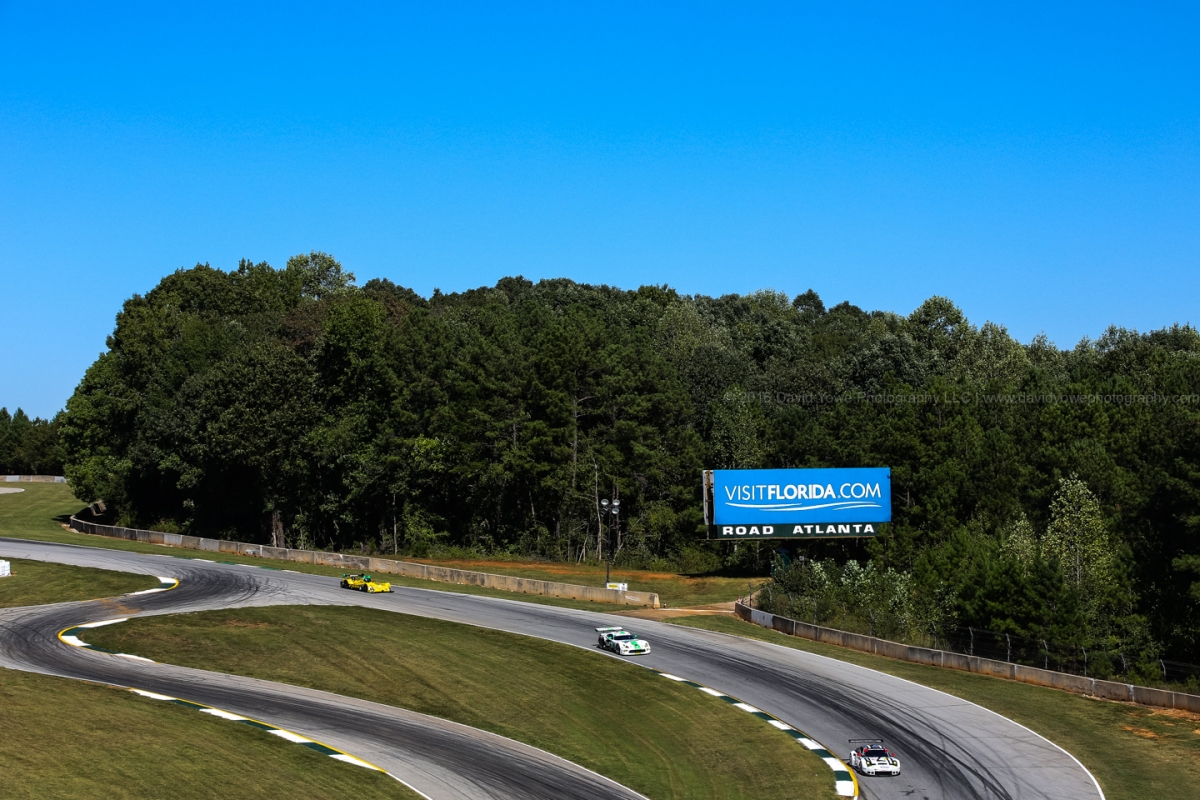 It wasn’t long until the cars hit the track for the afternoon practice session. Here’s some shots looking towards Turns 3 and 4 from the bottom of the hill before Turn 5. 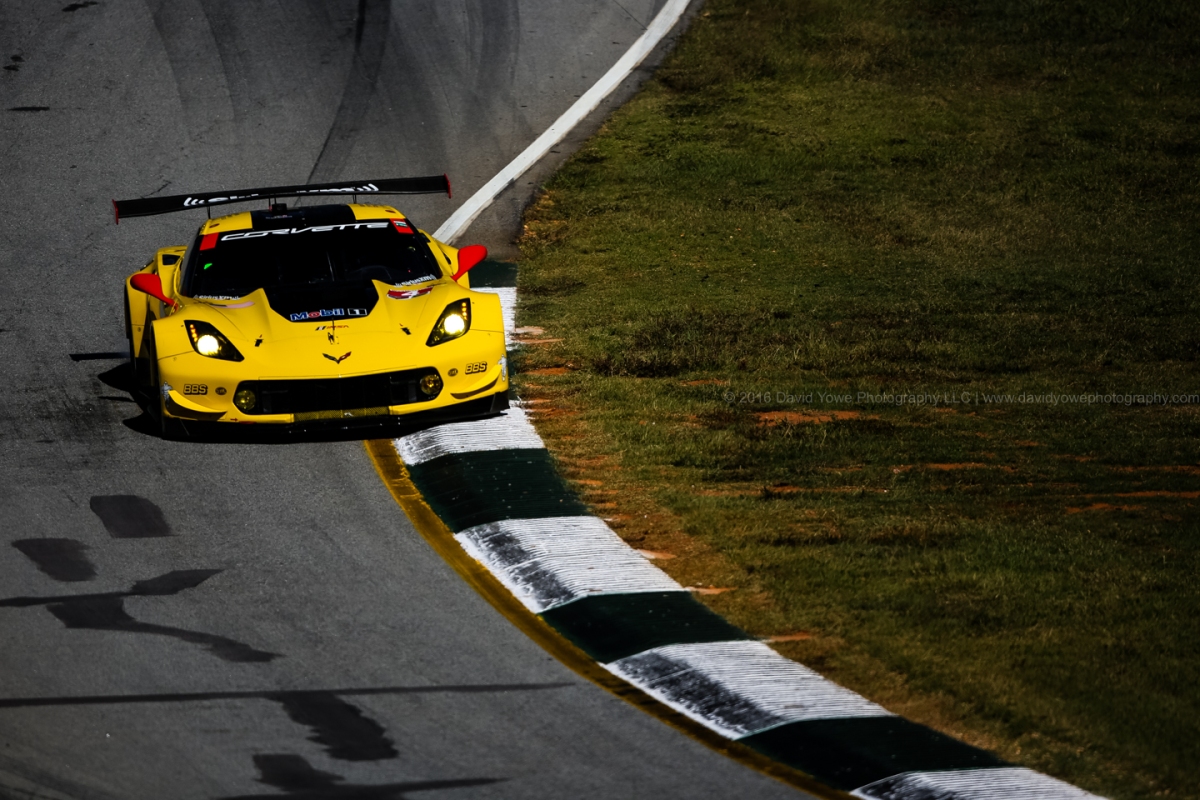 Over the kerbing with the #4 Corvette Racing Corvette C7.R and Oliver Gavin, Tommy Milner, or Marcel Fassler. 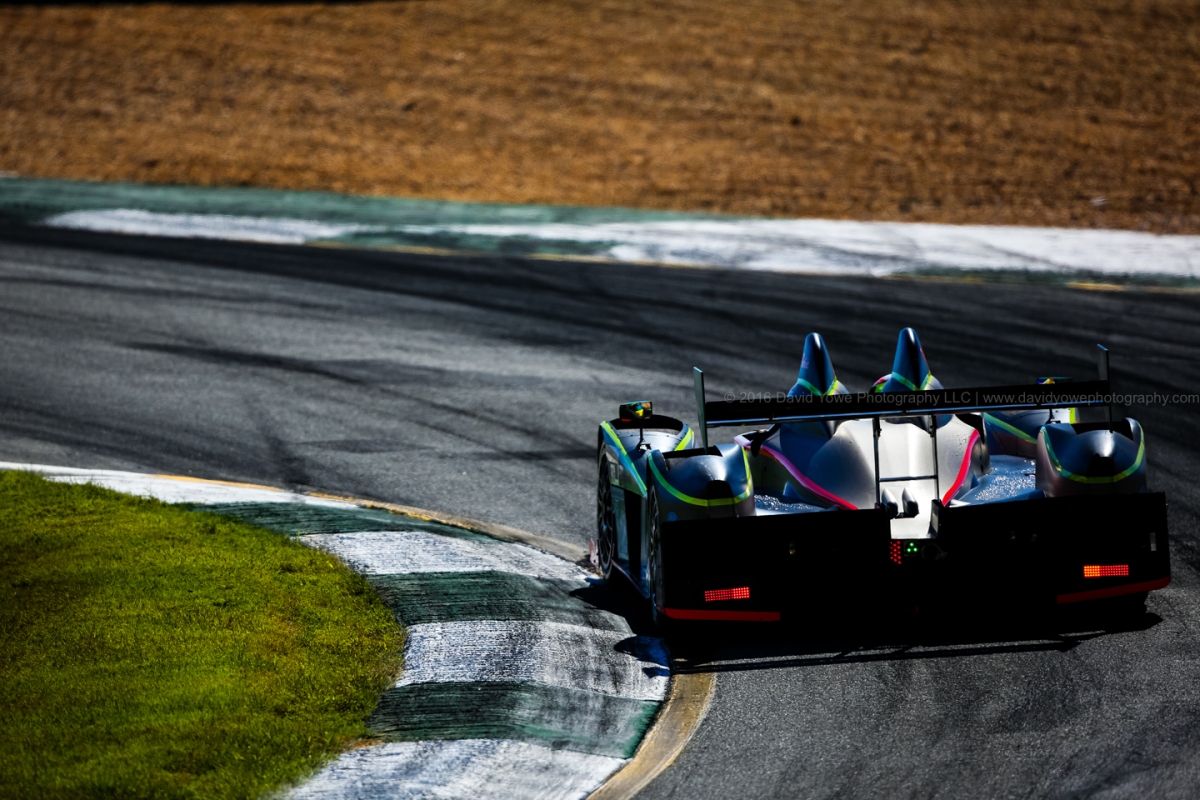 The #52 PR1/Mathiasen Motorsports ORECA FLM09 and Robert Alon, Jose Gutierrez, or Tom Kimber-Smith taking the corner into the hill before Turn 5. 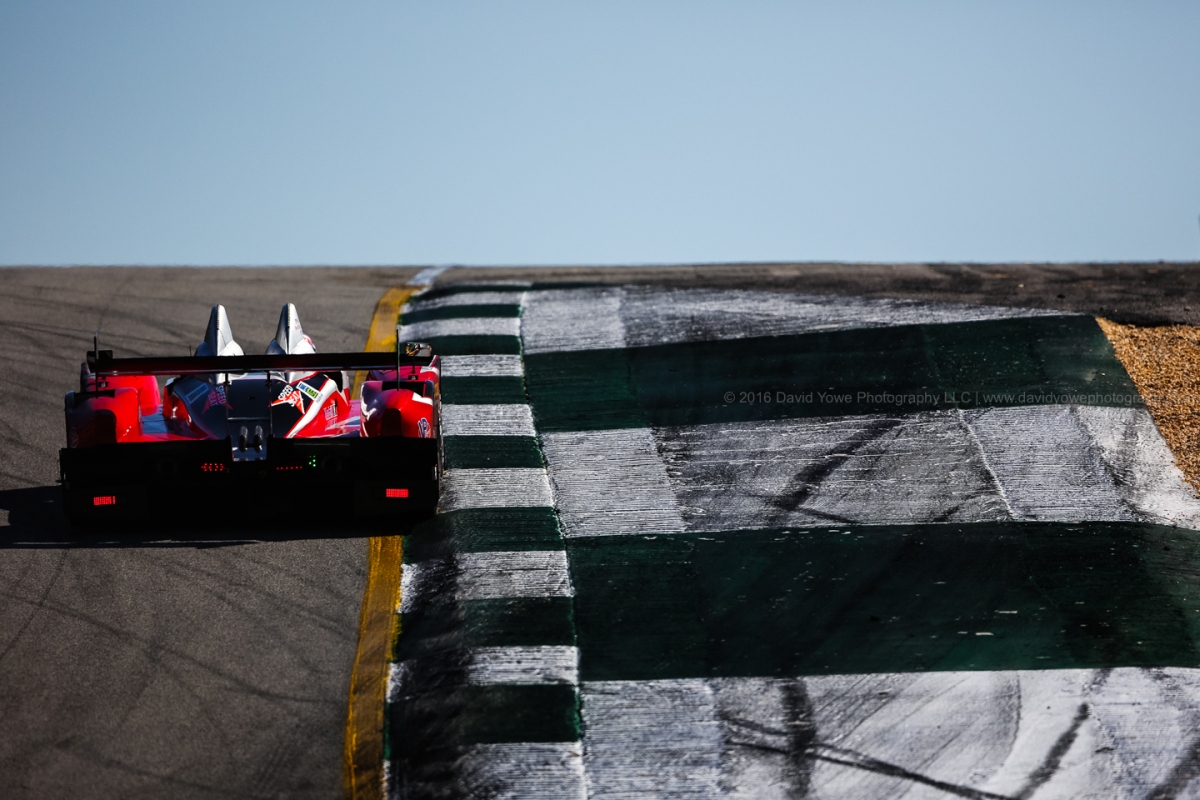 As the session progressed started to walk towards Turn 5. Ascending into this uphill turn with a Prototype Challenge ORECA FLM09. 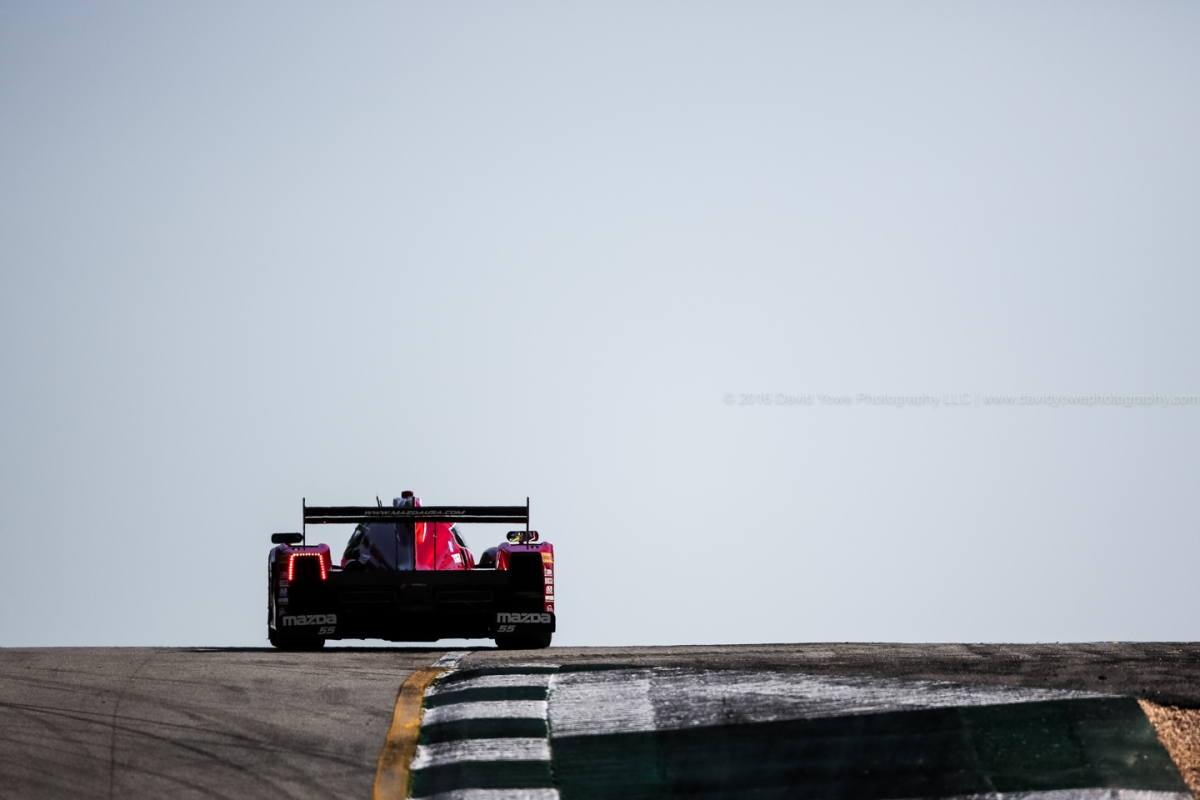 At the top of Turn 5 with the #55 Mazda Motorsports Mazda Prototype and Tristan Nunez, Jonathan Bomarito, or Spencer Pigot.

Made it to the inside of the track at the top of Turn 5. At this location there’s a platform (lower left of photo) where you can get an elevated view that allows for less foreground being in your shot of the The Esses. Also, to the left of the catch fencing, you can step back and away from the track for panning shots of the cars they speed along the straight into Turn 6. Examples of these shots are below.

Here’s a shot of the last part of The Esses as the track dips from Turn 4 and rises into Turn 5. Must feel great to be driving a race car at speed though this part of the track.

The #48 Paul Miller Racing Lamborghini Huracan GT3 with Bryan Sellers, Madison Snow, or Bryce Miller leading a series of cars through The Esses.

After the cars leave Turn 5, their is an opportunity before the Flag stations to get panning shots of the cars as they enter the straight into Turn 6. The #88 Starworks Motorsport ORECA FLM09 Mark Kvamme, Richard Bradley, or Maxwell Hanratty.

The #33 Riley Motorsports Dodge Viper GT3-R with Ben Keating, Jeroen Bleekemolen, or Marc Miller. Really liked how the light cast a shadow of the rear spoiler behind the car.

The afternoon practice session finished around 4.25 pm, so took a photo van back to the Photo Hut for processing/uploading photos and to get some dinner.

For the night practice session took a photo van to the cross-over bridge at Turn 11, then walked over to the outside of Turn 10B. By this time, dusk had settled in.

The cars hit the track at 7.30 pm. Outside pass with the #23 Team Seattle/Alex Job Racing Porsche 911 GT3 R and Ian James, Mario Farnbacher, or Alex Riberas.

Bimmer in the night with the #100 BMW Team RLL BMW M6 GTLM and John Edwards, Lucas Luhr, or Kuno Wittmer.

One of the Prototype Challenge cars applied its brakes hard at Turn 10A, then went into the gravel trap. 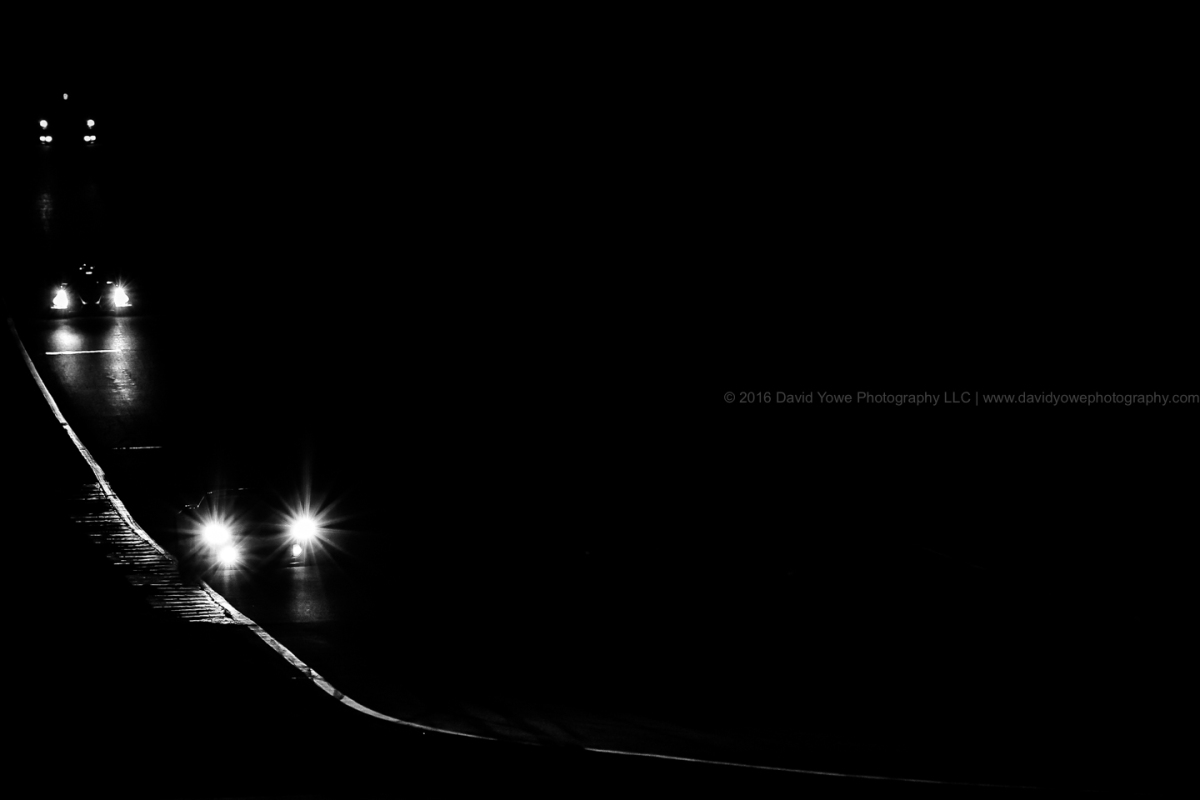 Towards the end of the practice session headed over to the outside of Turn 10A for some shots of the cars descending the hill into this corner. 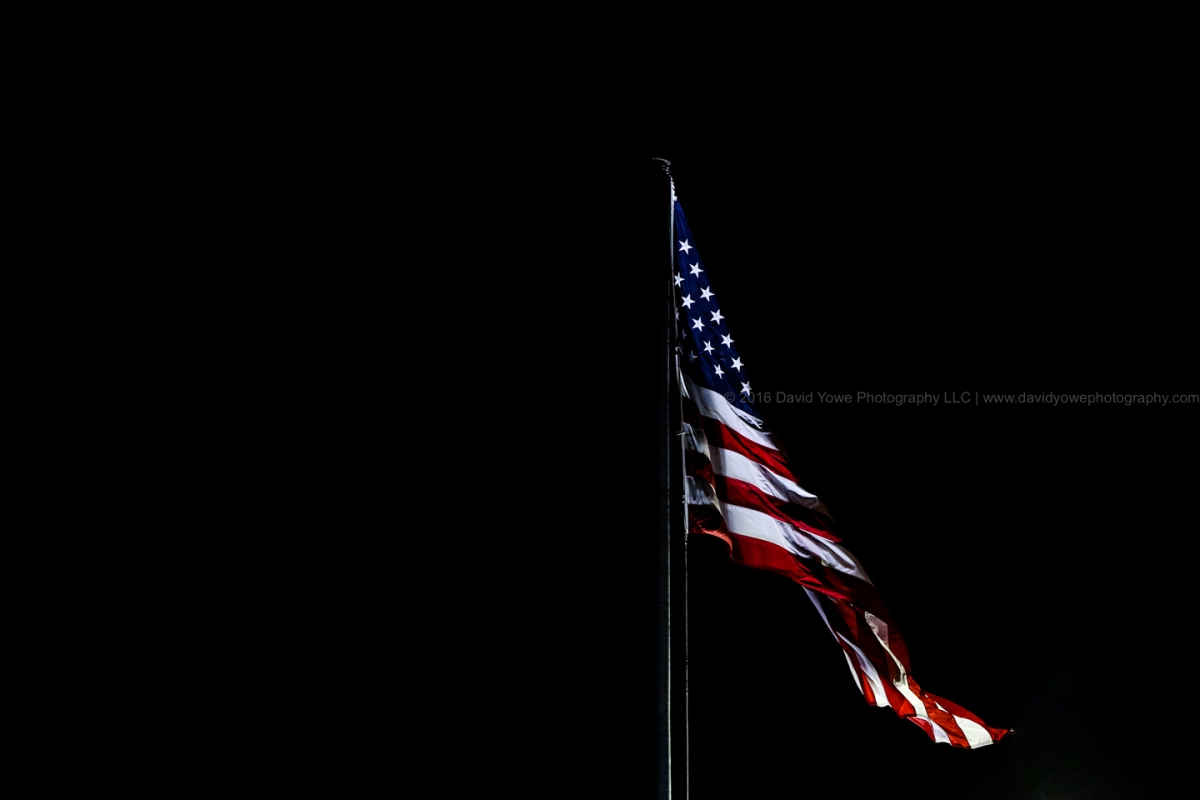 The practice session ended at 9.30 pm, and on my way back to the Photo hut saw the Stars and Stripes bathed in floodlights. 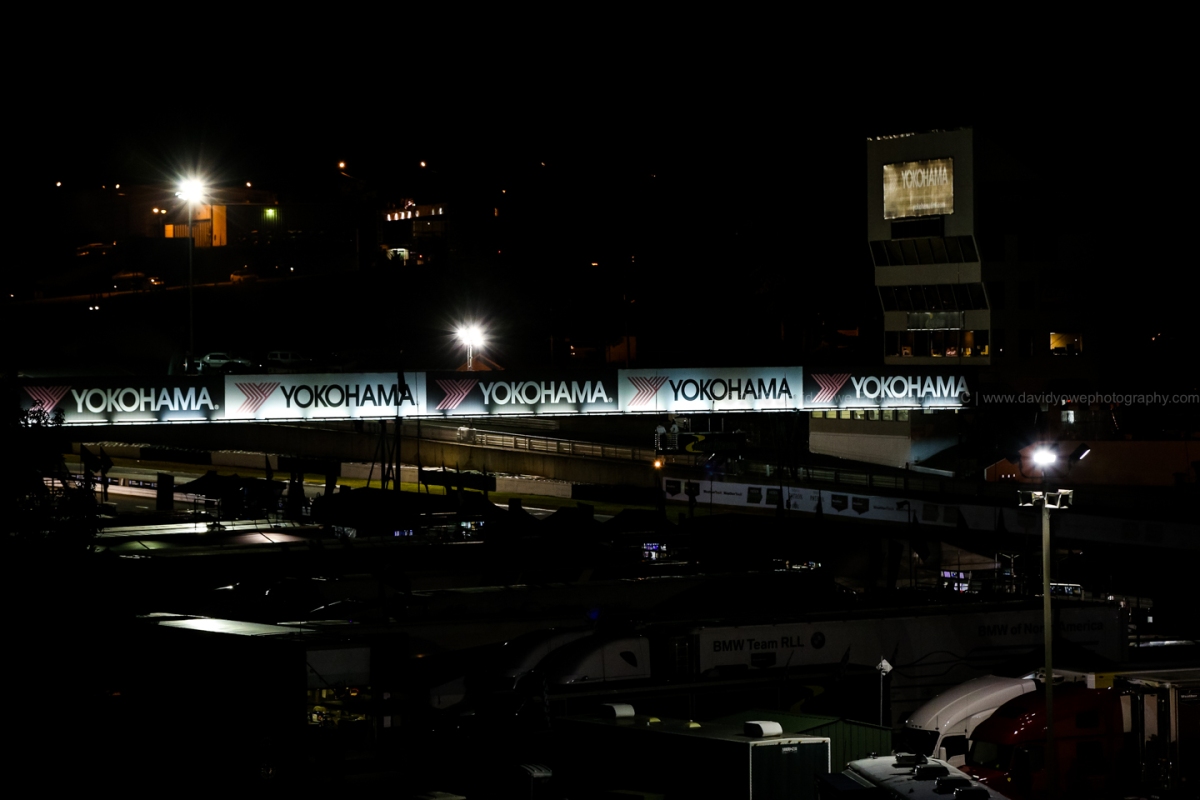 Arrived at the hill that overlooks the main paddock, then continued on through the paddock.

The Porsche pavilion which overlooks the main paddock. 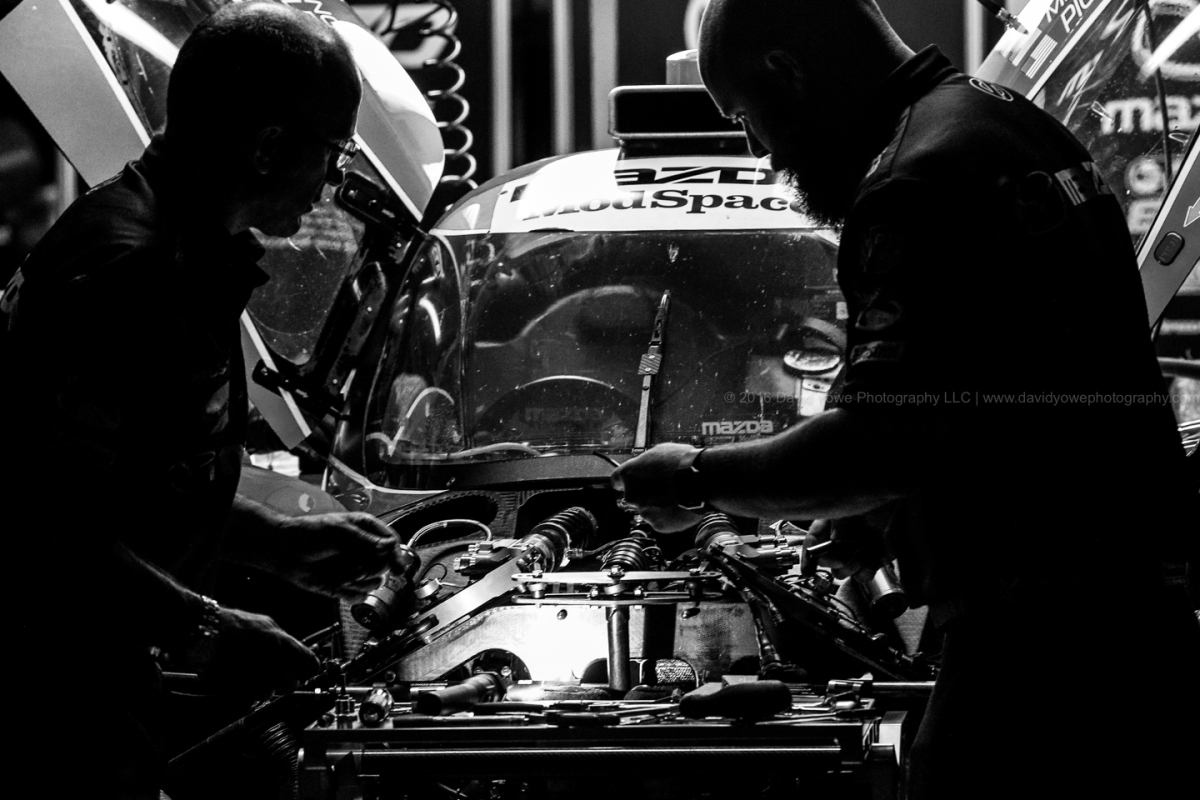 Despite the late hours, mechanics were hard at work servicing their cars.

Last photo for the night. The red, silver, and black livery on #73 Park Place Motorsports Porsche 911 GT3 R bathed in light and dark.

When I got back to the Photo Hut, put my camera batteries in their chargers, grabbed some food, and edited/uploaded photos. Was a long day, but was great to capture the cars under the different lighting conditions. Left the track around 11.30 pm and was looking forward to a good nights sleep.