Saturday is always a busy day for IMSA at Lime Rock Park, with two back-to-back races. This blog is about the Lime Rock Park 120 and the Northeast Grand Prix. Hope you like the photos. 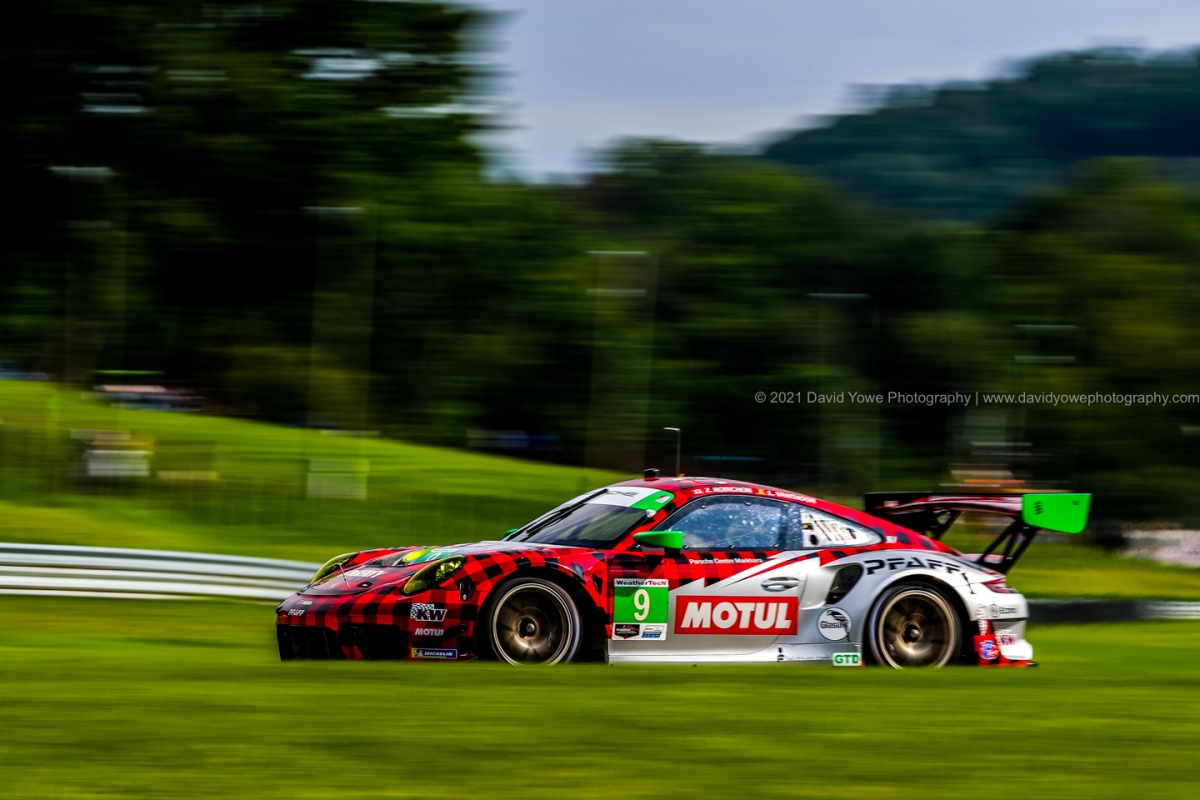 Arrived at the track around 7.30 am, and went to the media center to get set-up. For the 9.00 am morning warm-up decided to go to the outside of the Right-hander. This is a great spot to photograph the cars with the morning light illuminating the grass lined hills and the drivers side of the cars as they navigate the twists and turns of the Esses. Here’s a shot of the #9 Pfaff Motorsports Porsche 911 GT3R speeding up the Right-hander.

As the session progressed walked up to a location just past the safety marshals stand. Here you can get panning side shots of the cars as they go through the Right-hander, with the paddock and the outer field spectator area in the background. The #96 Turner Motorsport BMW M6 GT3. 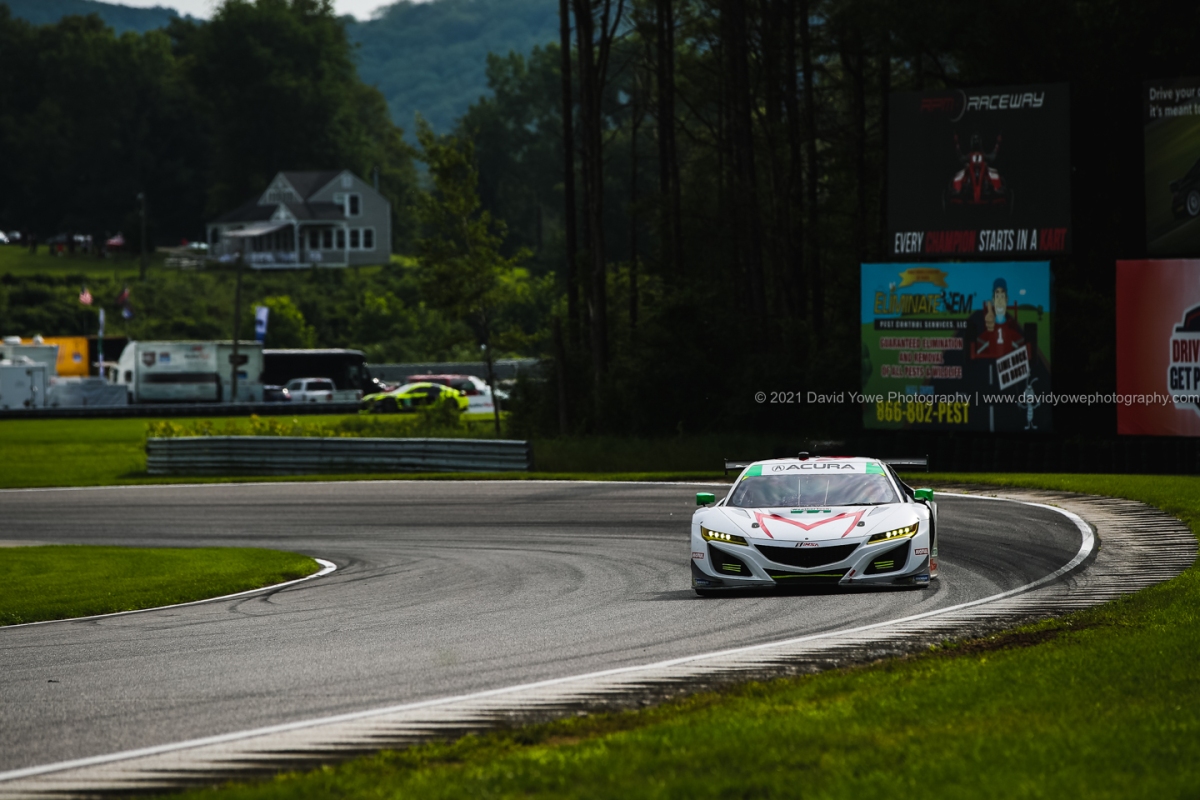 You can also get front on shots as they go into No Name Straight. The #44 Magnus with Archangel Acura NSX GT3. 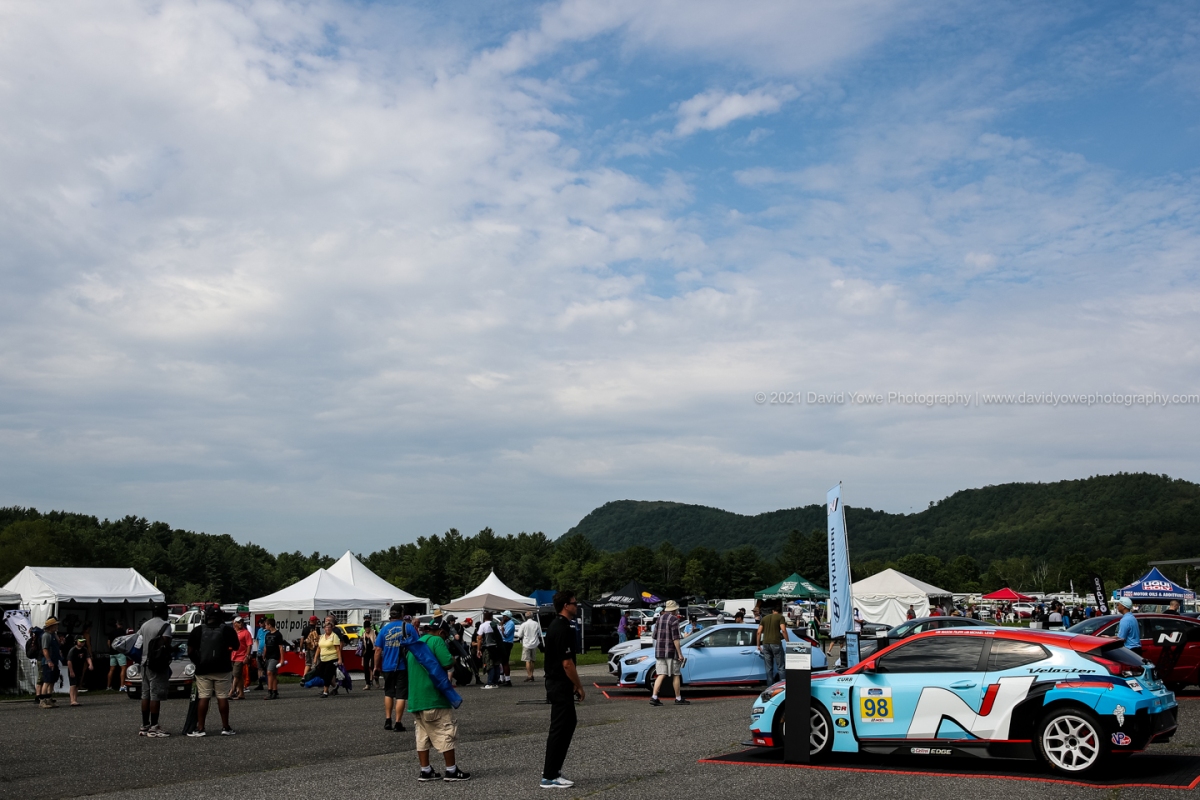 After the warm-up session finished at 9.25 am, walked back along the bottom of the Infield Spectator area, up the hill to the Midway (top), then back down the hill (middle) to the paddock (bottom) for some shots of the fans. Was great to see people back at the track. Gave myself enough time to go back to the media center to “refuel” with some snacks and soda, then headed back out.

The pre-race grid walk for the Michelin Pilot Challenge race started at 10.05 am and lasted to 10.50 am, so spent some time walking along the grid for shots of the cars with spectators, then headed over the pedestrian bridge which crosses the Sam Posey Straight to the Outfield Spectator area.

After exiting the bridge, walked up the hill and found a location where I could frame a shot with the iconic tower in the background for the start of the race, as well as a shot of the Infield Spectator area. Always feel very moved when the national anthem is played before the start of the race and seeing all the people standing in its honor. 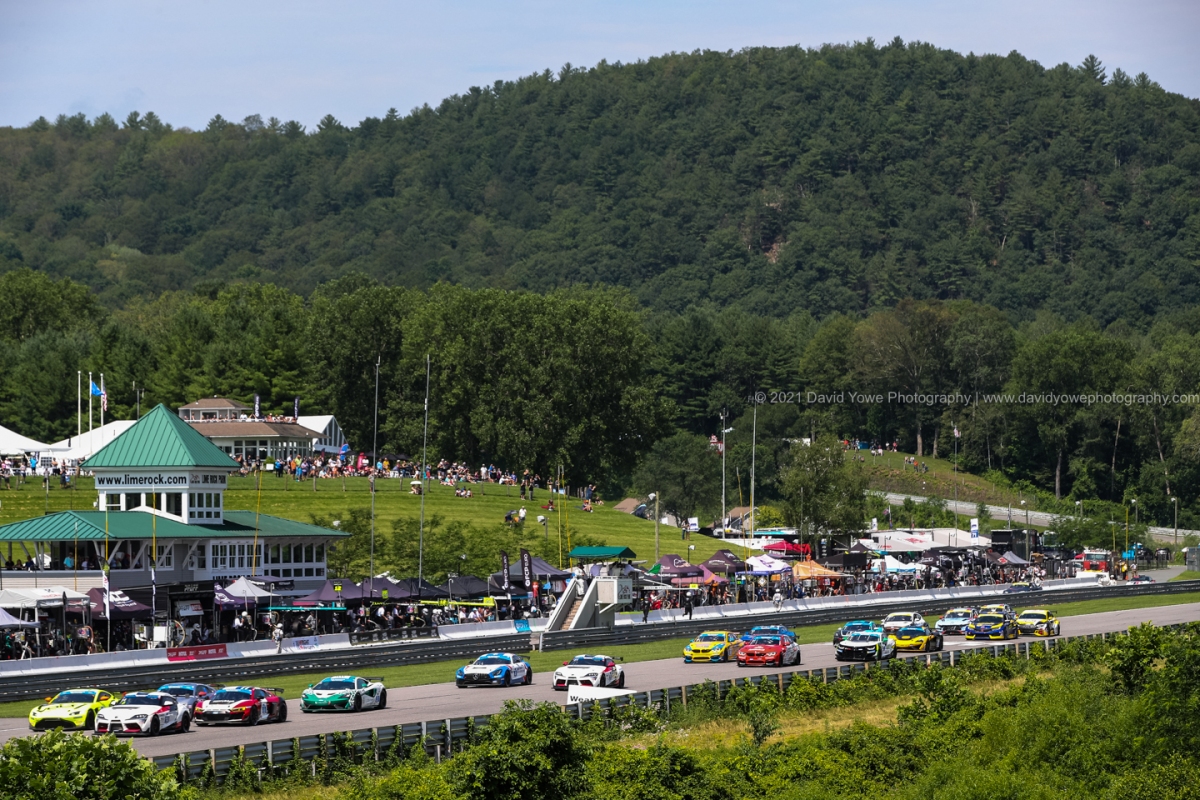 Race start, with the cars speeding down Sam Posey Straight past the green flag being waved in the main straight Marshalls stand. 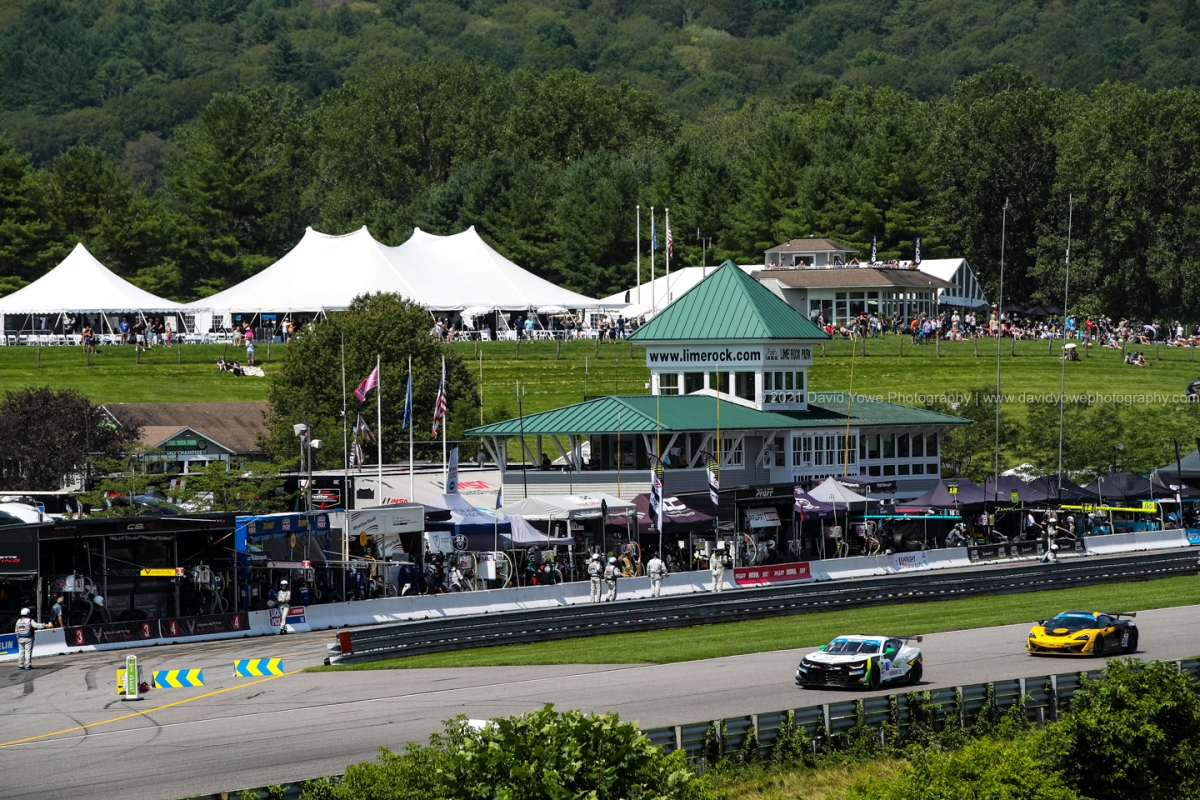 After getting the editorial shots, tried some artsy panning shots at slow shutter speeds of the cars racing down Sam Posey Straight. 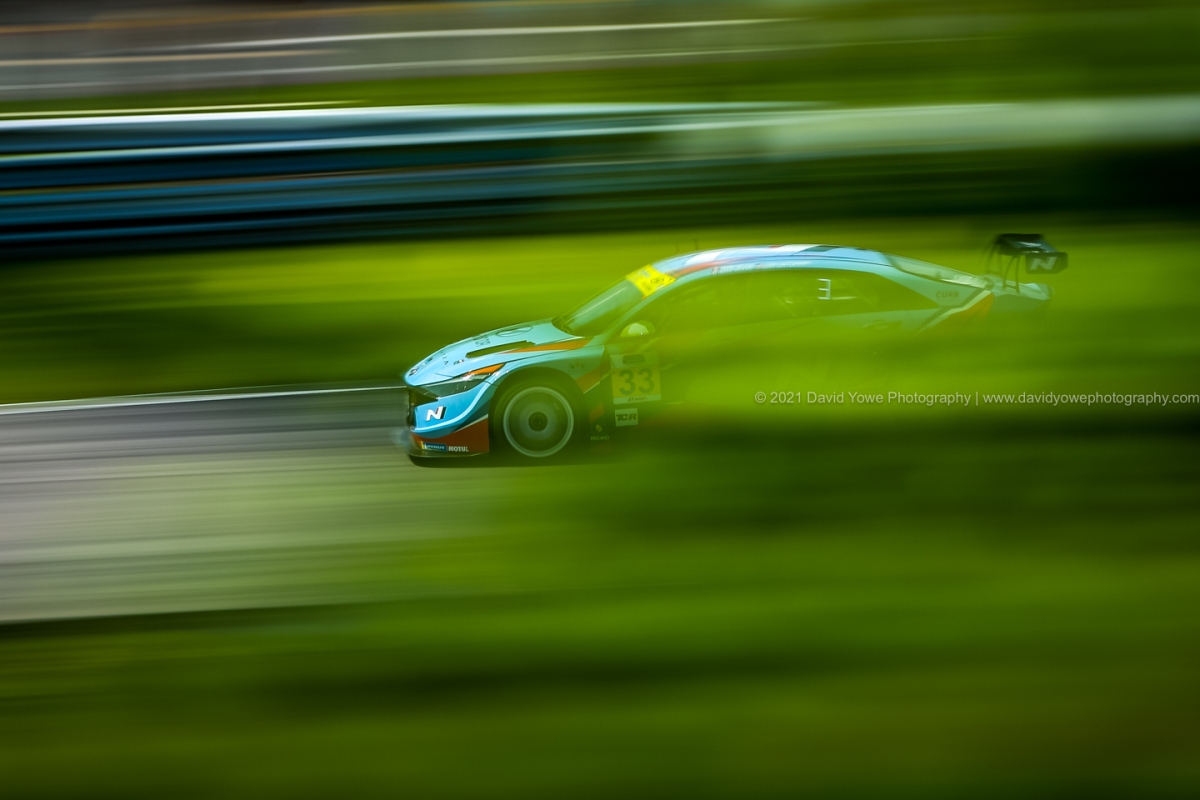 As the race progressed, crossed back over the pedestrian bridge and went to the inside of the exit of Big Bend for some panning shots of the cars as they raced into the straight before the Left-hander with the Infield Spectator area in the background. The #16 Wright Motorsports Porsche 718 Cayman GT4 Clubsport.

Continued walking along the track for some shots of the cars exiting the Left-hander, with spectators in the background.

Then took some panning shots of the cars with the spectator lined Infield area in the background. After getting these shots headed to the podium for race celebration photos. After the podium was over, grabbed some food from the vendor stand, then headed to the media center to re-charge and to upload photos. It’s amazing how fast the two hour race went. 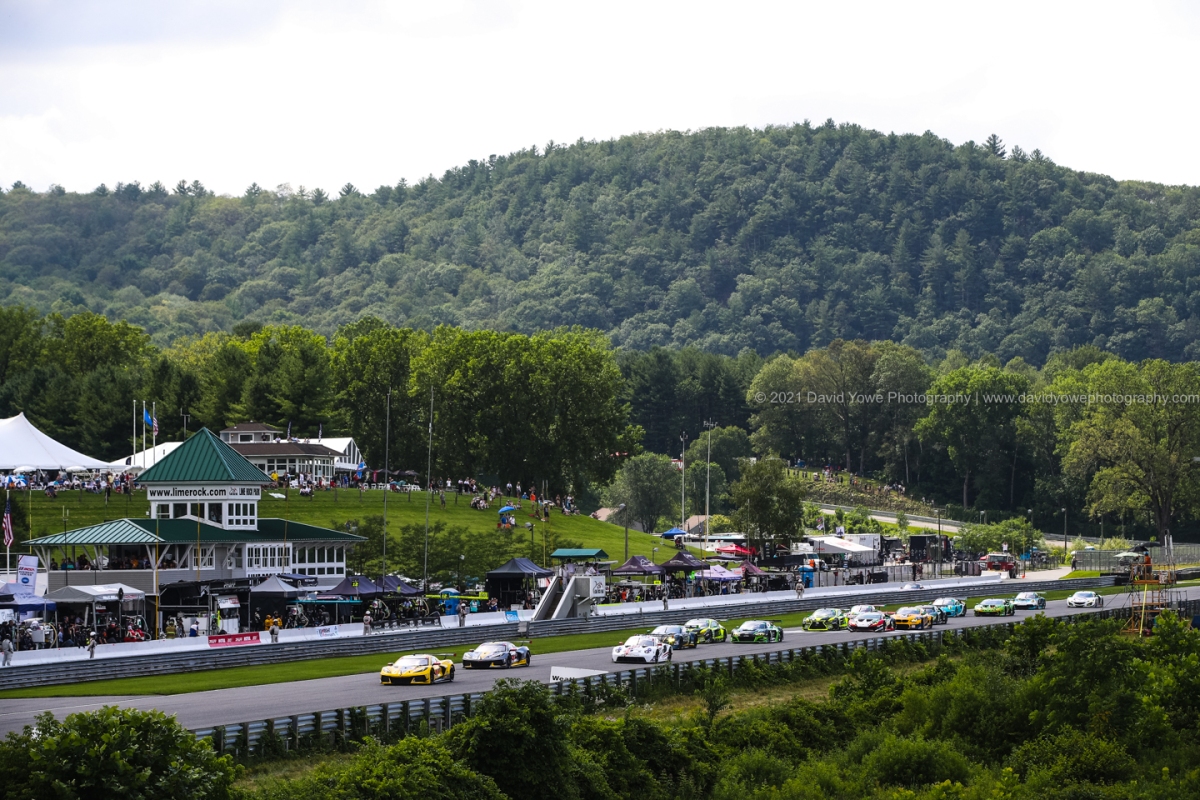 The WeatherTech Championship race was due to start at 3.00 pm, so headed back to the Outfield Spectator area for the start of the race. The #3 Corvette Racing Corvette C8.R leading the field of GTLM and GTD cars down Sam Posey Straight. 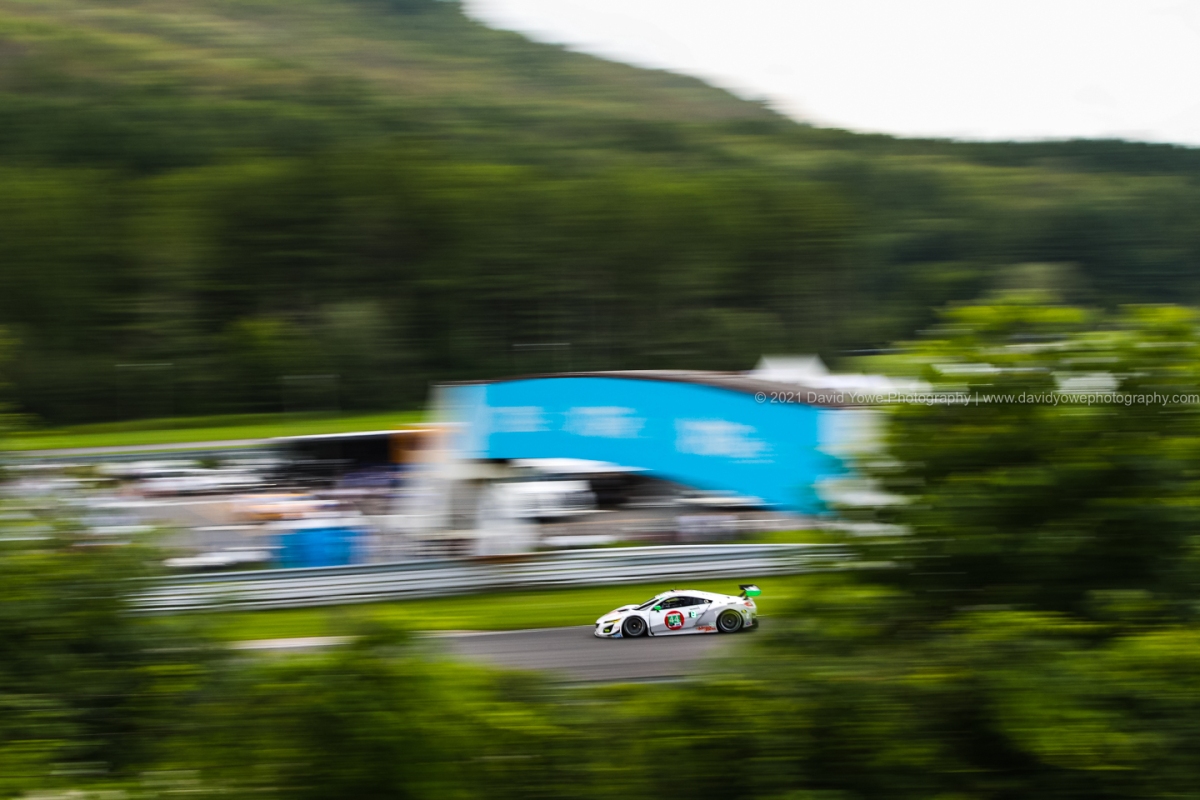 Under the pedestrian bridge with the #44 Magnus with Archangel Acura NSX GT3. 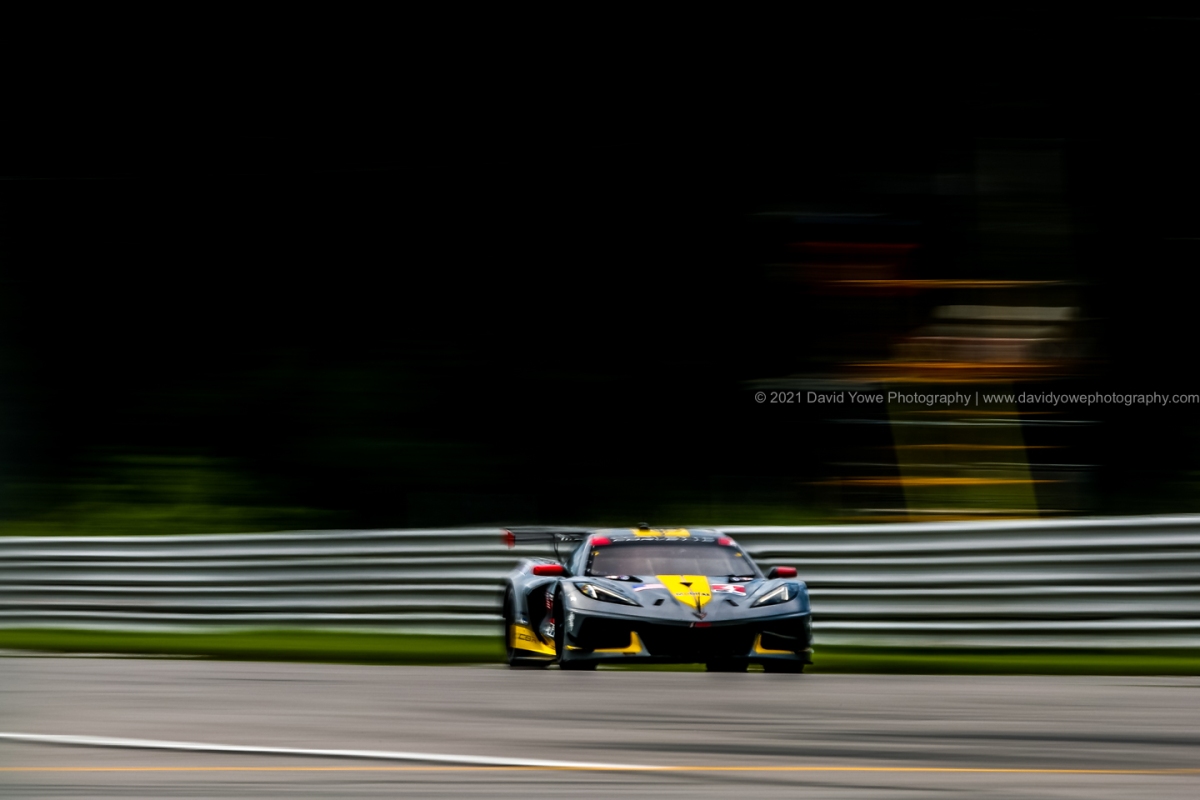 Headed back over the pedestrian bridge, then went under the bridge for shots of the cars speeding down Sam Posey Straight. The #4 Corvette Racing Corvette C8.R.

Then walked to my right for inside shots of the cars as they passed under the pedestrian bridge into Big Bend. The #79 WeatherTech Racing Porsche 911 RSR (top) and #66 Gradient Racing Acura NSX GT3 (bottom).

Continued walking in a clockwise direction along Big Bend, then to the Left-hander for rear shots of the cars with fans in the foreground at the Infield Spectator area. The #16 Wright Motorsports Porsche 911 GT3R (top) and the #3 Corvette Racing Corvette C8.R (bottom). The dark clouds would be an ominous warning of what was to come.

Another shot of the #3 Corvette Racing Corvette C8.R . 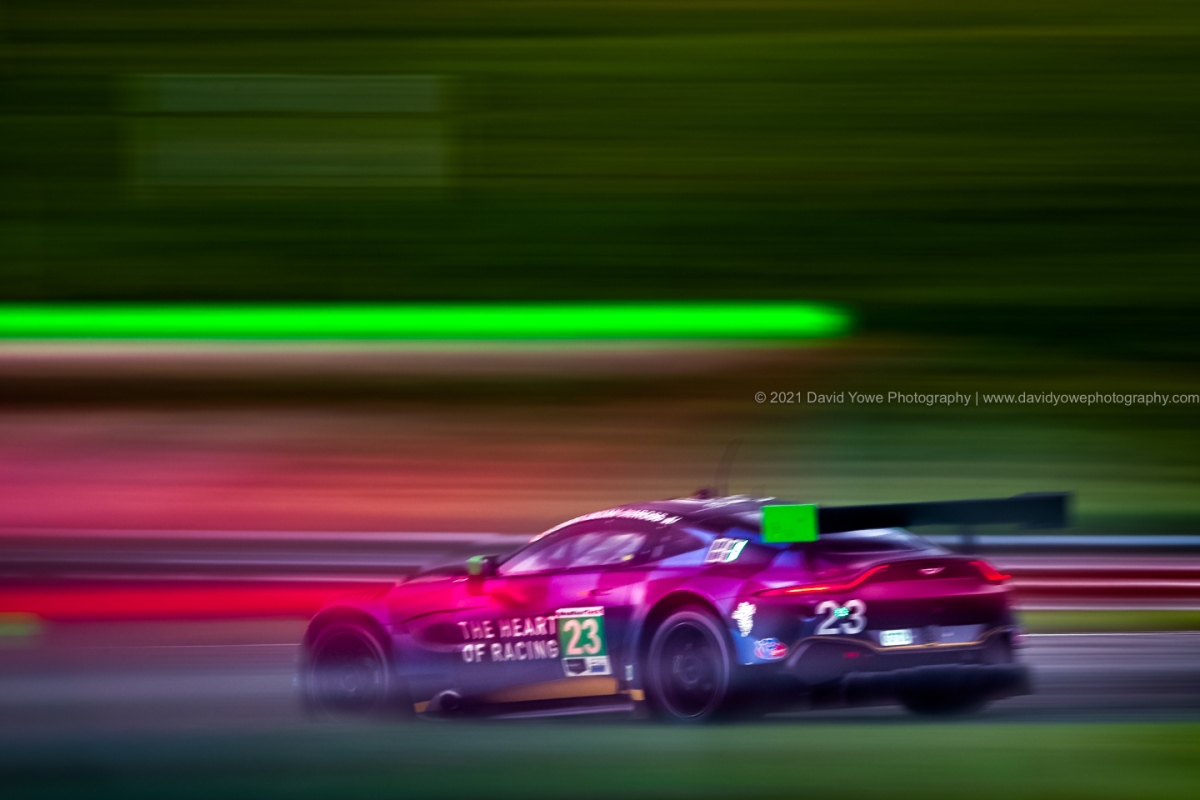 Always amazed at what can happen when you pan at a very slow shutter speed. This photo of the #23 Heart of Racing Team Aston Martin Vantage GT3 was taken at 1/10 sec. The foreground streaks of color are due to the lights from another car as the #23 moves behind it. Whilst, the background is the Infield Spectator hill. Hence, keeping the focus point on the #23 whilst its moving, keeps this car in focus and the foreground and background a blur of colors.

Continued walking along the straight into the Left-hander, then turned around for some front shots of the cars. The #96 Turner Motorsport BMW M6 GT3.

As mentioned, the dark clouds were an ominous sign, with the race red flagged after about 90 minutes of the 2 hour 40 minute race completed, for safety reasons due lightning. Despite a shortened race, it was great to see the GTLM and GTD cars on the track.

Thanks for spending your time reading this blog.