The ADAC 24h-Classic Rennen was one of the races that supported the ADAC Zurich 24h Rennen at the Nurburgring earlier this year. The field consisted of a variety of classic race cars made by Alfa Romeo, BMW, Ford, Mercedes-Benz, Opel, Porsche, and other manufacturers. Within each make of car there were several different models racing. There was a qualifying session on Friday and the 3 hour race was held on Saturday afternoon. The rain during qualifying made for some interesting driving and tested the skills of the drivers. Whats great about the classic cars is the amount of movement they have when racing on the track, especially going around corners at speed or navigating elevation changes. The classic cars “dance”, in contrast to modern race cars which look like they are “stuck” to the track. But I guess that’s “progress”?I’ll be posting several photo stories about the ADAC 24h-Classic Rennen, with each story focusing on a particular classic car or make of car. Qualifying was shot from Brunnchen, with the cars decelerating into the steep descent in the rain and under very wet track conditions. At times, water was flowing across the track and the water spray from leading cars made it very difficult for trailing car drivers to see. For the race we got dropped off at Brunnchen, then walked to several vantage points between Wippermann, Hohe Acht, and the Caracciola-Karussell. This part of the track is very good for watching the race, but is very difficult to photograph the track due to the high catch fencing, apart from a couple of cut-outs in the fence. It was only through the generosity of spectators in the Wipperman and Hohe Acht parts of the track who let me photograph from there “home-made” scaffold-stands, that enabled me to get shots of the cars over the catch fencing. Many thanks. At the Caracciola-Karussell there are a couple of cut-outs in the fence at the apex of the corner and either side of the corner, but these spots can be crowded. Also, the walk from Brunnchen to the Caracciola-Karussell is about 3.5 km each way, with a lot of elevation changes, and mud. So wear a good pair of walking/hiking shoes and take some food and water (at Brunnchen and Hohe Acht there are food and drink concession stands, and restrooms). The walk is worth it, with great views of the race track and the beautiful Eifel mountain scenery in the background. Also, met a lot of friendly race fans along the way, and was very interesting to see how elaborate some of the camping site set-ups were.

Today’s story will focus on the BMW M1. The BMW M1 (E26) was a sports car made between 1978 and 1981 (http://en.wikipedia.org/wiki/BMW_M1). The BMW M1 originated from an agreement between Lamborghini and BMW to build a production racing car in sufficient quantity for homologation. Currently, the BMW M1 is the only mid-engined BMW, and is powered by a twin-cam and fuel-injected M88/1 3.5L 6 cylinder gasoline engine. The street version of the engine produced about 273 hp with a top speed of about 162 mph, whilst the turbo-charged racing versions produced about 850 hp. 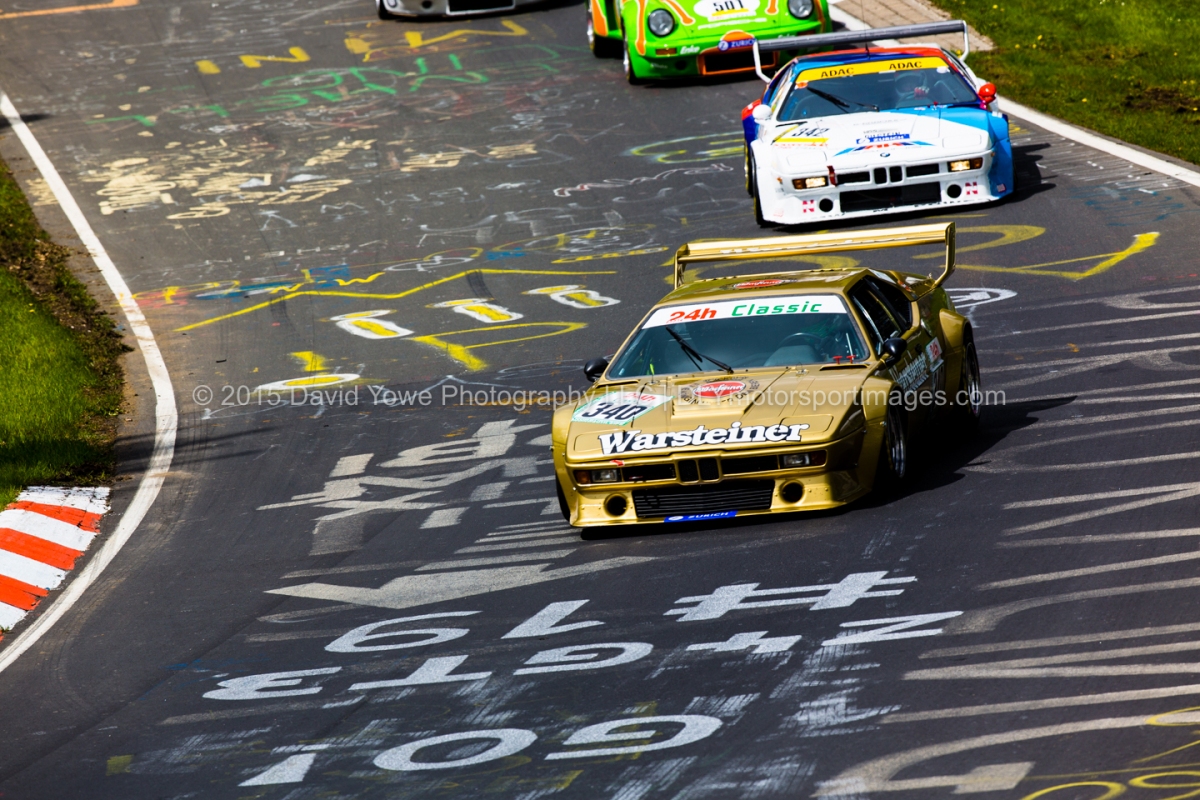