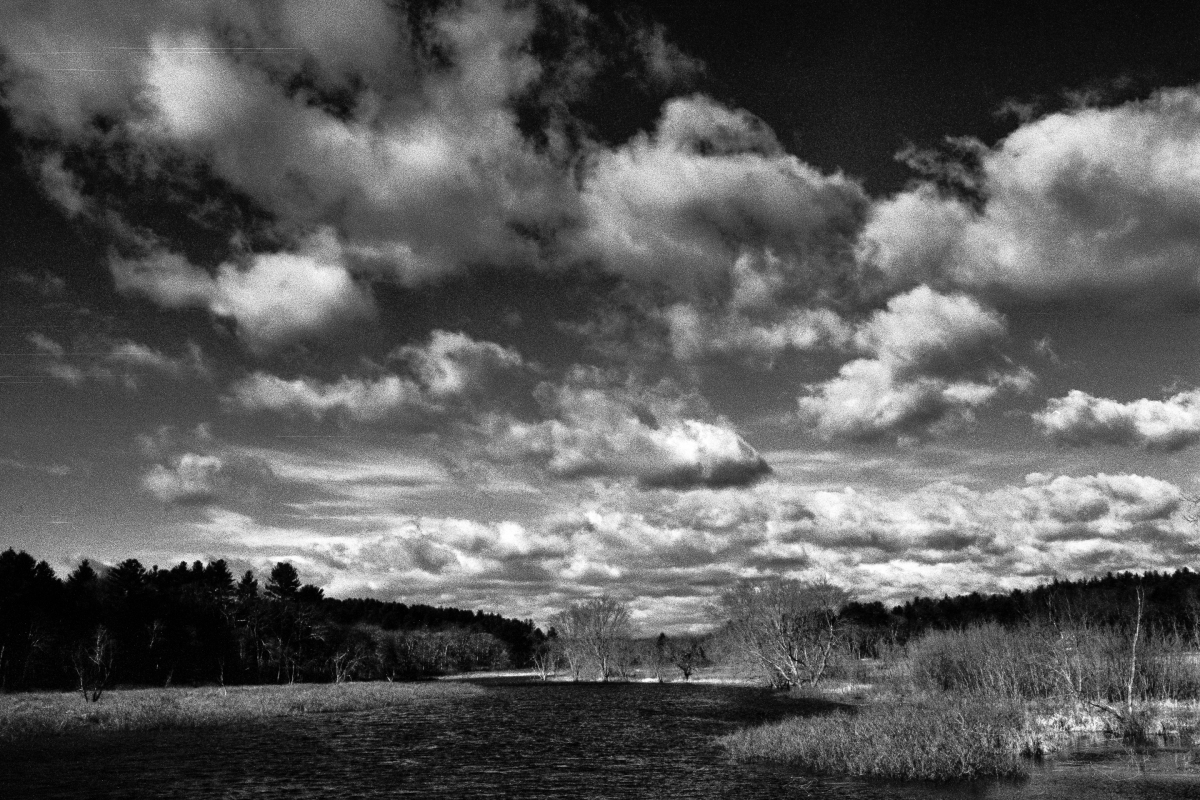 The Concord River is a tributary of the Merrimack River situated about 15 miles North West of Boston. Native Americans called it the Musketaquid, since its banks are lined with wild grasses and its placid waters contain much semi-aquatic and aquatic plants. A couple of weeks ago I took a Sunday drive along this river from Route 126 in Sudbury to Great Meadows National Wildlife Refuge in Concord. Hope you like the photos.

For this photo shoot used a Canon EOS-IV, Canon 35mm f/1.4LII or 300mm f/2.8L IS II lens (with a 1.4x extender II and monopod), and Kodak T-Max 100 film. For the 35mm lens used a B+W red filter 090 to enhance the contrast of the scenes recorded on this black and white film. Brought the 300mm lens since the plan was to photograph birds at Great Meadows National Wildlife Refuge, but as you know, things don’t always go as plan as you will read below. 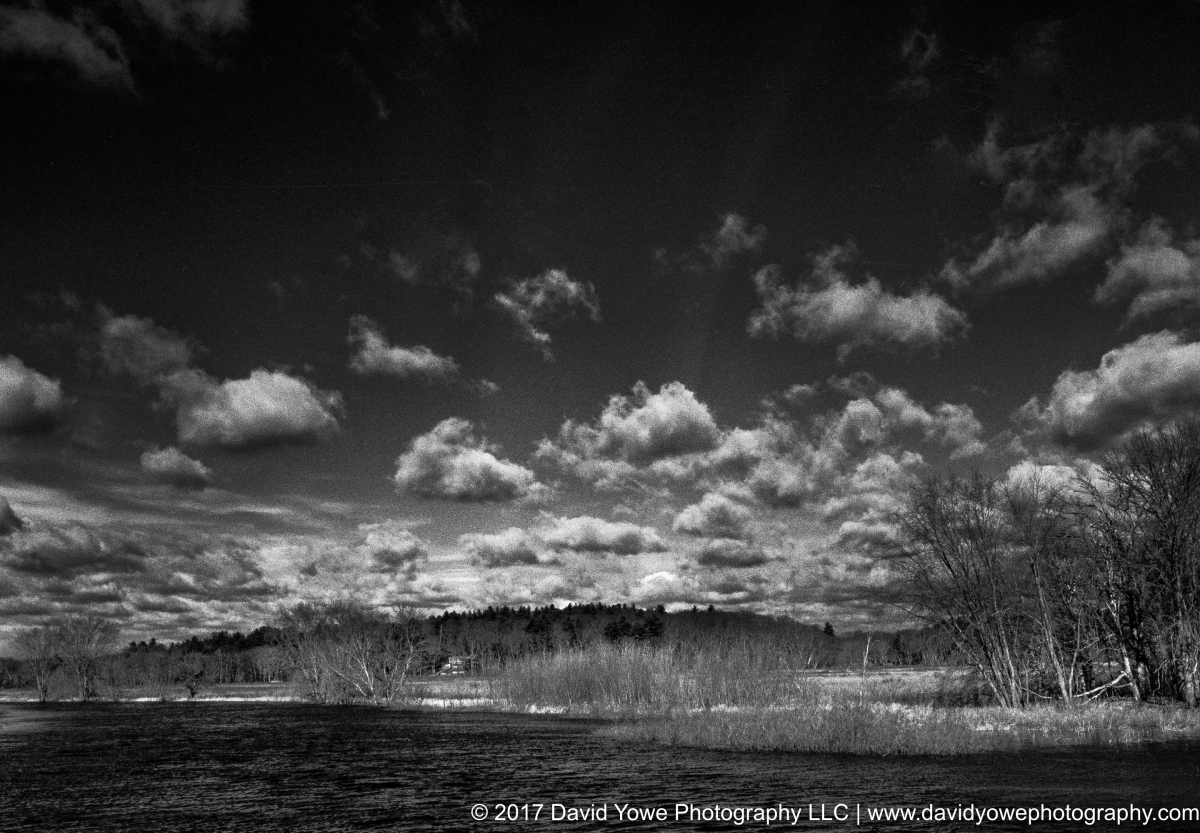 Started my drive at Sherman’s Bridge Road in Sudbury (forth dot along the blue line in the lower part of the map above). From either side of the bridge you get beautiful views of the Concord River. Really liked how the red filter darkened the blue sky against the white clouds, as well as the obvious film grain, adding character to the photo. 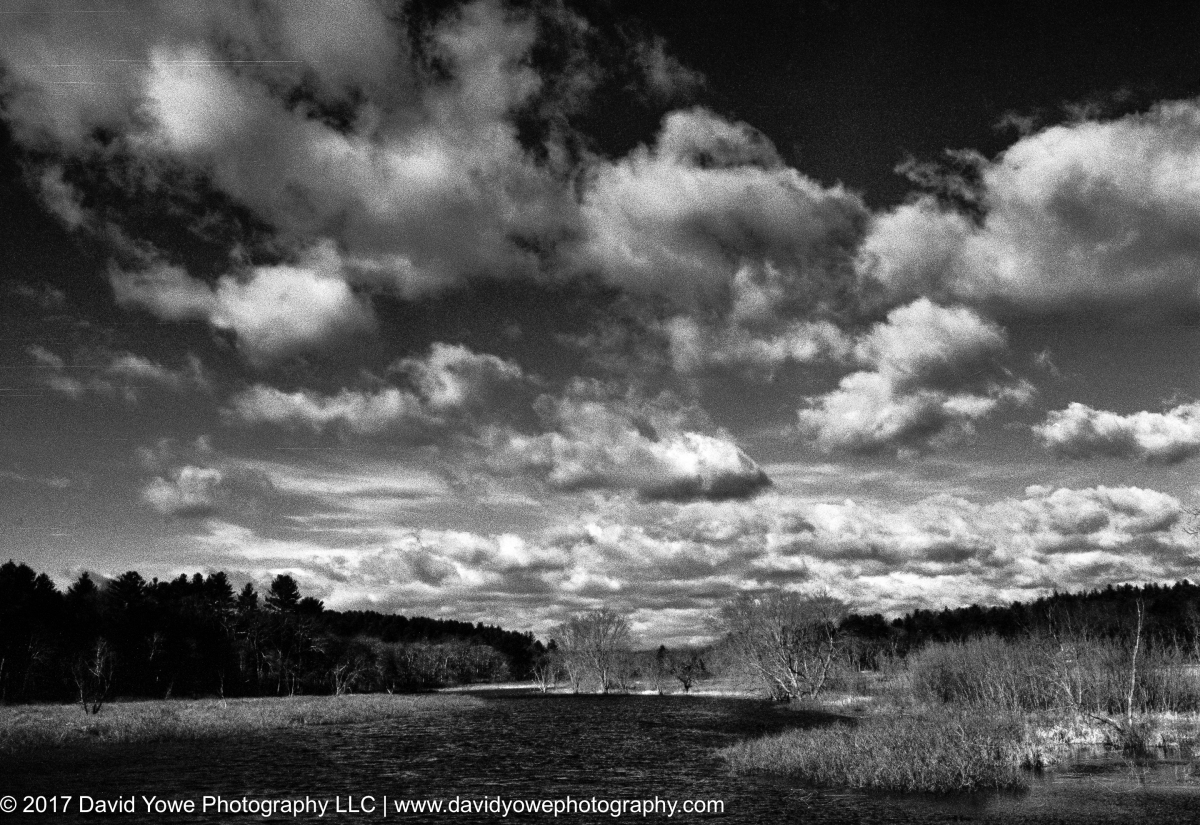 Here’s another shot of the Concord River with beautiful clouds overhead. The photo also shows the uncertainty of film with the scratches across parts of the photo. 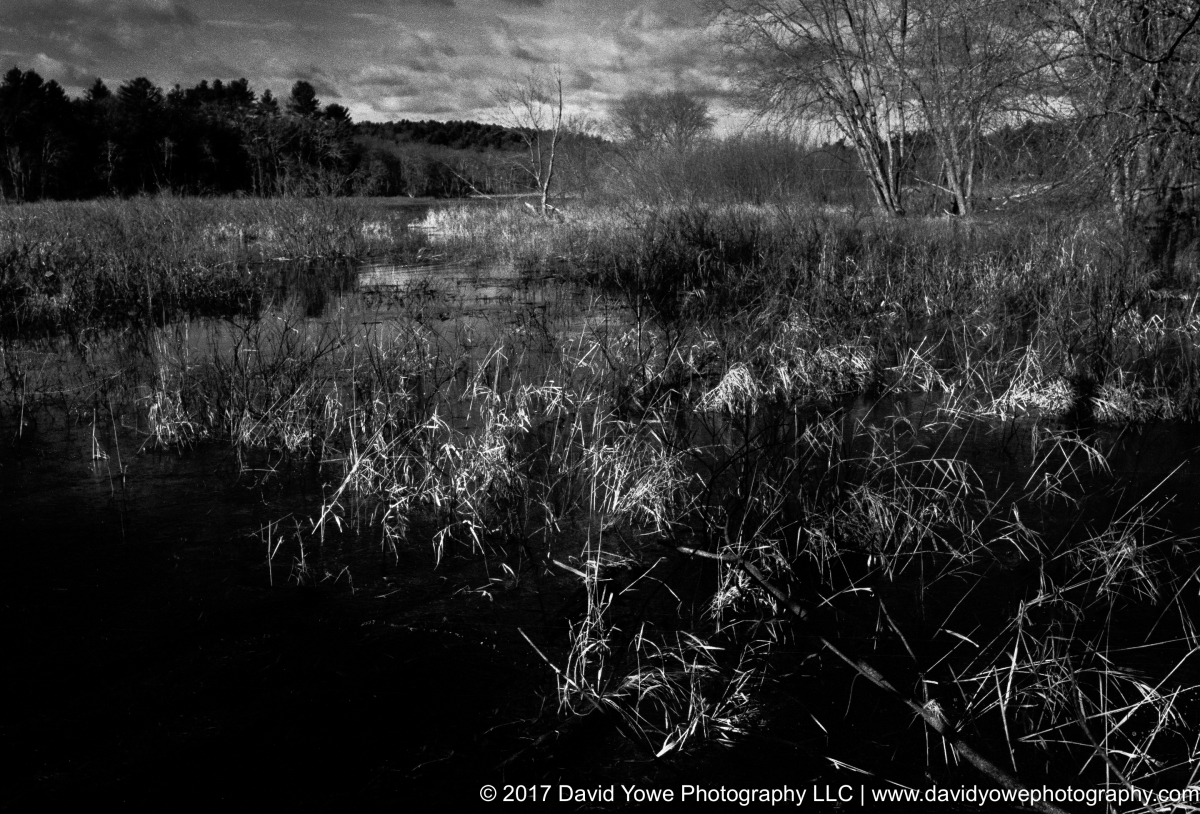 This photo illustrates the wild grasses that grow along the edges of the Concord River which provide shelter for many of the fishes that live in this waterway. Really liked how the morning light lit the top of the wild grasses. 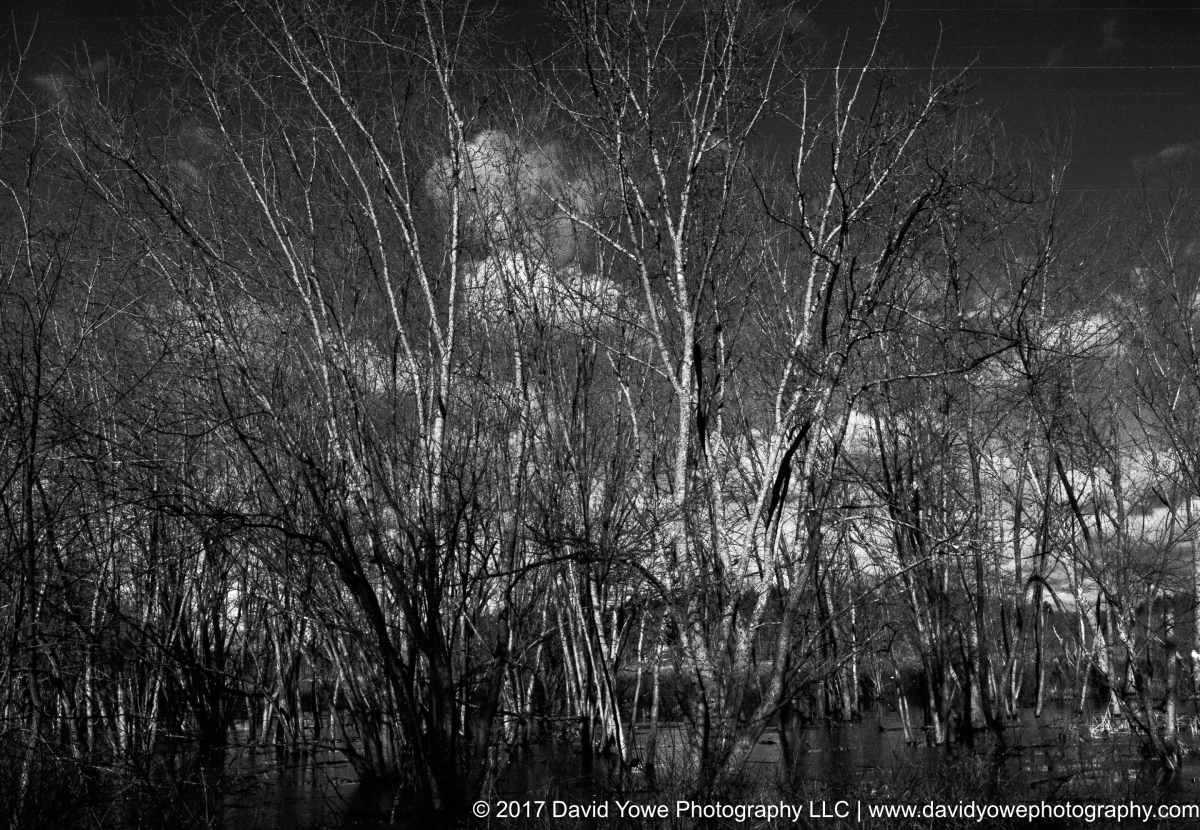 Walked over the bridge to the Lincoln Road side and saw some trees bathed in the morning light. 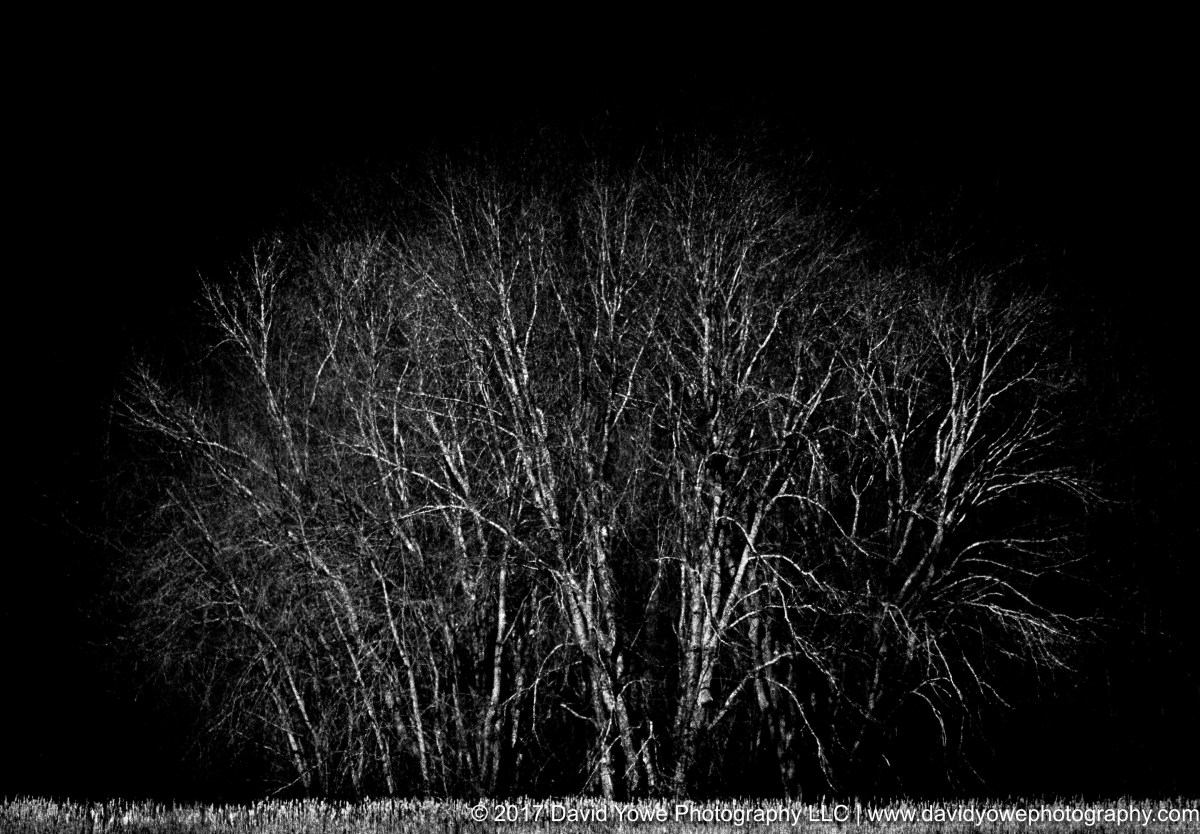 Hoped in the car and took Route 126 north to Route 2, then to Route 62 to the Concord part of Great Meadows National Wildlife Refuge. By the time I got the wildlife refuge the skies were very overcast, but still hoped to photograph some birds. It was very cold and I think the birds knew better than me, and sheltered from the cold weather.  However, with the wind, the clouds were moving quickly across the sky, and occasionally the clouds would clear, allowing sunlight to pass through. With the 300mm lens, was lucky to catch a patch of light which lit the trees and grass against a darkened background.

Had a great day photographing the Concord River area, which is one of my favorite places to visit. Will be back soon.