Apologies for not posting blogs earlier, but May was a busy month with back-to-back Indy Car events at the Indianapolis Motor Speedway (IMS) that culminated in the 100th running of the Indy 500. The next few blogs will reflect on these events. First up is the Angie’s List Grand Prix of Indianapolis, with Simon Pagenaud winning this event for the second time. Hope you like the photos.

The GP of Indianapolis is held two weeks before the Indy 500, and serves as the Indy Car opening event for the month of May at IMS. The cars run in a clockwise direction along a 14 turn road/oval course. The inaugural event in 2014 was won by Simon Pagenaud, with the following years race won by Will Power.

Practice 1 was held on Thursday morning under overcast skies. Covered this session from the outside of the Turn 6 to 7 straight (drivers left) near the Verizon walkover bridge. Thought it would be good to get a shot of Juan Pablo Montoya in the #2 Verizon Team Penske Chevrolet under the sponsors bridge.

Tried some”artsy” shots in black and white by incorporating the catch fencing into the photograph. Verizon Flyer (top) and Takuma Sato in the #14 ABC Supply AJ Foyt Racing Honda (bottom).

“Speeding out of frame” with Carlos Munoz in the #26 hhgregg Honda.

On my way back to the media center, walked through the IMS Mid-way and saw a “giant” Firehawk and met a fan with an incredible Indy Car tattoo.

The overcast skies got darker, with ominous storm clouds approaching the IMS for the afternoon practice session. 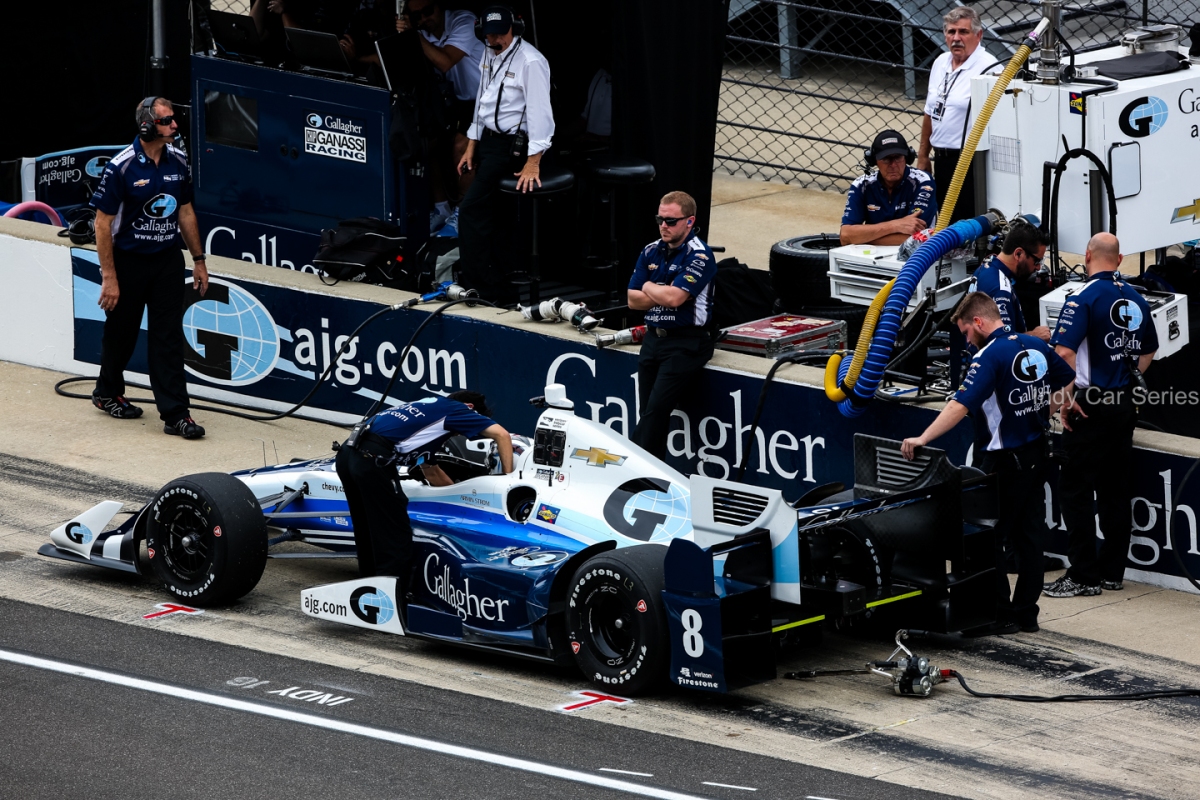 Drivers and teams getting ready for the practice session.

As the session started, I took a moment to take in the size of the Indianapolis Motor Speedway and the realization that this is the highest spectator capacity sporting venue in the world, and in a matter of weeks about 350,000 fans will be here for the Indy 500. I shook my head in amazement! 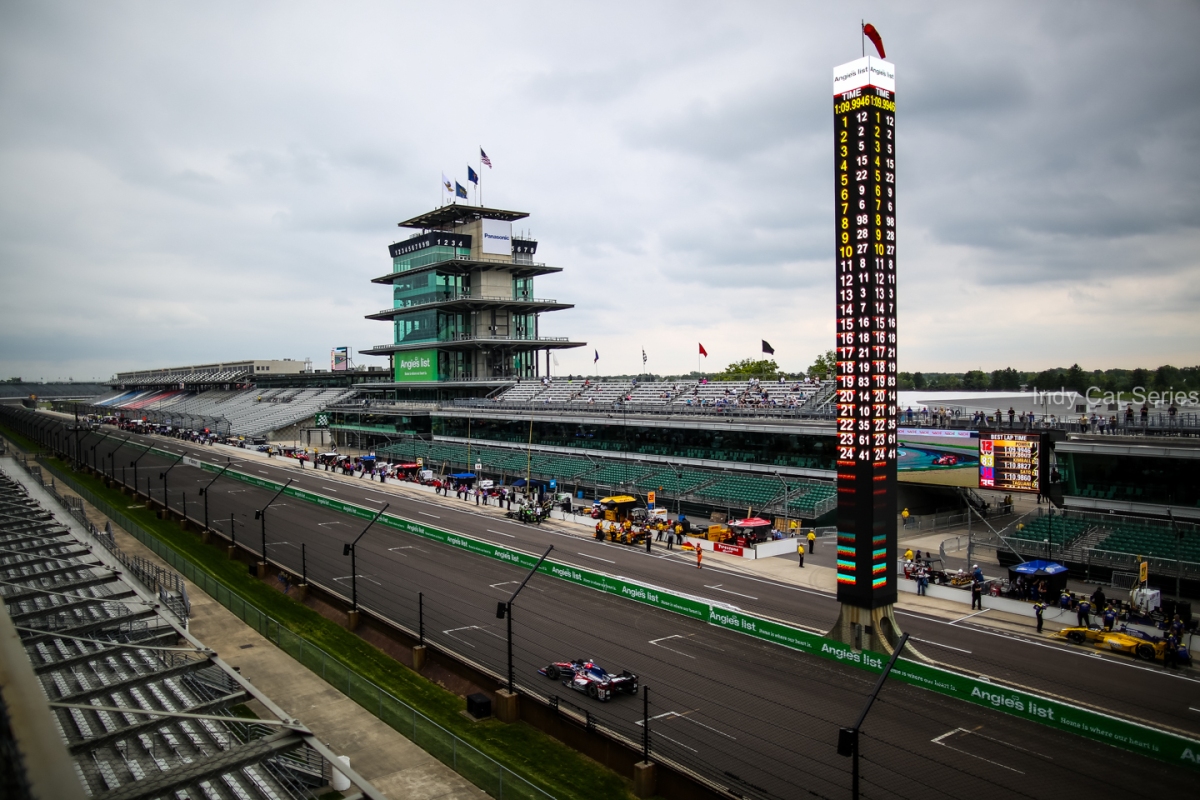 The bright lights on the timing board pole were really evident under the overcast skies.

“Abstract of speed” on the front straight with Mikhail Aleshin in the #7 SMP Racing Schmidt Peterson Honda.

For the qualifying session went to the top of the Pagoda to get a better idea of the size of the IMS. One can only imagine what it will be like to see the front straight grandstands filled with people for the Indy 500 in the coming weeks. 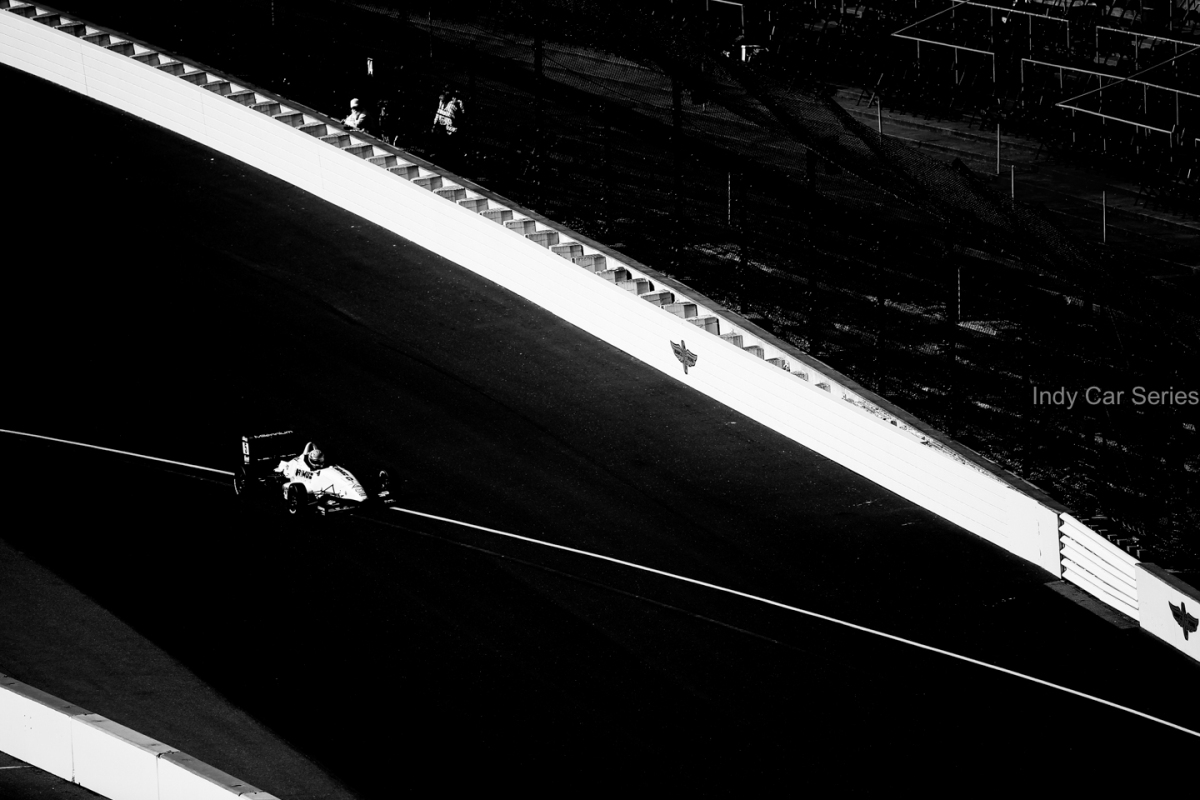 From the top of the Pagoda could see “converging white lines” as the cars exited Turn 14 into the front straight. 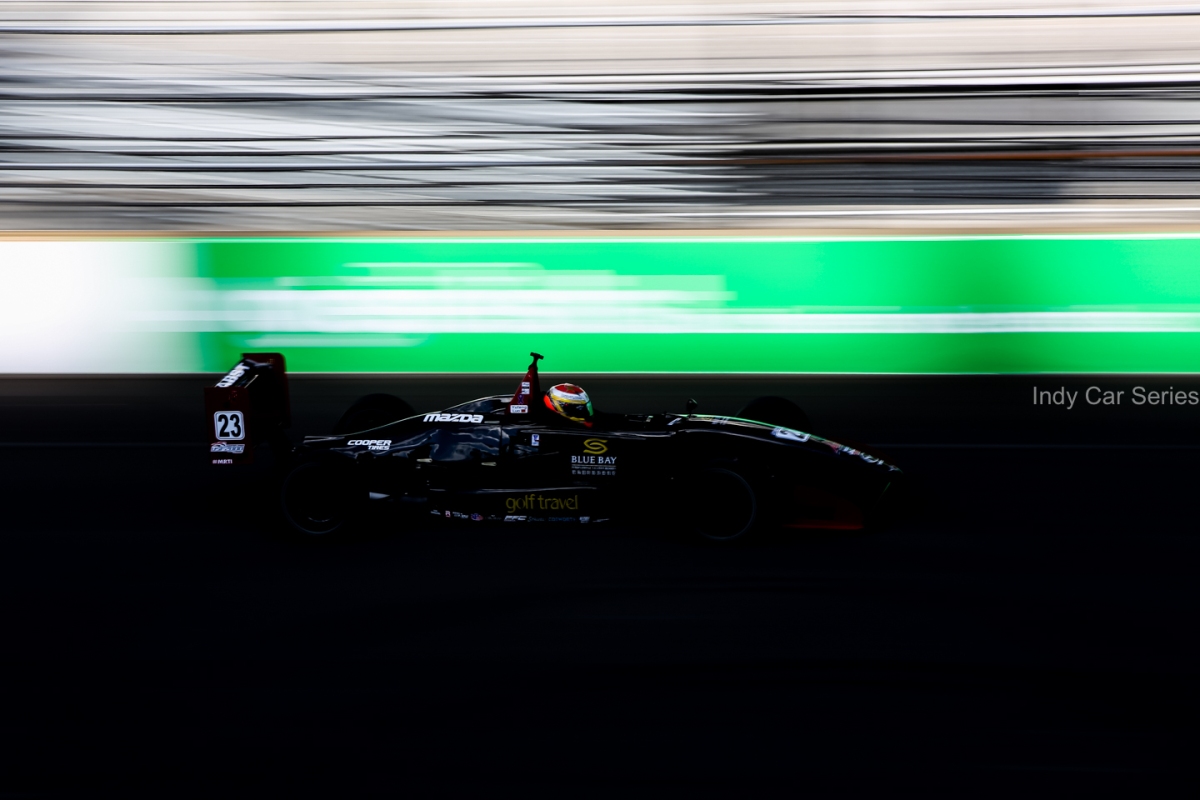 One of my favorite shots from the weekend is the #23 USF2000 speeding down the front straight silhouetted against the early morning sunlight.

Before the practice session started took a shot of the Pagoda under the beautiful morning blue sky. 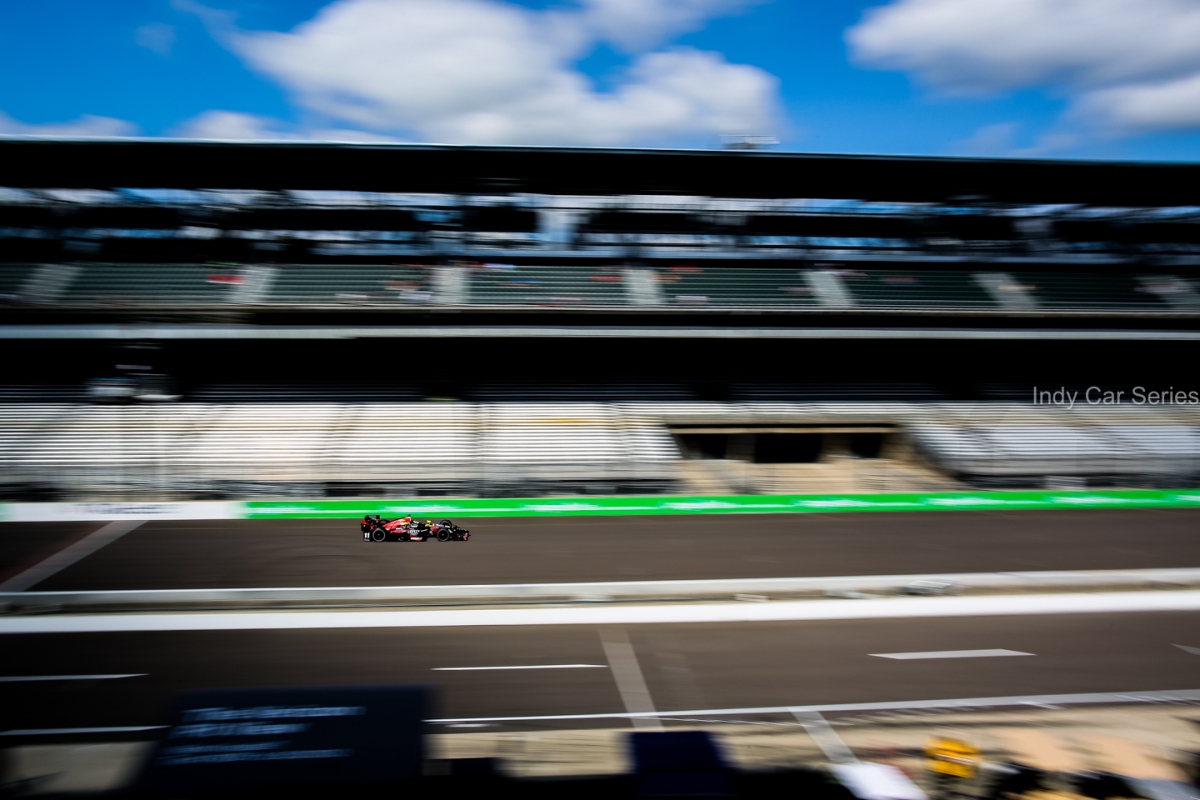 During the start of practice the cars sped through beautiful shadows and light on the front straight. Sebastien Bourdain in the #11 Team EUROPA – KVSH Racing Chevrolet.

The morning light really made the livery on the cars shine as they waited in the pits. Gabby Chaves in the #19 Boy Scouts of America Honda. 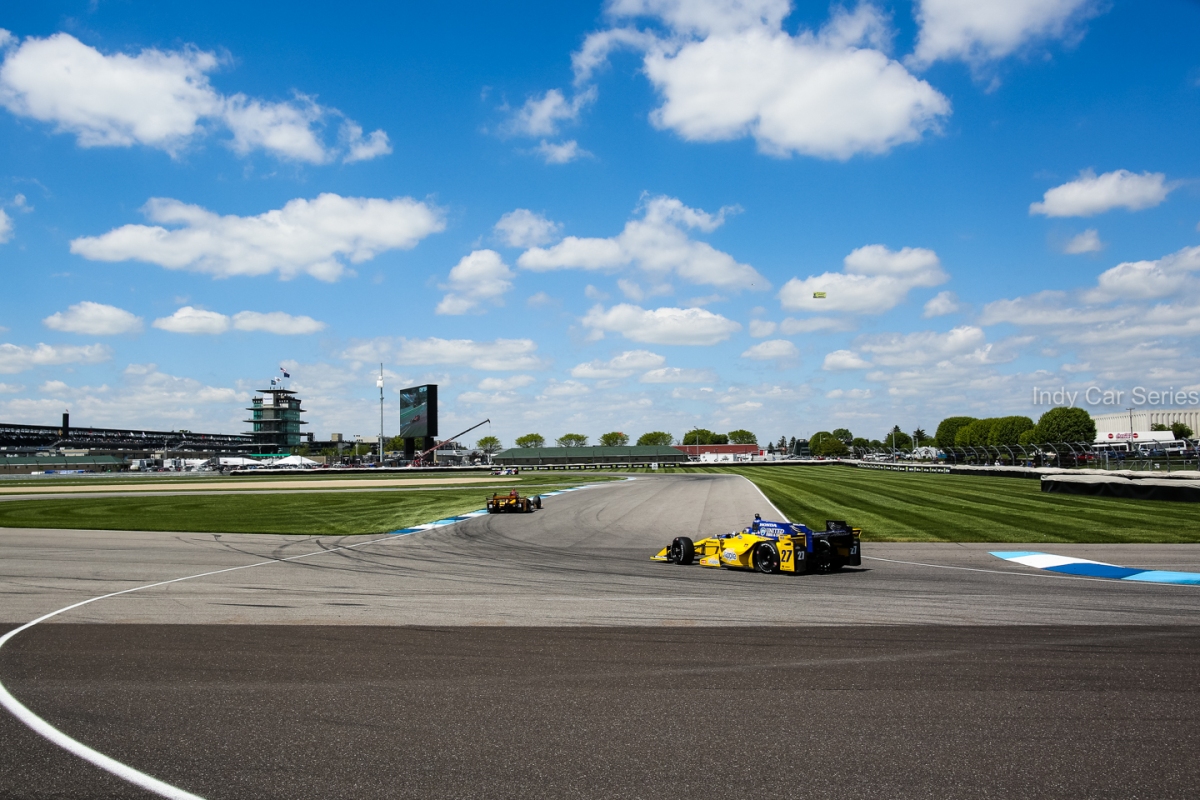 For the qualifying session headed over to the outside of Turn 12 so could get shots of the cars as they entered and exited this corner. “Post-card from IMS” with Marco Andretti in the #27 Snapple Honda.

“From shadows to light” with Juan Pablo Montoya in the #2 Verizon Team Penske.

At the end of the day went to the “Festival on Main”. This event took place on Main Street Speedway and proceeds benefit the Indy Family Foundation. The Festival featured live concerts, appearances by Indy Car drivers, KidZone activities, food trucks, a classic car show, craft beer gardens etc. Had a great time experiencing this event. 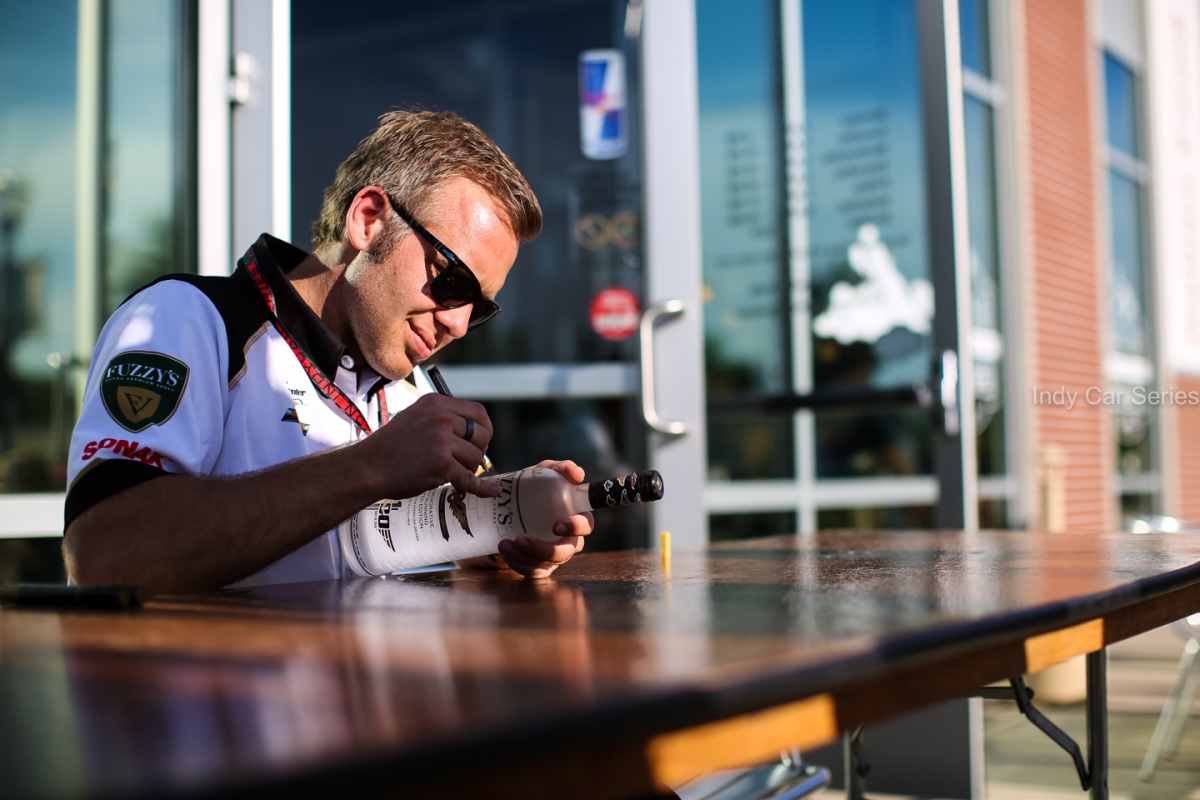 James Hinchcliffe was on hand to support the “Hinchcliffe Hundred Blood Drive”.

The KidZone was very popular with families.

Thanks “Festival on Main” for a great evening. 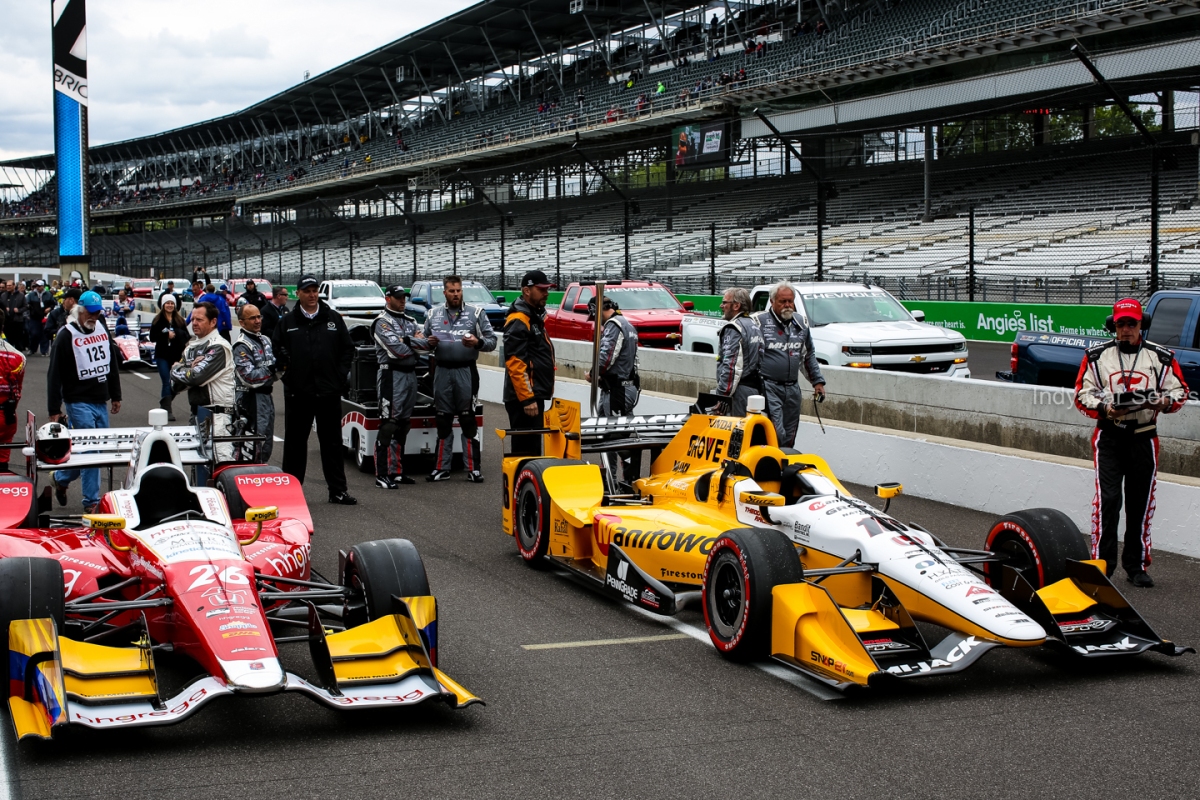 The crews started to roll the cars onto pit lane in preparation for the race. 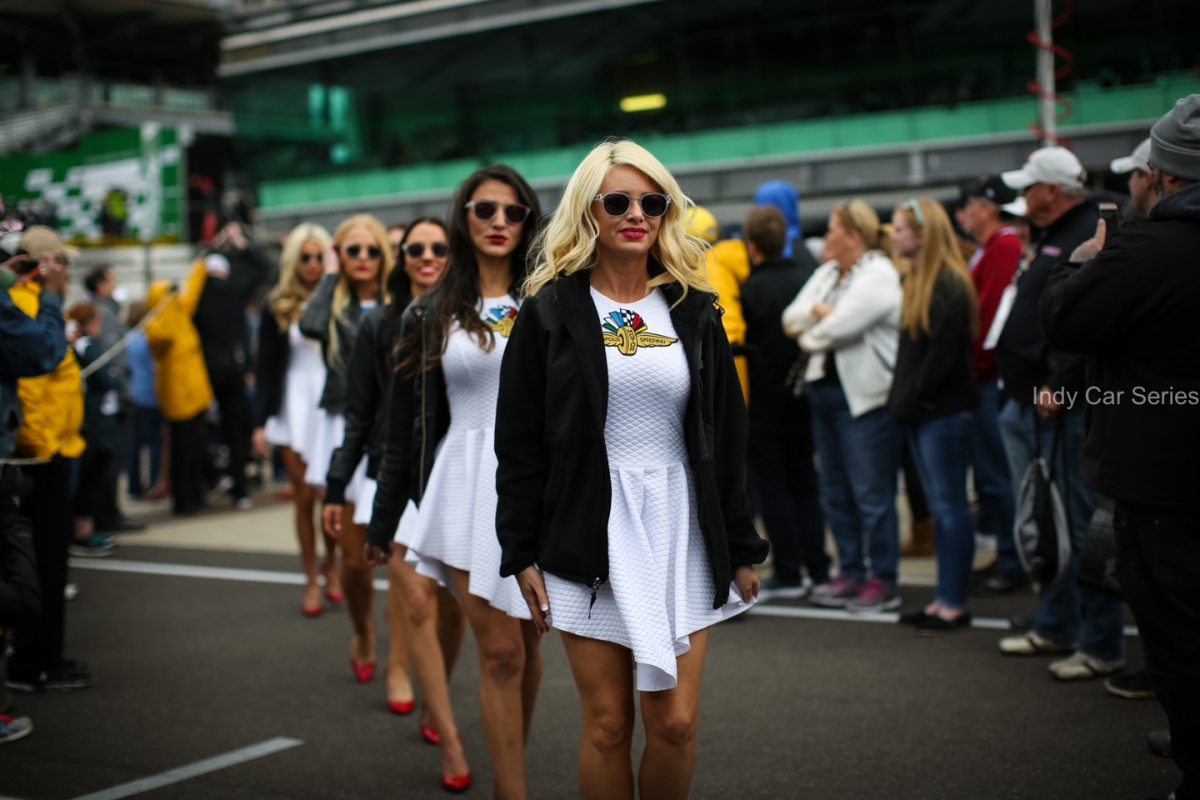 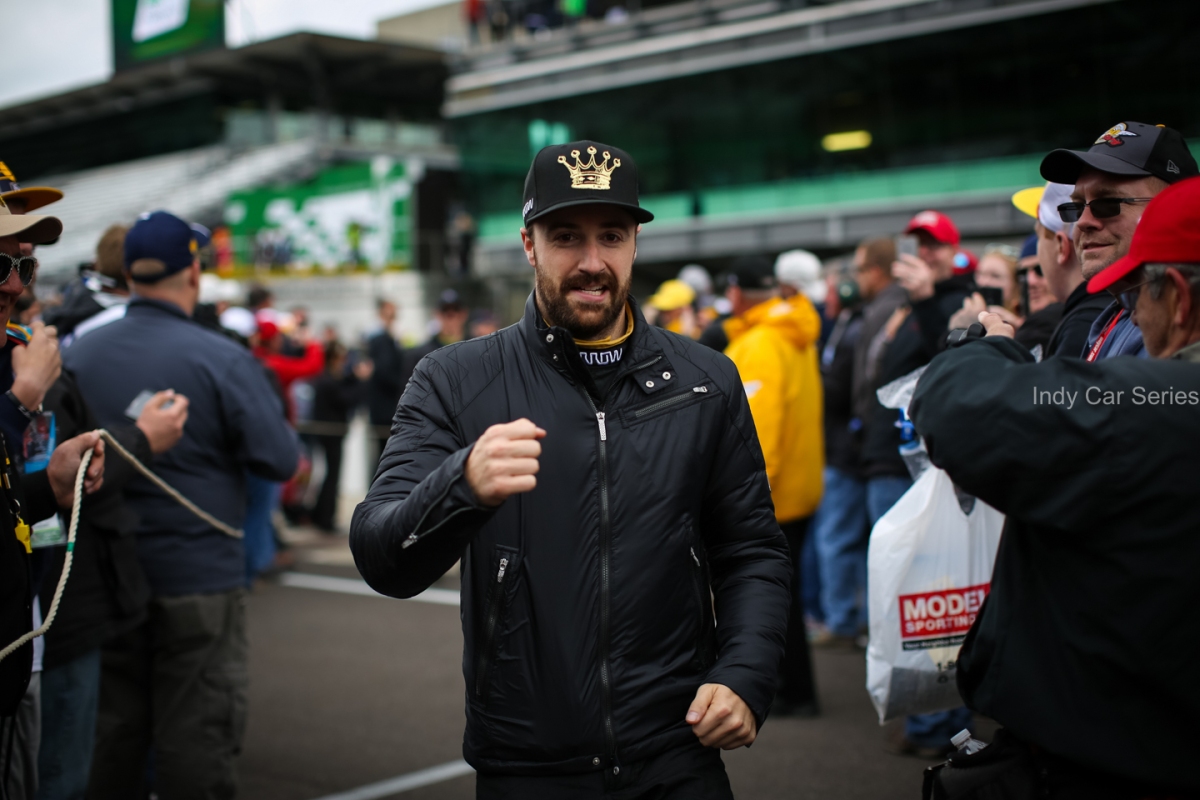 As the pre-race activities continued, the drivers were introduced one-by-one and they boarded the Chevrolet trucks for a parade lap. IMS girls (top), James Hinchcliffe (middle), and Josef Newgarden (bottom). 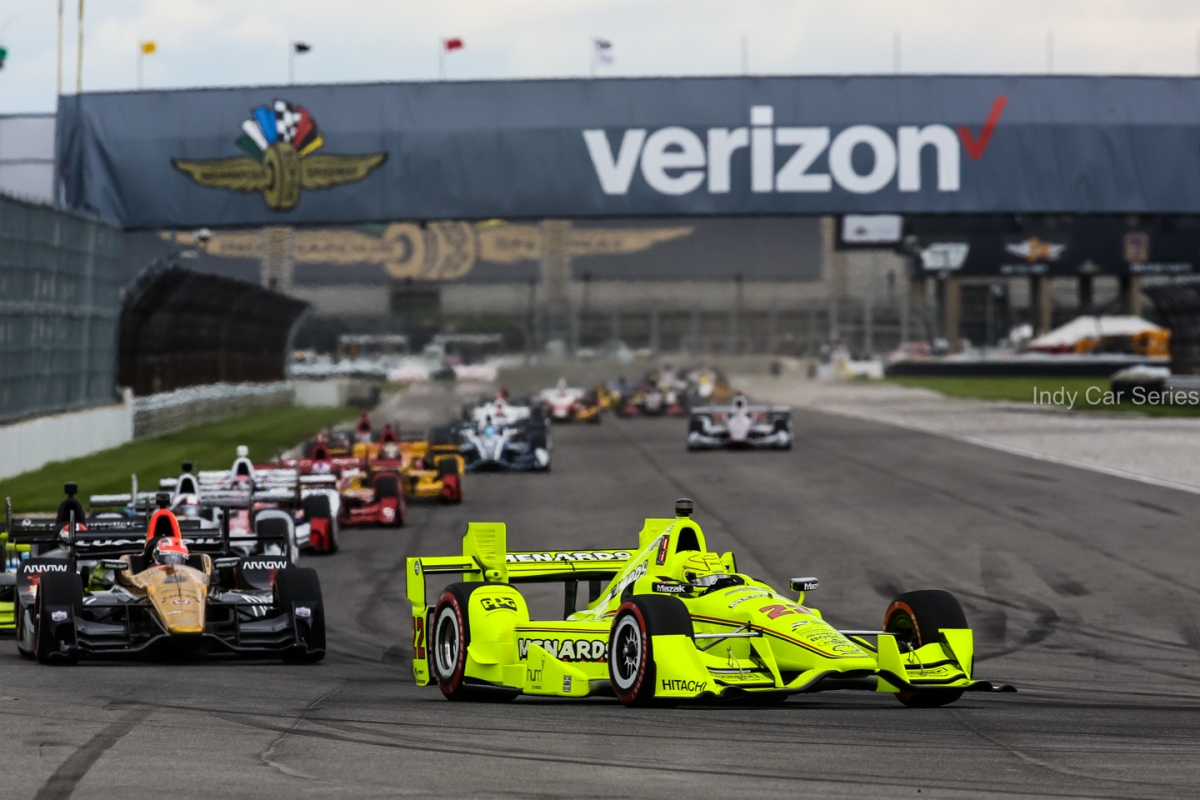 Pole-sitter Simon Pagenaud in the #22 Menards Team Penske Chevrolet leading the field in the opening lap through Turn 7. 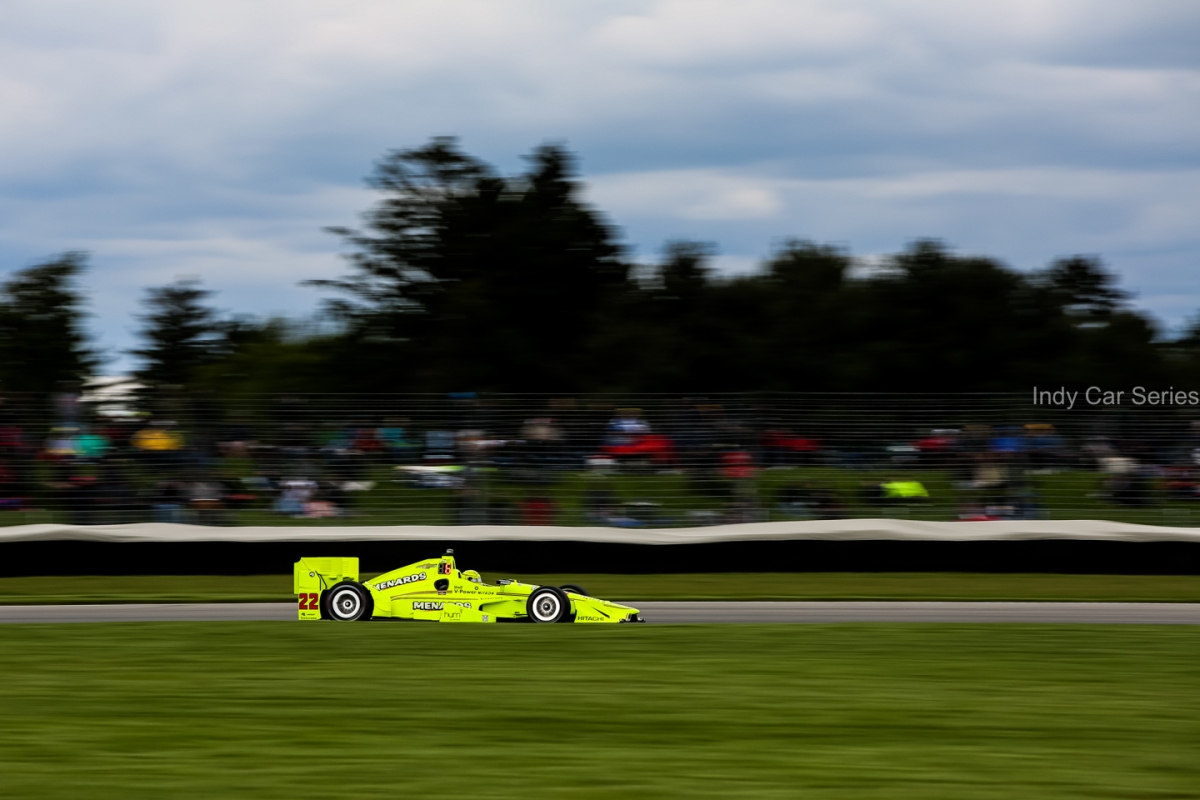 Simon Pagenaud in the #22 Menards Team Penske Chevrolet would go on to win his second Angie’s List GP of Indianapolis.

“Along the white line” with Alexander Rossi in the #98 Castol Edge/Curb Honda.

Mikhail Aleshin speeding through the Turn 7 to 8 straight in the #7 SMP Racing Schmidt Peterson Honda. 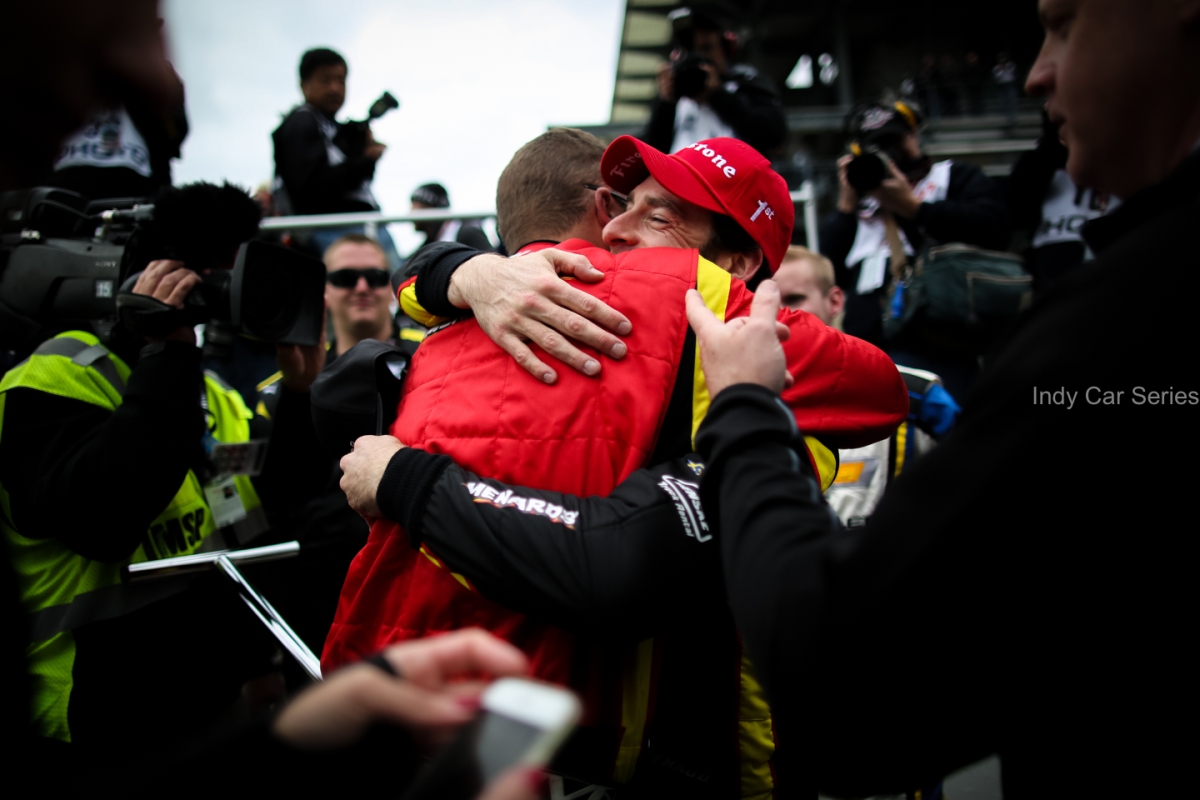 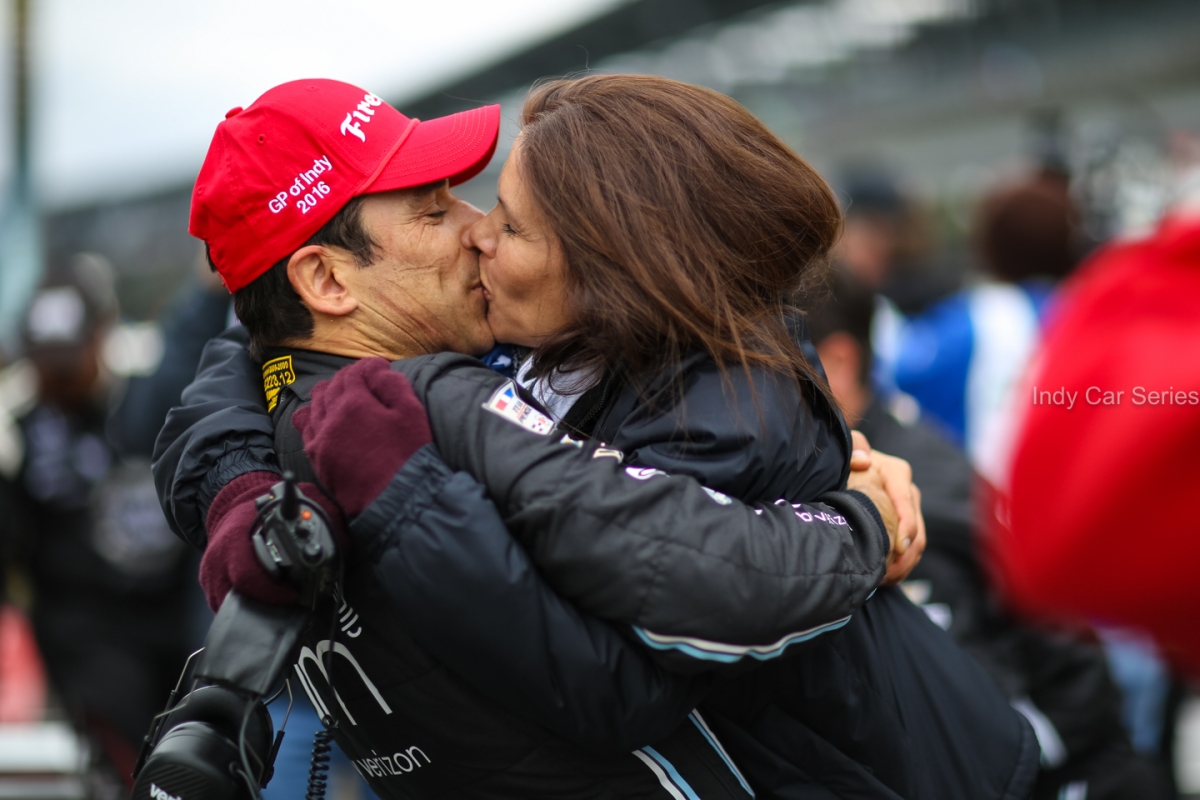 Fans and media ready for the podium celebrations.

Had a great time at the Indianapolis Motor Speedway. Many thanks to everyone for your help and support.