During the middle of October went for a drive to Mount Greylock, which is the highest peak in Massachusetts. At the summit of this 3500 foot mountain is the Massachusetts Veterans War Memorial Tower, which is the focus of this blog. Hope you like the photos.

Left Boston in the morning for the 2.5 hour drive along I-90 west to Mount Greylock. For this trip I took my standard landscape photography kit including a Canon 5DIV camera, Canon 24mm f/1.4L II lens, Lee filters, Really Right Stuff tripod, and a remote cable release.

When I arrived at the summit I was greeted by beautiful sunny blue skies to photograph the Massachusetts Veterans War Memorial Tower.  This 93 foot tower, which resembles a lighthouse, was built in the early 1930s as a memorial to the veterans of World War I and for subsequent conflicts. The goal of this photography assignment was to take different compositions of this tower which involved scouting the location for different angles, thinking about the changes in the light direction as the day progressed, and adding variety to the photographs by including different elements in the photo. 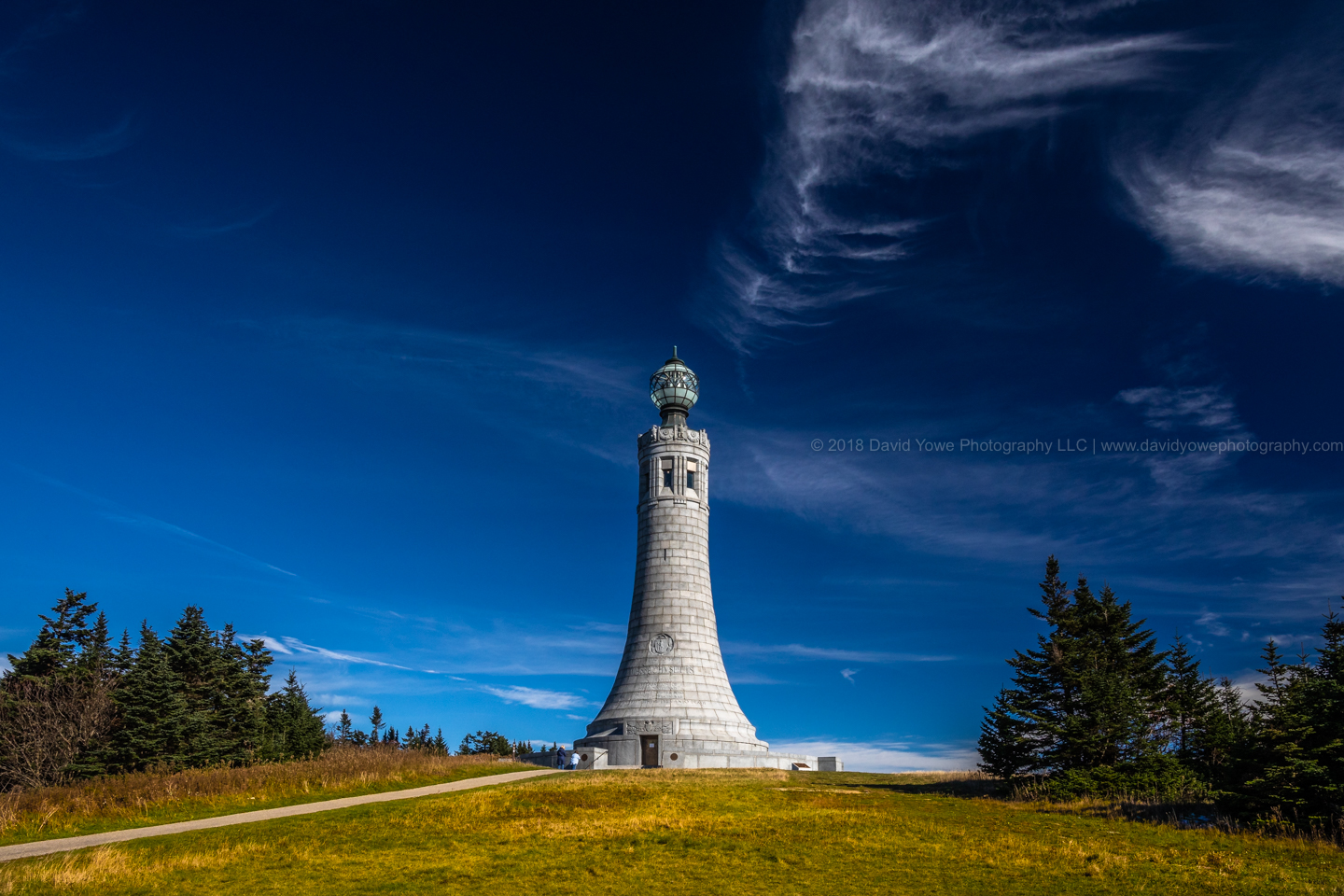 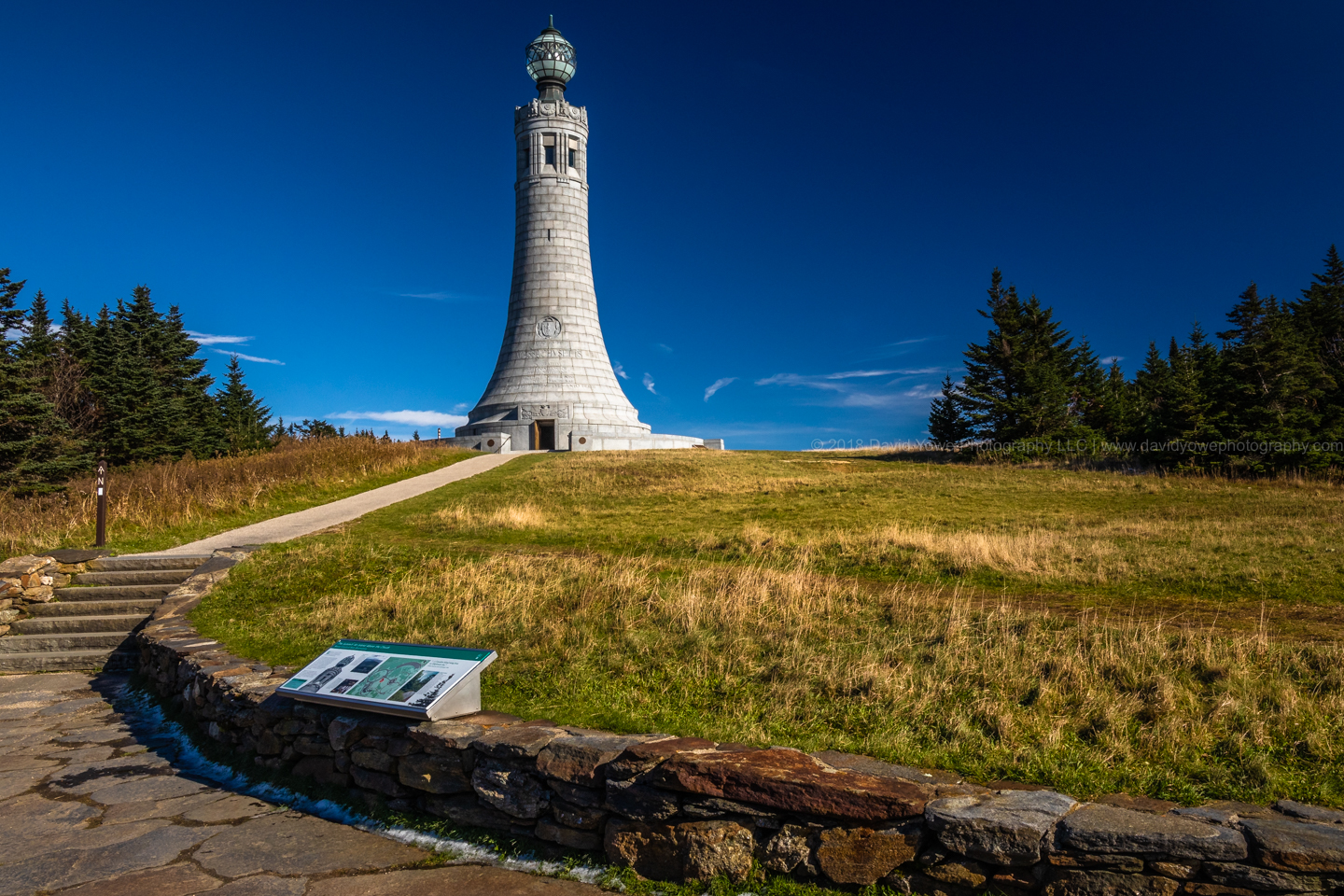 Walked to the front of the tower and used the pathway to its entrance as a “leading line” to take the viewer into the photo.

Walked back to my right and took several steps back so I could use the dark foreground bushes and the clouds above as interesting elements in the photo. Also, composed the photo so the tower was slightly off-center to emphasize the clouds coming in from the left of the photo.

As I continued my counter-clockwise walk around the tower as I followed the light, I came across this path. 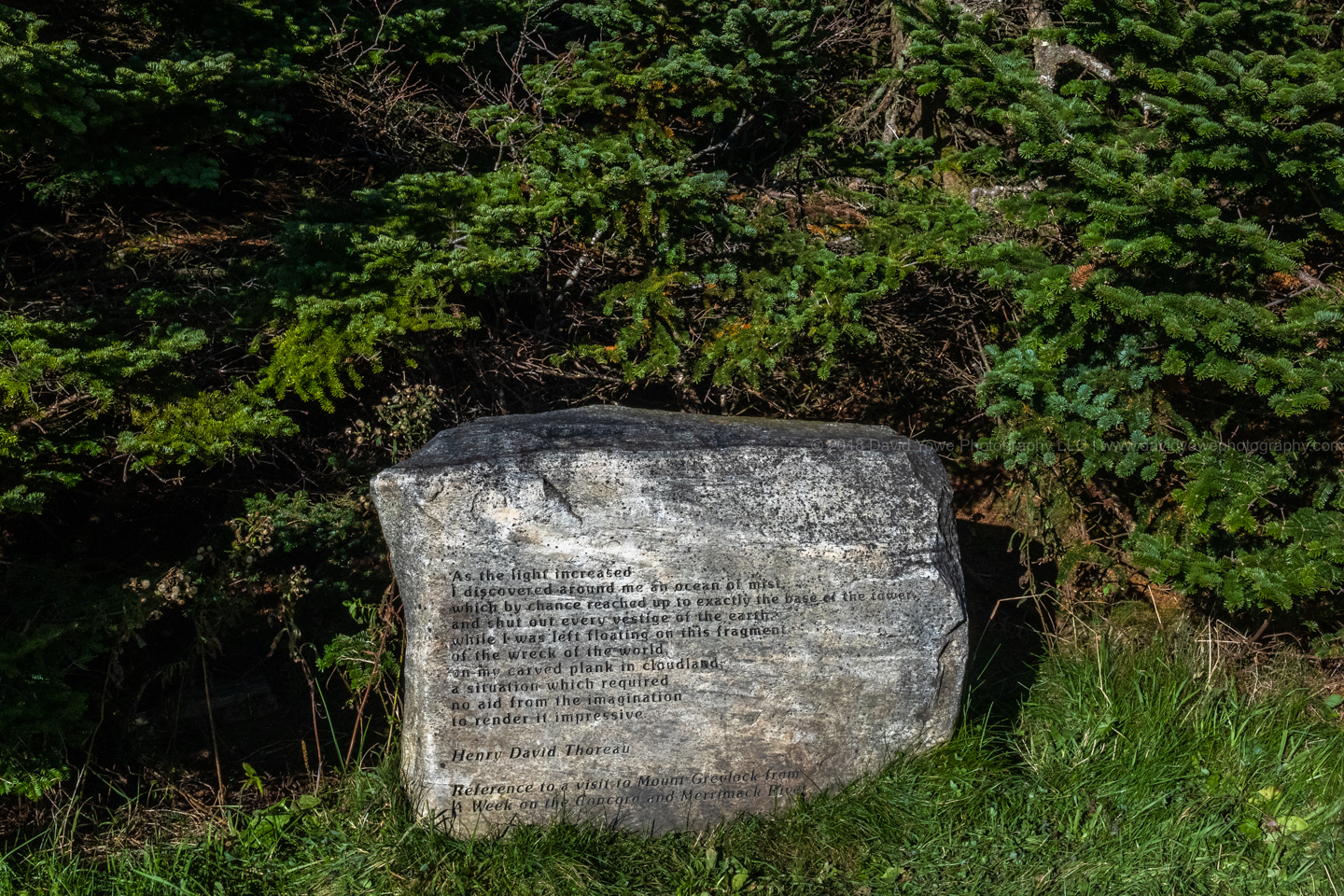 Along the path was this rock which was inscribed with a passage from Henry David Thoreau about “light”. 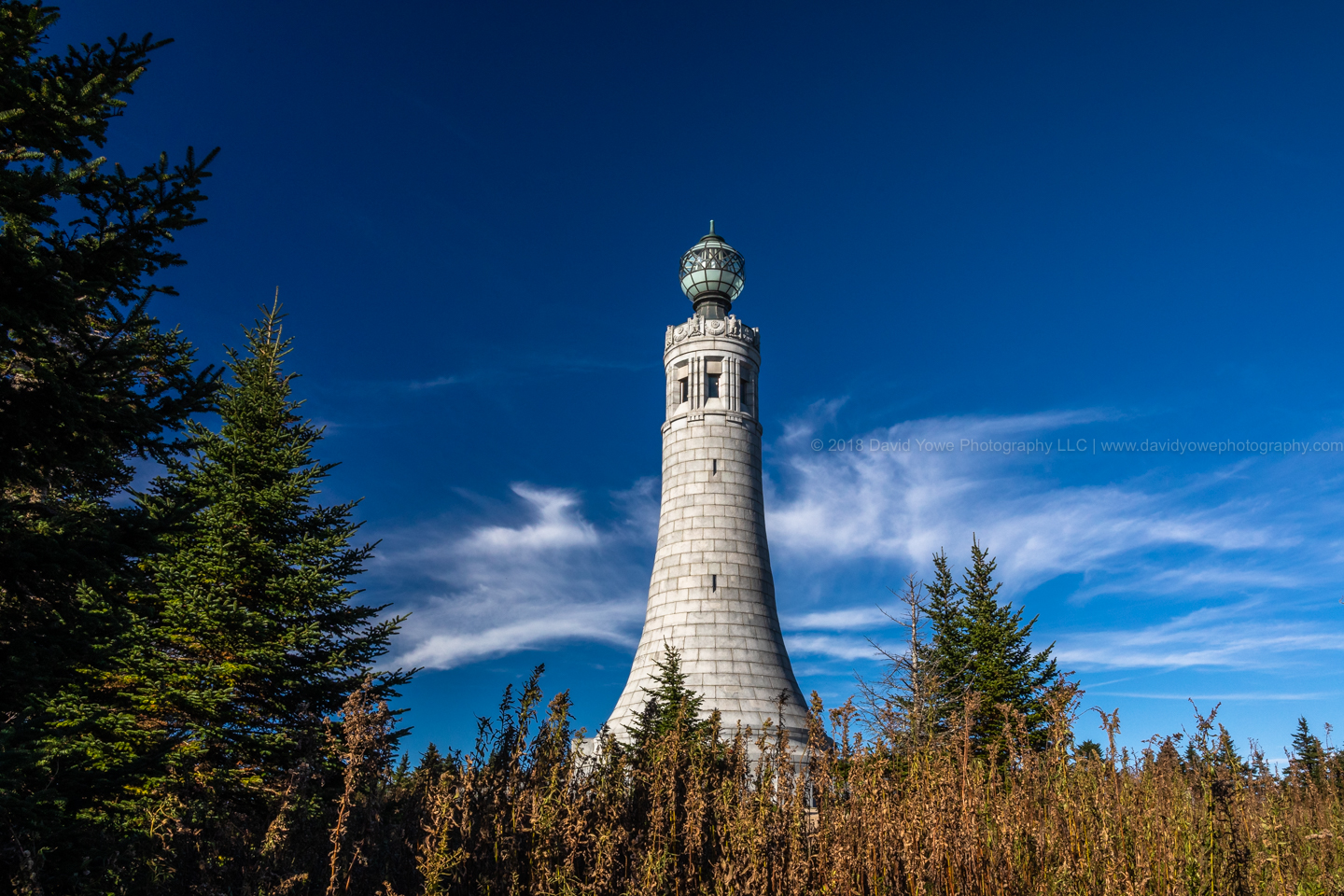 A view of the tower surrounded by trees and bushes.

From the rear of the tower their is a pathway which leads to the edge of the summit and a beautiful view of the valley below. 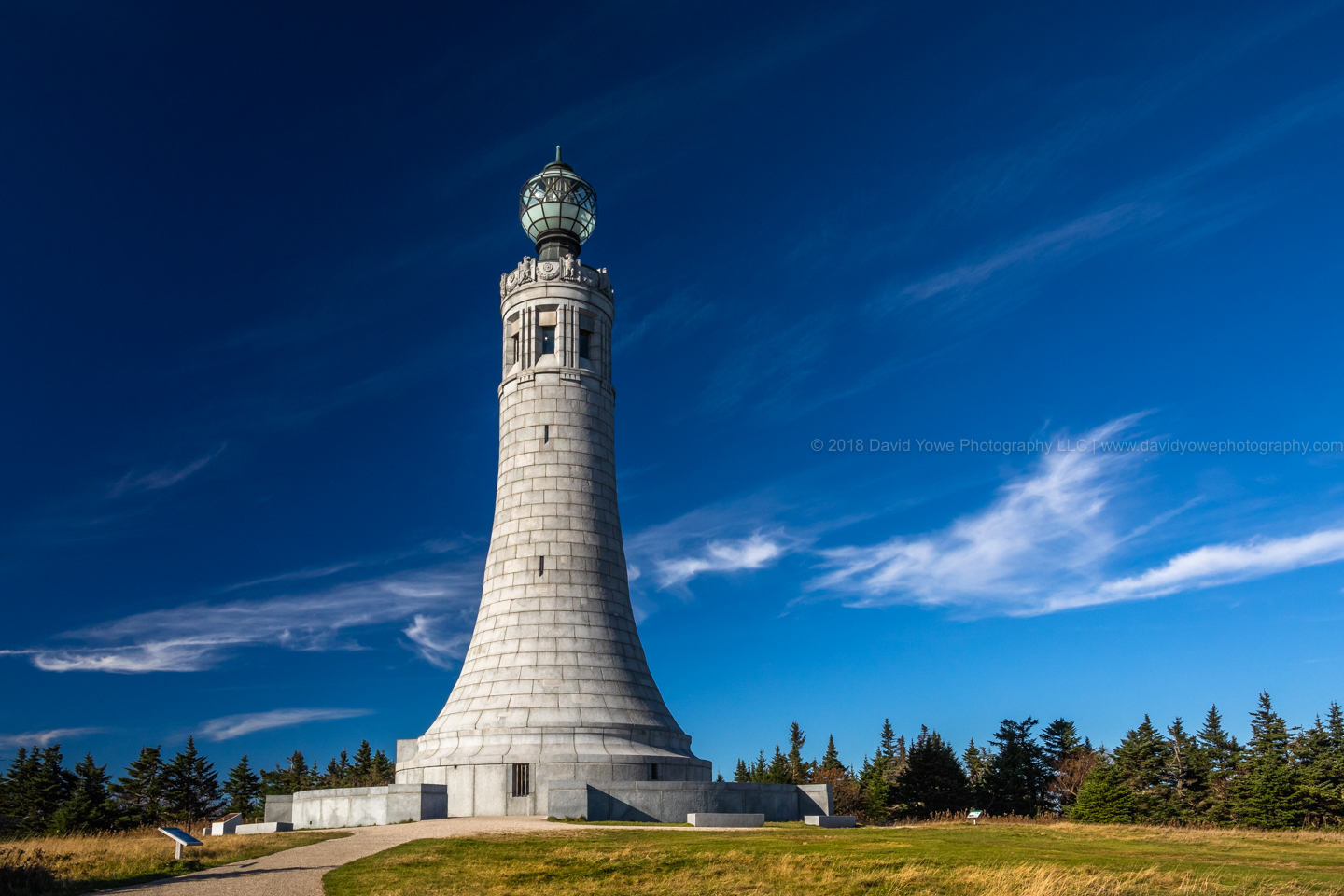 A rear view of the tower with beautiful white clouds above.

When I got to the lookout, I noticed you could carefully walk down the side of the summit for an elevated photo of the tower with the clouds appearing to radiate around it and the warm afternoon sunlight illuminating the rocks in the foreground. I think this was my favorite photo of the trip.

As the sun got lower the shadows naturally got longer across the hill behind the tower.

After the sun set, headed down the mountain and saw this beautiful twilight view with a full moon in the background. Had a great time photographing the summit of Mount Greylock. Thanks for spending your time reading the blog.