The motorsport off-season is a good time to reflect and to think about ways to improve your photographic skills.  I’m always trying to improve my ability to “see” and make the photo before taking it by pre-visualizing the shot. To get better at this, I practice seeing the photo before taking it and look at other photographers work for inspiration; ranging from motorsport, sport, street, portrait, landscape, architecture etc.

Simplifying the photographic process also helps me to improve my ability to “see”. Digital cameras have reached a point of technical sophistication where I think their are too many options, which can be distracting and get in the way of making the photo. All you really need to know is the aperture, shutter speed, and ISO. Off course, you can shoot digital cameras in manual mode and turn off the modern features to get back to the basics, but their is also the aspect of limitation. Overcoming limitations helps me become a better photographer, and this is where film photography comes in. Film cameras have many inherent technical limitations compared to digital cameras. However, the technical limitations of film cameras never got in the way of photographers to make great photos as exemplified by icons of photography including Adams, Alexander, Cartier-Bresson, Cahier, Lange, Leibovitz etc.

So a couple of months ago I looked into 35mm film SLR cameras. The last time I’d used a film camera was about 15 years ago, so had a lot of learning to do. During my research, I was surprised that Nikon still makes brand new F6 and FM10 film cameras. Even though I’m a Canon DSLR shooter and don’t have any Nikon lens, the F6 drew my attention with its list of modern features. But then I said to myself, “the point of me going back to film photography was to get back to the basics and to simplify!” So I went “back in time” and started to look at retro film cameras from the 1970s to 1980s. Started with Canon, since this is the brand most familiar to me. The Canon Camera Museum (http://global.canon/en/c-museum/series_search.html?t=camera&s=film) was a great resource, since it lists all of its cameras (and lens) in chronological order with photos, specifications, and other information. Narrowed my selection down to the following FD lens mount Canon cameras since they only use manual lens, due to their mechanical features (e.g. mechanical shutter, film advance lever, film rewinder etc.), and minimal use of electronics.

It soon became apparent that an F-1 series camera was what I should get due to its pro features (e.g. 1/2000th shutter speed, mechanical build etc.) and the match-needle exposure meter in the viewfinder which makes it easier to zone meter a scene. Also, I guess the F-1 name of the camera influenced me due to my motorsport photography interest. Selected the NEW F-1 since it incorporated the features of the F-1/F-1n and what Canon learnt during the 10 years that these cameras were on the market. Also, the NEW F-1 had a small hand grip incorporated into the battery cover on the front right-hand side of the camera and used a lithium battery. The F-1/F-1n used a mercury battery which are no longer available for safety reasons, although a replacement zinc-air battery could be used. The full specifications for the NEW F-1 are list here (http://global.canon/en/c-museum/product/film105.html). Before taking the plunge and getting a Canon NEW F-1, took a look at Nikon including the F, F2, and F3; which are all great cameras, but didn’t have the needle exposure meter in the viewfinder I prefer. 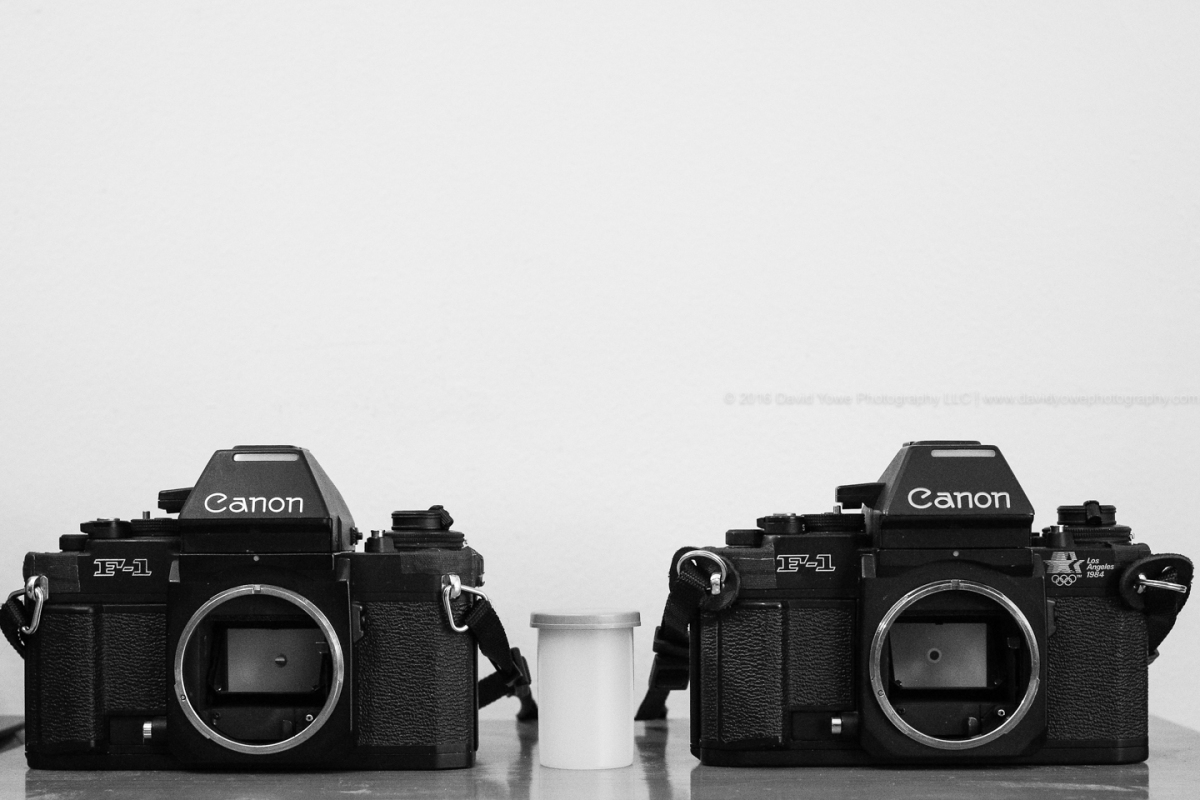 The Canon NEW F-1 standard and Los Angeles Olympics editions (photo taken with a Canon 5D Mark III and 40mm f/2.8 lens. I know, its ironic that I used a digital camera to take photos of film cameras for this story. LOL).

The Canon NEW F-1 next to the 5D Mark III for size comparison (photo taken with a Canon 5D Mark III and 40mm f/2.8 lens)

The next thing to do was to work out where to get a used Canon NEW F-1? After searching the internet; eBay, F Stop Cameras, KEH, and Roberts Cameras stood out since they all had a good range of Canon FD gear and showed photos of the actual products on sale (except for KEH). Also, KEH and Roberts Cameras offer a 6 month warranty. Prices for the New F-1 range from sub-$100 to a couple of thousand dollars for rare variants (e.g. 50th Anniversary Gold, olive painted body, mint in the box, accessories included). To put things into perspective, the NEW F-1 went on sale in late 1981 for a list price of about $1445 (149,000 yen). Managed to get a couple of used New F-1s in good and very good condition for $160 and $240, respectively. Both of these cameras have a center-weight spilt-prism focusing screen and an AE-prism finder for AE-exposure. The only difference between the cameras was that one had the gold colored Canon and Los Angeles 1984 insignia’s on the front of the camera since Canon was the official sponsor for these Olympic games. Having two camera bodies gives me the option to use different types of film at the same time. 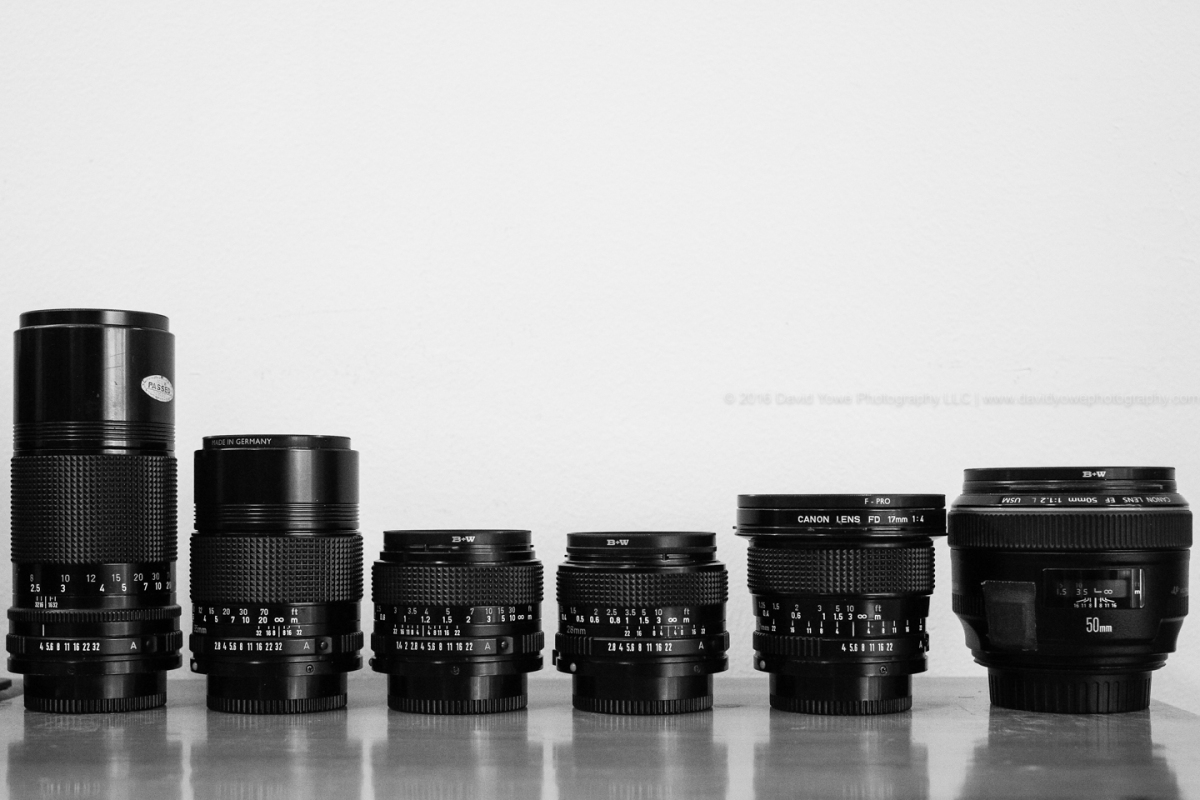 For lens, focussed on FD prime lens with apertures of f2.8 or f4 in the 20 to 200mm range since they are reasonably priced, light-weight, with the added bonus that they mostly used the same filter size of 52mm. After some research was able get prime lens that ranged from ultra-wide (17mm f/4 for $224), wide (28mm f/2.8 for $38), standard (50mm f/1.4 for $95), and medium telephoto (135mm f/2.8 for $50 and 200mm f/4 for $23). Importantly, all the lens are the later version of the FD mount which makes its easier to attached the lens to the camera body.  I listed the prices for the cameras and lens to illustrate how a two body film and five prime lens system can be assembled for several hundred dollars. 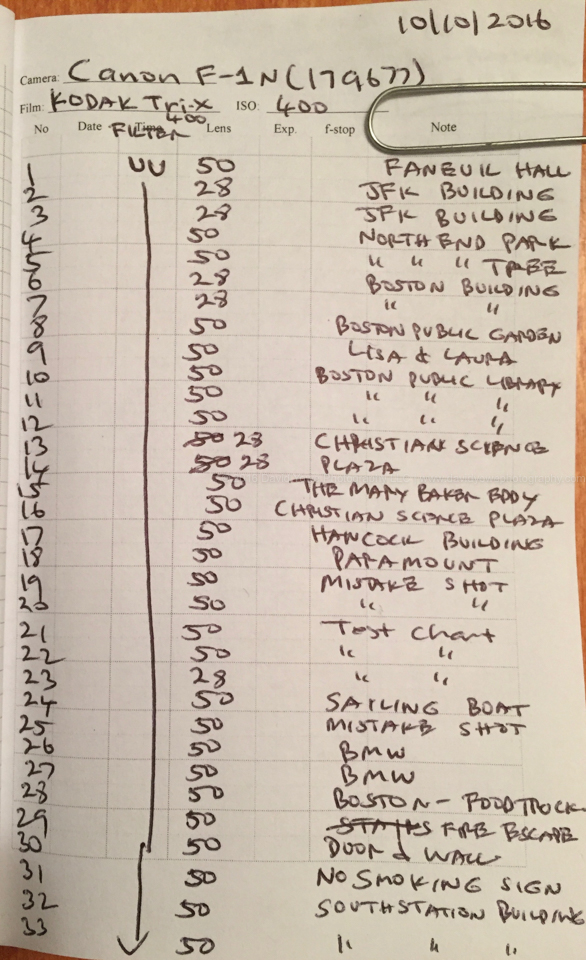 An important accessory I found was a note pad designed to record your film settings, since of course you don’t have any EXIF data to look at. Its called the ” Think Then Shoot: A Photographer’s Pocket Notebook” and is available online for only $10 (https://www.amazon.com/gp/product/149966673X/ref=oh_aui_detailpage_o08_s00?ie=UTF8&psc=1).

The next step was to select which type of film to put into the Canon New F-1. I’ve always loved black and white photography, especially high grain and contrast images. So the first roll of film I used was the legendary Kodak TRI-X 400 black and white negative film. Next on the list is Kodak Porta 400, Ektar 100, T-Max 100, and T-Max 400; as well as films from other brands including Ilford and Fujifilm. Looking forward to trying all these films.

Up to now I’ve picked the camera, lens, and film. The next step was to work out where to get the film developed and how to scan the negatives. Since its peak in the early 2000’s, film had seen a huge decline due to digital cameras. Despite this, film photography is making a resurgance and their are many online and local options for getting film developed. After weighing up the pro’s and con’s including developing cost, shipping cost and chance of being lost in the mail (if online), turn-around time, reputation of the film developer etc.; decided to use a local film developer in Boston. The cost per roll of film was about $10 for processing and $10 for enhanced scans (2048 x 3072) which is competitive with online prices. It also allowed me to hand-deliver the film and to pick-up negatives and a CD of the scans later. The scans are also uploaded to the web and the link is sent to your e-mail address. Turn-around time was about 1 to 3 days from dropping off the film and receiving the online link for the photo scans. I’m also considering scanning the negatives myself, but still thinking about the value of buying a scanner and the time needed to scan the film.

Hope you enjoyed reading about why and how I got back into film photography. I think film and digital photography can co-exist and each have their place. The next blog will be about shooting my first roll of film in about 15 years. Thanks for reading.