Morning practice and afternoon qualifying sessions were planned for the Formula One USGP at the Circuit of Americas on Saturday (October 24). For the second day in a row, torrential rain from Hurricane Patricia had a major impact on the schedule, track facilities, and fans. But some things happened in pit lane during the “qualifying session” which put smiles on everyone’s faces. Hope you like the photos.

Due to the inclimate weather and for safety reasons, the gates to COTA were closed until 12.00 noon. The fews fans that made it into the track were asked to seek shelter in the main grandstand. However, morning practice still got underway at 10 am.

Covered this session at the Esses on the outside of the track from Turns 3 to 5. It was amazing to see the cars fly through the Esses on a wet track with the rain pouring down and water spraying from the wheels and “rooster tails” from the back of the cars.  I remember saying to myself ” this is what I live for”. Here’s a sequence of shots of four-time world champion Sebastian Vettel in the #5 Scuderia Ferrari SF15-T speeding through the Esses. You really appreciate the skill of these drivers when you see them on the track under these challenging conditions. 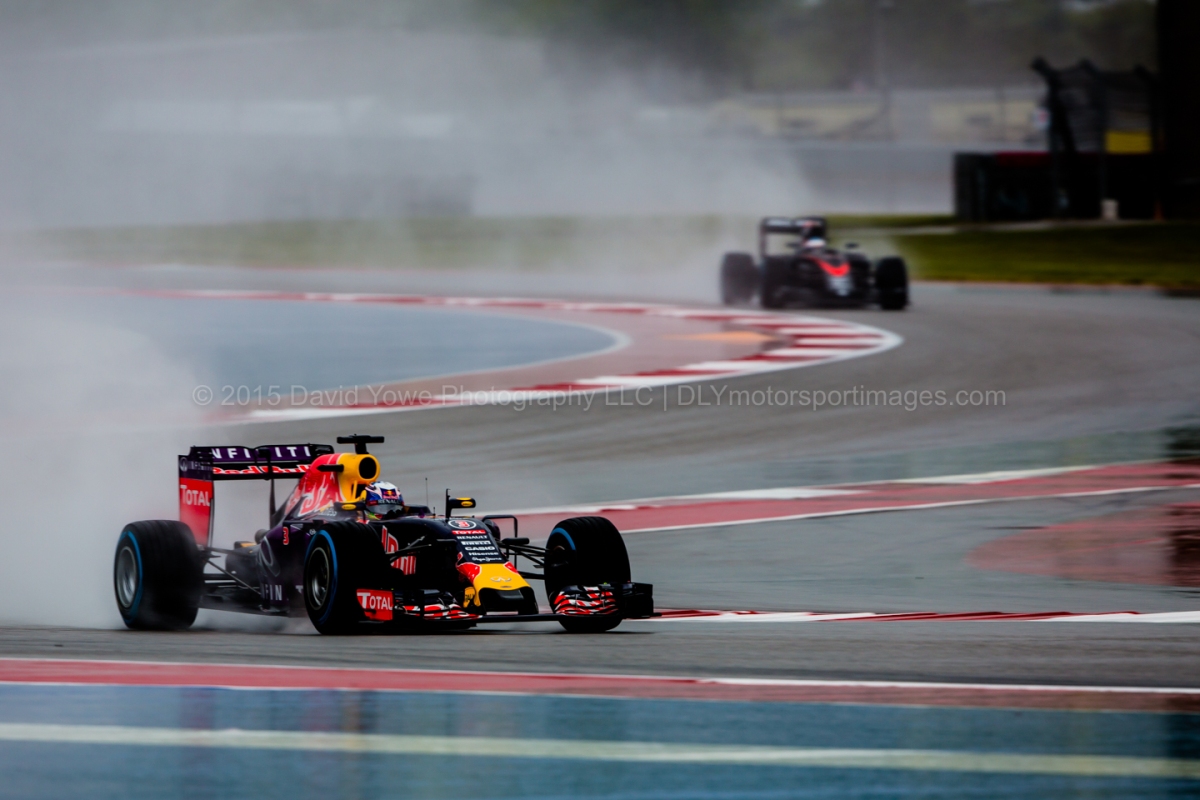 Nico Rosberg in the #6 Mercedes AMG Petronas Formula One 1 W06 Hybrid took a spin and hit the safety wall.

Lewis Hamilton in the #44 Mercedes AMG Petronas Formula One 1 W06 Hybrid. The reflections made the track look like an ice rink, and probably felt like one as they sped across the wet surface. 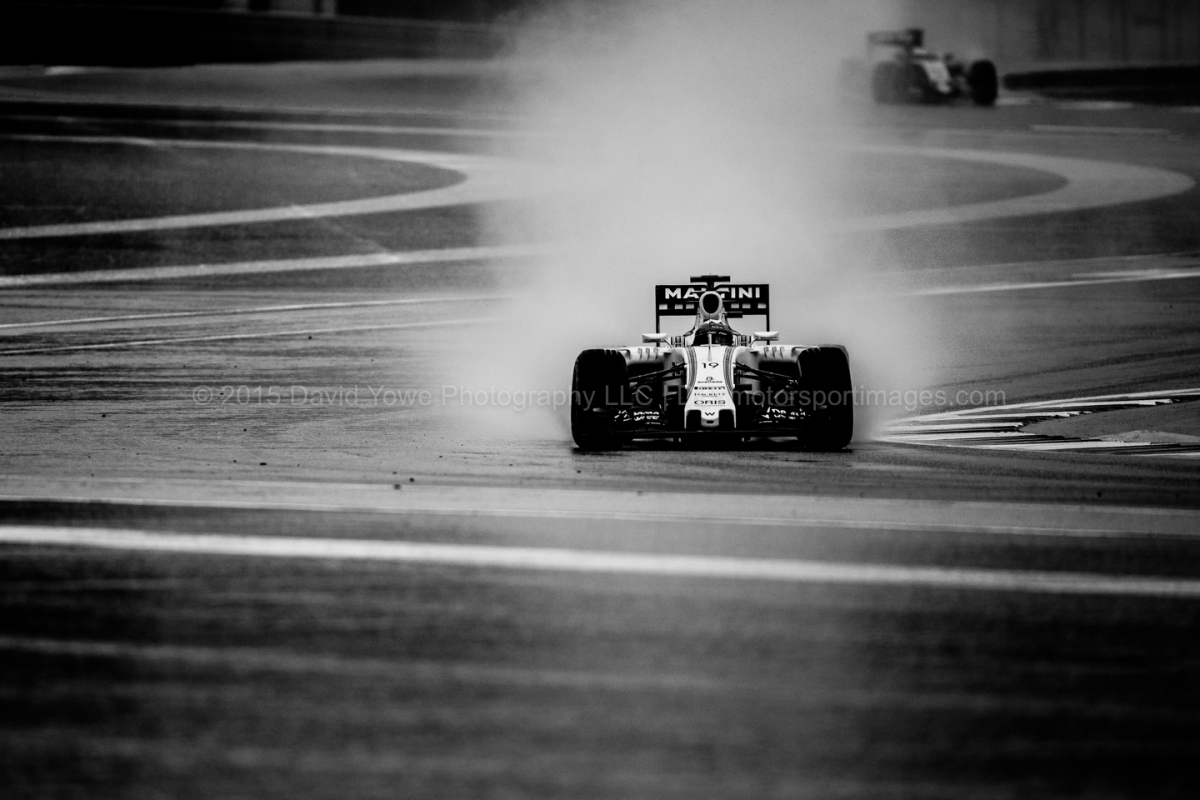 Felipe Massa in the #19 Williams Martini Racing FW37. Looked like he was coming straight at me.

The red brake light on the Infiniti Red Bull Racing RB11 looked like a fighter-jet afterburner. 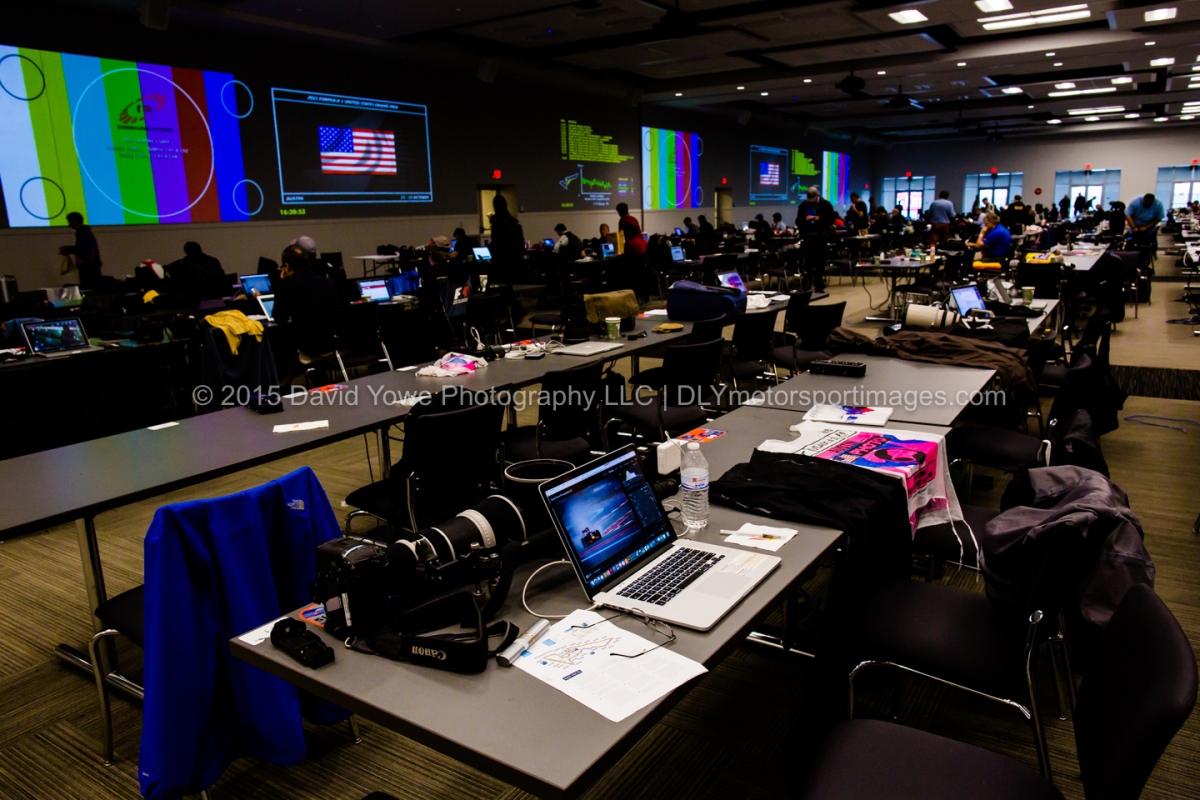 The rain got steadily worse as the day progressed with the 1.00 pm qualifying session delayed at 30 minute intervals until around 4.30 pm it was decided to postpone qualifying until 9 am the next day. During this period I stayed in the media center to work on my photos and to dry out. Brave race fans continued to stay at the track during the afternoon and the drivers and teams in the pits did there best to entertain the fans. Seeing Daniel Ricciardo and Daniil Kvyat from Red Bull Racing dancing in pit lane put a smile on everyones faces and brought applauds in the media center when they finished. Sauber and Force India raced make-shift boats down pit lane, whilst the Williams pit crew sat in front of there garage in a row boat formation. Was also cool to see Nico Rosberg and Niki Lauda play soccer with there crew. The fathers of Jos Verstappen and Carlos Sainz put on Toro Rosso fire suits and got into their sons F1 cars. After the qualifying session was postponed the pit lane was opened so fans could visit the garages. Here’s a link and photos from NBCSports on one of the best “qualifying sessions” I’ve seen.

Smiling Through The Rain II: US fans’ resolve shines on Saturday